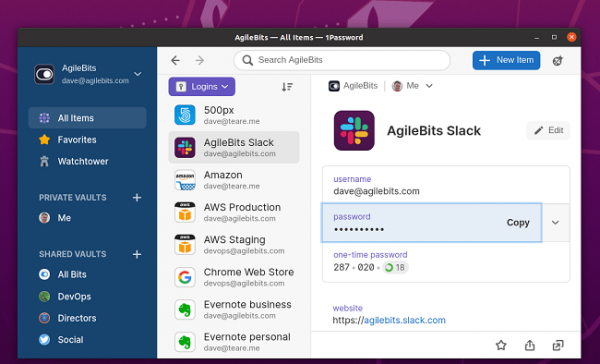 Back in August, we told you about some very exciting news — 1Password had come to Linux… as a development preview. Yeah, it was a pre-beta release, but still, it was a huge win for the Linux community overall.

1Password is an extremely popular password management service, available for Mac, Windows, Android, and iOS/iPadOS. Bringing it to Linux makes the software truly cross-platform. Not to mention, it says a lot about the growing popularity of Linux that Agilebits found it beneficial to assign precious resources to its development.

And now, 1Password for Linux is finally available as a beta. While a stable version won’t be available until 2021 at the earliest, this beta variant should hopefully prove more reliable than the previously-released development preview. Of course, as it is still pre-release software, you should absolutely expect bugs. But hey, testing, finding bugs, and reporting them is sort of the pointy of a beta, isn’t it?

“Our new app is built to meet the security and performance expectations of Linux users. Its backend is written completely in Rust, a secure systems programming language that has made a lot of waves in the Linux community. We’re especially proud to be using the incredible ring crypto library to power the end-to-end encryption that keeps your data safe,” says Dave Teare, Agilbits.