After telling you about the return of the OC Formula aSRock’s range, the brand is doing the fo-folle. The manufacturer is thus declining its series on the graphics card sector with a first model stamped RADEON. Indeed, ASRock teases on a RX 6900 XT OC Formula, one hell of a block! 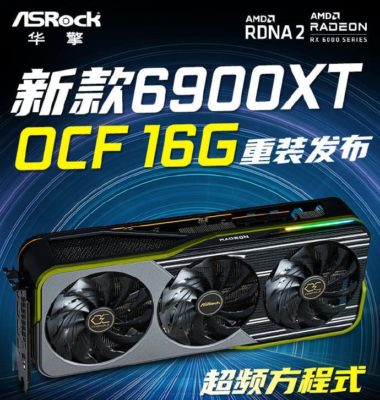 After the motherboard, it’s time for the graphics card and for that, ASRock turns to AMD. Thus, the Taiwanese brand strongly customizes the RX 6900 XT by adding a big triple fan heatsink. The latter will also occupy a significant space inside your case since it also occupies three slots… Well, given the monsters that come out lately, we would be tempted to say that it is commonplace.

Furthermore, the card takes up the color theme brought by the Z590 OCF of the brand. We have a small yellow/lime green border running along the fairing. Now, you may think this is silly, but this border and the rounded corners briefly remind us of the curves of Nvidia’s RTX 3000 FE.

Next to that, we have a power supply part that looks quite solid based on three 8-pin PCIe connectors. On the other hand, this configuration is nothing too exceptional on the custom RX 6900 XT. What will really set this model apart from the others will be its power supply circuitry as well as the care given to its heatsink. As for the OC, it can be touched up and a good overclocker will have no trouble making it dirty as long as the rest holds up.

In short, all that remains is to know the rest of the characteristics of this model. For now, the frequencies are under silence, as well as the PCB and the features specific to this model. Patience, patience..