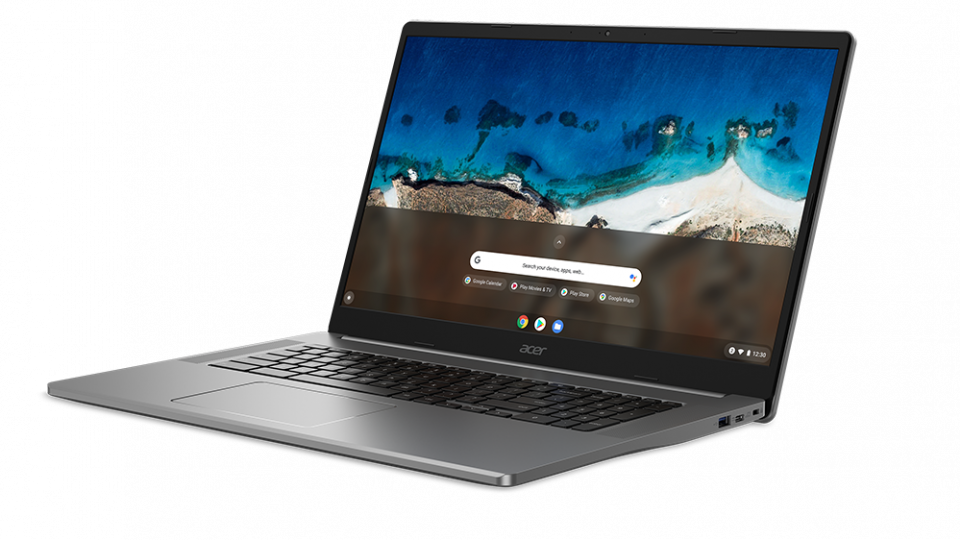 A lot of screen for not much money, but don’t expect miracles from the spec

Amazingly, it’s taken over a decade for the first 17in Chromebook to arrive on the market. Maybe it’s taken that long for people to realise that Chromebooks could be viable desktop replacements, or maybe it’s only now that there’s demand for anything above the standard 15.6in size. Either way, the Acer Chromebook 317 is here, and it’s on a mission to dominate your desk or kitchen table.

Acer Chromebook 317 review: What you need to know

Curiously, the first 17in Chromebook doesn’t sit in one of Acer’s high-end or mid-range Chromebook lines but in the cost-conscious 31x series. That means it has a relatively low-end Intel Celeron processor, 4GB of RAM and slightly lower-grade connectivity than you’ll find on, say, the newest Chromebook 514 (CB514-1W).

There are no other 17in Chromebooks, so for competition we have to look to the 15.6in Chromebooks out there. For my money, the best is the 15.6in Asus Chromebook Flip CX5; a convertible model with an 11th gen Intel Core i3 processor, 8GB of RAM and a good Full HD screen.

However, it’s relatively expensive at £599, while the Chromebook 317 can be yours for just £349. At that price, the closest alternatives are Acer’s own 514– and 515-series of Chromebooks and the cheaper but rather dated Asus Chromebook 523.

Any 17in laptop will feel big and cumbersome, and the Chromebook 317 is no exception. While there’s some attempt to bevel away the bulk around the edges and give it a more wedge-shaped profile, this is still a large, flat slab of a laptop, complete with chunky bezels surrounding the screen that measure between 9mm and 24mm.

As with most recent Acer laptops it has a metal lid but a silver-coloured plastic deck, with a massive, flat wristrest surrounding the touchpad, a full-sized keyboard and up-firing speakers placed to either side of this. 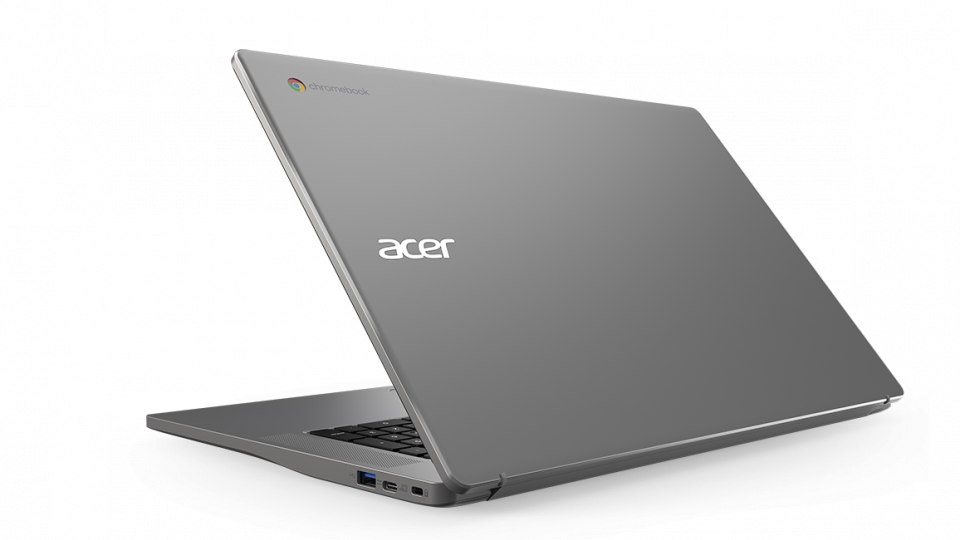 It doesn’t feel cheap and is, for the most part, sturdy, with just a bit of flex if you assert some pressure in the centre of the keyboard. The lid stays firm if you twist it, and the hinge does a solid job of holding it in place at any sensible angle. The worst thing you can say about the design is that most of its 2.2kg feels set towards the rear, which might cause some anxiety if you’re using it on your lap.

Connectivity is a little disappointing given the size of this beast, with a USB-C 3.2 port on either size accompanied by a USB-A 3.1 port, plus a microSD card slot and an audio jack on the left-hand side.

It would have been great to see an HDMI or Ethernet port, but you can connect to a monitor via DisplayPort or HDMI from the USB-C port on the right-hand side. What’s more, the Acer surprised me by providing support for Bluetooth 5.1 and Wi-Fi 6 – it’s always great to see the latest wireless standards in a budget machine like this.

The Chromebook 317’s touchpad is a good match for the size of the screen, measuring a whopping 125 by 83mm. It’s plastic rather than glass but smooth and very responsive, handling scrolling gestures, double-fingered taps and swipes without any faults.

The keyboard isn’t bad, either. The action isn’t as crisp as on the new Acer Chromebook 514 (CB514-1W) and it feels a little inconsistent across the surface, but it’s big and spacious with a full numeric keypad and separated cursor keys.

If I was being picky, I might point out that the numeric pad crowds the return and backspace keys, but there’s nothing here that you can’t get used to and the size of everything, including the wrist rests, means that the ergonomics are better than on most low-cost Chromebooks.

The high points of the Chromebook 317’s IPS screen are that it’s really big and surprisingly bright. Indeed, it seems brighter than the 249cd/m² peak brightness we recorded during testing might suggest.

The low points are that it doesn’t look as crisp or sharp as the screens on smaller Chromebooks, while the colour reproduction isn’t all that great. The screen covers a drab 60% of the sRGB colour gamut, and the average Delta E colour variance measure is an uninspiring 6. These aren’t terrible results and are pretty typical of entry-level Chromebooks, but the effects are more noticeable on such a big display. 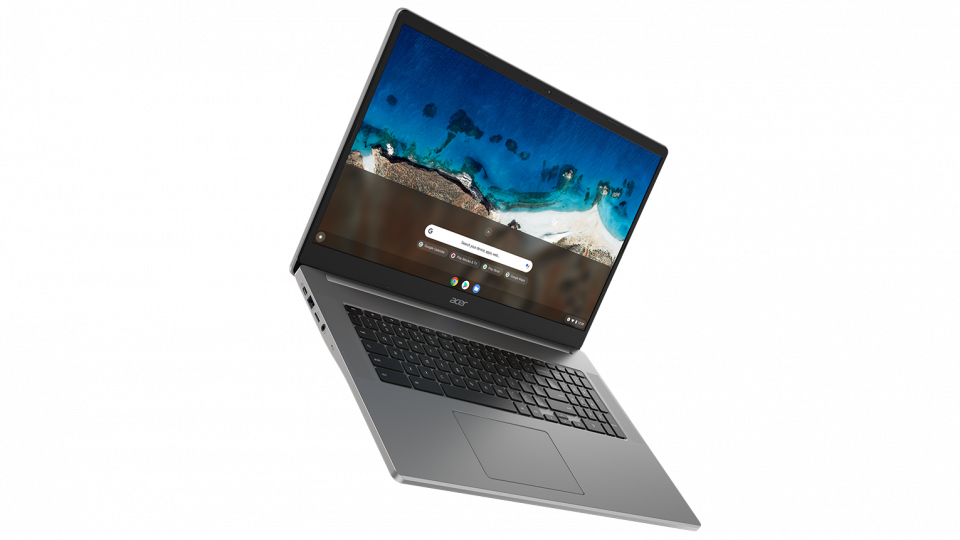 On the plus side, when you’re working across multiple Google Docs documents, Chrome windows and Sheets spreadsheets, that extra size really comes in handy. You can have several windows open or flick between tabs and still see what’s going on.

It’s hard not to be underwhelmed by the 317’s sound, however. The big speaker grilles promise something weighty with good separation but, while there’s a decent stereo spread, the output is tinny and lacking in body or low-end presence.

The biggest indicator of the 317’s low-end price is in the spec. Here, we’re looking at the Celeron N4500 CPU Intel introduced in early 2021, with 4GB of RAM and 64GB of eMMC storage. The CPU is a dual-core, dual-thread effort running at 1.1 to 2.8GHz and, while its single-core performance is better than the older Celeron and Pentium N processors, its multicore performance isn’t all that hot. 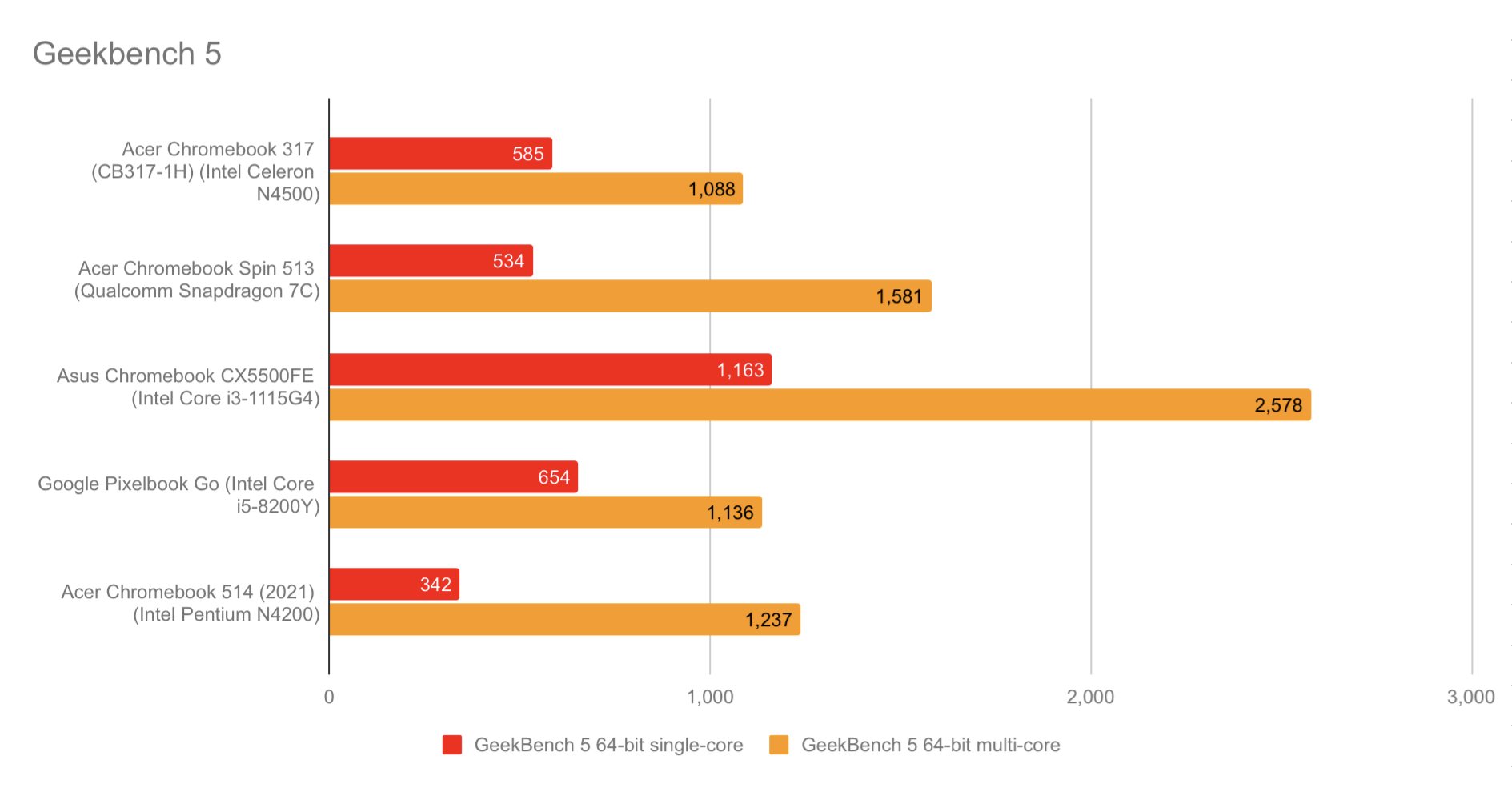 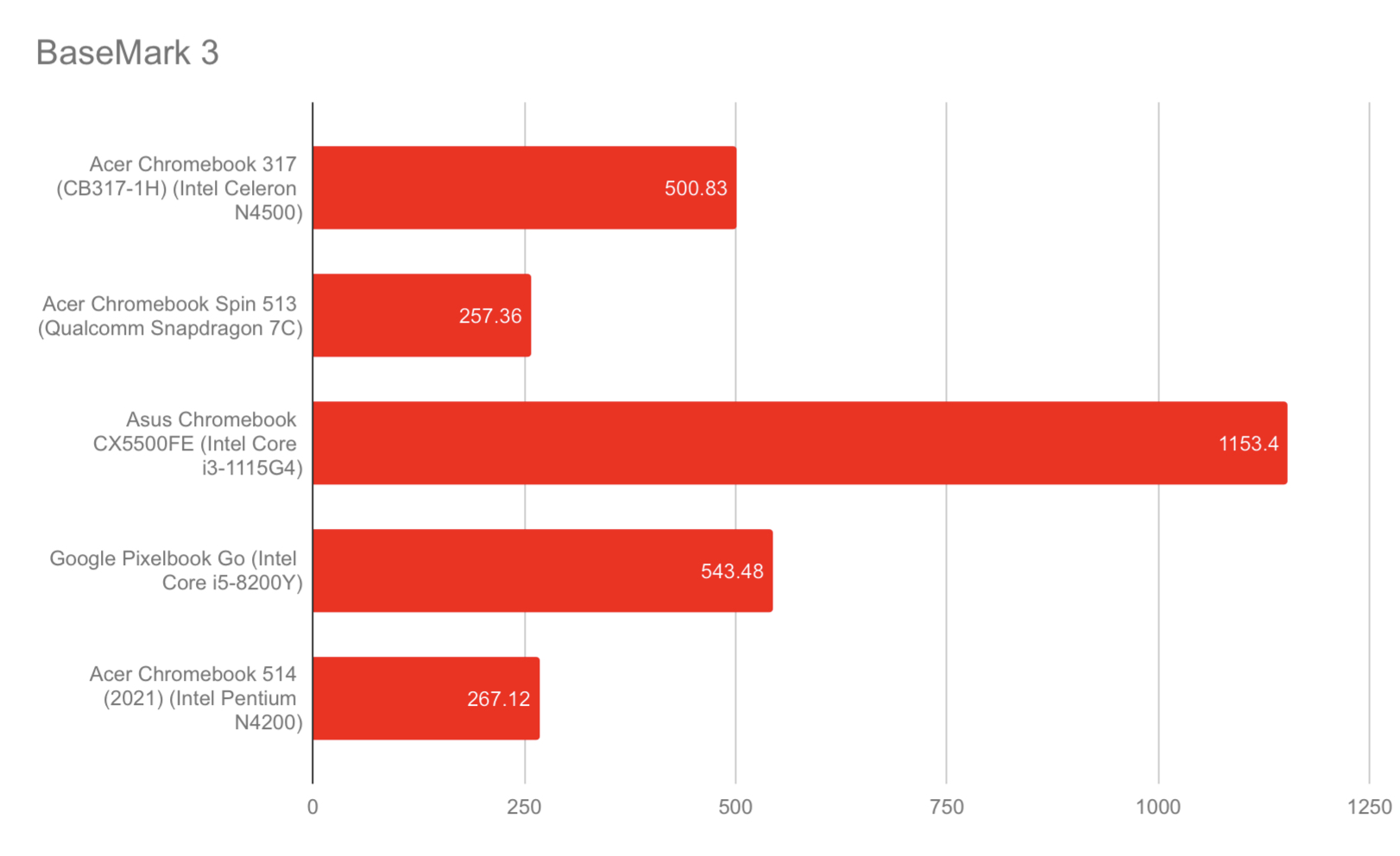 In the benchmarks that best simulate web-based apps, BaseMark 3 and CRXprt 2, the 317 scored a much more credible 500.83 and 75 respectively, putting it ahead of both the Chromebook 514 and 513. It also trumped both in our multitasking test, reporting a Speedometer benchmark result of 72 while playing 4K video and running the MotionMark 1.0 in the background. Here, the Chromebook 514 and Spin 513 could only manage 45.1 and 66.7 respectively, so the Chromebook 317 doesn’t put in a bad performance overall. 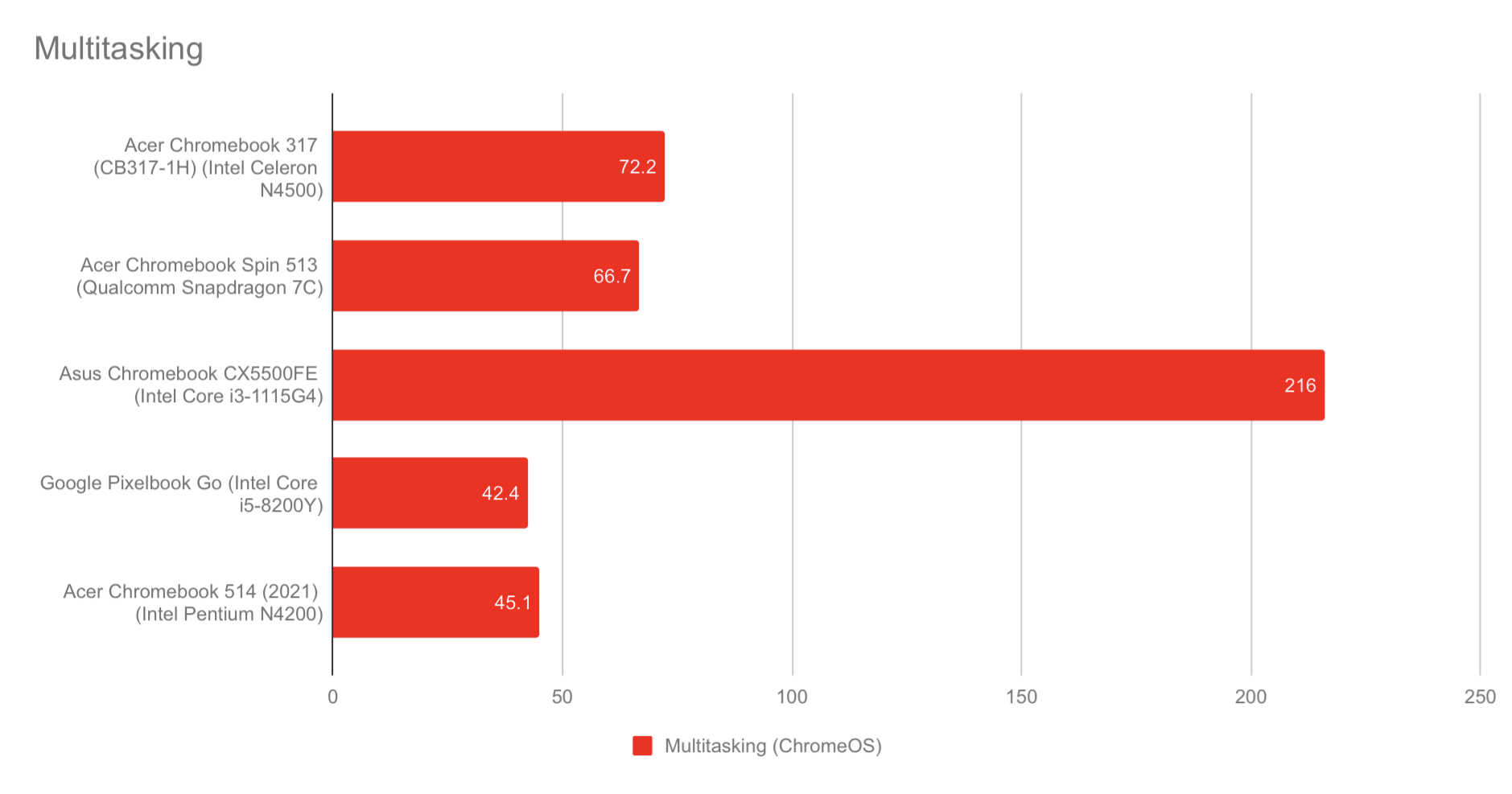 All the same, these results still put the Chromebook 317 in the lower level of the Chromebook rankings, and a way away from newer mid-range devices with Pentium Gold and Core i3 CPUs. In practice, it’s fine for web browsing, light image editing and productivity tasks, but run a handful of apps simultaneously, or keep a dozen browser tabs open, and you’ll notice a momentary pause when switching between them that you wouldn’t spot on a faster device. If you want a quicker, slicker Chrome OS experience, you’ll need to spend more. 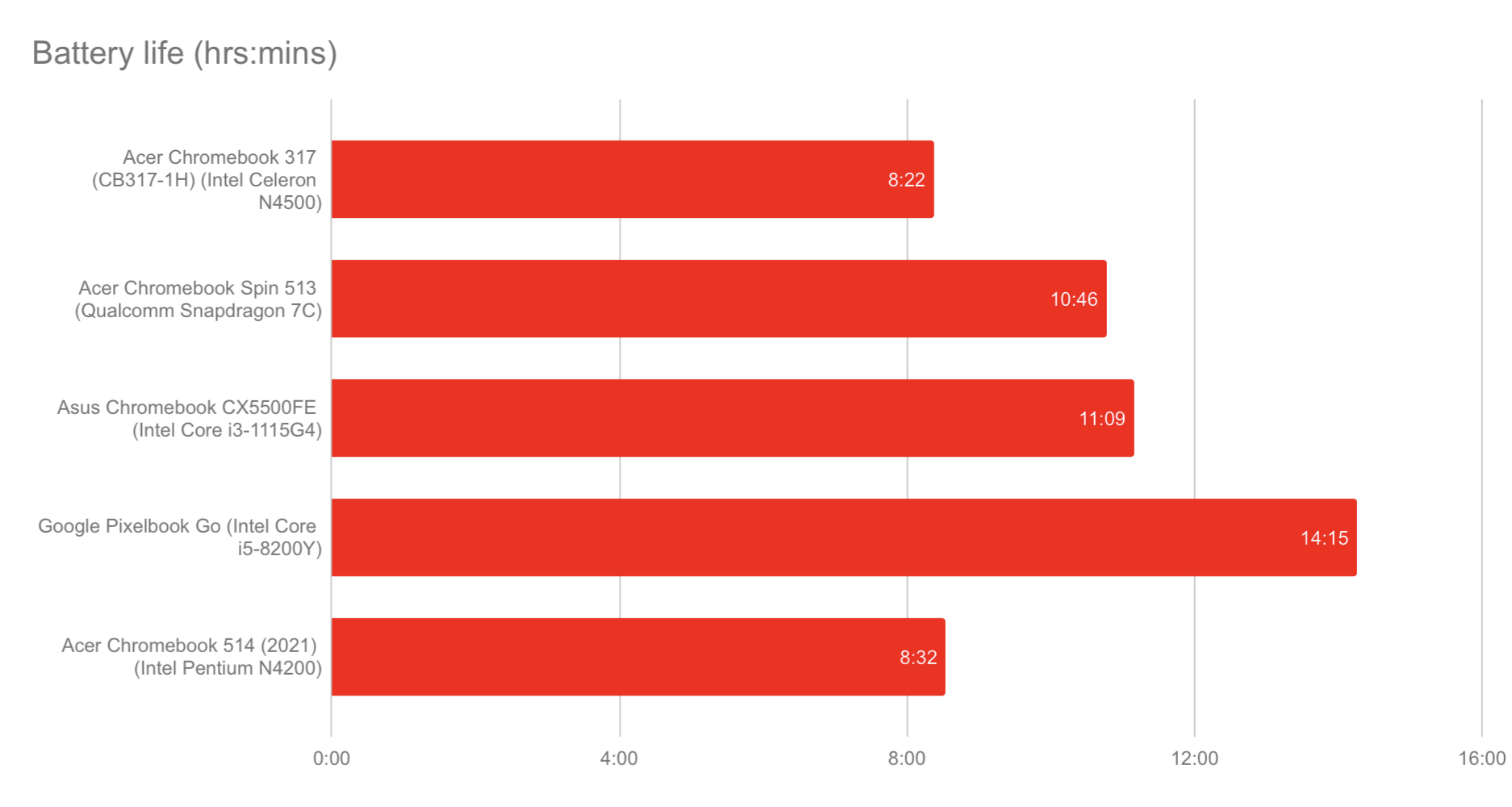 Big-screen Chromebooks used to be synonymous with woeful battery life and, lasting 8hrs 22mins in our looping video test, the 317 is no superstar on this count. However, that’s still enough for most of a working day away from the mains, and this isn’t really the kind of device you want to lug around more than you have to.

The Chromebook 317 is a slightly odd beast. The bigger screen and desktop replacement form factor cry out for a high-performance spec but the Intel Celeron N4500 doesn’t have the cores or the firepower of the faster Intel Pentium Gold, Intel Core i3 and Intel Core i5 CPUs, and Acer hasn’t backed it up with 8GB of RAM or a speedy SSD. It’s usable, but we’d like it to be powerful and, I suspect, the 4GB of RAM might not be enough as time goes on.

All the same, it’s impressive that you get so much Chromebook for so little cash, and the 317 would be a great option for light office duties or home study, partly because the bigger screen and keyboard make it a more comfortable device for everyday use. It’s worth considering, then, even if you can’t help wishing that it had the grunt to match its mighty size.