Acer announced the Spin 514 Chromebook just ahead of CES this year. This Ryzen-powered Chromebook with AMD graphics aims to put an end to the popular belief that Chromebooks aren’t performance machines. There’s no doubt Acer is a key OEM in the Chromebook market, so I was excited when they announced this device.

Before picking up the Spin 514, I just finished reviewing the Lenovo ThinkPad C13 Yoga Chromebook. That device also uses the Ryzen 5 processor. In my C13 review I noted a few key bugs with battery life and graphics acceleration. Can the Spin 514 flip (or spin) the script on Ryzen Chromebooks and live up to the hype?

About this review: I received the Spin 514 model with 8GB RAM, 128 GB eMMc storage, and the Ryzen 5 processor from Acer for testing. Acer did not have any input in any part of this review.

Unboxing the Spin 514, it felt a little heavy at first. It turns out, that’s because it’s actually quite heavy for a chassis of this size. At 3.64lbs, this is one of the heavier 14″ Chromebooks you’ll find, quite a bit heavier than the leading models from ASUS or HP. It’s not all bad though, as the Spin 514 feels incredibly sturdy and has a solid aluminum chassis without too much flex. 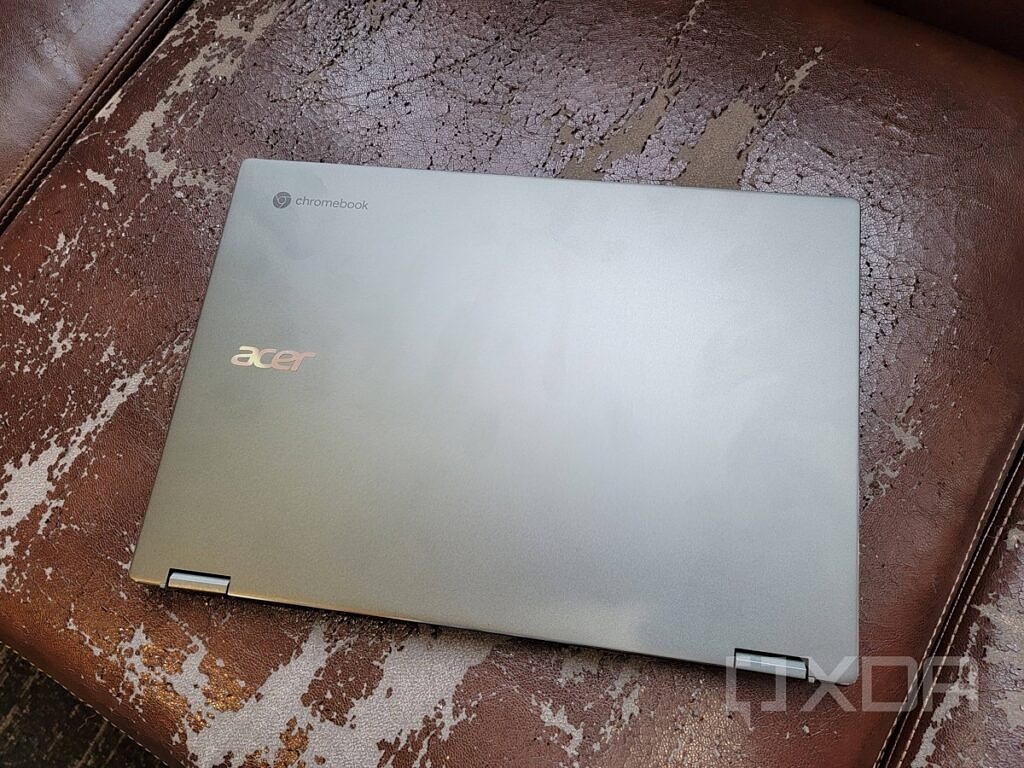 The Mist Green color is quite interesting. This is a new popular color for many products. It looks green, but also grey at the same time. It’s hard to say what color it is really, as it honestly varies depending on how the light shines on the lid. The silver trim around the touchpad on the inside gives a refined elegance to the device, which is subtle but stylish. You definitely won’t stand out in a crowd with the Spin 514, but it’s a nice-enough looking Chromebook. 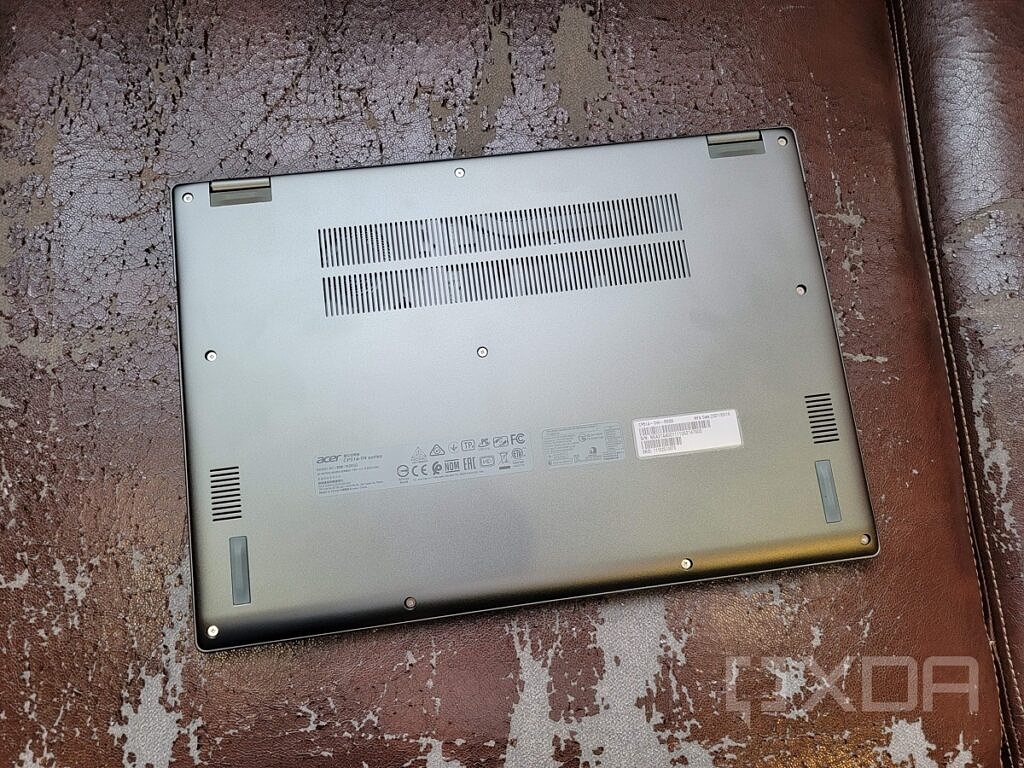 The hinge is also quite strong and keeps the laptop from moving unnecessarily in tent mode. In practice, the weight didn’t bother me too much after a few days since I carry a 16″ Macbook Pro regularly in my bag as well. On the other hand, if you want an ultra-portable Chromebook, this might not be the one for you.

I’m also happy to report the Spin 514 passes the one-handed open test with flying colors. Due to the sturdy design and added weight, you can easily open the lid with one hand while sipping your morning beverage. 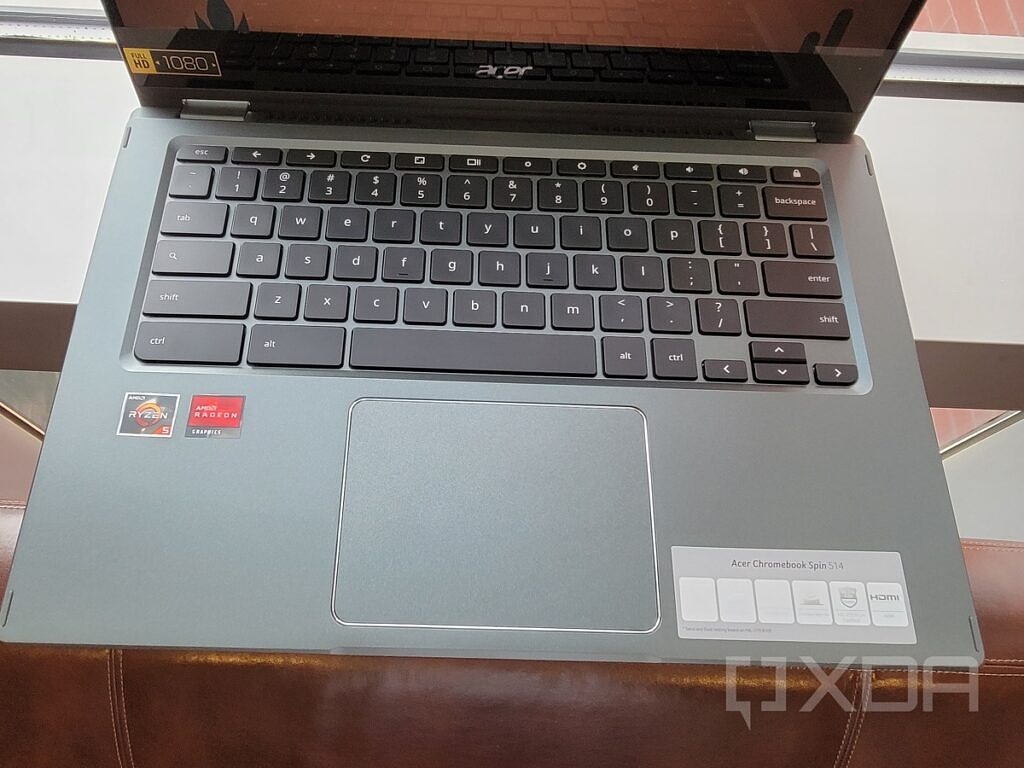 Opening the lid, you get a backlit keyboard with soft-touch keys that are a joy to type on. This keyboard has just the right amount of travel and feels like it belongs on a device with a much higher price. Amazing keyboards aren’t too common on Chromebooks, but Acer did a great job here.

Outside of the ThinkPad C13 Yoga, this is the best keyboard I’ve used on a Chromebook. I was able to type both quickly and accurately while writing articles on the Spin 514. My only small complaint is the backlight is a bit dim on the keyboard, but that’s not a huge deal. 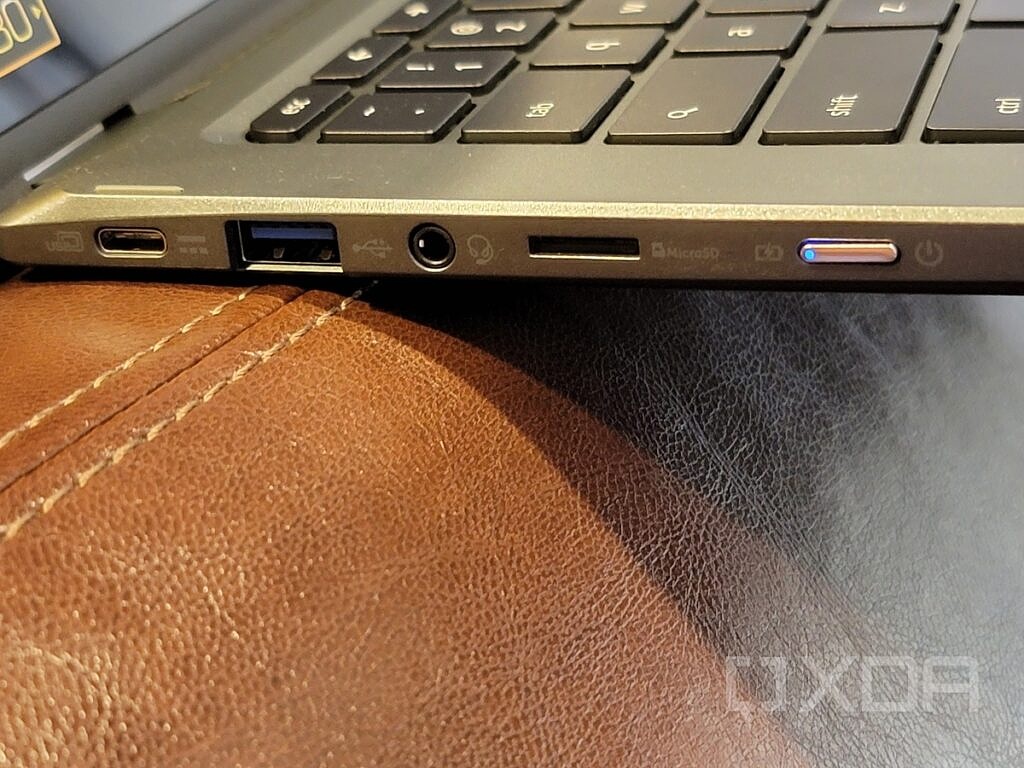 This touchpad is also reasonably spacious for a portable Chromebook. My standard for a laptop touchpad is the MacBook Pro, but this one is a decent size for a 14″ Chromebook. The touchpad area is approximately 4.25 x 3.125-inch. I found navigating webpages with gestures to be smooth. The touchpad also has a satisfying click and doesn’t feel too mushy, an issue I often notice on Chromebooks of this size. 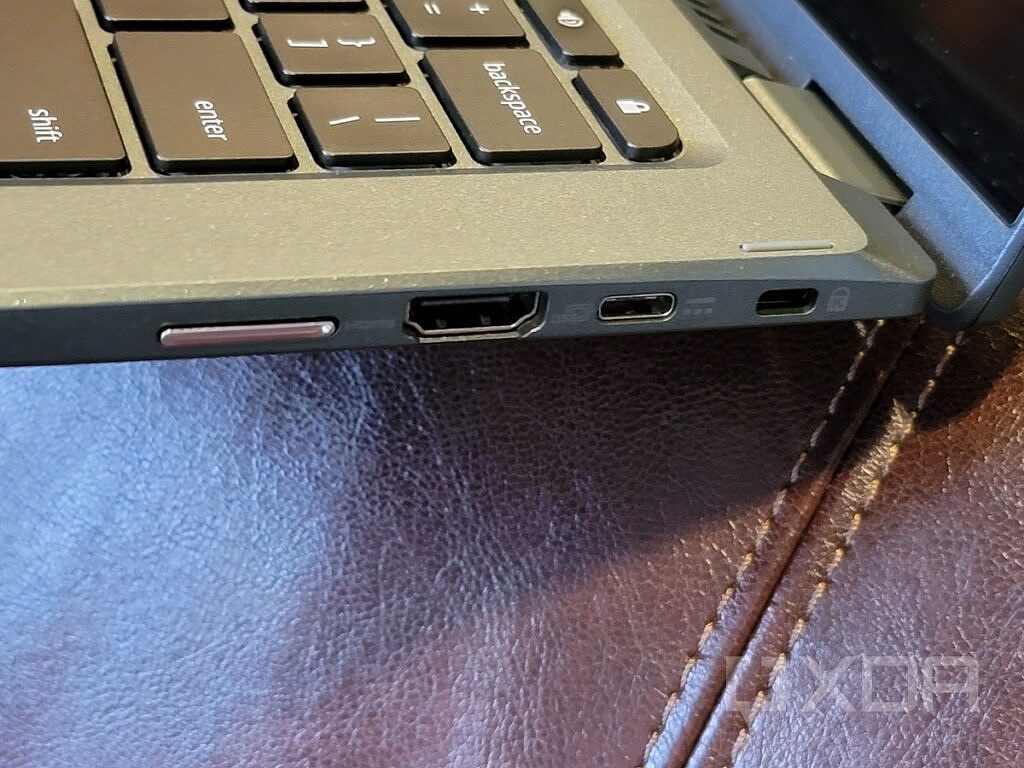 Finally, let’s discuss the available ports on the Spin 513. You get 2 USB-C ports, 1 USB-A port, Kensington lock slot, and a microphone/headphone jack. It’s refreshing to find a HDMI port and microSD slot as well, making it much easier to connect to a wider array of external monitors and expand storage. Keep in mind if you need to add more peripherals, you can always pick up one of the best USB-C docking stations for Chromebooks. 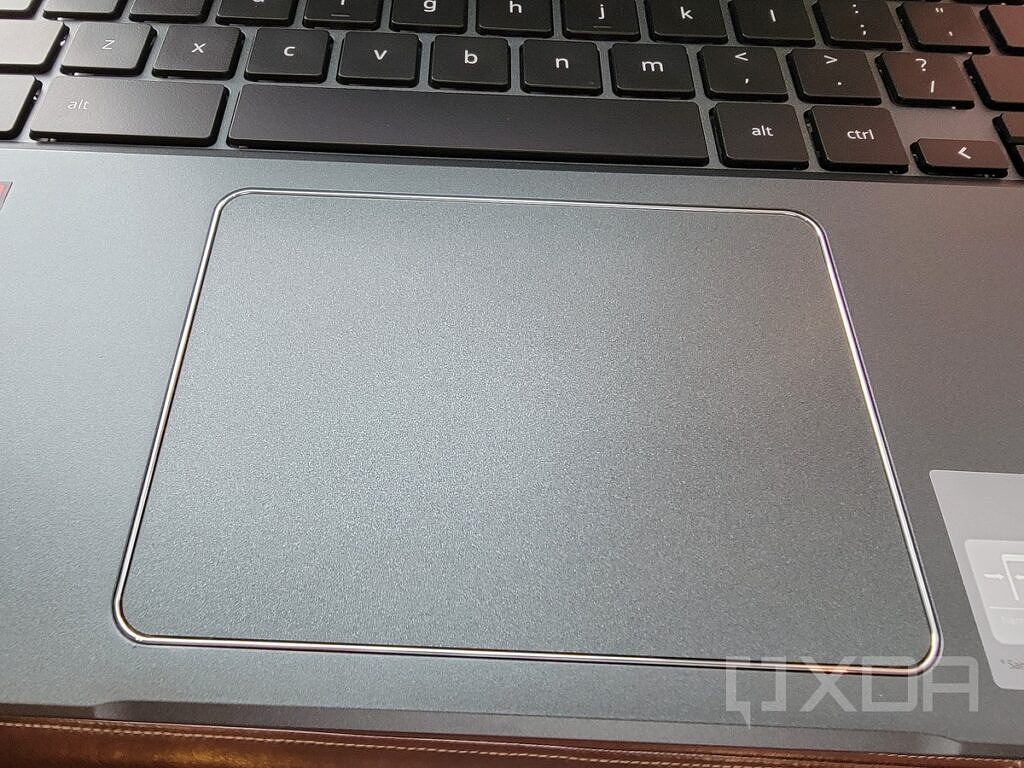 As a whole, Acer did a nice job with the build and port selection on the Spin 514. It’s also MIL-STD-810H certified, meaning it passed rigorous testing for drops, spills, and extreme temperatures. If you need a durable Chromebook that’s borderline rugged, the Spin 514 is definitely one of the better options out there.

The FHD touchscreen display on the Spin 514 is a bit of a conundrum. On one hand, it produces a clear image with accurate colors. On the other hand, the contrast is lacking and brightness can be a problem even indoors.

The peak brightness on my model was around 210 nits, which is significantly below average for Chromebooks in this class. Color quality is a bit more subjective of course, but certain tones looked muted during my Netflix viewing. 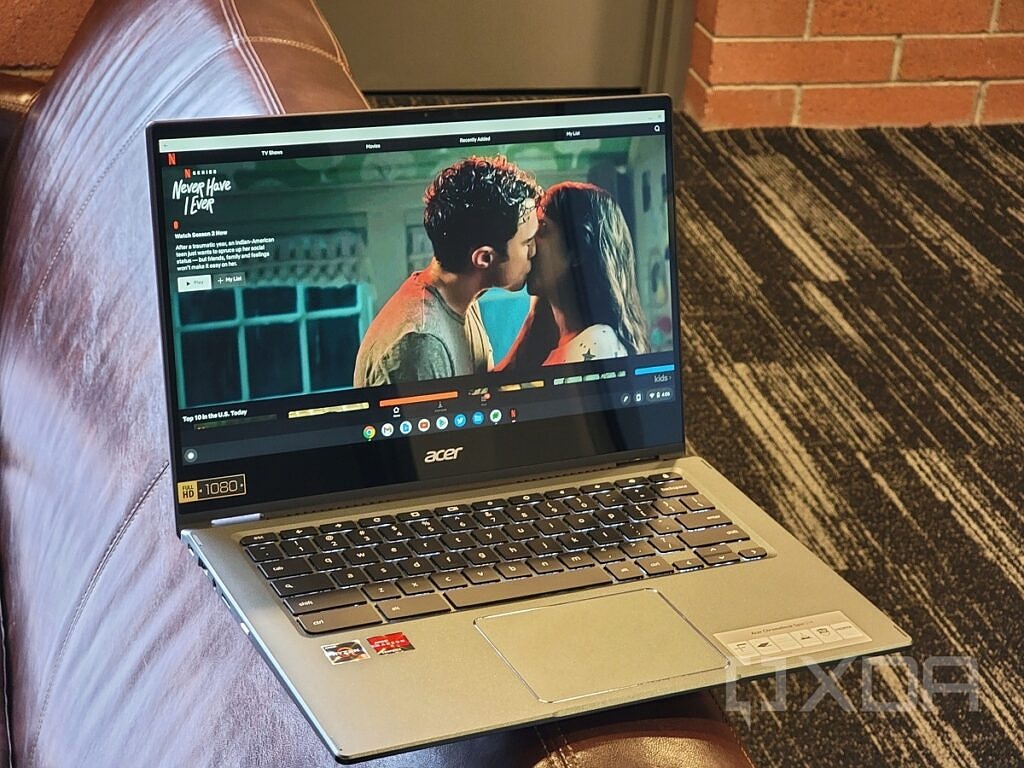 If you move the Spin 514 outside, the display can be a considerable disadvantage. The peak brightness isn’t really enough for direct sunlight. Even if you crank the brightness up all the way to survive, this will significantly impact battery life.

Those that use their laptop in bright environments all day should probably look elsewhere. Both the Galaxy Chromebook 2 and Acer’s own Spin 713 are much better options when it comes to peak brightness and streaming media. 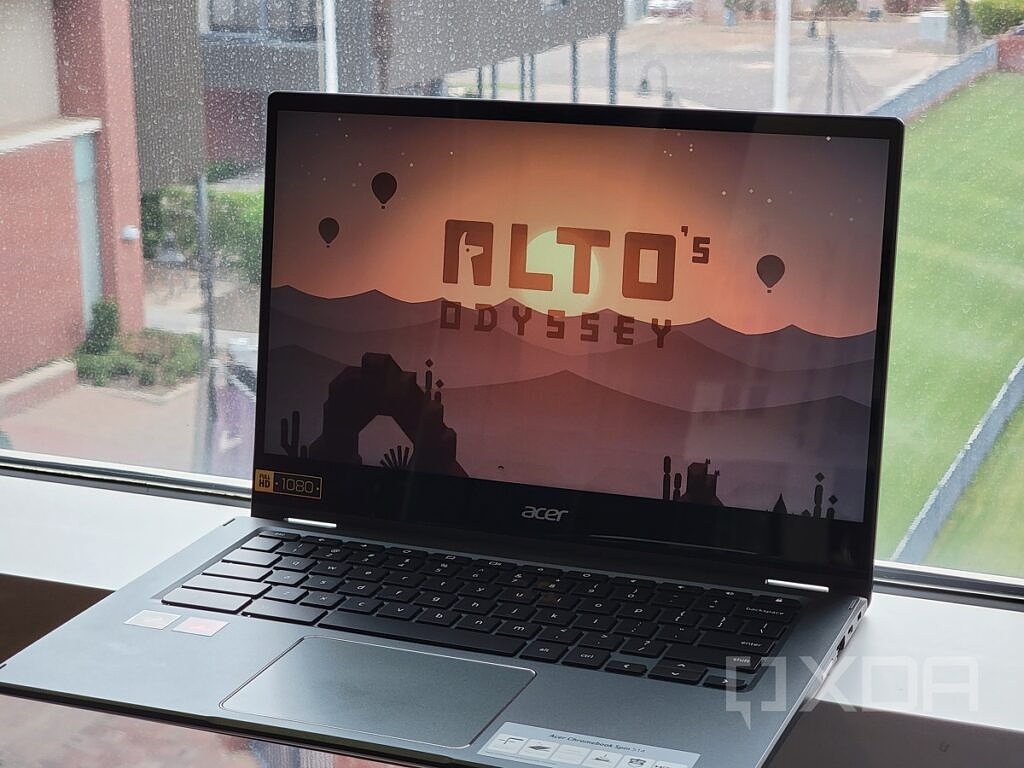 Touch accuracy is good though, with no issues using Android apps in tablet mode. The tent mode is quite sturdy, owing to the aforementioned hefty build. As is the case with many of Acer’s other Chromebooks (like the Spin 513 I recently reviewed), the speakers are the real detractor for media consumption.

You get stereo speakers, but they are bottom-firing which is never optimal. Maximum volume is still pretty quiet and there’s virtually zero bass when listening to music. The audio is passable for the occasional podcast or streaming movies, but make sure you put your headphones on to listen to music.

Performance on the Spin 514 is very solid. You can run Android apps, including intensive games, with relative ease. I spent quite a bit of time playing Asphalt 9, Alto’s Odyssey, and NBA Jam. All of these games played incredibly well on the Chromebook. I also spent considerable time playing Stadia on the Spin 514, an experience that’s rather enjoyable with the laptop in tent mode. 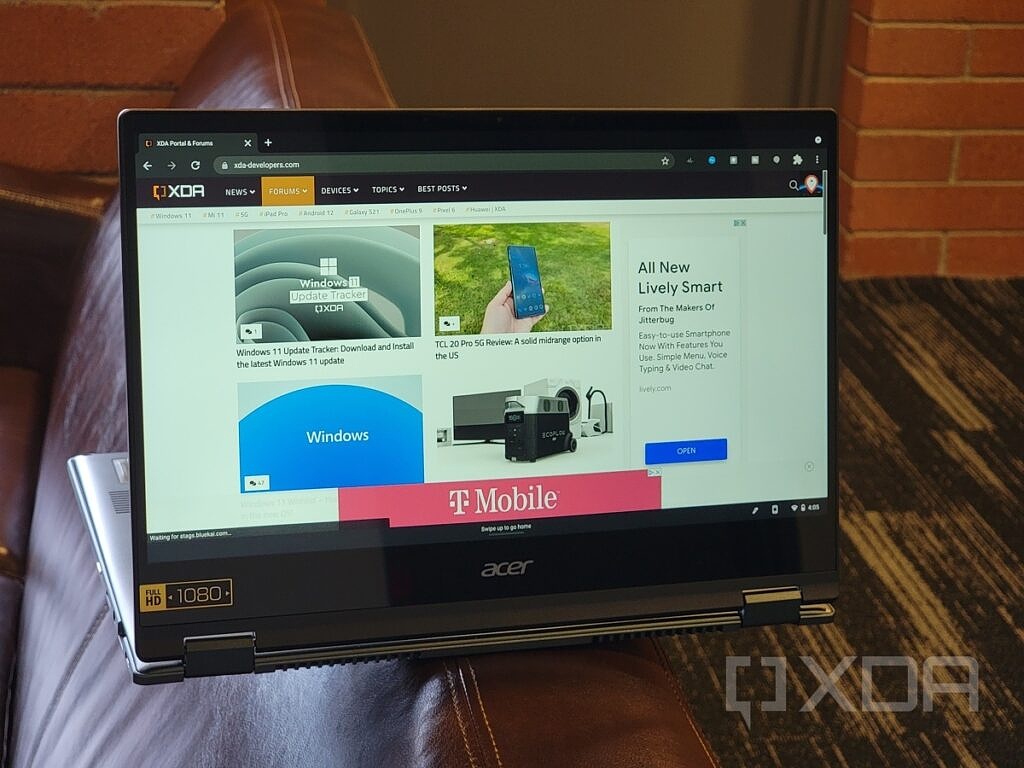 Of course I enjoy running Linux apps on my Chromebook as well, using GIMP and Kdenlive for some light photo and video editing. The Ryzen 5 processor was up to the task in general and I rarely noticed the fans kick in. Unfortunately, the Spin 514 does still suffer from some of the Ryzen-specific bugs I noticed on the ThinkPad C13 Yoga Chromebook.

In the battery life department the Spin 514 is less impressive. This could be because of the poorly calibrated battery gauge I just mentioned, or perhaps because I needed to run on maximum brightness due to the dim display. Either way, I struggled mightily to get the 10 hours of use that Acer advertises on the specs page. I was able to get a maximum of around 7 hours of use during my testing period. That sounds like a decent number for a Windows PC, but it’s fairly bad for a Chromebook. Still, if you really like everything else here you can grab a portable battery charger to make it through the day.

I’d say that Acer succeeded with the Spin 514. They delivered a durable Chromebook with good looks, solid performance, and a very impressive keyboard. The dim display and mediocre battery life are certainly concerns. However, there’s at least some hope that future Chrome OS updates could fix the Ryzen optimization issues and improve battery life. If you’re looking for a rugged Chromebook and don’t mind the hefty size and weight, this is likely one of Acer’s best Chromebooks for you to consider.

On the other hand, you might want to skip this one if you use your Chromebook outdoors all the time or need all-day battery life right now. The Galaxy Chromebook 2, ASUS Flip C436, and Acer Spin 713 all have higher peak brightness and better battery life. They also have slightly higher price tags, so you’ll need a few more pennies in your piggybank. 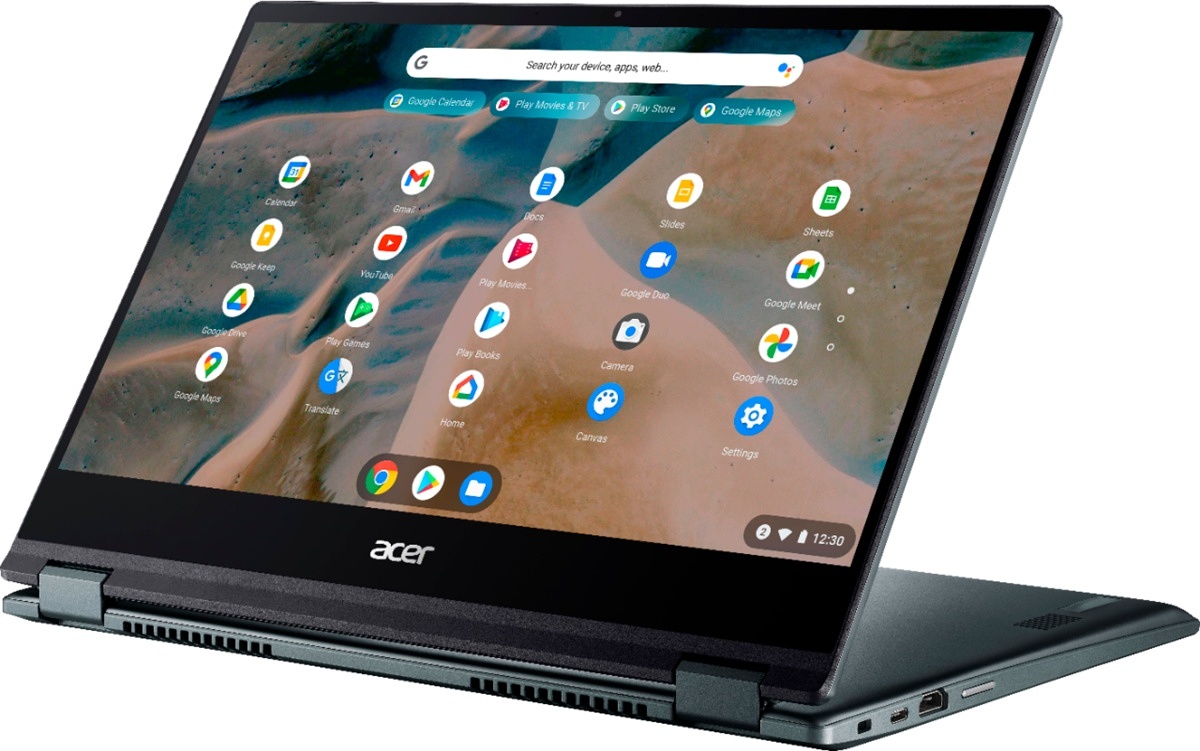 Acer’s Spin 514 delivers a rugged design and impressive performance backed by the AMD Ryzen 5 processor. It suffers from a somewhat dim display and mediocre battery life, but performs like a champ for productivity and Android gaming.