At MWC 2022, Acer introduced two new laptops: The Swift 3 and the more premium Swift 5. After having the chance to try out the Acer Swift 3 a couple of weeks ago, Acer also sent me the Acer Swift 5 so I could take a closer look at it.

To be clear, this is a pre-production unit, so I couldn’t test the performance or run any benchmarks. Not that it makes a huge difference, as you can get a general idea of the performance of Intel’s 12th-gen P-series processors from other laptops. This hands-on is all about getting to experience what it feels like to use the Acer Swift 5. And frankly, it’s pretty great. This is a beautiful laptop and it has some big improvements this year.

Acer announced the Swift 5 back in February, but just like the Swift 3, it’s only planned to launch in June in North America. It’ll start at $1,499, though Acer didn’t specifically say what specs that model will include. If you’re in Europe, it was supposed to launch in March, but we actually can’t find it in any of the major European markets yet.

While you can’t buy it, there is a listing for the Acer Swift 5 on Amazon, which you can keep an eye on if you’re interested in buying it as soon as possible. You can check it out below. 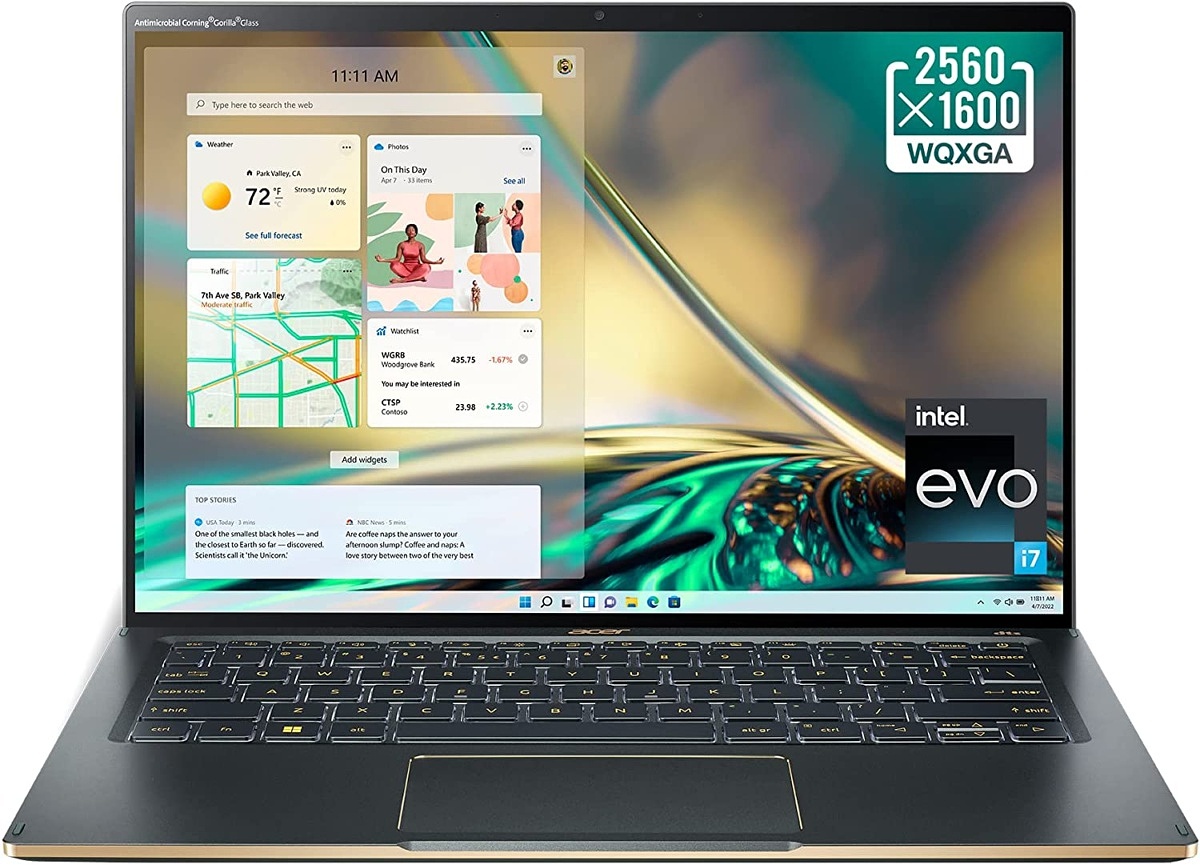 The Acer Swift 5 is a premium laptop with 12th-generation Intel processors and a 14-inch 16:10 display. It also has a beautiful dual-tone design.

In recent years, I’ve grown increasingly tired of laptops (and smartphones) that look more and more subdued. It feels like a lot of devices blend in with the rest, and I’m always more interested in devices that stand out. In that regard, the Acer Swift 5 is truly a breath of fresh air. To be clear, the previous model did already come in this colorway, but it’s nice to see that Acer isn’t going the route of assimilation. 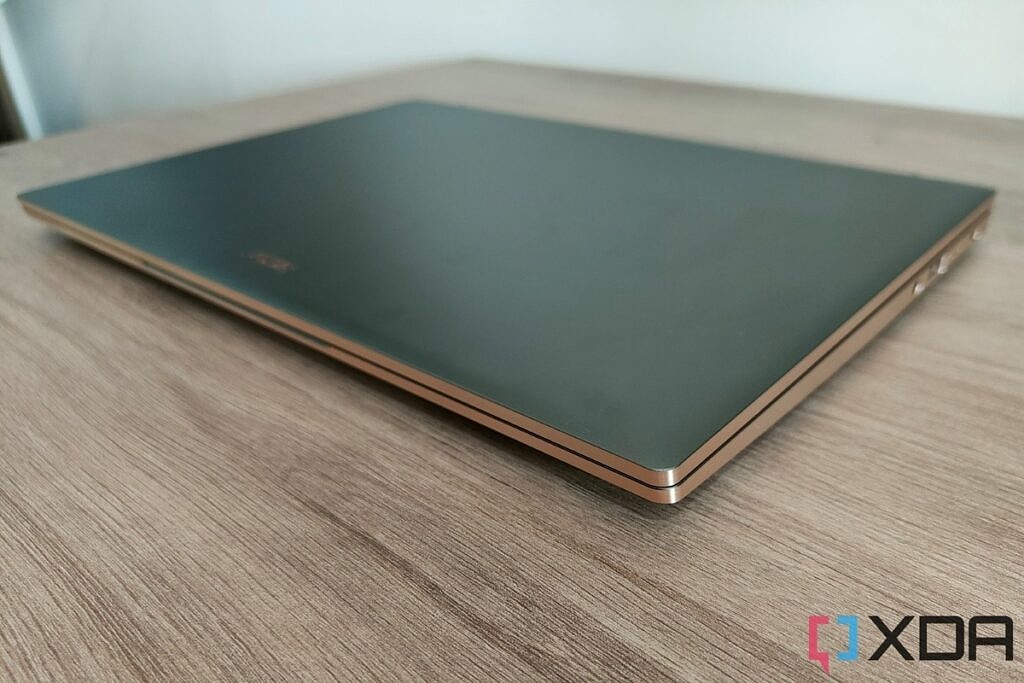 The company calls this model “Mist Green”, and it combines a very dark shade of green, found on most surfaces of the chassis, with pale gold accents, making for a laptop that feels premium through and through. It’s just so pleasant to look at, and all the accents are in the right place to give it just the right amount of flair. It looks lovely, and I hope Acer keeps this design trend alive. I only wish the green undertone was a little bit more prominent – most of the time, the laptop kind of looks grey, and I think a slightly more vivid green could still be subdued enough while being a bit more attractive.

The gold accents are found all over this laptop, including the hinge, around the touchpad, and on the keyboard labels. This is actually one of my favorite things about it, because when the keyboard backlight comes on, the gold glow looks really nice against the dark chassis. I did take a picture of it, but the pictures come off with a very vivid yellow, which isn’t what it looks like in person. It’s a much more subtle gold, and I adore it. 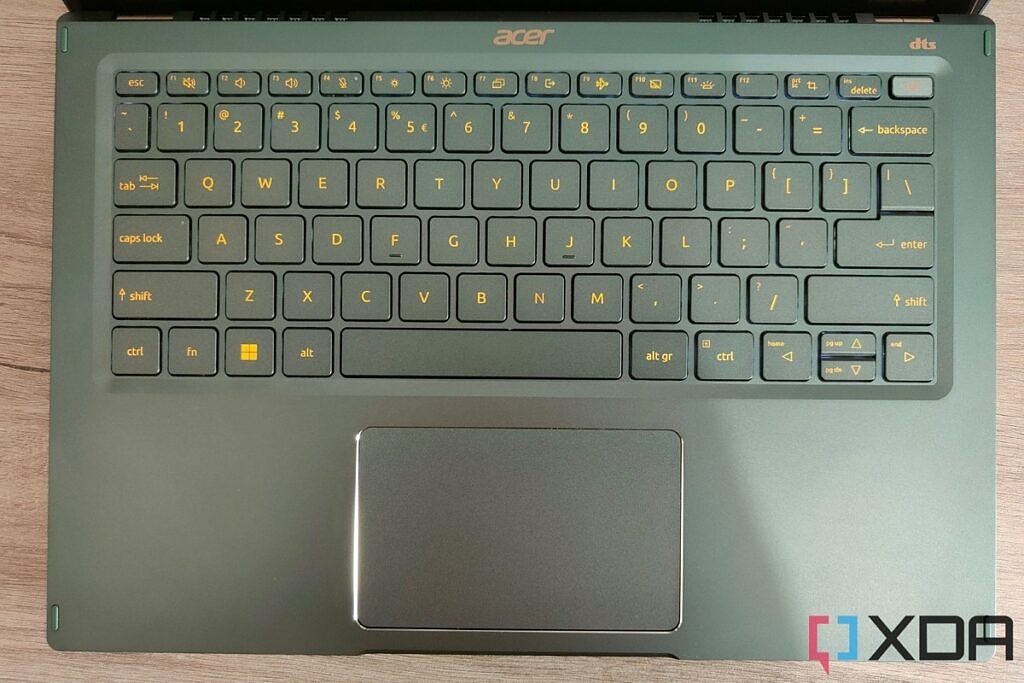 Just like the Acer Swift 3, the hinge of the laptop is designed to raise the keyboard base when the lid is open, which should provide better airflow to keep the processor cool. My unit consistently got loud with its fan, but that might be due to a lack of optimization since this isn’t the final product. One thing I don’t like about the hinge is that it’s nearly impossible to open this laptop with one hand, it’s just too stiff. 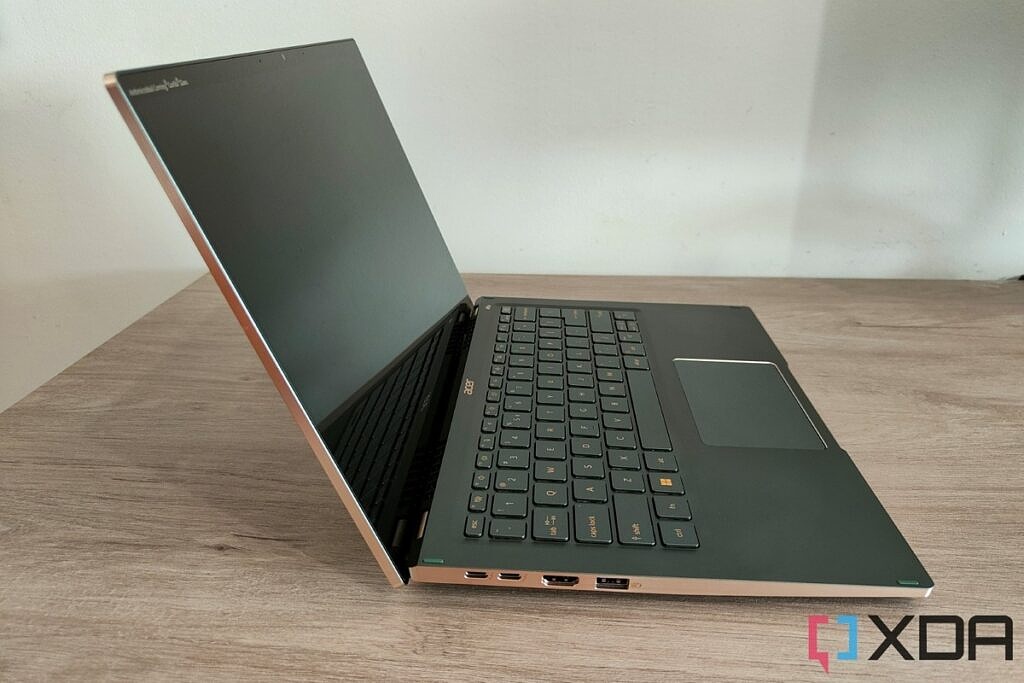 Considering it’s an all-metal laptop and that the screen is covered by glass, the Acer Swift 5 is also decently light. It feels very rigid and durable, but it’s still very portable, and I don’t think I would complain if I had to carry it on my back for a day.

One of the big upgrades that the Acer Swift 5 comes with for 2022 is a new display, now in a taller 16:10 aspect ratio. If you’ve never used a taller display, it might not occur to you why a taller screen is so much better, but many companies have come to realize that it’s what users want, and I’m glad Acer is keeping up. This taller screen means there’s more space for content, especially when working on a long text. 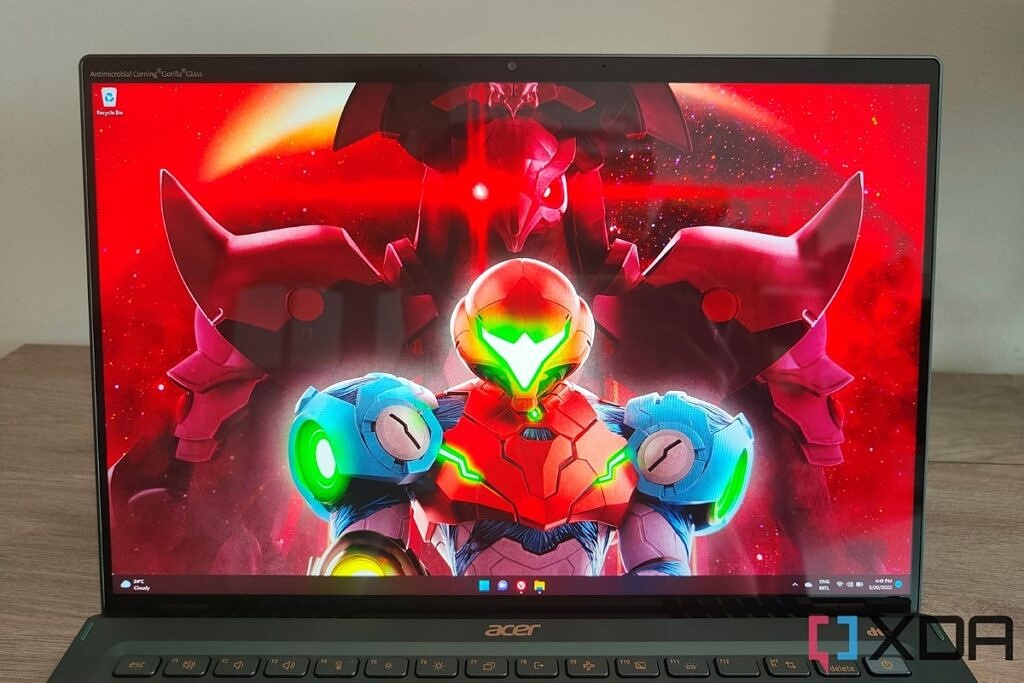 It’s a great-looking display, too. Acer sent me the Full HD+ model, but there’s an even better version with a Quad HD+ panel. That version is also brighter, reaching up to 425 nits, while this one maxes out at 340 nits. Still, everything on this screen looks great and vibrant. I mostly work inside so it’s always been more than enough for my usage. However, I do have to point out that the glass on this panel is very reflective, so it can be a little distracting to see myself so clearly when I’m trying to work.

The Acer Swift 5 also has a feature that I always love having: A touchscreen. That’s probably why Acer protected it with antimicrobial Corning Gorilla Glass, so germs and bacteria don’t grow as you interact with the screen over time. To be clear, this isn’t a convertible, which is what I personally prefer, but a touchscreen is also welcome either way. 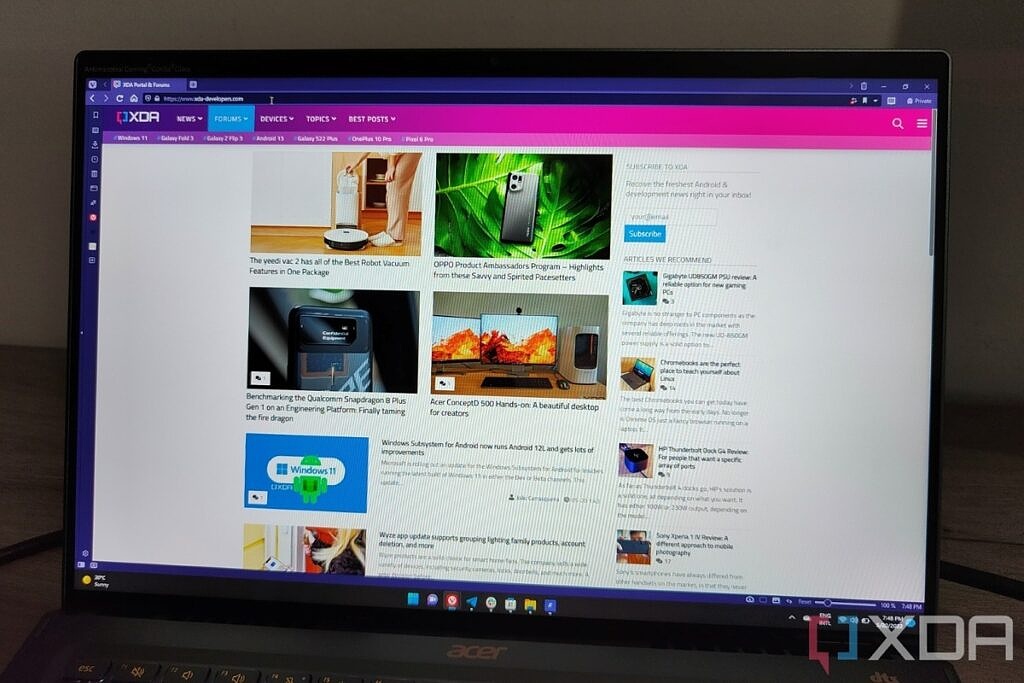 Above the display, there’s another big improvement thanks to the new 1080p webcam. It can actually record Full HD video at 60 frames per second, which is great, and based on my short time with it, video quality is fantastic for a laptop. I said the same about the Acer Swift 3, and I’m certainly glad to see it. I’m one of the (apparently few) people who cared about webcam quality even before remote work became so prominent, so this feels like a long-overdue upgrade.

The speakers on the Acer Swift 5 are also fine. They don’t really stand out as particularly loud, but they do their job fairly well.

Keyboard and touchpad: It grows on you

Turning to the keyboard, I’d say the experience on the Acer Swift 5 is pretty good. When I first used it, the keyboard felt shallow, but I got used to it in just a couple of days, so I can’t really complain. It does feel shallower than the ASUS ROG Flow X13, which is my main laptop, but it’s far from bad. And just like the Swift 3, the power button and is integrated with the keyboard and it includes a fingerprint reader, so you can turn on the laptop and unlock it in one go. 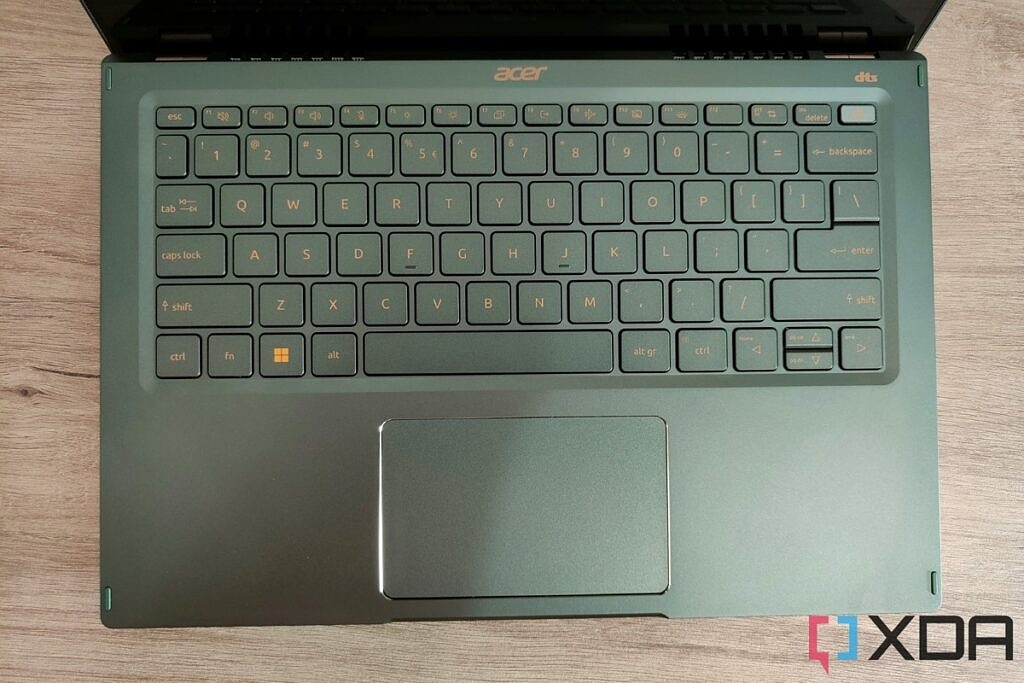 As I’ve mentioned above, the keyboard is backlit, with a white light shining through the gold key labels, which makes for a cool effect. Most importantly, the key labels are easily visible regardless of whether the backlight is on or not, which is something I criticized with the Swift 3. The Swift 5 also seems to do a better job of preventing the light from bleeding around the edges of the keys.

As for the touchpad, it’s fine. The touchpad is the kind of thing I won’t have much to say about unless I find it annoying, so if I don’t have a lot to say, that’s a good thing. It works well and it’s decently big. There seems to be some empty space that could have been used to make it even bigger, but I have no problems with this. 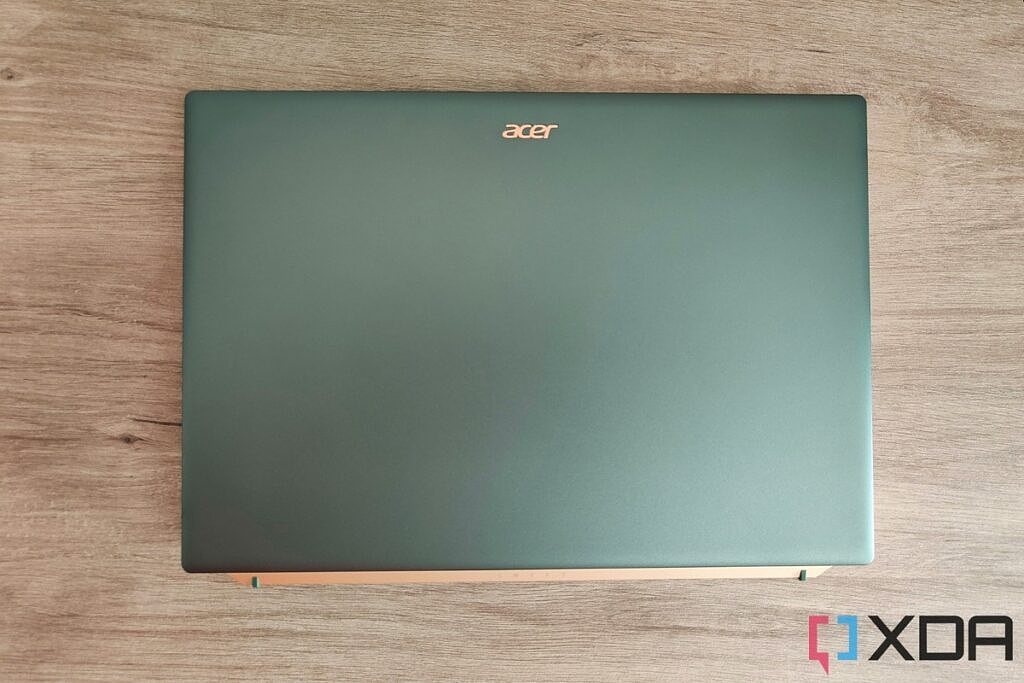 All in all, the 2022 Acer Swift 5 is looking to be a great laptop, even though it has some fierce competition at this price point. It’s a beautiful device, which gets a lot of points in my book. Plus, it has a great-looking screen, and typing on it is also fairly comfortable. While I can’t discuss performance, you can look at other devices powered by the new Intel processors to know what to expect, it shouldn’t really deviate too far from that.

We’ll have to wait a little longer to test a finalized unit we can review, but I’m looking forward to testing the Acer Swift 5 further.