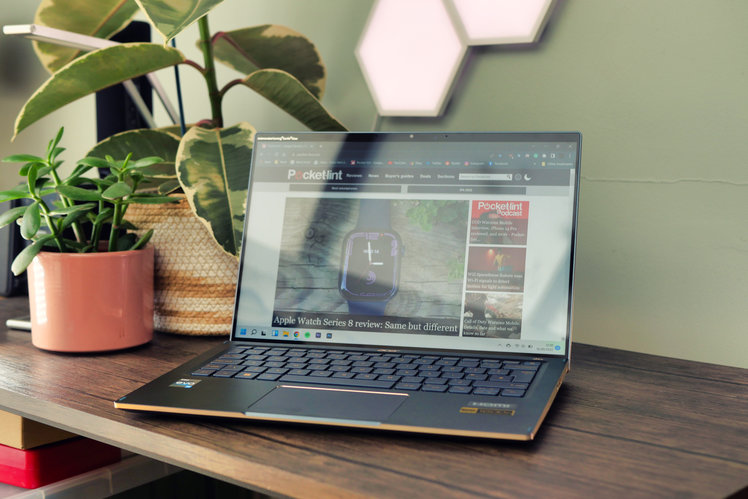 The Acer Swift 5 makes a great first impression, with an well-considered design and a solid luxury feel. It has a 12th Gen Intel i7 onboard, so it should be quite the performer, too.

However, with its substantial price tag comes some serious competition from the likes of the Dell XPS 13 and Apple MacBook Air.

Can this swanky little Acer machine keep up with some of the market’s bestsellers? We put it to the test, and here’s what we found out.

The Acer Swift 5 stands out from the crowd with its brushed golden trim and unique dark bluish colourway. It looks extremely luxurious, and it feels it, too. The chassis is made from aluminium and is cool to the touch, while the display is covered with Corning Gorilla Glass. 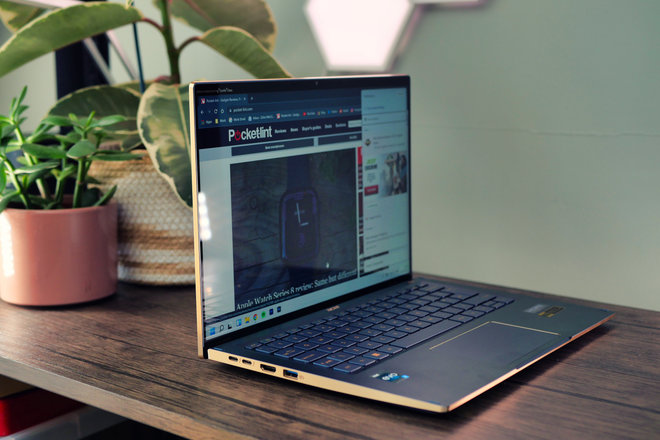 It’s compact and fairly lightweight, so it’s suitable for frequent travellers, but it’s a touch thicker than most premium ultrabooks in 2022. On the plus side, this added girth leaves room for some substantial IO, which we were very happy to see. On the left-hand side, you get a USB-A, full-sized HDMI and two Thunderbolt 4 ports. On the right, you’ll find another USB-A along with a 3.5mm headphone/microphone socket and a Kensington lock port.

The keyboard looks fairly unremarkable, but it’s nice to type on, with a stiff lattice and plenty of key travel. The colour-matched lettering looks quite attractive, but it’s challenging to see in low-light situations, and the backlighting doesn’t help matters much. It seems to spill more light towards the trackpad than through the key legends. 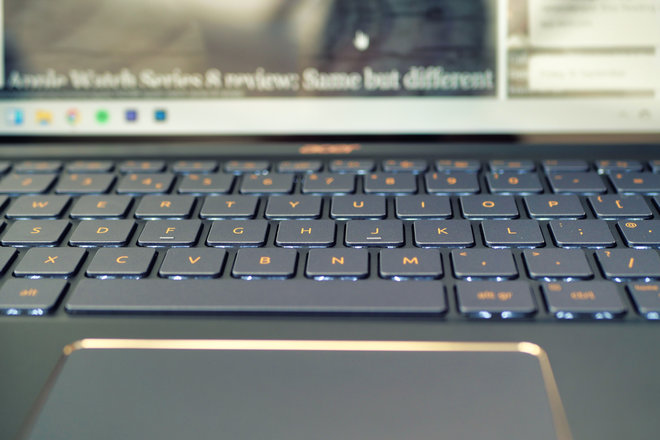 There’s a fingerprint scanner located on the power button and it works reliably, though we must admit it took us a moment to find it on initial setup. We’re not big fans of the power button placement, as it can be easy to accidentally hit when you’re aiming for the delete key, but it’s a minor (and common) gripe.

The trackpad is made from recycled ocean-bound plastics and feels almost exactly like a glass trackpad. It glides well and is moderately sized. The click requires a bit more force than we’re used to but, generally speaking, it’s pretty great.

The display has a 16:10 ratio with nice slim bezels. At this price point, it would have been nice to see an OLED panel, but since that could reduce battery life, the IPS display may be the wiser choice. Regardless, we weren’t left wanting when it comes to image quality, the display has plenty of contrast, full sRGB coverage and nice vibrant colours. 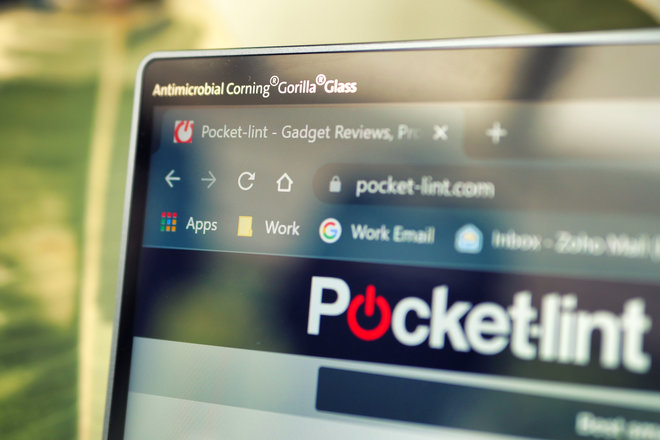 Being a touchscreen, it’s glass-fronted, which aids the contrast levels and adds to the premium look and feel. However, reflections can be a little distracting from time to time and the 425 nits peak brightness can struggle to compete outdoors on a sunny day.

The speakers have some decent clarity and stereo separation but they lack low-end, as we find with a lot of laptops. They can’t get very loud, either, so you’ll struggle to hear things properly in a noisy environment. They’re positioned in a downward-firing orientation, but thankfully they don’t get muffled when using the Swift 5 on your lap. 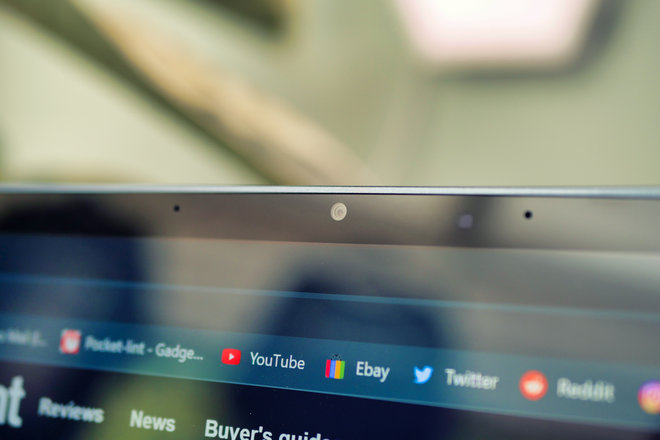 We were impressed with the 1080p webcam and think it outperforms a lot of its rivals. It has plenty of detail and natural colours, making it more than suitable for video conferencing without the need for additional equipment. It also handles backlighting well and has a surprising amount of dynamic range. We were a bit disappointed at the lack of Windows Hello facial recognition, but the fingerprint reader is quick enough, so long as you remember that you need to use it.

In day-to-day use the Acer Swift 5 is a solid performer, and we never ran into any issues with our typical work tasks, video playback or Photoshop use. We even managed to edit some 4K 120fps footage in Adobe Premiere Pro and were impressed by the playback smoothness and rendering speed. 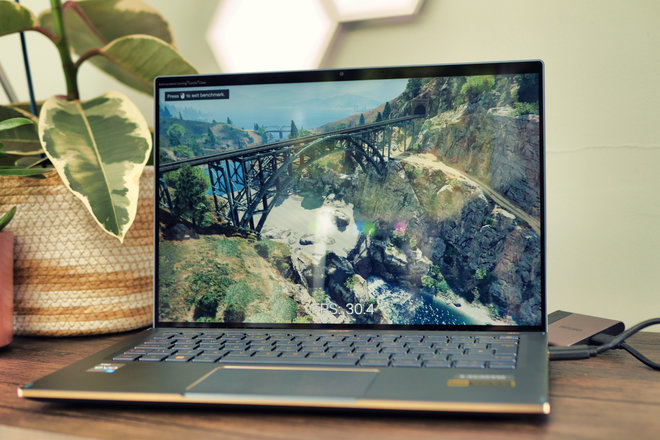 The Swift 5 isn’t designed for gaming, but if you fancy a bit of gaming session on the side, it’ll handle most games at lower settings. We found that GTA V was playable at 1080P low settings, albeit only at 30fps. Less demanding titles, like CSGO, ran very well on the machine.

One thing we didn’t like about the Swift 5 was the amount of bloatware that came preinstalled. Everything from Norton Antivirus and CyberLink software to Spotify and Firefox comes loaded onto the laptop. It’s easy enough to remove the software that you don’t want, but on a premium device like this, you shouldn’t have to go to the trouble.

Battery life is respectable and if you’re just surfing the web and doing light productivity-based tasks then you can expect somewhere in the region of 9-10 hours on a charge. Of course, that figure will be much lower if you’re doing anything intense like video editing or gaming. 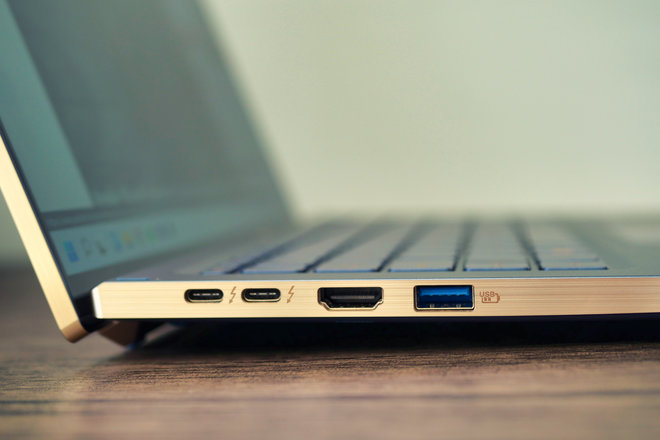 We’re always happy to see USB-C charging, and even happier to see a nice compact charger included in the box. It’s a 65W fast charger, and it’ll net you around four hours of extra battery life in a 30-minute charge. Plus, you can use it to fast charge your phone in a pinch.