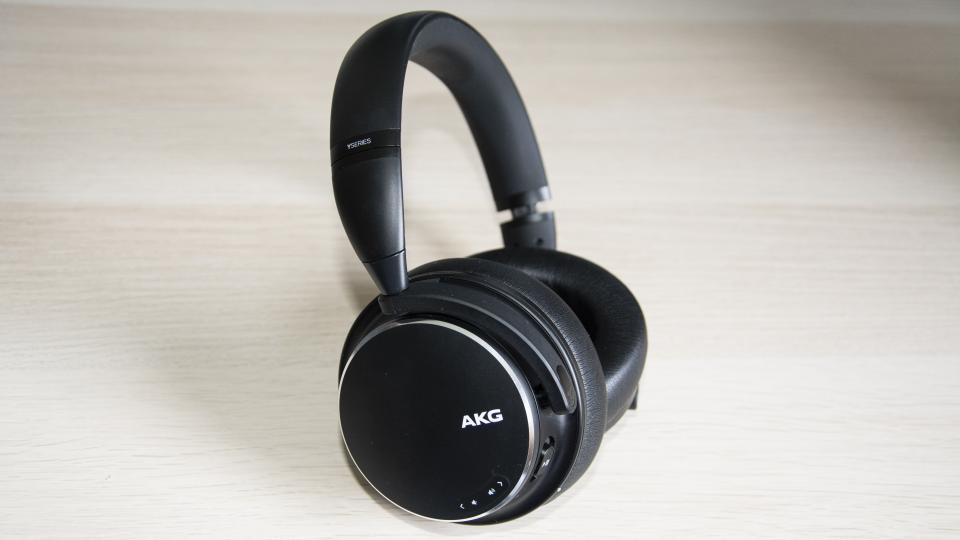 Noise cancellation may not be on par with pricier rivals, but the Y600NC are capable headphones nonetheless

The AKG Y600NC are the first over-ear entry into the company’s popular Y series, which includes the Y50BT and Y500 – both of which sit on your ears – and the Y100 earphones. They’re also the first entry to feature active noise cancellation and, at £199, are less expensive than the most advanced over-ear ANC headphones out there.

However, it’s a case of you get what you pay for, with the Y600NC unable to match pricier options when it comes to reducing external sound, while their expansive soundstage may not be to everybody’s tastes. 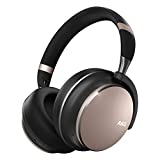 AKG Y600NC review: What do you get for the money?

The AKG Y600NC are available for £199 from a range of retailers, including Argos, Currys PC World and Amazon. There’s nothing extraordinary in terms of what they do: they’re over-ear wireless headphones that operate over Bluetooth 5 and offer active noise cancellation.

There’s support for the standard AAC and SBC codecs in addition to Samsung’s Ultra High Quality (UHQ) codec, which seeks to restore lossy audio files to closer to their original sound. UHQ is only compatible with certain Samsung devices, including Galaxy Note and S series smartphones, Galaxy Tab A and S series tablets and the Galaxy Z-Flip. A full list of compatible devices can be found here. Battery life is quoted at up to 25 hours with Bluetooth on (there’s no way to turn the ANC off) and up to 35 hours when you’re not connected wirelessly.

Along with the headphones, which come in three colours – gold, black and silver – you get a 1.2m cable in the box. This is terminated with 2.5mm and 3.5mm plugs and has an inline remote for playing and pausing audio. There’s also a USB-C charging cable and a fabric carrying pouch. 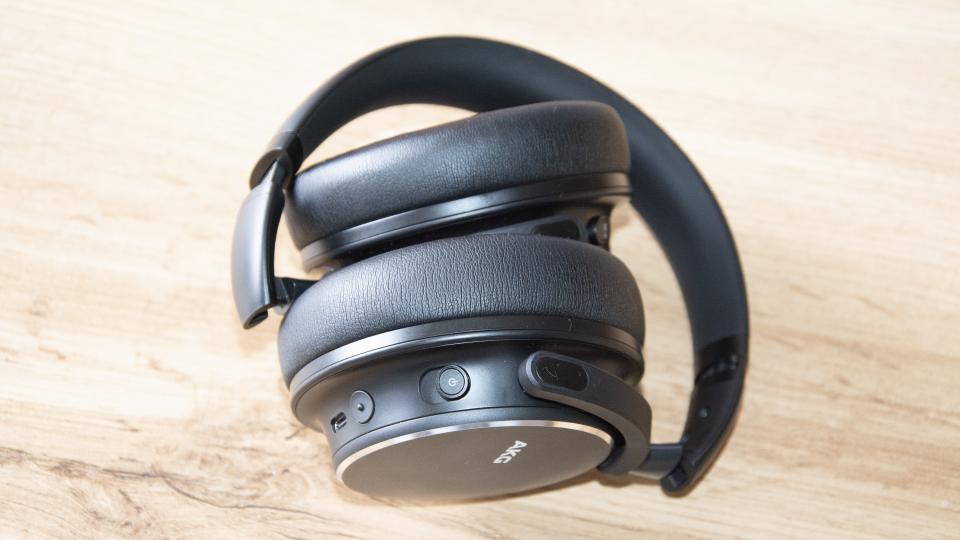 The Y600NC look great and are very comfortable to wear. The black model reviewed here has small white AKG logos and silver rims on the outside of each cup, giving the headphones a sleek, understated aesthetic.

Supple memory foam cushions line the earcups, which are completely circular, unlike many other over-ear cans that favour an oval shape. They sat snugly over my ears and remained a pleasure to wear during multiple journeys across London. The headband is a little short on padding but does provide ten distinct size measurements on its frame, making it easy to adjust to perfectly fit your head.

Controls are implemented simply and effectively, with a multi-function button on the left earcup controlling audio and phone call commands, and a Talk Thru/Ambient Aware button on the other earcup. Volume control is handled smartly, with the outer section of the left earcup functioning as a dial that can be rotated to increase and decrease the volume. I became particularly fond of this feature as it meant I didn’t have to fumble around the earcup to locate discrete volume buttons. 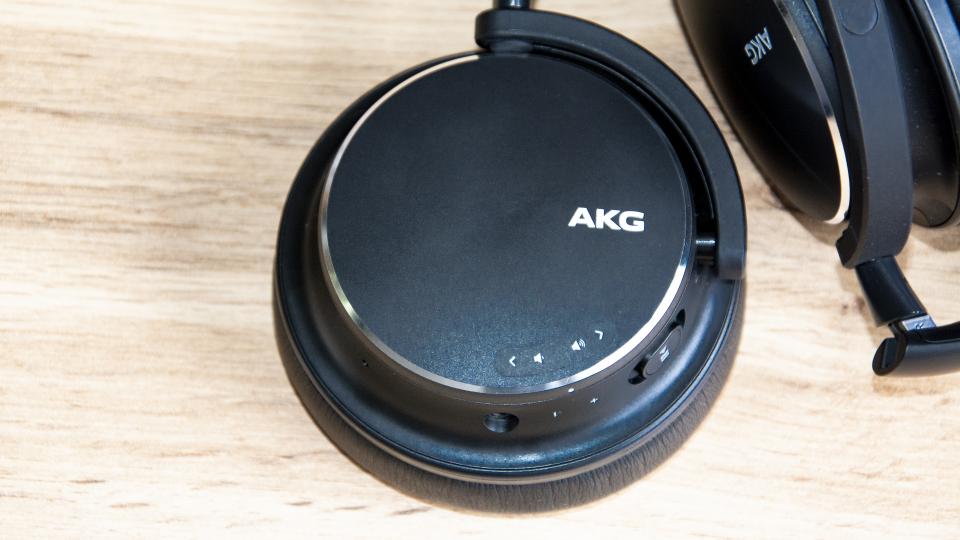 The Y600NC also have multipoint pairing, which allows you to simultaneously pair with two Bluetooth devices. While working from home, it’s a godsend to be able to quickly switch your audio output from your phone to your laptop or vice versa. There’s also wear-detection, which automatically pauses your audio when you take the headphones off and resumes it when you put them back on, another welcome convenience feature.

The Y600NC are among the most spacious sounding over-ear headphones I’ve tested. Whether that’s a pro or con will come down to your audio preference but I enjoyed the open “AKG reference sound” delivered by their 40mm drivers across the 10Hz to 24kHz spectrum. The wide soundstage is rich in detail, with instrument separation particularly impressive, while bass is controlled without ever being truly ear shaking.

The AKG Headphone app isn’t the most feature-rich companion app around but does offer the ability to create your own EQ profiles. I’m a big fan of being able to play around and personalise my sonic experience so having that at my fingertips was a big plus.

At under £200, the price of the AKG Y600NC is also rather appealing. It positions them firmly as a mid-range option, significantly undercutting the likes of the Sony WH-1000XM4, Bose NC700 and B&W PX7 all of which have list prices around the £350 mark. Those headphones all offer more effective ANC, however, so you’ll want to consider whether you’d rather save a bit of money or be better equipped to drown out the world around you.

I touched on it above, but the Y600NC’s main weakness is ANC. It’s not bad but is completely outclassed by its more expensive rivals. On train journeys, I found I was still able to hear people chatting around me pretty clearly, although the sound of the train itself was reasonably well masked.

There’s no dedicated button to turn ANC on and off, either. It’s on by default unless you activate either of the “Smart Ambient modes” – Talk Thru or Ambient Aware. These modes are activated by pressing a small, studded button below the right earcup, but only one can be assigned to this button at a time, meaning you need to open up the companion app to switch between them. 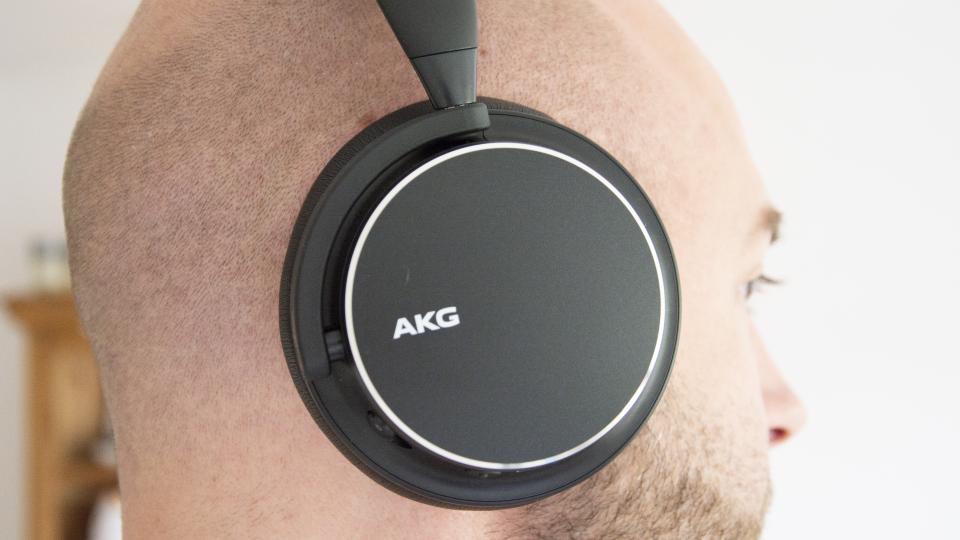 TalkThru reduces the volume of your music to allow you to hold a conversation, while Ambient Aware cuts the ANC in favour of allowing you to better hear what’s going on around you. The former was pretty much redundant as I’d rather just pause my music when speaking to someone, but the latter is useful while crossing roads or listening out for important announcements.

Given the price of the Y600NC, I was also disappointed that they only come with a fabric pouch. It’s decent quality and rather fetching but offers little in the way of protection. A hard-shell case with zips, such as the one that comes with the equally affordable Philips PH805, would have been preferable and would provide greater peace of mind while stowing the headphones away in a bag.

AKG Y600NC review: Should you buy them?

The AKG Y600NC are capable mid-range wireless headphones. They’ve got a classic look, are comfortable to wear and their physical controls are intuitive to use. Sonically, their airy audio profile will prove attractive to some but off-putting to others. I rather liked it, and with a bit of EQ tinkering, I was able to achieve a profile where I could very happily listen to a range of genres without having to constantly switch between one profile and another.

Where the Samsung Y600NC fall short is in their ability to reduce environmental sound. The ANC here isn’t completely ineffective but it can’t compete with the likes of the Sony WH-1000XM4. That’s to be expected given the much lower price but, if ANC is a primary concern, you’ll want to spend more to get the best around. You’ll find a number of other great options in our list of the best ANC headphones available.

Should you be willing to accept a bit more background noise and a spacious soundstage appeals to your sensibilities, you’ll get on well with the Y600NC. However, if you can stretch your budget a bit, the superb Bose QuietComfort 35 II are available for £209, while those wanting a cheaper option should take a look at the Philips PH805, which offer very similar features for even less (£129).