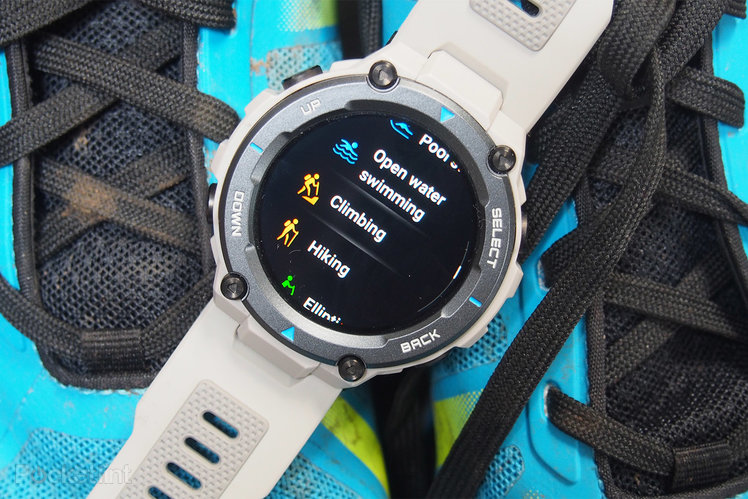 The Amazfit T-Rex Pro is a sportswatch built for outdoor lovers. Its maker, Zepp Health, has sought to make it a better companion for trail runs, hikes and open water swims than the original 2020 T-Rex model – by making the Pro better suited to surviving in extreme conditions and adding new sensors to offer richer metrics too.

A core part of the T-Rex Pro is its affordable price point – it’s significantly cheaper than most outdoor watches, so could save you some money if you wanted something to take out on adventures. But while the price and feature set might read as appealing, does this T-Rex bring future goodness or is it a bit of a dinosaur at launch?

The T-Rex Pro largely sticks to the same design formula as the T-Rex. There’s a similar-sized 47mm polycarbonate case, matched with a 22mm silicone rubber strap, all weighing in at 59.4g. To put that into perspective: the 47mm Garmin Fenix 6 weighs 80g, and the Polar Grit X weighs 66g. So the T-Rex Pro is a lighter watch thanks to that plastic case. We’d almost like a bit more weight to it, if anything. 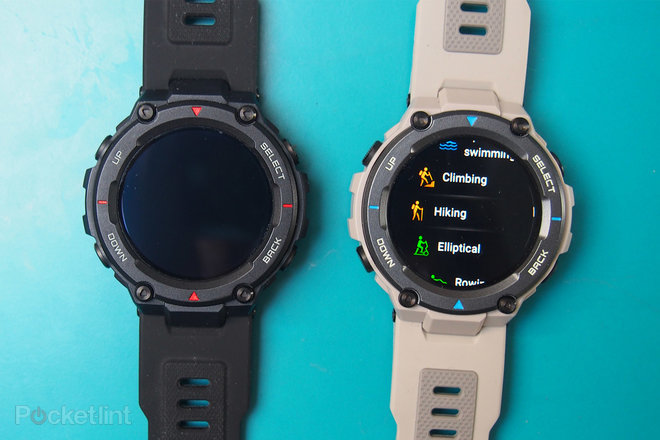 Along with those improved military grade toughness credentials, it’s also ramped up the water-resistance rating – offering protection up to 100 metres depth (10ATM). The ‘non-Pro’ T-Rex can be submerged in water up to 50 metres.

At the heart of that light, rugged, chunky exterior is a 1.3-inch AMOLED touchscreen display, which can be set to always-on. Tempered glass and an anti-fingerprint coating has been used to make it a more durable and smudge-free display – and we can confirm it’s a screen that doesn’t give you that unattractive smudgy look as its predecessor suffered. 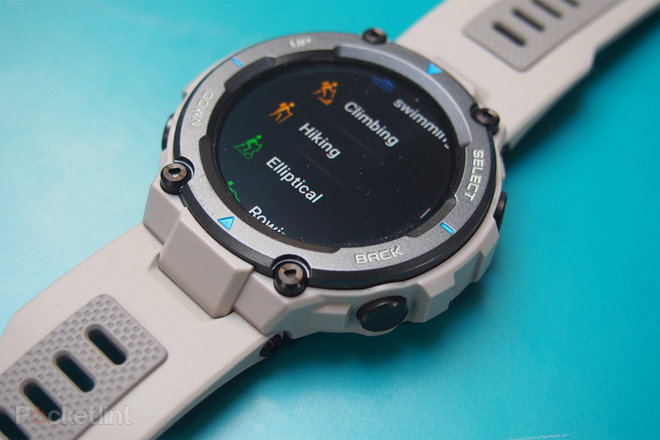 It’s a bright and colourful screen, with good viewing angles. In bright outdoor light, that vibrancy isn’t quite as punchy as in more favourable conditions, but it’s on the whole a good quality display to find on a watch at this price.

Around the back is where you’ll find the optical sensors and the charging pins for when you need to power things back up again. It uses the same slim charging setup as the T-Rex, which magnetically clips itself in place and securely stays put when it’s time to charge.

In true Amazfit fashion, the T-Rex Pro goes big on sports modes – and includes the kinds of sensors that should make it a good workout companion.

There’s 100 sports modes up from just the 14 included in the standard T-Rex. It still covers running, cycling and swimming (pool and open water), but it’s also added profiles for activities like surfing, dance, and indoor activities like Pilates.

The majority of these new modes will offer you the basics in terms of metrics, though modes like surfing and hiking will offer additional ones like speed and ascent/descent data in real-time. The addition of an altimeter here means you can capture richer elevation data, which is useful if you’re a fan of getting up high and hitting those mountains and hilly terrain.

For outdoor tracking, there’s support for four satellite systems with GPS, GLONASS, Beidou and Galileo all on board to improve mapping accuracy. You don’t have any type of navigation features to point you in the right direction, though, nor can you upload routes to follow on the watch.

For road and off-road runs, we found core metrics were reliable during our testing. GPS-based distance tracking came up a little short compared to a Garmin Enduro sportswatch, plus we had issues inside of the app generating maps of our routes as well.

Swim tracking metrics were generally reliable and it was a similar story for indoor bike and rowing sessions. In the pool, it was a couple of lengths short of the Enduro’s swim tracking, though stroke counts for indoor rowing largely matched up to what we got from a Hydow rowing machine.

But when you dig a little deeper beyond core metrics, some of the T-Rex Pro’s data seems a little questionable. If you’re happy to stick to the basics, though, then the Pro does a good enough job.

Along with manual tracking, there’s support for automatic exercise recognition for eight of those sports modes. This is something we’ve seen crop up on Fitbit, Garmin and Samsung smartwatches with varying success. On the T-Rex Pro, you’ll need to select whether to automatically track activities like running, swimming and indoor rowing. As Zepp Health outlines: there can be instances where accidental recognition can happen with some activities when you jump on a bus or a car. Fortunately, that wasn’t the case for us.

Zepp Health’s newest BioTracker 2 optical sensor is included to power a host of heart-rate features outside of continuous monitoring and measuring effort levels during exercise. It’s also used for the PAI scores, which seeks to shift the attention away from counting steps to regularly raising heart rate through exercise. It’s also used for taking heart rate variability measurements to track stress levels and is used for training insights – like those found on Garmin watches – that will generate VO2 Max scores, training effect, training load, and recovery times. 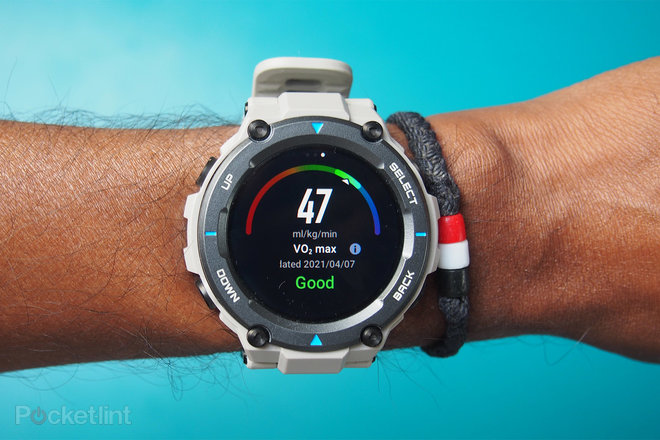 You’ll get those staple activity tracking features here too, such as capturing daily step counts and monitoring sleep as well as naps, capturing sleep stages and breathing quality, which is tagged as a beta feature and makes use of the new onboard SpO2 sensor.

We found step counts were at times well within the counts of a Fitbit smartwatch – but also some days where we registered longer step totals there was a much bigger difference.

When you’re not tracking your fitness, the Pro does do its duty as a smartwatch too. It runs on Zepp Health’s own RTOS software – and while it might not be the most feature-rich smartwatch experience, it will give you a little more than the basics.

Google Android and Apple iPhone users can view notifications, control music playing on your phone, along with setting up alarms, reminders and changing watch faces. You don’t have payments, the ability to download apps, a music player or a smart assistant, which has appeared on some Amazfit watches. 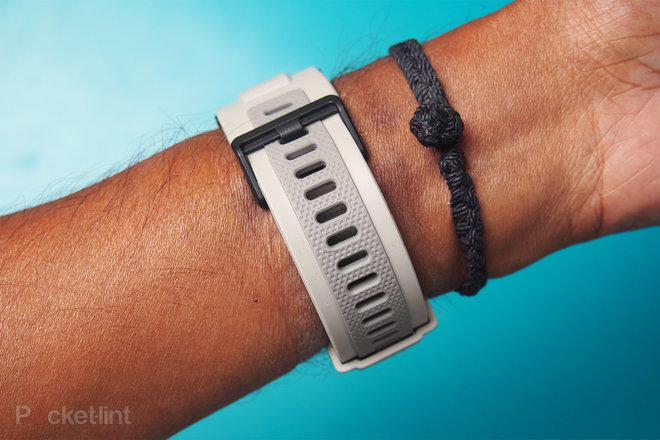 Notification support is of the basic kind, letting you view notifications from native and third-party apps, but not respond to them. They’re easy to read, but what you can read varies based on the type of notification. If you happen to have multiple notifications from the same app, it struggles to display them all and merely lets you know you have multiple messages. Music controls work well as they do on other Amazfit watches and features like weather forecasts and watch faces are well optimised to that touchscreen display.

The T-Rex Pro features a 390mAh capacity battery – matching what’s packed into the T-Rex. That should give you 18 days in typical usage, 9 days in heavy usage, with an impressive 40 hours of GPS battery life.

Like other Amazfit watches, those battery numbers tend to be based on some very specific lab testing scenarios. In our experience, it’s always felt a little on the generous side. In our time with the T-Rex Pro, we got to around the 10 day mark on a single charge. That was with regular GPS tracking, continuous heart rate monitoring, stress monitoring, and the richer sleep tracking enabled. We had the screen on max brightness but not in always-on mode. 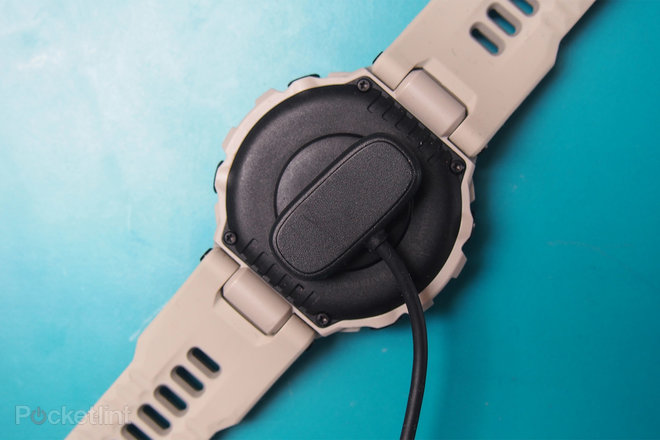 The standard T-Rex felt like it was good for a solid week using it in similar conditions, orring 20 days in typical usage by comparison – but the Pro can get you longer than a week even with some of the more demanding features in use.

Things seem to have improved on the GPS battery front as well. An hour of using the GPS usually knocked the Pro’s battery just under 10 per cent, while the T-Rex usually lost 10 per cent from 30 minutes using the GPS. It might not be the 40 hours that was promised, but the Pro does seem to hold up a little better than the T-Rex when it comes to tracking.