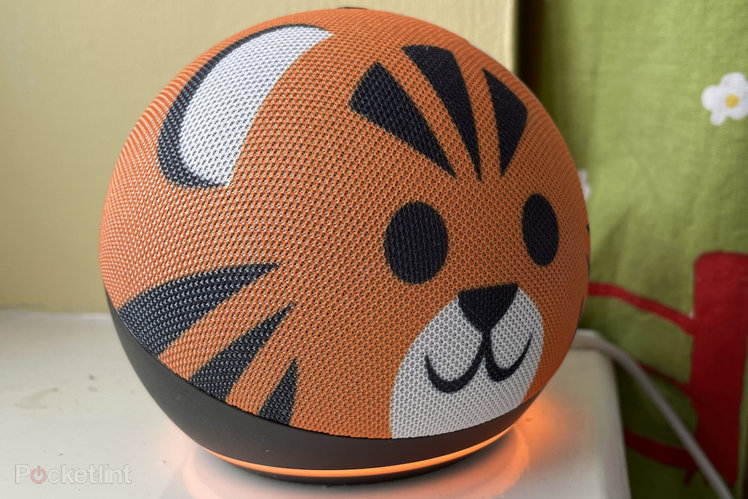 Amazon has introduced its child-friendly Echo Dot to the UK. Called Echo Dot Kids, it’s based on the 4th generation Echo Dot introduced late last year and while the hardware is identical, it features either the Panda or Tiger design as you can see here.

A version of Echo Dot Kids has been available since 2018 in the US, first based on the older 3rd generation Echo. Amazon says that it has worked hard to localise Alexa for UK children and develop bespoke UK skills rather than just transplant the US experience to the UK.

While the 3+-rated Echo Dot Kids is $10/£10 more than the standard Echo Dot, you get a few extra features as well as the aforementioned kid-friendly design. There’s a two-year worry-free warranty for starters, similar to that Amazon offers for other child-friendly products where it will replace the device if it gets broken.

A year’s subscription to Amazon Kids+ is included – now also introduced to Alexa in the UK for the first time – which gives you premium skills from Disney, Number/Alphablocks, Beat The Intro, Harry Potter, Clangers Talk, The Gruffalo and more. There are also 170 Audible books included from the likes of David Walliams, Michael Bond and C S Lewis, too as well as access to 10 Fun Kids radio stations and various other educational apps. Children can also be set a wake-up alarm from their favourite character.

If you have an existing Alexa device, you can also add Kids+ to it at a monthly fee of $2.99/£1.99 if you have Amazon Prime already or just start using it if you already have a Kids+ sub on another device such as a Kindle for Kids or Fire Tablet for Kids.

Echo Dot Kids is intended as a safe space for children, with explicit lyrics filtered out on Spotify, Apple Music and Amazon Music while voice purchasing is banned. You can fine-tune many things about how your child experiences Alexa – including setting bedtimes and time limits – in the Amazon Parent Dashboard where you can also see your child’s Alexa commands and usage.

You can also pause the device completely. Kids are able to make Announcements or call other Echo devices in your home, but they can’t call other contacts unless you specifically set them up in the Alexa app as a trusted contact.

Alexa on Echo Dot Kids will also thank children if they’re polite (a feature called Magic Word) and deliver bespoke responses to children that are more educational than the standard version of Alexa would deliver.

Rather than having to learn specific responses, Alexa will suggest activities if you say commands like “Alexa, let’s play”, “Alexa, let’s go” or “Alexa, I’m bored”, too, so children can generally find something to hear that they will enjoy.