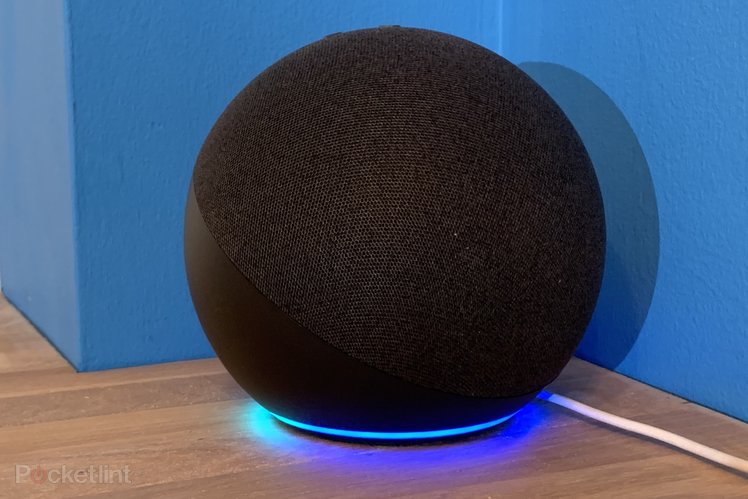 The Amazon Echo has gone through some changes over time. After the tall cylinder original came the fabric cylinder second-generation, then the better-looking fabric cylinder for the third-gen, and now for the fourth-generation… it’s a ball. Yep, the 2020 Amazon Echo re-work takes on a somewhat surprising form, not least because the cylinder just seemed part of the Echo’s raison d’etre.

However, the new Echo is not just a design rework, it’s a tech upgrade internally too – and as such should be seen as a worthy improvement. The Echo Plus has now disappeared from the range – which was inevitable given 2019’s power-up of the standard Echo – leaving the spherical Echo to sit pride of place in the smart speaker range.

The sphere is the new cylinder, not just for this Echo, but also as you’ll see elsewhere in the range: the new Echo Dot and Echo Dot with Clock are also updated to suit this new design language.

While the 4th Gen Echo is similar in height to the previous model, it now has a wider footprint. Which isn’t necessarily a good thing. These devices are often placed on bookshelves, window sills, or worktop corners – where space isn’t exactly plentiful. 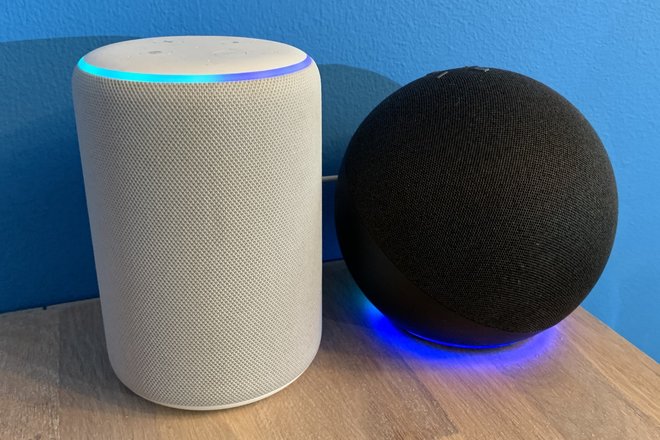 But then the Echo has grown into the Echo Plus position in the range, which, while not anywhere near as room-filling as Echo Studio, means it’ll probably be the main speaker in a room – as such there’s an argument that it probably won’t be hidden away.

It also marks a step away from the traditional ‘Echo top’, featuring a light ring around four key buttons – mute mic, action and volume up/down. Those buttons are still there, but they’re integrated into the fabric – yes, the fabric covering remains, available in black, a slight blue hue, or white. The buttons do work well though and do have a good ‘click’ to them.

The small indented panel on the back enables you to connect up power, while there’s a 3.5mm audio in or out – you can control which you want in the Alexa app. 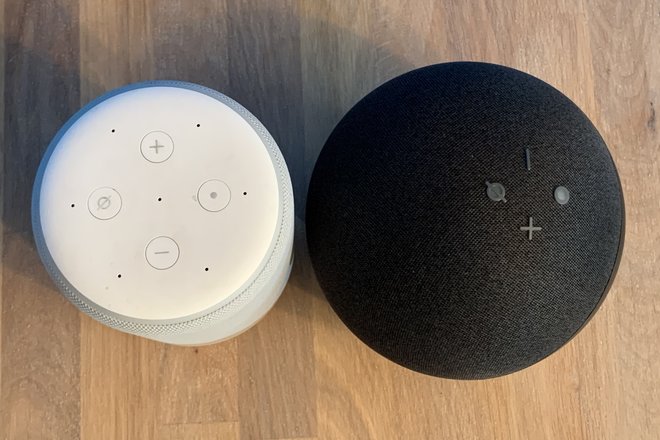 On the 4th Gen Echo, however, the light ring is now at the bottom. And we do have a bit of a problem with this: if you’re close to the Echo and it’s on a countertop (ours lives on a standard kitchen countertop usually) and you’re not a short person, you can’t really see the light ring activate unless it’s from the reflection of the light ring on the surface. Crucially it’s harder to see out of the corner of your eye.

Of course, most people don’t wait for the light ring to activate before issuing a command to Alexa, but it can be harder to tell that Alexa is dealing with your request and that isn’t a good thing.

We get it, a new design does freshen up the Echo range. But with a few other spherical devices around – and with the similar-looking Apple HomePod mini soon to launch – we can’t help but think that the Echo has lost a little of what made it so distinctive.

Amazon has worked to improve the setup of Echo devices in recent times. And the effort is clearly paying dividends – if you already have an Echo device setup in the Alexa app then adding an extra device is a cinch. You don’t need to sign in or put in the Wi-Fi passcode as that’s all taken from an existing device. The presence of the new device is also automatically detected.

Alexa itself doesn’t have any particular skills that work with this Echo in particular, and we’ve got Amazon’s voice assistant covered off in detail elsewhere – you can set timers, get the news, access Skills, control smart devices, and talk or broadcast to other Echo devices. 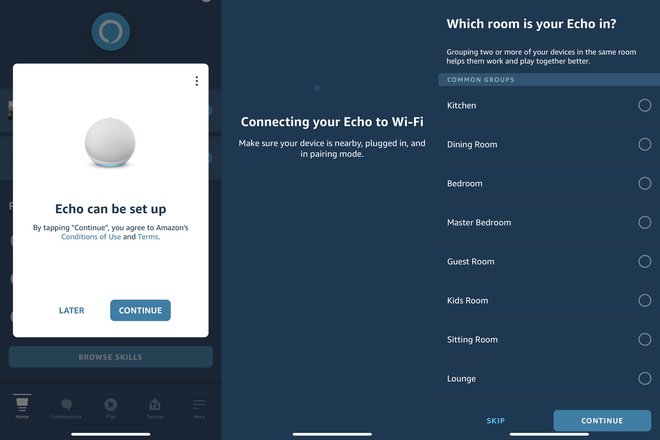 But this new Echo has a lot of future potential too. Because Echo’s smart home ‘smarts’ have also been improved quite significantly – whereas there was a Zigbee controller in the Echo Plus before, this now comes to the Echo, too. This enables you to control and setup various other smart home devices.

The device doesn’t support the incoming Thread smart home protocol that’s in Google Nest devices and the Apple HomePod mini. Essentially both are designed to create low-power networks for smart devices in your home but is still in its infancy.

But there is support inside the new Echo for yet more protocols – Bluetooth Low Energy Mesh plus Amazon’s own Sidewalk. Sidewalk is also a punt on the future of smart home tech. Like the others its designed to tie together smart home devices over a low-power wireless standard – but crucially it’s designed to work over a longer range. Perhaps we’ll see devices that won’t have Wi-Fi and will just use Sidewalk to communicate with a hub in your home, like the Echo. 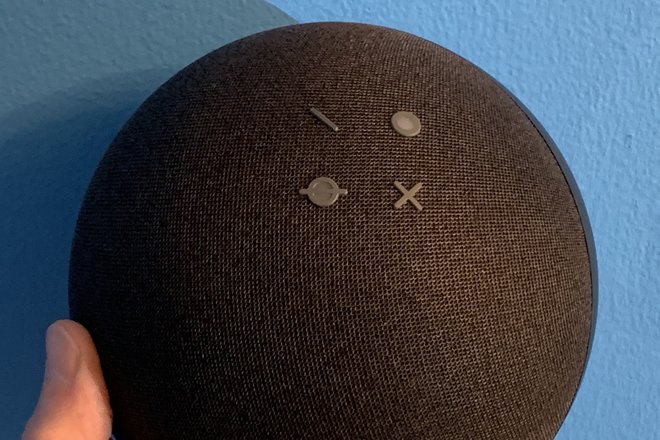 Of course Amazon owns both Ring and Blink, two companies with smart home devices, and we’re seeing some Ring devices get support already. The incoming Ring Car Alarm is a key example of where Sidewalk will be useful – your car probably isn’t in range of your Wi-Fi while it’s parked up. We’re looking forward to testing that out when it’s available. Ring will also be introducing compatible Smart Lighting soon.

The Echo’s internals have had a significant improvement this time around too. There’s a new MediaTek chip inside (as well as the Echo Show 10 and Echo Dot), Bluetooth 5.0, and Wi-Fi 5 (not Wi-Fi 6, but then it is early days for that technology). This is bespoke hardware designed with Amazon and the platform integrates the brand new Amazon AZ1 Neural Edge processor. It’s not just a chip that’s been thrown in, either – it’s fully integrated alongside the MediaTek silicon.

The key aspect of this is to to make voice recognition better – especially recognition of wake words and keywords – and therefore make Alexa more accurate and responsive. It is clearly a bit speedier in responding to requests – it’s a tiny amount of time in the grand scheme of things, but it’s welcome nonetheless. 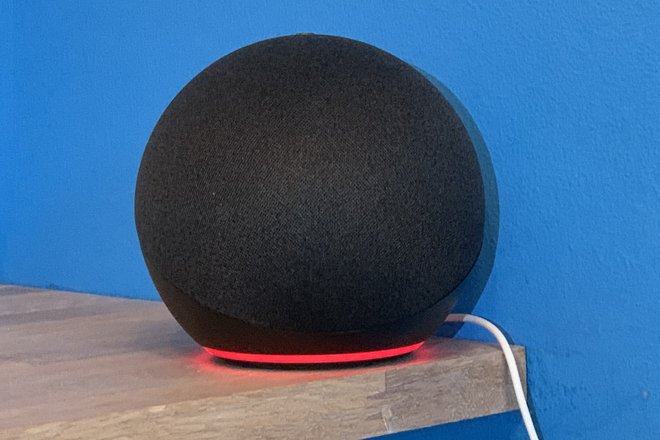 The performance improvement is evident from a simple task – startup. We started up the new Echo alongside the older version from cold and the new device is ready in seconds, whereas the old version takes around 20-30 seconds.

The sound has also had a power-up. Not that the previous model was lacking in that area – the second-generation Echo Plus and third-generation Echo shared basically the same audio hardware, and both were pretty good in terms of the quality they offered. The beef of the sound for the 4th Gen Echo comes from a 3-inch woofer, just like in the older model.

But there’s a key change: whereas the older devices were designed to have 360 audio – as the Echo Studio does – the new Echo adds in two 0.8-inch tweeters that make it more directional (the previous device had a single tweeter) which Amazon says now provides stereo separation without having to pair up a second device with it. 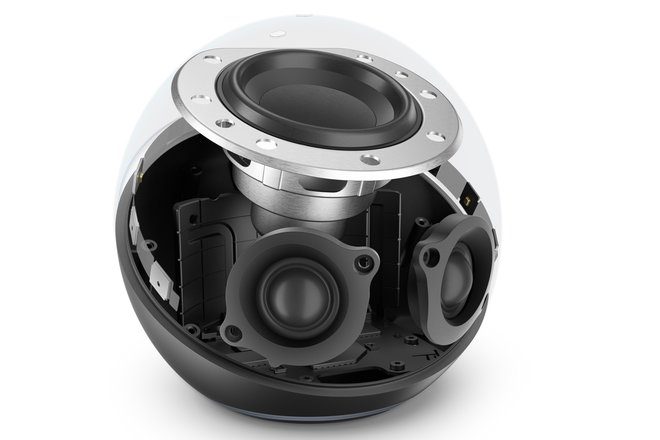 Bassier tracks are where you’ll find the limit of the Echo’s ability at full volume. It does an admirable job unless it’s maxxed out. But really the mark of the audio quality is that you don’t need to turn the volume up for crisp sound during everyday listening to the radio, audiobooks, podcasts or music.

Once again, you can multiroom connect really easily with other Echo devices. This works especially well with Spotify Connect, although all the big streaming services are supported. You can also pair the Echo with an Amazon Fire TV device should you wish. Plus you can, as you always could, stream from a Bluetooth device, too.