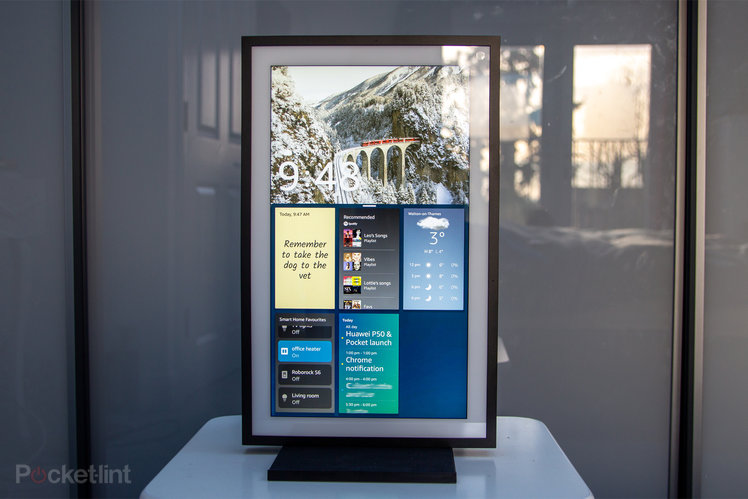 Amazon introduced the Echo Show 15 in 2021, taking its family of Alexa-enabled connected smart devices into a new realm, pushing out to a new larger 15.6-inch size and inviting you to mount it on the wall.

Indeed, this flattened Alexa device doesn’t come with the stand – that’s an optional extra – instead you get the drilling guide and a mounting plate. But what additional benefits does the Echo Show 15 bring by going bigger than its forebears? Not many, it seems…

The Amazon Echo Show 15 looks like a fat picture frame, a 15.6-inch display, surrounded by a white mat board (or passepartout), with a black frame. As such, it looks like other framed pictures, except that it is some 35mm deep. 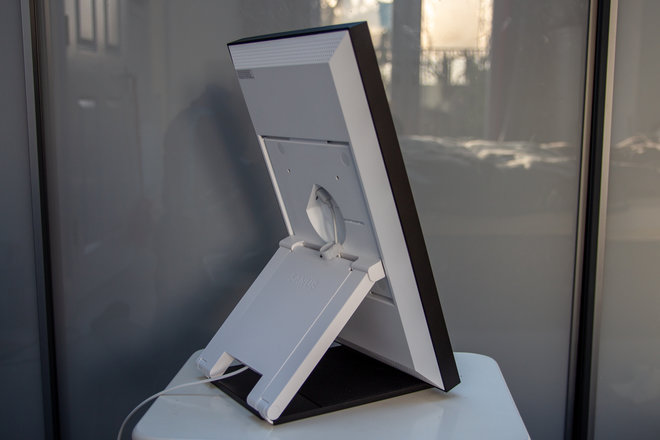 The frame itself is 20mm deep, the remaining 15mm is the rear section of the device, which slopes towards the centre slightly, giving the appearance of a floating frame rather than a huge box stuck on the wall. That’s neat and tidy and it looks good once in place.

The frame or bezel is home to a couple of controls: the volume, the mute button to stop Alexa listening to you, and the slider for the physical camera cover.

The camera itself if in the white mat board between the frame and the visible display area. You’ll see a black circle when it’s open, but the cover is white, so it blends in fairly well when covered. 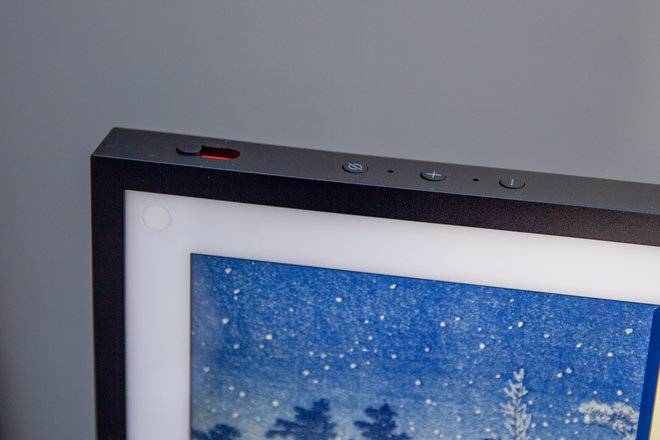 The volume controls are worth an additional mention, because they are divided into plus and minus, giving the impression that the Echo Show 15 was designed as a device to be mounted in portrait. Why? Because then the plus volume button is the upper of the two; when mounted horizontally, the plus volume button is then on the left, which is counter-intuitive: a rocker that changed orientation when you rotated the device would have been a better solution to maintain up/down control conventions.

In the box you get the power supply and the bits you’ll need for wall-mounting. That includes the screws, wall plugs (rawlplugs, US friends) and the frame the Echo Show will then hook onto. There’s also a drilling guide so you can position and drill – and it’s all very simple, a five minute job. 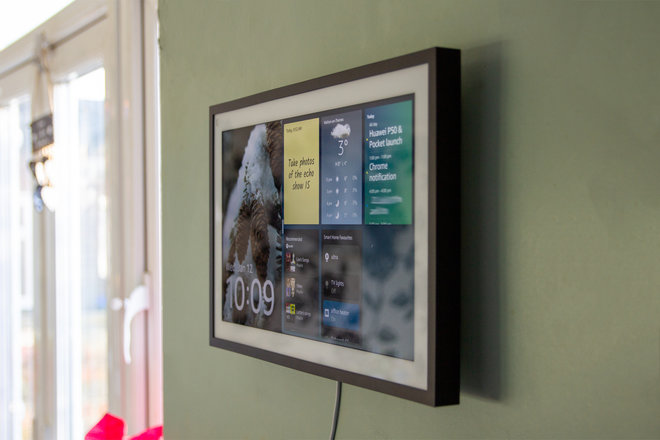 If you don’t want to wall-mount the Echo Show 15, then Amazon offers a tilt stand as an accessory. This £/$30 stand attaches via two screws and allows you to place the Echo Show 15 on a table or worktop. There’s a sturdy metal base topped with rubber so it will grip the Show 15 at whatever angle you want it, so it’s again easy to setup.

Starting at the beginning, the Echo Show 15 offers a couple of mics so it can hear you and have Alexa respond to your commands. Like other Echo Show devices we’ve used, it has no problem hearing those commands and actioning them, even in a busy and noisy room. That’s a great starting point, as the Alexa experience remains much as you expect – you ask, you get.

Many people use Echo devices as speakers. They evolved from a family of devices sold as smart speakers, the display coming to boost the experience, but audio was and is still a huge part of what’s offered, be that listening to music or watching other content on that larger display. 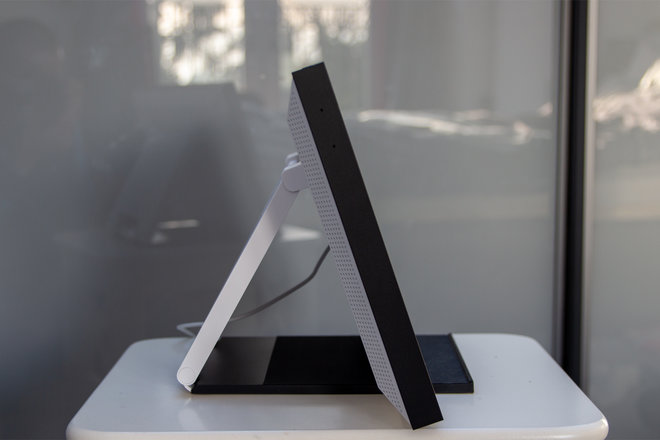 There are two 1.6-inch full-range drives on the rear side of the Echo Show 15. These might sound familiar because Amazon uses 1.6-inch drivers in a lot of its devices, like the Echo Dot.

Here they are mounted in the short sides, with a grille at each end. The positioning means that the sound quality changes based on the orientation and how you choose to mount the product. If you’re using the tilt stand in portrait, then one of these speakers is effectively firing into the baseplate – this muffles it slightly but does give the bass slightly more resonance. It’s a different sound if it’s mounted in landscape, which gives a wider soundscape.

The big problem is that the sound never really sounds robust or high quality. The speakers and the casing they are in just don’t seem engineered to produce the sound quality we’ve become accustomed to on Echo devices when playing music. 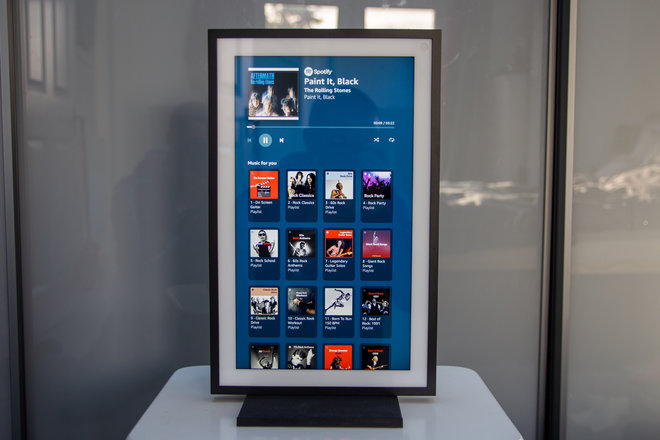 That’s a significant failing of this device: it sounds worse than the smaller Echo Show 10 models and the standard Echo. We wanted and expected to wall-mount this flagship Echo device and have a boost in quality, not a reduction.

You can tweak the equaliser, but it doesn’t really solve the problem.

The screen itself is of a high enough resolution to look good, it’s nice and vibrant, adjusting to the brightness of the room and going to sleep when there’s no one there. At this size, it’s great to call up TV shows from the likes of Amazon Video, Netflix or YouTube.

When watching video content the speakers aren’t so bad – they’re obviously optimised for speech over music or dynamic content. Watching video content is great, but note that YouTube opens in the browser rather than an app, so you might need to tap some of the controls to get the best resolution and switch to full screen. 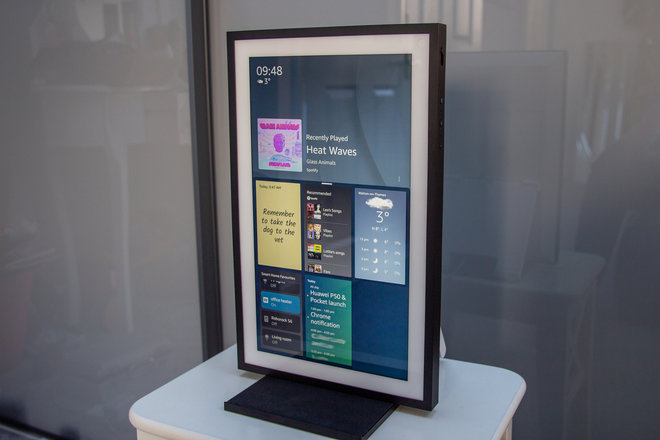 With a larger display, the Echo Show introduces widgets, allowing greater customisation of the screen space, which sit alongside the home screen section and will rotate through a range of topics that you can choose from. The home screen selection is essentially the same as on previous Echo Show devices – news, football scores, weather, recipes, and so on.

Some of these are useful, but there’s limited customisation. Only two offer a larger size (calendar and music) the others relying on scrolling. Some will open full screen with a tap – useful for looking over the calendar – but one that doesn’t is smart home. 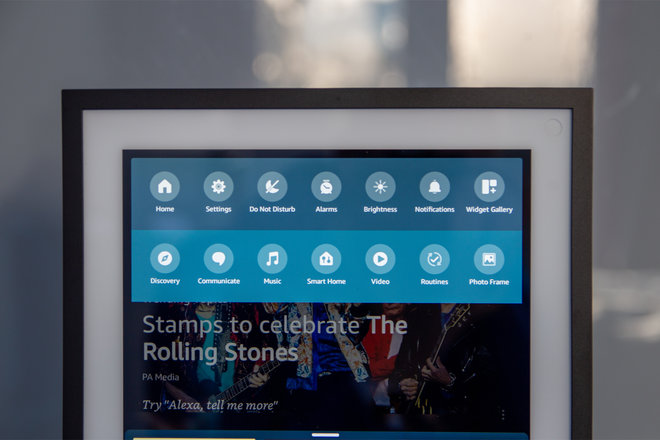 More and more Alexa is becoming the home hub for many, controlling devices across the home hub. But the handling of smart home control on the Echo Show is actually pretty janky if you want to do it on the display. The widget shows you your “favourites” (which seems to be a self-defined list and not user-defined), while to get to all your smart home devices, you have to swipe down the top menu and tap to enter a full screen experience.

Why the widget won’t let you tap through to all your smart home devices is a mystery. Voice interaction with smart home remains fine, but again you can’t seem to open to a home control page, which is what you really want on this sort of device.

So from a smart home point of view, the Echo Show 15 really doesn’t take advantage of the opportunity staring it in the face. Once you do get to the smart home page, it’s basically the same as it is on the Echo Show 5, a single line of devices for you to scroll through if it’s in landscape. This could all be so much more dynamic. 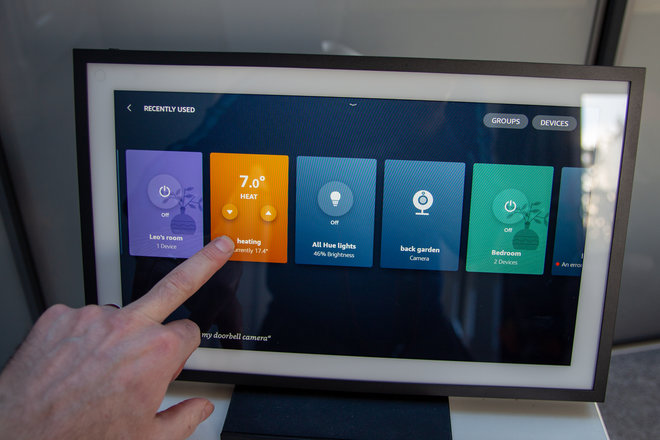 Then there’s the conflict between what the Echo Show 15 is doing and what it’s showing. When you ask it to play music or a radio station, it takes over the whole screen. For something like Spotify that gives you onscreen control and some other music recommendations that’s fine, but if you then return to the home screen while the music is still playing, there’s nothing on the display to reflect that.

Shouldn’t the music widget be telling you what’s playing? Shouldn’t it offer touch controls? The whole experience feels disconnected and incomplete. You can swipe down from the top and there’s a banner that tells you what’s playing, but that’s it, no playback controls. There’s even about 6-inches of empty space that’d be perfect for playback control, but it’s not there, negating some of the reason for there to even be a 15.6-inch screen here. 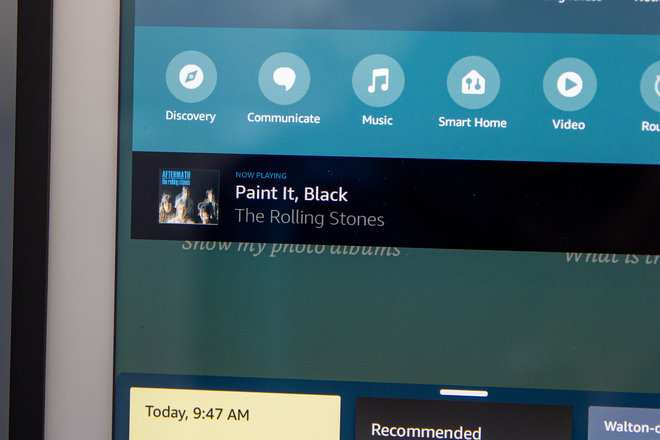 Having a bigger display is great – especially as you can mount it on the wall so it doesn’t feel like it’s taking up any more space – but there’s no real reward, no enhancement of the experience for going larger.

We mentioned the camera in the front of the Echo Show 15. This is principally here to power Alexa Calling so you can make video calls, be that around your home or to other Alexa users. It’s a little odd that in the Echo Show 8 you have a 13-megapixel camera with auto-framing to keep you in the centre of that video call and on the Echo Show 15 it’s static and doesn’t offer that feature.

Anyway, the camera isn’t hugely impressive when it comes to quality, but we’re not sure it matters on this type of device – it serves perfectly well for those casual calls. 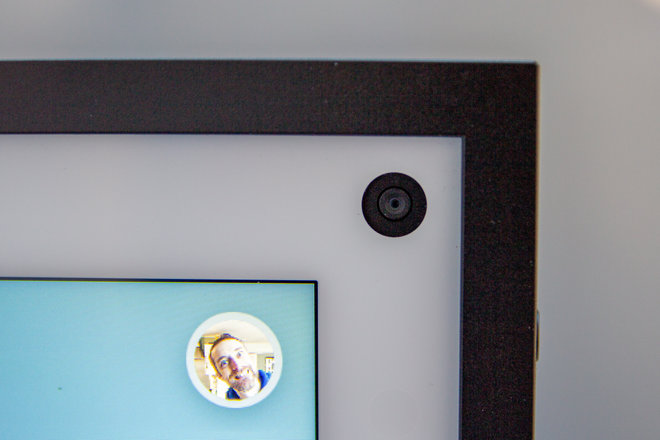 There’s a new feature, however, called Visual ID. This is essentially the same as Voice ID, which is where Alexa learns to recognise your voice so it can respond with information pertinent to you – and offer something different to other users.

Visual ID lets you register your face (which is stored on the Echo Show, not on Amazon’s servers, so don’t worry about the privacy risk there), so that when you’re in front of the Echo Show it can basically log you in and show content tailored to you.

That system seems to work well, but it’s not especially useful at the moment. When it logs us in, it shows us the calendar, recently played music and weather – duplicating the other widgets we’ve already got on the screen, which makes it a redundant function. We took to closing the camera cover so that it didn’t engage Visual ID. 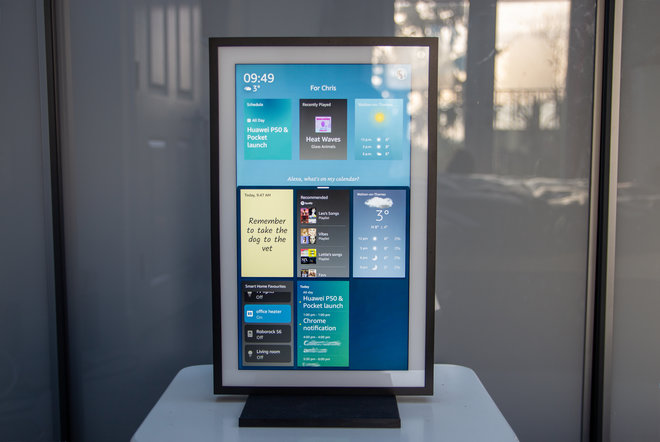 For it to be useful, you’d have to have a completely different set of information for different registered users, like separate calendars. This might work for a power couple with busy separate calendars which Alexa has access to, but for a family, where the Echo Show 15 is pitched as a hub for the household, it seems to make little or no sense at present.

Give it up for Stickies

Turning to a more positive part of the experience, the ability to ask Alexa to create a Sticky Note and actually display it is both useful and fun. Other Echo Show devices will also give you Stickies, but won’t display them – you’d have to ask.

Yes, we’re getting excited about a yellow rectangle with words in it, but they are useful, meaning you can leave a simple note for someone, record the weight of the turkey you’re prepping for the oven, or whatever else tickles your fancy. 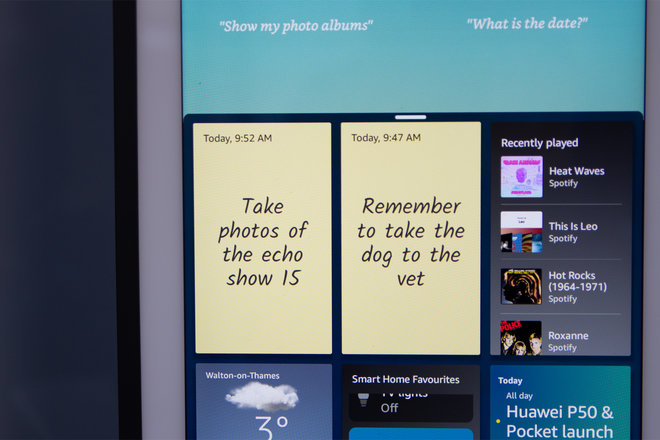 But again, the lack of interest in the user interface shows through. It’s literally a yellow rectangle, not even a hint at a turned corner or anything else – and it has to fit rigidly in the layout of the other widgets. It is prime for a little drag to reposition, overlaying other widgets, pinch resizing, and so forth. Again, there’s so much that the software could be doing here that it isn’t and it’s just disappointing as a result.