If you’ve been recently eyeing up the Echo Show 5, but a bit put off by its usual £80 price, then you might want to take a look at this superb post-Black Friday deal. At half price, the Echo Show 5 is currently only £45 for a limited time.AmazonWas £80Now £45Buy Now

If all battles were won purely by force of numbers, Amazon would have had the smart speaker market sewn up long ago. Indeed, with the release of the Amazon Echo Show 5, its Alexa-enabled troops have now swelled to 13.

That’s a huge number of products, many of which share largely similar duties. The question is, does adding yet another speaker to the lineup make sense? Or are you better off with one of the company’s many other existing smart speakers?

Amazon Echo Show 5 review: What you need to know

The Amazon Echo Show 5 is, effectively, a smaller version of the company’s £220 Echo Show 2. It has most of the same features and functions of that speaker and, as with any other Amazon Echo speaker, you can voice control it. Simply utter the wake word “Alexa” then you can ask it to perform various functions for you, from reading the weather forecast out loud to playing radio stations, music and podcasts. The Echo Show 5’s big party trick, however, is its price, which is a barely believable £80. That’s £40 less than Amazon’s other alarm-clock sized smart speaker, the Echo Spot. It’s £10 less than the 2nd generation Echo, £9 less than the original Google Home and £39 less than the Google Nest Hub, which is Google’s smallest smart display.

The only other rival of note, if we’re talking small speakers with displays, is the Lenovo Smart Clock, which looks eerily similar and is just as cheap but runs Google Assistant instead of Alexa.

In fact, on casual inspection, both the Echo Show 5 and the Lenovo Smart Clock look like they’ve come out of the same design studio. They both have a small, rectangular screen at the front, tilted back at a slight angle, and they both have a fabric-covered wedge at the rear, housing the speaker driver and other components.

The Amazon Echo Show 5 is the larger of the two products, however. It has a 5.5in 960 x 480 resolution touchscreen where the Lenovo’s measures 4in across the diagonal with a resolution of 800 x 400. If you look close, you’ll also see the Echo Show 5 has more external features.

Both speakers have volume and mute buttons (on the Show 5, the latter is more easily accessible on the top edge) but the Echo adds a couple of extras. It has a front-facing webcam for video calling and there’s a 3.5mm output so you can connect the Show 5 to a more powerful existing hi-fi system or standalone speaker. The Echo Show 5 is also slightly better equipped than the 10in Echo Show 2 because the webcam has a privacy shield built in. Move the switch on the top-right edge to the side and the camera is not only blocked physically but also disabled electrically. In this mode, the two far-field microphones mounted on the top edge still work, though.

In theory, popping a display on a smart speaker is a great idea. It adds the potential to do so much more: watch video, read news items, get hints and tips and access setup items that otherwise would require you to fiddle with your smartphone. The trouble is, I don’t think Amazon has gone far enough with its smart displays in the past and, with the Echo Show 5, little has changed.

While it is possible to watch BBC News snippets plus TV and movies from Amazon’s Prime Video service and even play games like Deal or No Deal (I’ll stick with my Xbox for games, thanks), with non-video-based activities like streaming radio Amazon seemingly doesn’t care about what’s on screen. With radio via TuneIn or music from Spotify, for instance, all you get is an icon or cover art and some text describing the station and album/track. Where’s the clock? The date? The weather icon? Why do I have to ask Alexa to “show the home screen” or ask “Alexa, what time is it?” to check the time? These are first world problems, I realise, but still, this is fairly basic stuff.

There is some good news and it is that, while these particular issues have gone unresolved, the Show 5 does benefit from a light UI refresh. Swipe left across the touchscreen and a new panel appears, populated with shortcuts to core features – Communicate, Smart Home, Music, Video, Routines and Alarms – in addition to a selection of “Discover Alexa” cards that provide newbies with help on what to do with the speaker. The Echo Show 5 now has adaptive brightness, allowing it to adjust the screen backlight automatically according to ambient light. It also has a new feature called “Sunrise Effect”, which uses the screen to gently light up your bedroom 15 minutes before your alarm goes off – but only between 4am and 9am in the morning. That’s handy, although not so much for folk living in the Arctic Circle or those who work shifts.

Elsewhere, new integrations include a selection of how to videos from wikiHow, answering questions like “how to tie a tie” and “how to cut a pineapple”, plus the ability to display video streams from Arlo security cameras and baby monitors directly on screen. These are nice additional features but they aren’t strictly related to the release of the Show 5. The Echo Show 5 is a compact speaker and that usually spells bad news for sound quality. Surprisingly, though, it’s quite pleasant to listen to at medium to low volume levels. There’s no sub-bass to speak of but the Show 5 makes a reasonably good fist of representing mid-bass frequencies and above.

Radio voices, whether you’re listening to the cricket on BBC Radio 5 Live Sports Extra or your favourite podcast, sound balanced and full-bodied and, if you turn up the volume, the Show 5 can fill a medium sized room with a startling amount of sound.

In terms of outright quality, this speaker can’t compete with the Echo 2 or even the regular second generation Echo. In the mid-to-upper registers, music often sounds muddy and congested, especially when you turn up the volume. In fact, the mid-bass can become a little overbearing at times. Fortunately, the Echo Show 5 does have a simple bass/mid/treble equaliser setting you can use if the default balance isn’t to your liking. 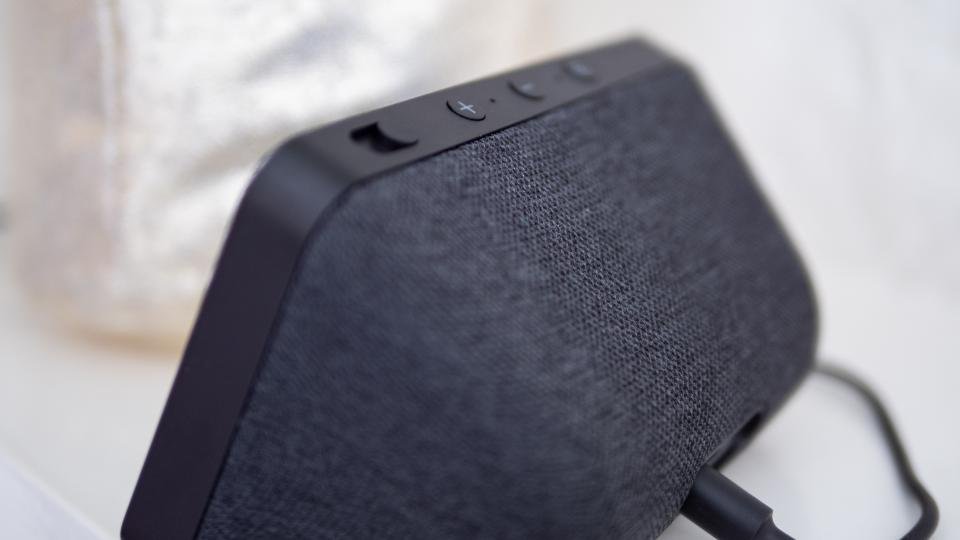 It’s also worth making sure that the bottom edge of the speaker is free from obstructions because that’s where all the sound comes from on this speaker, not from the upper rear surface or the sides – it’s all emitted from one narrow grille facing down towards the surface it’s sat upon. Presumably, this is why the speaker sounds so unusually bassy.

As for microphone quality that, again, is a bit of a mixed bag. The Show 5 has a pair of microphones located on the top edge of the unit, between the mute and volume buttons. Against a fairly moderate amount of background noise (around 53dB), I found these disappointingly unresponsive. While the Show 5 responded reliably to the Alexa wake word at close range (up to a metre-and-a-half away at conversational volume) I had to raise my voice noticeably from two metres away or more.

That means that, while fine for use as a bedside clock or desk speaker, it’s not the best fit for noisier environments. When I put it on my kitchen table, I found I had to repeat “Alexa” and raise my voice far more often than I do with the Echo Show 2, whose microphones are more numerous and face forwards, instead of upwards as they do on the Show 5.

In many ways, the Echo Show 5 isn’t anything particularly special, then. It sounds okay, but its microphone array isn’t great and it doesn’t move the smart display paradigm on significantly over the Echo Show 2. It’s essentially the same device, just smaller.

What it does do, however, is bring the price of smart display tech down to a far more reasonable level. At a price of £80, even with its limitations, the Echo Show 5 is a steal. Not quite a cast-iron five-star bargain, perhaps, but a very good value smart speaker indeed.