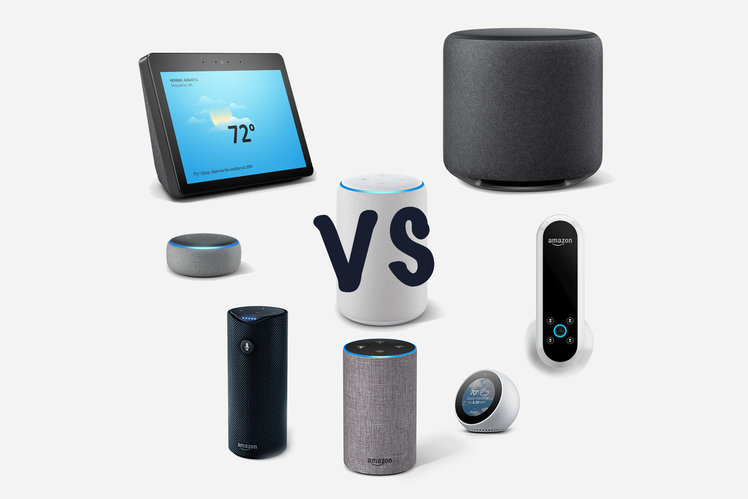 Amazon has a blistering array of Echo speakers, suiting a full range of prices and uses. From the compact up to those you might want to pair for a fuller music experience, through to a selection of devices with displays.

There’s also a burgeoning ecosystem of other Amazon smart devices that work in some way with Alexa – such as the Amazon Echo Wall Clock. We’re detailing what they all do, what the differences are and highlighting the best prices, because Amazon loves to discount when Black Friday comes.

Which is the best Amazon Echo for you? 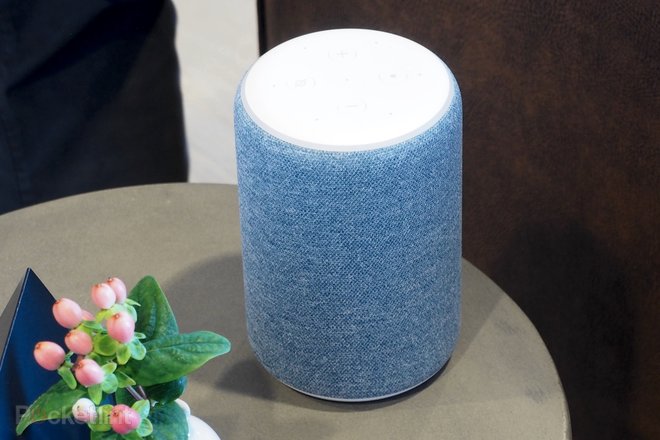 The 2019 Echo takes the quality of the 2018 Echo Plus with the same speaker configuration and design, introducing a new colour, but otherwise offering a higher-quality design and sound than the second-gen Echo.

It doesn’t have the Zigbee controller that you’ll find on the Echo Plus, but that’s a minor omission. If you’re after a quality smart speaker then this new Amazon Echo is the best choice. 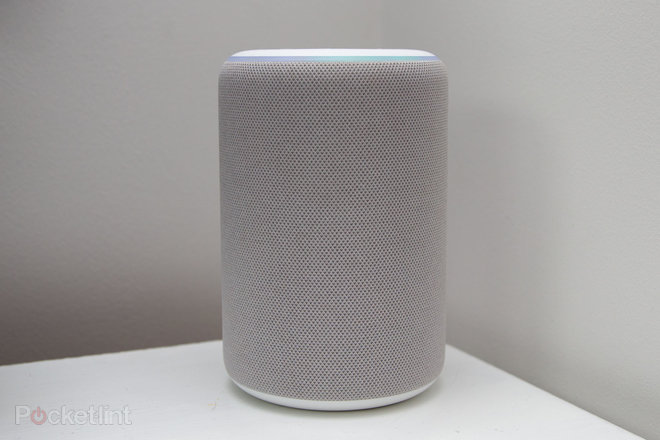 This second-generation version of the Echo Plus appeared in 2018 and takes a shorter, wider stance, with a cloth-covered exterior. The design is essentially exactly the same as the third-gen Echo – as are the speakers inside.

The Echo Plus 2 offers all the Alexa functions that all other Echo devices will offer you, but has a built-in Zigbee controller (like largest Echo Show), meaning you can directly connect to and control compatible smart home devices.

It can also be stereo paired with another Echo Plus and partnered with the Echo Sub to create a 2.1 system. It’s a great all-rounder, but giving that the performance is now matched by the new Echo, you have to really need that Zigbee controller to justify the extra price. 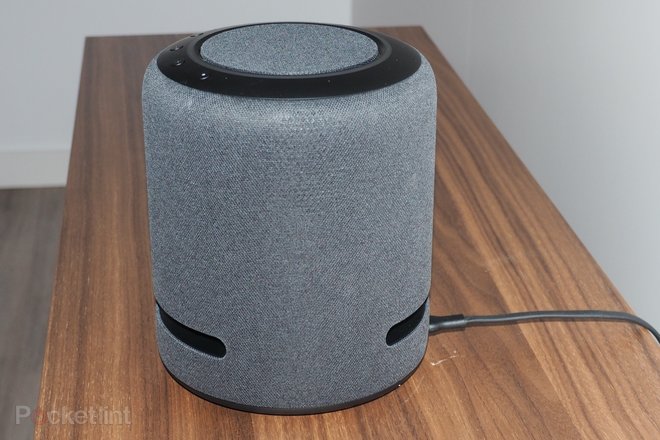 The Echo Studio is top dog for audio in the Echo range, expanding into a bigger unit designed to give much richer sound. It supports the new Amazon Music HD service, as well as offering support for Dolby Atmos and 3D formats from MPEG-H, like Sony 360 Reality Audio. Not only is this a music master, it can handle your TV audio too, compatible with wireless connections to Fire TV devices. It can also be stereo paired.

But at its heart, this is still an Alexa device, capable of all the features that Alexa brings, as well as offering a Zigbee controller so it can natively connect to smart home devices and control them. It’s not going to be available until 7 November, but first impressions are very good – especially as it’s great value for money. 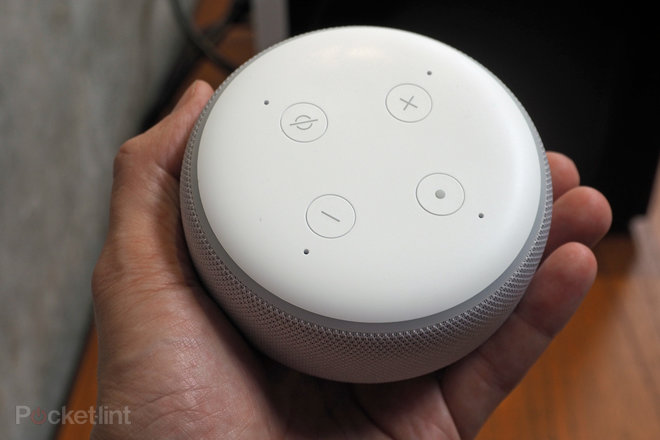 The Echo Dot has been amazingly popular and the third generation was redesigned in 2018, ditching the hard plastic to match the new Echo Plus. It’s a larger diameter than the original model it replaces and that gives space for a new 1.6-inch speaker.

That means the Echo Dot is now a much better standalone Alexa device, better equipped to converse with you and while it’s not really designed as a music device, it will give you better overall sound. It can also be connected to another speaker via 3.5mm cable if you wish.

There’s also a version with a LED clock behind the cloth. 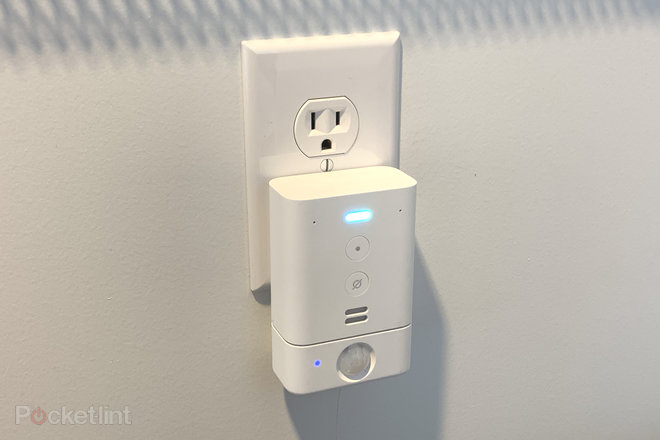 Amazon Echo Flex is the smallest way to get Alexa in your home, plugging right into the wall. It has a speaker and microphone to deliver the Alexa experience, but there’s also a 3.5mm socket in case you did want to hook it up to existing speakers.

It also has a USB connection on it which can be used to charge a phone, but can also accept accessories, including a motion sensor (for Ring Guard) or a night light. It’s a versatile little device and an easy addition to any room. Naturally, it’s not really designed for playing music due to the small speaker, but if you want voice control or Alexa features without the wires, then the Flex is an interesting choice. 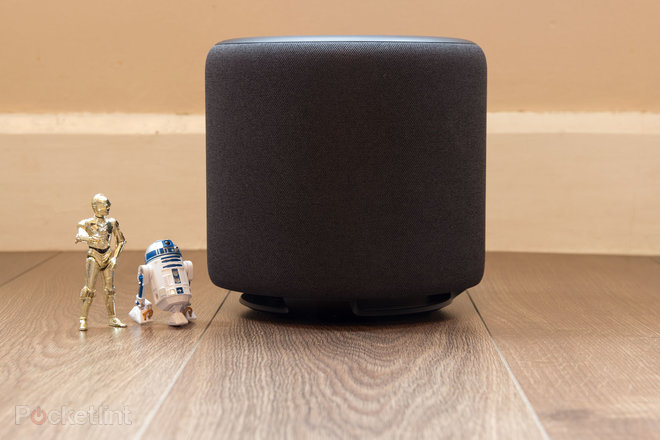 The Amazon Echo Sub is technically an Echo companion, in that it doesn’t offer Alexa in its own right; instead, the Echo Sub acts to boost your Echo set-up by adding a dedicated subwoofer.

The Echo Sub can be paired with one Echo or Echo Plus, but it’s ideally suited to a stereo-paired set of Echos, to create a 2.1 system. The only drawback here is that you’ll have to use Echos of the same type, so a pair of Echo Plus, for example.

Essentially, if you’re an Echo fan and already have one or two Echos, then the Echo Sub is a great upgrade, meaning you’ll have a decent music system – and all with Alexa’s great voice control.

Amazon has also moved into the realm of video too, with several devices that will add a screen to make the Alexa experience more visual. 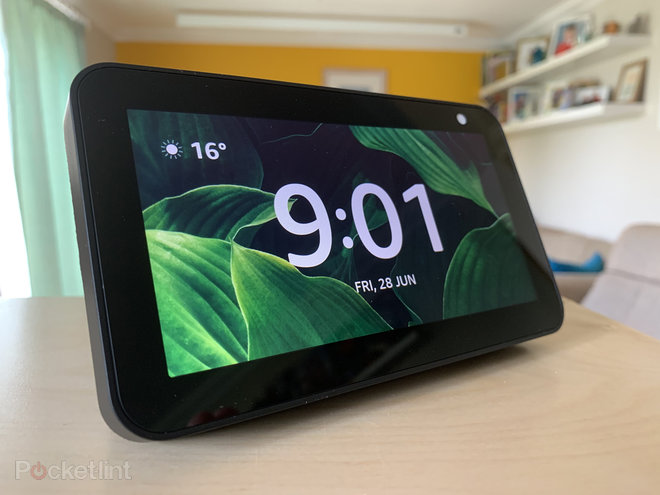 The Echo Show 5 gets its name from the 5.5-inch display and is essentially just a smaller version of the main Echo Show. However, it’s also significantly cheaper and way better value than the main Echo Show. There are some compromises in camera and sound quality, although it provides sound good enough for most small to medium-sized rooms.

It offers a front camera for Alexa Calling, has a single speaker for all your audio and looks like a nicer option for a bedside Echo. Like the Echo Spot, it can also be used as a gradually-brightening alarm clock, while there’s a new privacy shutter over the camera, too.

Like the other Show, there’s no YouTube support which remains a disappointment. But there is video calling with Skype as well as Ring doorbell integration. 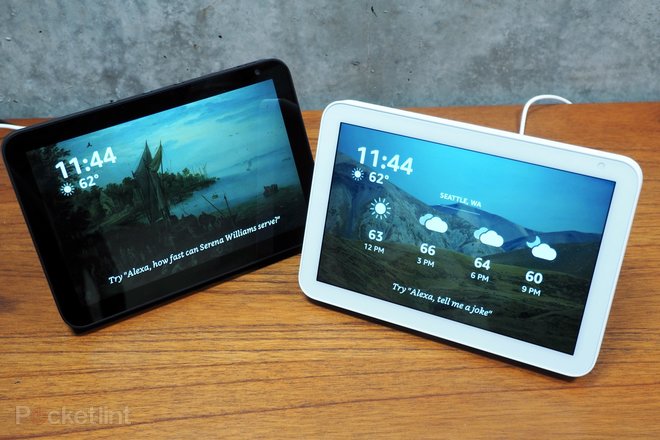 The Echo Show 8 slots into the gap between the Echo Show (10-inch) and the Echo Show 5. It lacks the Zigbee controller that you’ll get in the larger model, but offers a little boost over the smaller model.

There’s a camera on the front – including a cover – so when you’re not using it for calling you can protect your privacy. This is really a larger Show 5, slightly lower power than the 10-inch model. 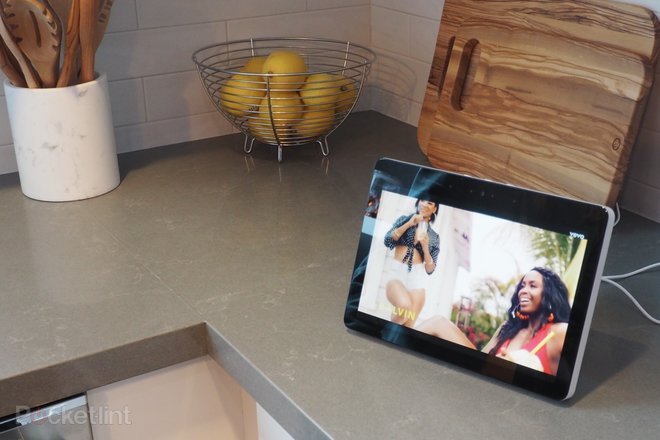 The second-generation Show expands the display over the original model and moves the speakers to the side. The aim is a better audio and visual experience in an improved design, and that’s what you get.

You get all the Alexa skills you did previously, including video calling (now boosted with Skype support), as well as the inclusion of a Zigbee controller. Like the Echo Plus, the new Show can set up and control compatible smart home devices without the need for separate hubs or apps.

The Echo Show remains king of the kitchen, capable of both entertaining and informing, with the display letting you see cooking recipes and your timers, as well as a whole lot more. 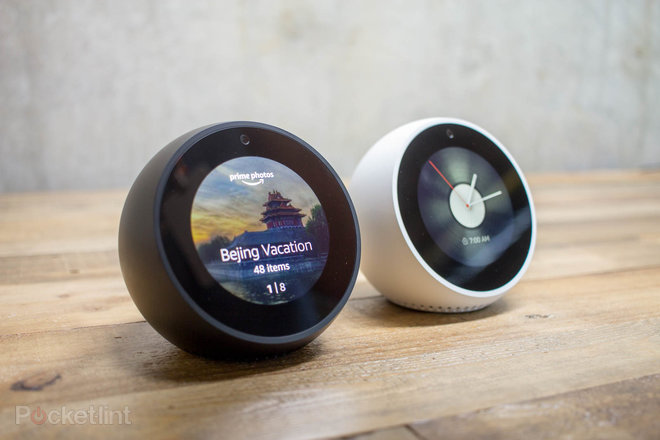 The Amazon Echo Spot is what you’d get if you cross the Echo Show with the Echo Dot. It’s a compact Echo to sit beside your bed for alarms. It has a small 2.5-inch screen, which can be used for basic tasks and skills, like music, but it does a lot more. Like the Echo Show it can be used to make video calls, with a front camera.

It basically offers the same functions as the Echo Show, but in a much smaller form factor – but there’s no Zigbee controller. It can also connect to your Bluetooth speakers, or via line-out.

Amazon officially announced Alexa Gadgets as a range of innovative devices that take Alexa into a new realm. We’ve included the Echo Look in this selection, because of its unique set of features.

It’s a clock that you initially think makes no sense – it’s a pretty dumb smart gadget as it is, to all intents and purposes, a relatively cheap wall clock with some LEDs around the edge. But you know what? We’ve come to depend on ours. It shows you timers in a visual way, so if you regularly cook with Alexa or use other timers, it’s actually pretty useful to see at-a-glance when stuff is finishing. 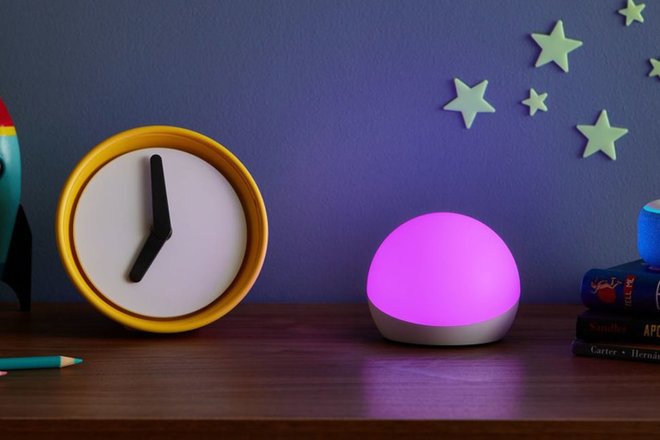 The Amazon Echo Glow is a fun new Alexa device. You’ll need to have other Echo devices to control it, but you’ll then be able to change the colour and brightness, as well as get it to create effects.

It can also be turned on or off with a tap. The Echo Glow will be able in the US from 20 November. 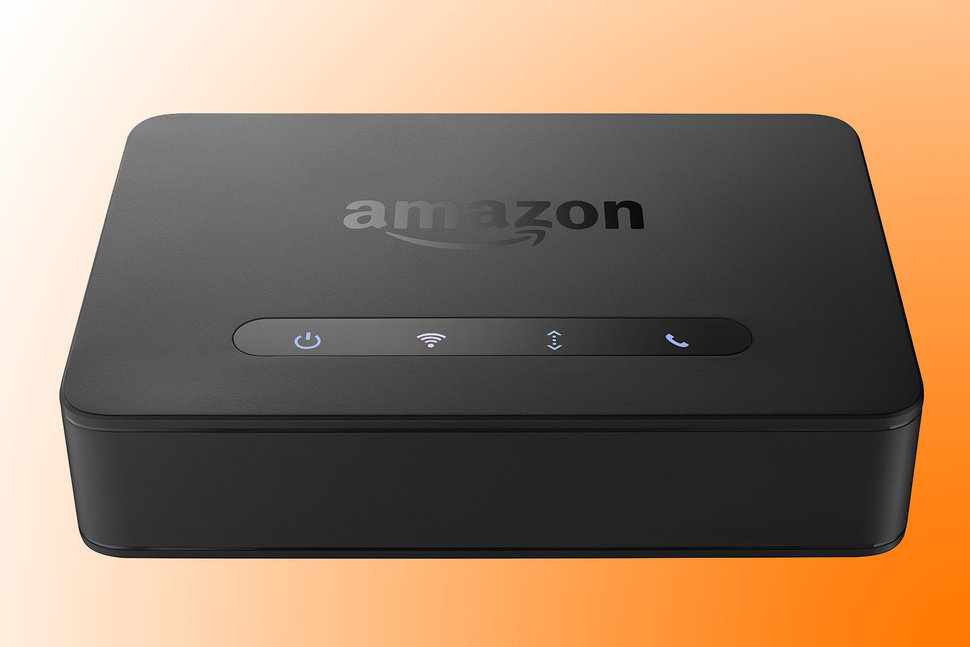 The Echo Connect is a box that you plug your landline phone connection into to turn it into a voice-controlled system. The box works with an Echo to give you Alexa control over your conventional phone line. You will be able to make and receive calls in the home simply by telling it to answer or ring a contact.

As it uses your existing landline number, you won’t need to sign up for any additional services either. Plus, it all connects to other Echo devices around the home so you can call from an Echo speaker in the kitchen, say, or a Dot in the bedroom. It effectively signals the end of the basic handset.

Echo Buttons are Bluetooth-connected devices with an illuminated button that can connect to Alexa for gaming. Imagine playing a game, such as Jeopardy, and being able to slap these buzzer buttons as you play. Jeopardy, of course, has long been a popular skill on Amazon’s Alexa platform, so it makes sense that the company would want to develop an accessory that takes advantage of it.

But you can use these buttons for any Alexa-enabled game skill, including trivia ones.

Conclusion: Which Echo should you buy?

When it comes to the Echo speakers, the new third-gen Echo (or Echo 3 as some might call it) is the hot speaker to opt for – great sound and great value for money.

If music is what’s important to you, then adding the Echo Sub will boost the experience, adding low range skills – so this is also great as an upgrade option in the future. Stereo pairing then makes for a great 2.1 system.

The Echo Plus is a natural smart home controller – although all Echo devices have Alexa skills to support a wide range of smart home devices, the Echo Plus will discover, name and control those devices that use Zigbee (like Philips Hue) without the need for separate hubs or apps. If you’re building a smart home, the Echo Plus is the model you want.

The Echo Studio is in a whole other league, by far the most ambitious speaker from an audio point of view really boosting the quality – but also offering Dolby Atmos and immersive audio when partnered with your Fire TV. It can also be stereo paired, which will be formidable setup.

Echo Dot is ideal to extend Alexa to other rooms of the house where you don’t have an Echo, so if you’ve set up a voice-controlled smart home, Echo Dot makes it easy to always be in voice range – although the Echo Flex will subtly plug into the wall and offer voice controls – although it’s not going to be great for music.

The Echo Show takes things in a different direction. It’s more expensive, but it gives you video calling and a display for more interactive returns. If you know someone else with an Echo Show, it’s a natural choice to save you from needing to use Skype on your laptop. Echo Show also offers a Zigbee controller, so has all the smart home advantages of the Echo Plus.

The Show 5 and Show 8 offer smaller display options, both offering plenty of interactive fun, but not quite as capable as the 10-inch model. We’d pick the Show 5 over the Echo Spot for its better sound and more conventional and useful display, although if it’s a bedside companion you want, the the Echo Dot with Clock is a great option.