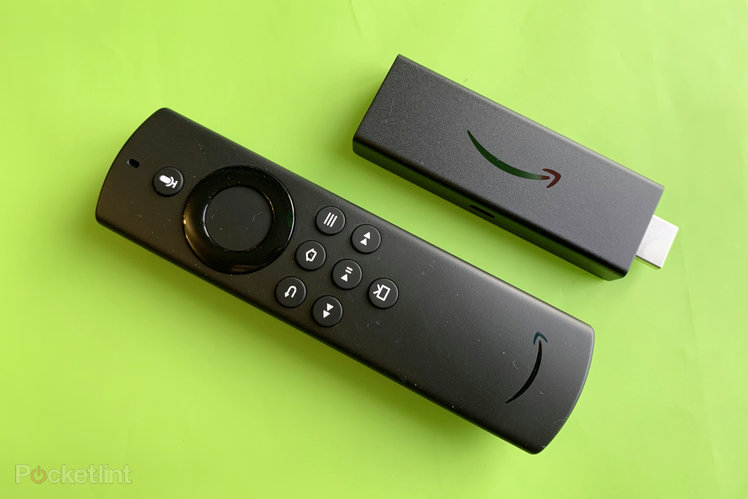 Fire TV Stick devices are great additions to TVs that are either not smart at all, or TVs with relatively slow or restrictive built-in apps. While latter-day smart TV operating systems have many of the capabilities baked in, few can compete with the Fire TV’s comprehensive and varied streaming app support and Alexa control.

The Fire TV Stick Lite is Amazon’s affordable streaming stick, but how does it compare to others in the range? Well, it’s very similar to the standard Fire TV Stick (3rd generation), as both sit as Full HD-capable devices. Want 4K resolution? You’ll need the Fire TV Stick 4K. On balance, then, is the Lite the one to get?

Crucially, the Fire TV Stick Lite differs only from the standard Fire TV Stick (3rd generation) in one respect – the remote with the non-Lite version of the stick features controls that enable you to change how your TV behaves using the volume up/down and power buttons. That’s not so much of a problem if you’re happy to use the TV’s own remote for that stuff. 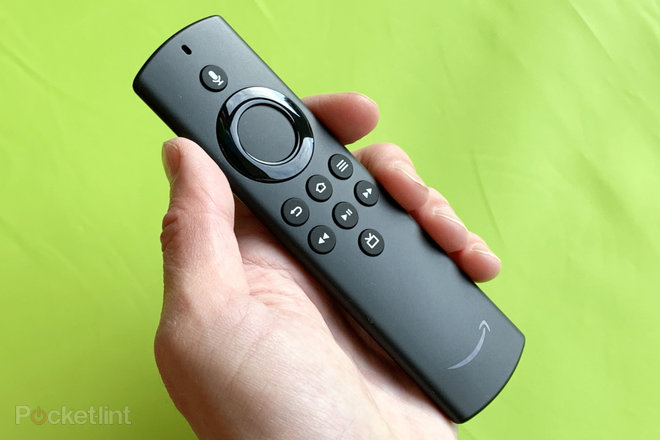 So why have two versions? Well, the Fire TV Stick Lite has clearly been introduced because of cheap Full HD sticks from the likes of Roku with its Roku Express as well as Google’s Chromecast.

Even in such a crowded market, Amazon having three sticks at different price points is clearly what the market demands.

As with its Echo range, Amazon has shown it isn’t afraid to redefine its products or completely tear things up if required (the fourth-gen Echo totally switched the design, for example). Even relatively new products quickly disappear from the range should sales not be moving in the right direction.

As such, we reckon that Amazon will eventually return to offering a single Full HD stick as more people move towards 4K. 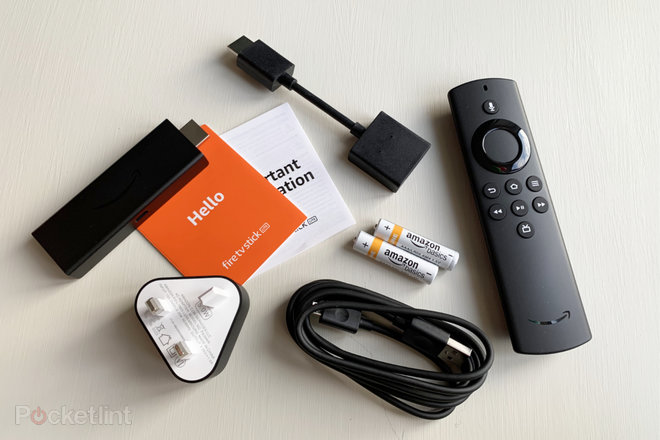 The Fire TV Stick Lite is superbly priced – we’ve also seen $10/£10 reductions during Amazon sale times – which makes it a no-brainer in terms of the decision to purchase.

The boon of streaming sticks is that they stay out of sight, plugged directly into the back of an HDMI port on your TV (as with other Amazon Fire TV devices there’s an HDMI extender should you not be able to plug the stick in directly). They don’t require all the plugs and paraphernalia a set-top box comes with.

While plugging the Fire TV Lite into the mains is recommended, it’s possible to power it via the USB port on your TV to further reduce cable mass (this won’t work for all tellies, though). 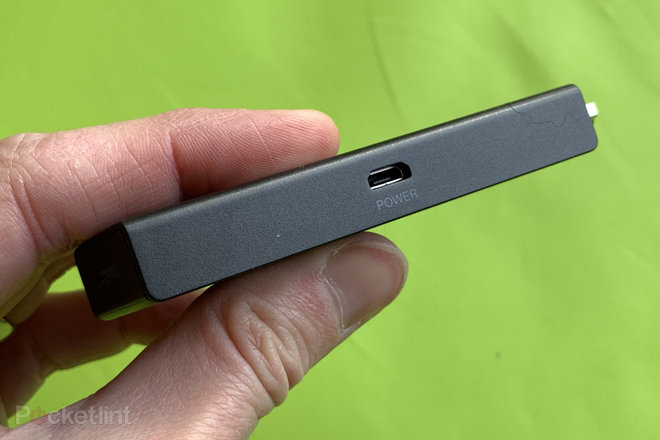 The remote is fairly fully featured for controlling the Fire TV interface itself, with access to some live TV, home and back buttons, an easy-to-use directional and select control, and really simple rewind and forward buttons. On Prime Video especially these come into their own, with one-touch skipping back and forward by 10 seconds each.

Despite its characterisation by Amazon as a ‘lite’ streamer, there’s not a lot that’s an inferior experience here. HDR is supported alongside 60fps Full HD and if you’re not fussed about 4K or those extra remote buttons then it’ll suit you just fine, thank you very much.

Like the other current Fire TV devices, the Fire TV Stick features support for Dolby Atmos audio and Dolby Digital Plus – both via HDMI passthrough only.

This stick has full access to all of the Fire TV apps as well as Alexa’s capabilities – though you need to hold down the voice button on the remote to speak to Alexa out of the box.

Just as with Alexa on other devices, it works really well and erroneous commands are relatively rare; you can easily use it to open an app, search through shows by actor or director, find out what the weather is like tomorrow or switch on your Alexa-enabled smart home device. 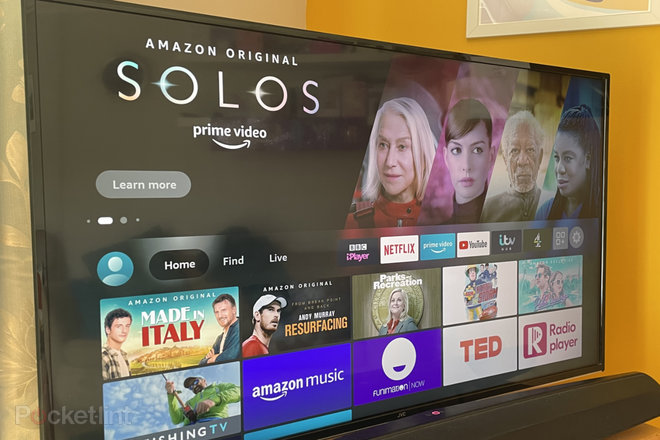 You can search across multiple services and, while it doesn’t work with a huge amount of apps, it does with Netflix (in addition to Amazon Prime Video, but of course).

Although you need to hold the voice button on the remote to speak to Alexa, you can use it hands-free by pairing it with an Echo smart speaker.

The apps available include Netflix, Prime Video, Disney+, Apple TV+, YouTube (finally back after a hiatus), and Disney+, so you won’t be wanting for any streaming services. 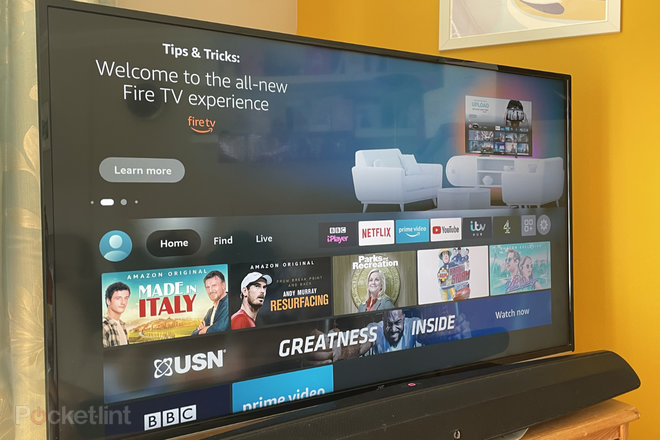 There’s also support for HBO Max and Hulu in the US; and BBC iPlayer, ITV, All 4 and My5 in the UK – among others including BT Sport, Sky News, Now (finally supported on Fire TV after a long wait).

Music apps are also supported such as Amazon Music, Apple Music and Spotify – indeed, there’s a whole library of apps to browse through.

Fire TV is also increasingly being used as a platform for live TV and live sport – you can subscribe to various services and other channels such as Eurosport, Starz or Showtime (all of these incur extra subscription fees though). 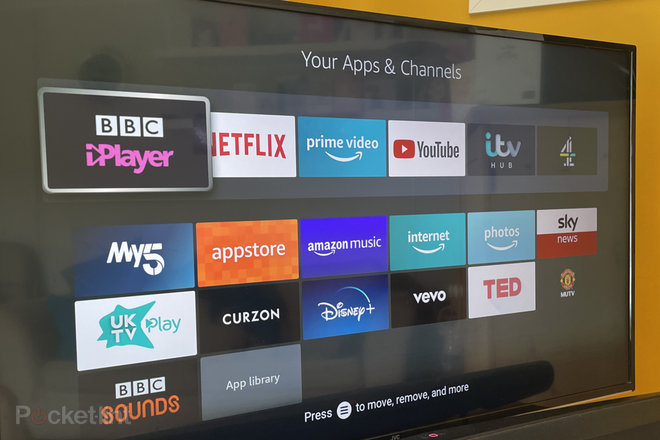 The Fire TV interface – seen on increasing numbers of TVs as well as Amazon’s own devices – has been something of a cluttered experience and Amazon knows it because it’s been redesigned.

The update makes it easier for you to discover new stuff you’ll like and browse for content (like Amazon’s burgeoning live sport offerings), while the home screen is a little easier on the eye. Pinned apps will also be shown in the navigation bar.

There are specific areas for live content plus a category search if you don’t want to use Alexa or spend a lot of time fishing through content.

While the top layer of the new interface works much better, scrolling down still reveals the older-style rows of content. Browsing what’s available there is still a bit of a lottery and it’s still very messy. Trying to browse for something to watch can sometimes feel like a never-ending quest. The solution, of course, is to use Alexa to find what you want. 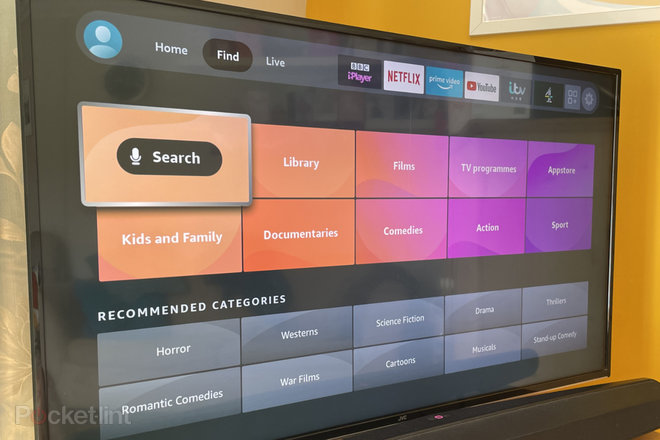 The new Fire TV update also introduced user profiles and, since Alexa can recognise individual voices, you can just ask the assistant to switch to your profile. Profiles actually work pretty well in personalising your experience. If you’ve used them on, say, Netflix, you’ll know how useful they can be, especially if you have kids who need to see a different experience.