As promised earlier this week, AMD released the full Hangar 21 Technology Demo video that’s meant to be a showcase for the brand new RDNA 2-based Radeon RX 6000 GPUs.

The annotated version of the Hangar 21 Technology Demo video provides insight into the specific techniques that were used by AMD. Most of them have been commonplace in games for some time already, such as dynamic area lights, volumetric lights, real-time global illumination, physically based material and shading, volumetric fog, god rays, and depth of field.

In addition to that, there are some FidelityFX effects mixed in with selective use of ray tracing. For instance, FidelityFX Ambient Occlusion (CACAO) is alternated with DXR based ray traced AO, and the same goes for FidelityFX Stochastic Screen Space Reflections (SSSR) which is used in some scenes, whereas in others we find DXR based ray traced reflections. According to AMD, this is the optimal solution to maintain a high level of performance while adding some ray tracing effects.

Beyond sharing the Hangar 21 Technology Demo, AMD also updated its community on the status of FidelityFX. 35 games currently have at least one FidelityFX effect enabled and you can find the full list here.

AMD also revealed that FidelityFX CAS (Contrast Adaptive Sharpening) will be added soon to Horizon Zero Dawn: Complete Edition for PC, making it the second FidelityFX effect in the game after Downsampler (SPD). CAS can be enabled in Horizon Zero Dawn: Complete Edition when TAA is selected as the anti-aliasing method, and you’ll also get to tweak the sharpness level thanks to a slider. Below you’ll find an example screenshot showcasing the difference when turning CAS on. 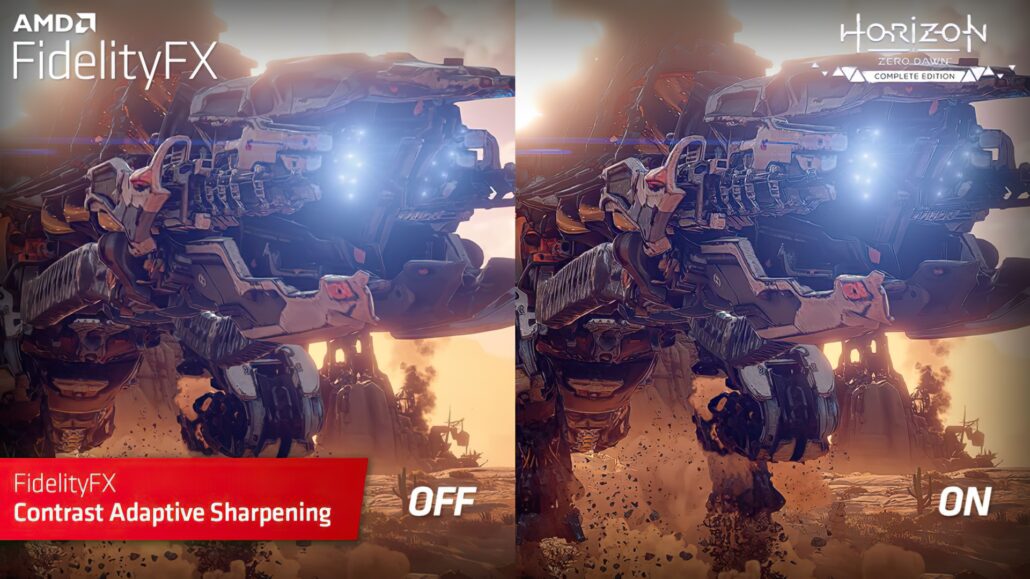 With regards to FidelityFX, the suite of effects has now expanded to include Variable Rate Shading, Denoiser, and Parallel Sort. The first is obviously based on the DirectX 12 Ultimate VRS, which aims to reduce shading intensity where possible in order to save performance; the second is useful to reduce noise issues, which is particularly relevant to ray tracing effects; and the latter is described by AMD as a way for developers to ‘sort data in their frame on the GPU really fast’.

There’s no word on whether the Hangar 21 Technology Demo will ever gets in the hands of the public, but if it does, you’ll learn about it here on Wccftech.