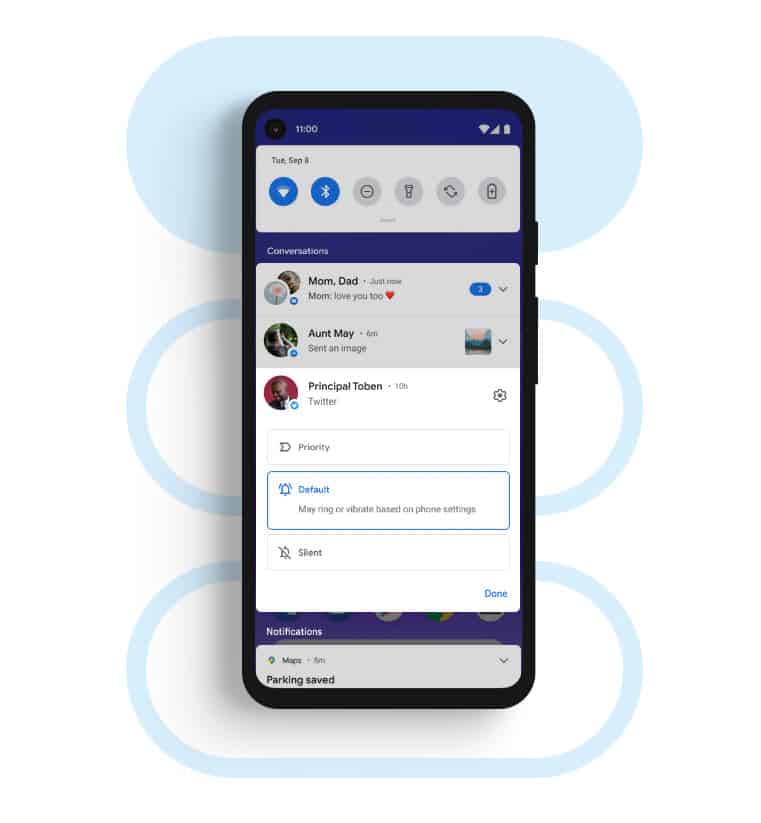 Google has finalized Android 11, making it no longer a beta. Google Pixel devices have already started receiving the final builds of Android 11. And other OEMs/manufacturers have also started the process deploying Android 11 into their phones, although most of them are beta only for now. That’s because most OEMs integrate additional features, apps, UI enhancements on top of what Google makes. So, they will take longer to deliver new Android to their users.

Android 11 introduces a bunch of new features as well as changes to the underlying system APIs. The release is more focused on delivering what matters most to you (the user). Here’s a list of the new additions which you will be able to experience in Android 11.

You will experience the following new features in Android 11 after your OEM delivers an update to your phone.

Your smartphone manufacturer may add additional features under their experience. So, the following will not be a final list of features unless you’re using a Google Pixel or an Android One device (such as those from Nokia and Motorola).

You can also mark selected chats/contacts as Priority, which will push notifications of such chats to the top of the conversations view. All in all, with Android 11, there’s a way lesser chance of you missing your important discussions.

If you have used Facebook Messenger, then you’d be familiar with bubbles already. Bubbles are small chat heads which will stay as an overlay on top of your other apps. You can resume conversations on top of any app by simply tapping on the chat head. And when you’re done, you can once again minimize the conversation to remain as a bubble.

Android 11 is bringing a native solution to record the phone’s screen. Much like the screenshots, you can now record a video of what’s happening on your screen. You may need for the purpose of explanation, proof or simply keeping a reference for yourself. On Android 11, you’ll get the “Screen record” quick toggle on top of the notifications area. Alongside the screen recording, you can also record audio from the phone’s internal speakers, microphone, or both together.

The feature has existed since long on OEM customized skins, including those of Huawei, Samsung, OnePlus, Oppo, Realme, and others. So, essentially, it is only the stock Android devices like Google Pixel, Nokia, and Motorola which will see the feature (natively) for the first time.

Android 11 gives you 1-tap access to select which device plays your media. For example, if you’re playing in headphones, you can instantly switch to connected Bluetooth speakers or even the phone speakers.

Now you do not need to disconnect a connected device to play media via another device. Android 11 just makes things easier and a lot more convenient.

Another significant change in Android 11 is with the permissions. Google has gradually improved permission controls since several Android versions now. Android 11 brings the following fresh enhancements to give users better control over which apps can access private data and for how long. Here’s a look:

With Android 11, you can schedule when Dark Mode or Dark Theme turns on. Instead of having it turned on or off at all times, you can have the convenience of having it enabled at night and disabled during the day. The feature works similarly to how you could schedule Night light in Android 10. You can learn more about it in the following post.

How to Enable Automatic (time-based) Dark Theme in Android 11

The picture in picture mode is also getting an upgrade with Android 11. Did you ever find the Maps in PIP mode to be too small to make for meaningful use? It is solved now! (kind of) The PIP overlay is no longer forced to a fixed size. You can now resize PIP windows from YouTube, Maps, Chrome, and other apps at your convenience and need. Simply drag any of the visible corners to stretch it. Sadly, the max size is still restricted. You can now just make it slightly larger than before.

Android 11 is introducing a redesign of the power menu. Apart from the standard power-off, emergency, and reboot option, the power menu will also load the unified “connected devices” menu. You can control your supported smart home devices such as switches, lights, air conditioners from the Device Controls screen. Simply long-press the power button to get there.

I’m sure we all have experienced that moment when we need to copy something from an app, but there’s no way to select text. Android 11 is solving this problem to some extent. There’s now a way to copy text and images from different apps. For example, I can now download the thumbnail of a YouTube video (see screenshot).

Did you ever accidentally swipe away a notification only to realize that it contained something important? That does happen often with me and Android 11 brings in a fix. You can easily view the Notification History to read the notifications which you have dismissed in the last 24 hours. Remember that Notification history is not enabled by default.

These are some of the most noticeable features in Android 11 for the consumers. There are several other under the hood changes to improve the overall Android experience as well as the connected devices such as Android Auto, Security updates; etc. What do you think of Android 11? Are the new features enough to justify a brand new Android version?