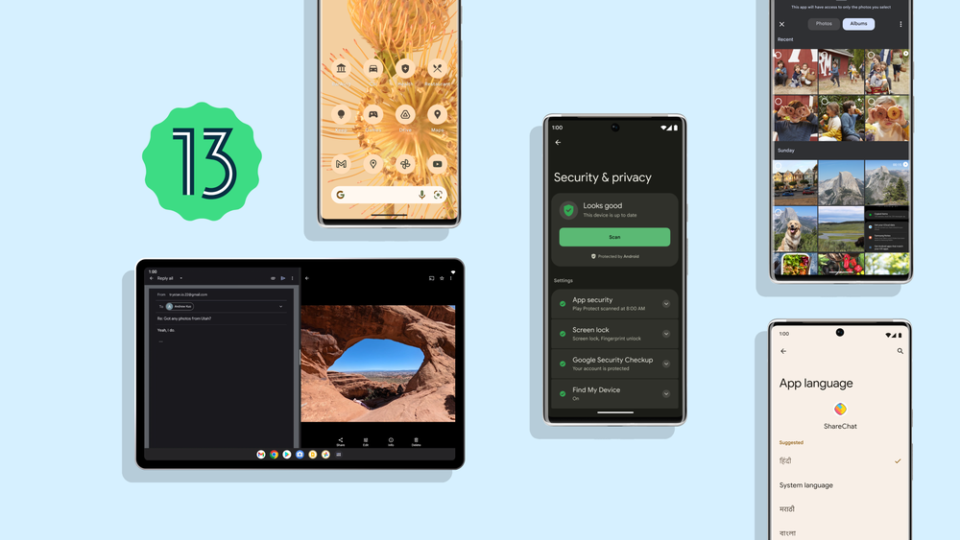 At its I/O 2022 Developer Conference, Google officially unveiled Android 13. Even though the company released the first Android 13 Developer Preview back in February, giving us an idea of what to expect from the company’s major OS update, this was the first time Google executives officially talked about the features and changes coming to the new operating system. Though the new Android 13 update isn’t as major of an update as the last year’s Android 12 (which brought a visual change with Material You UI), it builds on the foundation laid by Android 12 and brings a number of new features and changes. Here are the best Android 13 features we’ve spotted so far:

Google has added a ton of security and privacy features to Android 13. The new OS builds on the Security & Privacy settings page that Android 12 brought and now gives the user a clear color-coded indicator of their safety status. It will also provide the user guidance and steps that they can take to boost their smartphone’s security.

In addition, there are a number of other security changes as well. For example, an app no longer needs to access the location in order to enable Wi-Fi scanning. While Android already sends you a notification when an app accesses the Clipboard, Android 13 goes even further and automatically deletes the Clipboard history after a short period of time. There are a number of other notable privacy and security changes as well. We’ve discussed all of them (in great detail) down below.

One of the key highlights of this year’s I/O was the new and revamped Google Wallet — yes, Google is bringing back the Wallet. The new Google Wallet functions much like its counterpart Apple Wallet and can now store almost all sorts of cards and keys. You can store your credit/debit cards, transit passes, office IDs, vaccine certificates, car keys, boarding passes, hotel keys, and student IDs in the new Google Wallet.

You can now digitally share cards via NFC or a QR code instead of physically handing your phone over to the person checking it. The Wallet now has deeper integration with other Google apps as well. For example, if you have a transit card stored in your Google Wallet, your card and balance will automatically show up in apps such as Google Maps when you search for directions. However, the new Wallet is not an Android 13 exclusive feature. Google says it will expand the revamped Google Wallet to all the Android smartphones running Android Lollipop (version 5.0) and up.

For those who don’t want their phone’s theme to match the colors of their wallpaper, Android 13 now allows you to pick a preset color scheme for your smartphone. Moreover, “Themed icons” are no longer limited to first-part Google apps. In Android 13, you can color themes to the third-party apps as well. In addition, there are a number of subtle design tweaks here and there.

Google made a number of major updates to the interface in Android 12L. Android 13 picks up right where Android 12L left off as Google has brought official support for split-screen with the new update. You can now drag and drop apps from the toolbar to open them side-by-side. You can even drag and drop files between two apps in split-screen mode. Google says it is updating more than 20 first-party apps to take full advantage of the extra space and is working with a number of third-party app developers, including TikTok, Zoom, Facebook, and many others, to optimize their Android apps for the big screen. The company adds that the Play Store will also start displaying tablet-optimized apps first, starting with Android 13.

Chromecast allows you to watch content on the big screen in just a couple of taps. Google says millions of people use the Chromecast feature daily, and now it is extending casting capabilities to new partners and products. You will now be able to cast content on your Chromebook or even your car.

Undoubtedly, Android has a far better notification system than iOS. However, one of the pain points of Google’s operating system is that it allows all the apps and services to send notifications by default. If you want to disable an app’s notification, you’ll have to do it manually. Not anymore, as in Android 13, apps must get your permission before sending you notifications.

Google is putting more restrictions on how much personal data apps can access by default. Now, instead of permitting access to “Files and media,” which basically gave access to all the data stored on the phone, there are two new categories you can control access to: “Photos & videos” and “Music & audio.” Android 13 features a new Photo Picker as well that gives access to only select photos to an app. It’s discussed in more detail down below.

Android 13 comes with a new-looking Photo Picker UI. The new Photo Picker API will allow users to share select photos and videos without allowing the app to see all the photos on your device. This is basically an extension of Android’s Document picker that lets users a document without allowing the app to access all of the documents on the device. Google says it will bring this feature to all the devices with Android 11 and above through Google Play system updates.

End-to-End Encryption for Group Chats With RCS in Messages

Google has added a number of features to the clipboard in Android 13. Now, when you copy something, you will notice a small floating panel that will come up towards the bottom of your display. This floating panel allows you to view and edit the contents of your clipboard without pasting it anywhere. You will also get relevant options depending upon the type of content you copy. For example, you’ll see a browser option if you copy a link. Similarly, you’ll see a photo editor option if you copy an image.

In addition to this, Google is bringing another Apple ecosystem-like feature. Now, you can copy anything on your phone and paste it directly onto your tablet. Talking about the Chromebook, Google says that you will be able to stream apps directly from your phone to Chromebooks later this year. “You’ll be able to send and reply to messages, view your conversation history and launch your messaging apps from your laptop,” says the company.

From payment to placing an order, QR codes are being used everywhere. Believe it or not, many people have to rely on third-party apps just to scan a QR code. Google is making the life of those people much easier with Android 13 as the company has added a dedicated QR code scanner to the quick settings on Android 13. You can now just swipe down and scan a QR code with just a couple of taps.