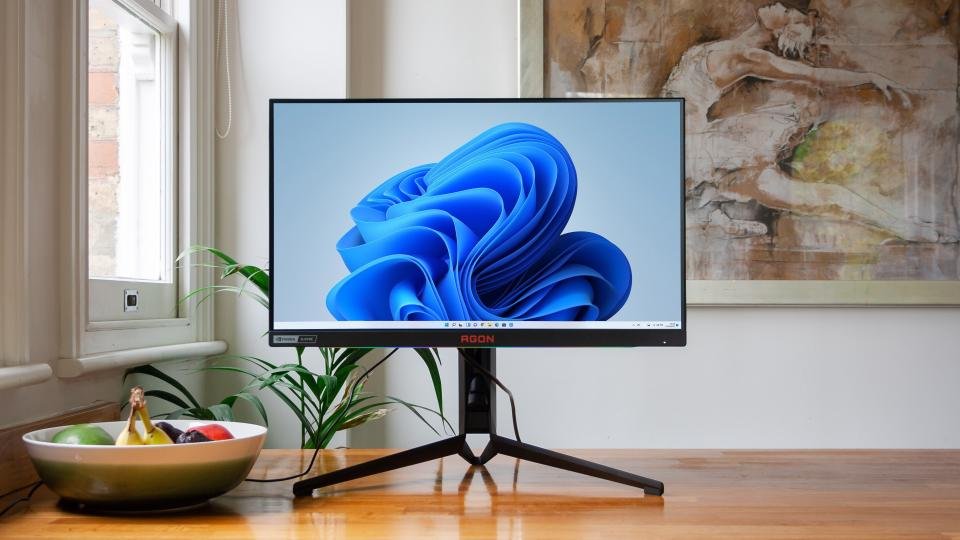 It’s expensive and a bit ugly, but the AOC AGON Pro AG254FG is a 360Hz beast of a monitor

The AOC AGON Pro AG254FG is a tiny monitor with a steep price. Why does it cost so much, you ask? This 24in 1080p panel has a 360Hz refresh rate, making it one of a small number of elite monitors built for gamers who crave the fastest panel around.

This monitor isn’t for everyone: unless you’re the proud owner of a seriously beefy gaming PC that can muster 360fps in the latest games, the wiser choice would be to spend that cash on a larger monitor that gives a more expansive view and places lesser demands on your system.

If you’re one of the lucky few for whom this monitor makes sense, however, the AOC AGON Pro AG254FG is excellent. Effortlessly fast and surprisingly practical, this esports display certainly earns its price – and our recommendation, too.

AOC AGON Pro AG254FG review: What do you get for the money?

At £700, the AOC AGON Pro AG254FG is a serious investment. For the money, you’re getting a 24.5in IPS panel with a resolution of 1,920 x 1,080, a maximum refresh rate of 360Hz, a quoted response time of 1ms G2G, a VESA DisplayHDR 400 certification and Nvidia G-Sync support. This monitor is also Nvidia Reflex-compatible, which means that you can theoretically enjoy lower system latency (the time delay between mouse/keyboard inputs and onscreen action) for the most responsive gaming experience possible. 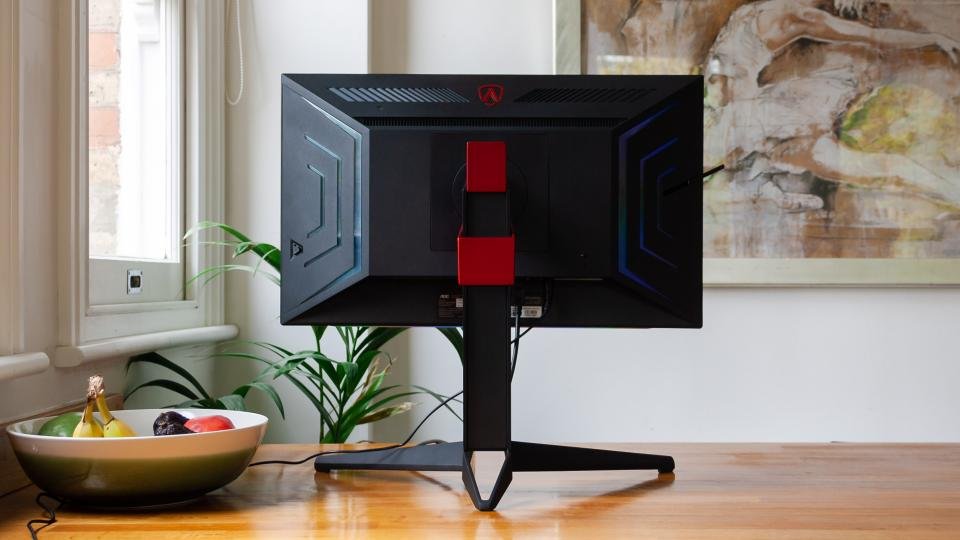 On the rear you’ll find two HDMI 2.0 ports and one DP 1.4 port for video duties. You’ll also find four USB-A 3.2 Gen 1 ports, one of which lets you analyse the input lag of a connected mouse via Nvidia Reflex. There’s also one USB-B 3.2 Gen 1 port to link the USB-A ports with your PC/laptop, a micro-USB port for the “Quick Switch” remote control, and three 3.5mm jacks for the mic-in, mic-out and headphone connections.

The spindly legged stand provides 130mm of height adjustment, 90 degrees of pivot into portrait mode, 30 degrees of swivel left and right and 23 degrees of backwards tilt. There’s also a monitor hood and wired remote control in the box plus DP, USB-A to USB-B and microphone cables.

AOC AGON Pro AG254FG review: What does it do well?

This monitor is incredibly well equipped on the ports front: a four-port USB hub (if you count the Nvidia Reflex port) is nothing to be sniffed at. The Quick Switch remote control is similarly thoughtful: save your preferred monitor settings as profiles and you can hop between them – and navigate the OSD – almost instantly using the small wired puck that comes with the monitor. 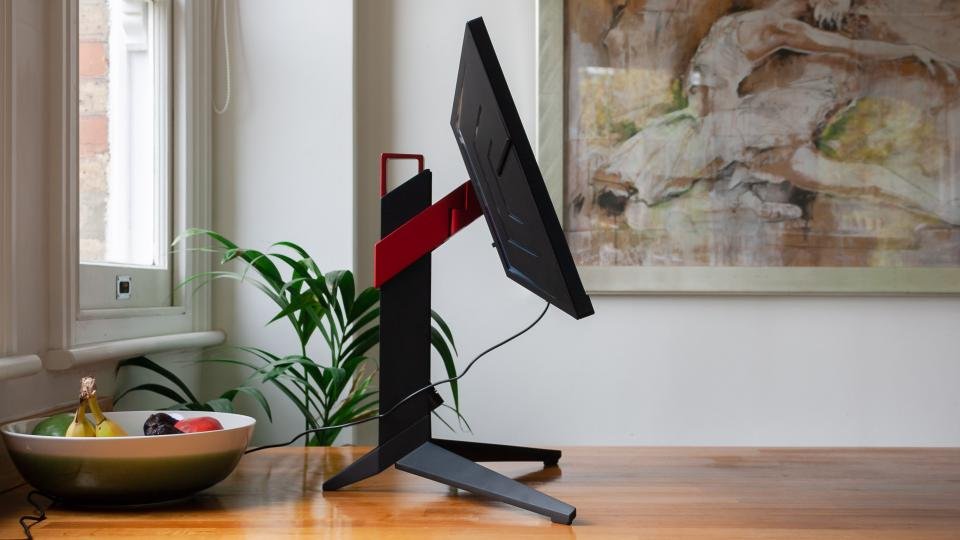 As you’d expect from a monitor this expensive, the stand is fully featured, with all four adjustment options providing enough height, tilt, swivel and pivot adjustability to ensure a comfortable view during the longest gaming marathons. That said, I’m not sure that the AG254FG needs to be able to pivot into Portrait mode, but it ticks the box anyway.

The AOC wears its gaming credentials on its sleeve – or rather, on its stand. A built-in projector fires the AOC AGON logo onto the surface between the stand legs, and LED lights line the rear and bottom of the panel – these are about as gaudy as the projector, but they’re sure to appeal to the RGB-obsessed gamer. The whole lot can be controlled within the OSD, which despite looking slightly dated is perfectly easy to navigate with either the simple joystick or bundled remote control.

It’s the AOC AGON Pro AG254FG’s performance that’s out of this world, however. The bottom line is that this is a phenomenally responsive panel, one that ticks every box for the discerning pro gamer. Putting the panel through BlurBusters’ basic motion blur test indicated that, with Overdrive switched off, the AG254FG produces very little blur at all. As you’d expect, increasing the strength of the Overdrive setting produces a bit of ghosting, which we suspect is why most of this monitor’s gaming presets lock Overdrive at “Weak” – it’s a nice halfway house. 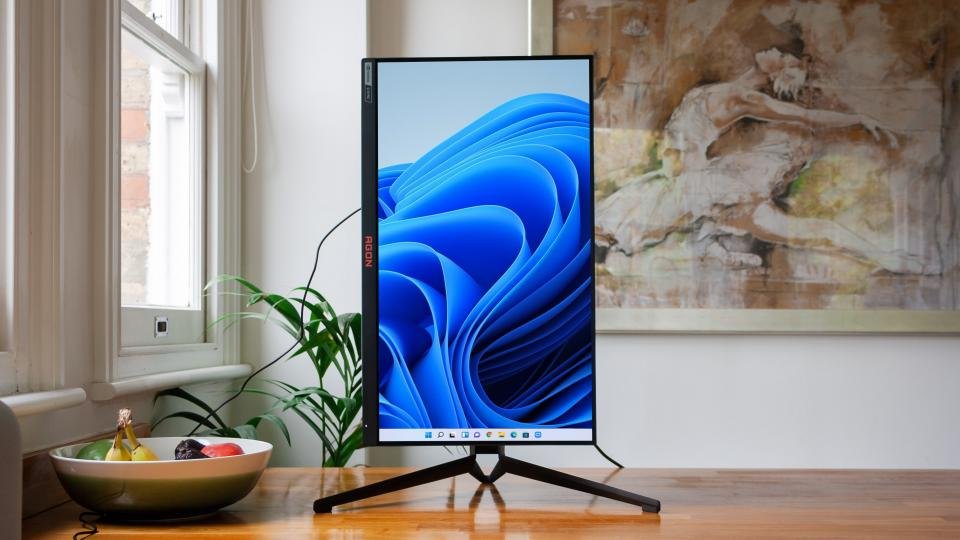 This monitor also has an ultra-low motion blur (ULMB) mode available at 144Hz or 240Hz with Nvidia G-Sync disabled. Switching ULMB on drastically improves the clarity of moving images but locks the brightness to a maximum of 101cd/m², so you’ll want to make liberal use of the monitor hood. This is to be expected, however, and it doesn’t detract from the remarkable motion clarity that ULMB provides.

Anecdotally, gaming on the AG254FG is a pleasure. Sure, my rig can’t reach 360Hz consistently (or at all) but it’s still impressive how fluid and responsive this monitor is. I tried various shooters – including Borderlands 3, Doom (2016) and Battlefield V – and was more than satisfied with the experience the AG254FG delivered.

Despite its gaming credentials, colour accuracy hasn’t fallen by the wayside. In its default mode, the AG254FG produced an average Delta E of 0.98 when tested against sRGB, which makes for natural-looking colour reproduction. It’s also impressively bright when it needs to be, topping out at 452cd/m² with HDR enabled in a 10% white window.

AOC AGON Pro AG254FG review: What could be better?

It’s a shame, then, that the AG254FG’s panel isn’t a tad more vibrant. Regardless of mode, the AG254FG on test here produced 91% of the sRGB colour gamut, which equates to 64% of the DCI-P3 gamut. This won’t matter much to the kind of gamers who are eyeing this monitor up – the sRGB coverage is ample for pro-gaming duties – but it’s disappointing given the DisplayHDR 400 certification. While the AOC certainly reaches its certified brightness levels, the panel’s narrow colour gamut prevents colours from looking as vivid as they should in SDR or HDR. 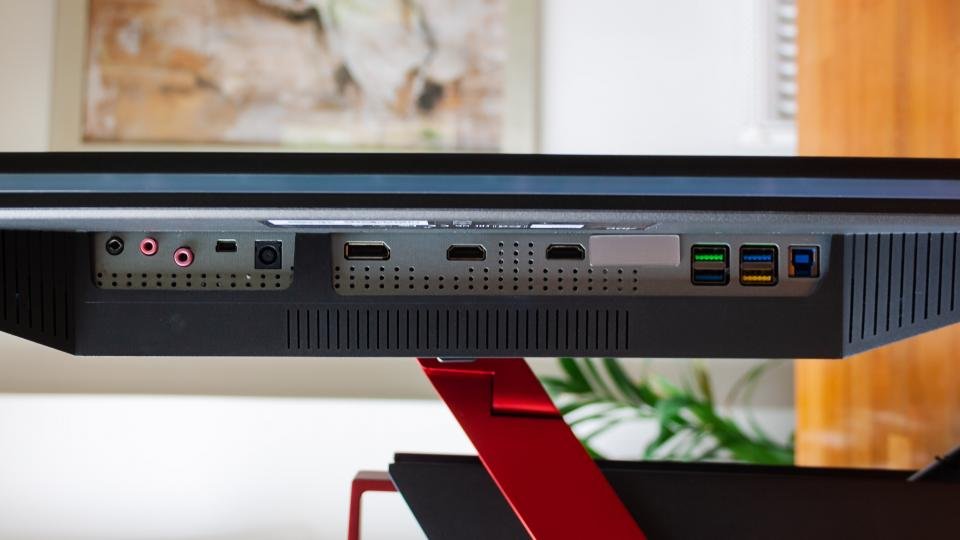 I’m also not overly fond of AOC’s design. It’s not particularly offensive from the front – where only the large AGON logo punctuates the matte black paint job – but the metallic red finish on the stand looks dated, as does the boxy, angular cabinet. The RGB lighting is hidden beneath similarly tacky translucent plastic strips. For this kind of money, I’d hope for something a bit classier.

AOC AGON Pro AG254FG review: Should you buy it?

I sincerely hope that AOC rethinks its approach to monitor design, because if the AG254FG’s design was as exemplary as its responsiveness, it would be a frighteningly impressive bit of kit. It’s hard to be too critical, however. After all, looks hardly matter when you’re enjoying the benefits of a 360Hz panel, a versatile stand and a good selection of ports.

Yes, this is an undeniably expensive monitor, but that’s very much par for the course where ultra-high refresh rate esports displays are concerned. Assuming you can bear the expense – which is likely if you’re eyeing up a monitor such as this one – the AG254FG may just give you the competitive edge you’ve been dreaming of.