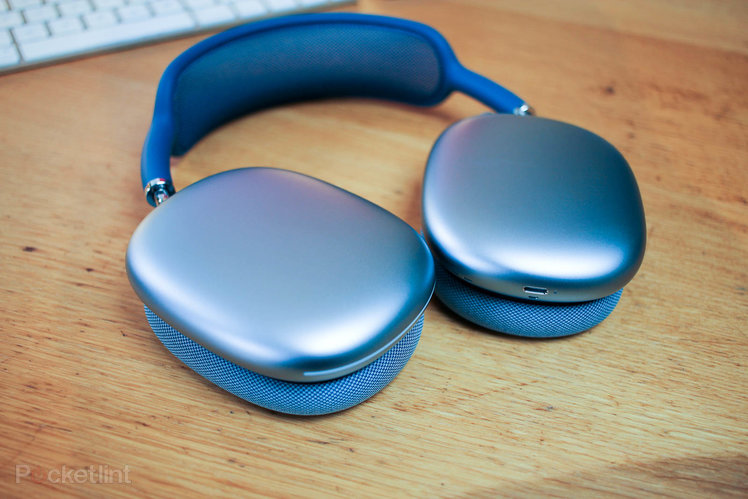 The Apple AirPods Max is the company’s first over-ear headphones in the AirPods range, complete with active noise-cancelling (ANC) and many of the same technologies as found on the in-ear AirPods Pro.

But given a super-competitive market in the over-ear headphone space from companies like Sony and Bose, can Apple achieve the same success already enjoyed by the AirPods range?

We’ve been using the Apple over-ear headphones in a variety of environments and situations to find out whether or not the steep asking price is justifiable.

The AirPods and AirPods Pro were all about those white plastic teardrops in your ears, but that’s definitely not the case with the Max. There is no white plastic – or any plastic for that matter – to be found here, as the material has been banished from the Max’s design. Instead you’ll find two stainless steel earcups, which house drivers, and a silicone-coated stainless steel headband.

The AirPods Max come in a choice of five different colours, expanding beyond the usual black or silver much of the market offers. The metal takes a subtle hue from the colour you’ve picked – much like the iPad Air‘s design – while the silicone covering on the headband and fabric mesh delivers the real colour punch. The detachable soft fabric earcups are also colour matching with “L” and “R” woven into the fabric inside.

Pictured is the Sky Blue variant, which has a premium look that’s certainly in no way cheap looking. The colour choice is also echoed in the accompanying carry case. The headphones are designed to fit all sizes of head and hair, and within the headband is a retractable rod that is stiff enough to hold in place when extended without the need for ratchets or grooves.

Buttons are kept to a minimum and emulate the Apple Watch in terms of operability – there’s a Noise Control button to switch between noise cancelling mode (on, off, transparent/ambient), and a larger version of the digital crown to control volume and give you play/pause functions. We’ve found ourselves pressing that Noise Control button from time to time when positioning the headphones on our head, which could be annoying over time. If buttons aren’t your thing you can also talk to Siri. 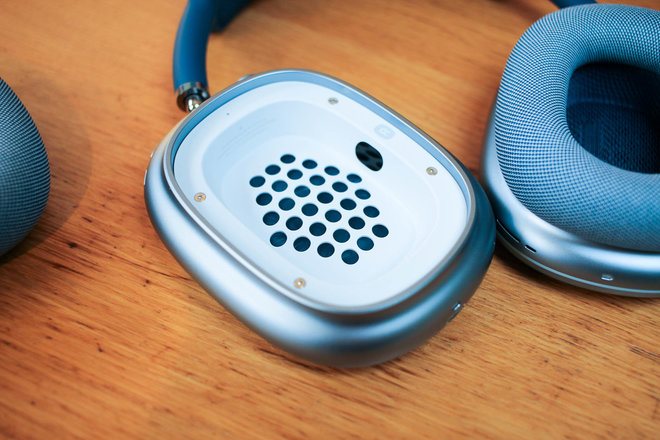 While there aren’t many buttons there are plenty of holes in the metal shell, to allow the eight microphones to hear what’s going on and cancel the noise accordingly, as part of the ANC system.

It’s worth noting though that none of those holes is a 3.5mm headphone socket – there’s only a Lightning connection on these headphones. If you’re looking to connect these over-ears to a plane’s infotainment system, you’ll have to buy a Lightning-to-headphone adapter, otherwise you’re looking at using Bluetooth (or something like the RHA Flight Adapter could solve your conundrum).

The AirPods Max hits the scales heavier than most, so we’ve certainly noticed the weight. At 384g It’s not heavy enough to ruin the experience, but you might notice the ‘downforce’ compared to a pair that predominately uses plastic for the build. Sitting on the sofa, at your desk, or on a plane should be fine – but when moving around you do feel it, making for a different experience compared to something like the excellent Beats Studio 3. 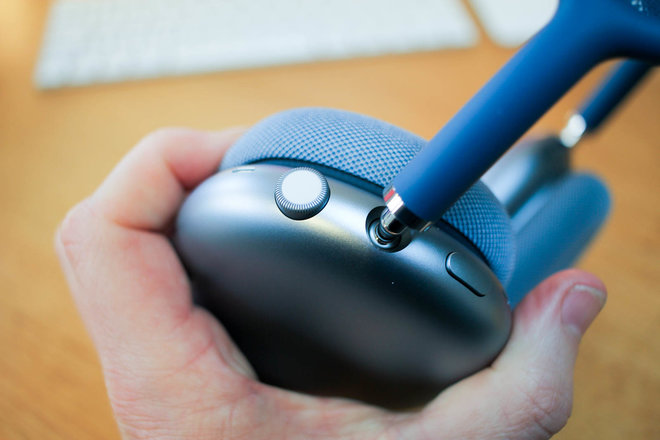 Concerns over how hot the AirPods Max get over time doesn’t seem to have materialised. We’ve worn these over-ears during a full working day, andaside from the weight we haven’t noticed that we’ve got any hotter than we would expect when wearing them.

It’s going to be interesting seeing how the metal finish survives over time and whether it will be prone to scratching. We do like the ability to detach the earcup for cleaning, and the larger rectangular design certainly fits our ears nicely, which isn’t something that canalways be said for other designs like Apple’s own Beats Studio 3. 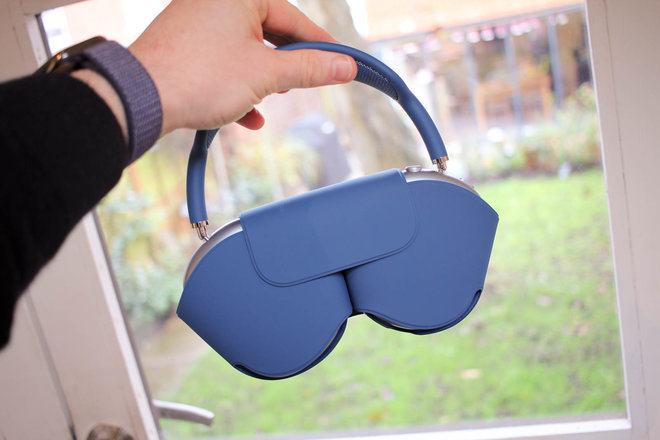 The carry case is lightweight, but we suspect many frequent travellers will want to look at something more robust, because it only really covers the ear cups rather than the whole assembly, meaning the headband will still be prone to catching on things in your bag and eventually ripping.

There’s no doubting that the sound of the AirPods Max is exceptional, as you would expect given the high price. Everything we’ve listened to sounds great, with a very natural sound rather than something that is too light or too bass heavy. 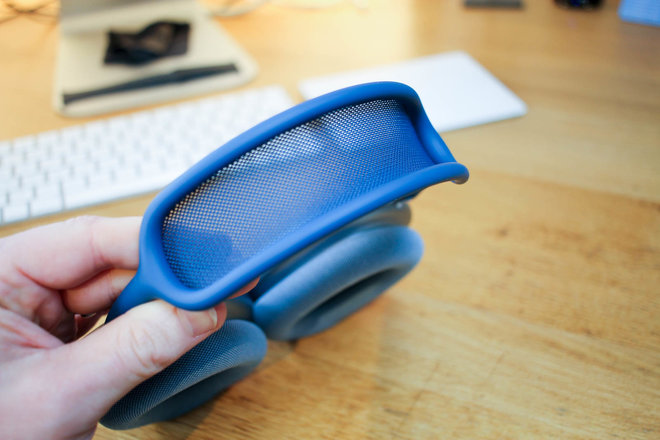 There’s no distortion at high levels, and just like the AirPods Pro – which, since launch, we’ve been using daily – the active noise-cancelling is fantastic. You really won’t be able to hear what’s going on around you when you’re blasting out hit after hit.

Also like the AirPods Pro, there are plenty of virtualisation tricks going on including spatial audio with dynamic head tracking (when available), which will mean that you can move your head without the sound field moving, designed to give you a more theatre-like experience – more on this Spatial Audio in a bit.

The Max has two of Apple’s H1 processors on board to handle all the computational audio going on. Of course, there’s the simple connection across your Apple devices that other AirPods are famed for too. 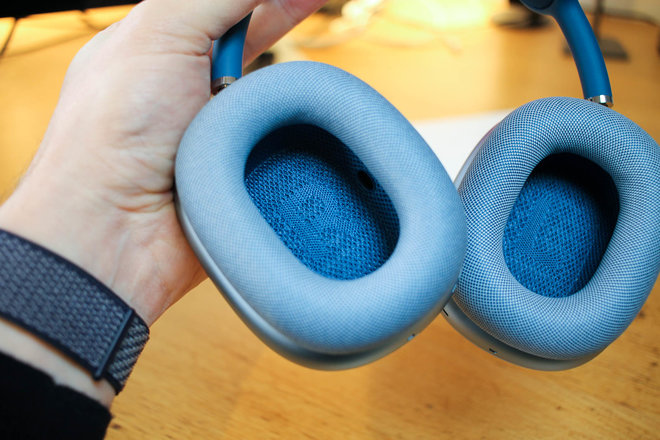 Trebles, mid-tones, and bass are all nicely delivered, and unlike Apple’s Beat’s brand which veers towards a more bass heavy sound, Apple appears to have gone for a more natural feel to the experience, more akin to the approach taken with its HomePod range of speakers.There doesn’t appear to be any way to adapt or customise the sound output, though, and you could argue that the volume doesn’t go loud enough – but that’s sometimes an issue with Bluetooth based on source material and limitations.

The listening experience goes well beyond listening to music these days, so Apple has introduced something it calls Spatial Audio. Already found on the AirPods Pro, the experience creates a theatre-like experience to surround you in sound rather than just sounding like stereo coming from the left and right channels.

The system currently only works with the iPhone and iPad, but not Apple TV, and uses the accelerometers and gyroscopes built into both the AirPods Max and your iPhone or iPad to constantly track and compare the motion of your head and your device to understand how they are moving in relation to each other.

What this translates into in real life is that the sounds stay fixed to the device, so when you are watching movies, for example, sound is pinned to its source – the roar of an engine comes from the car, while the voice comes from the actor; even as you move your head, or as the bus you are in turns the corner.

It’s incredibly clever and works really well, especially when you’re watching a something on the iPad in 5.1, 7.1 or Dobly Atmos. In fact you’ll wonder how you coped previously, and even possibly start questioning your main TV setup, so it’s sad that it’s not supported by the Apple TV. We can only hope this will be added in a future update.

Apple promises 20 hours of listening (with ANC active), with the ability to get 90 minutes from a five-minute charge. 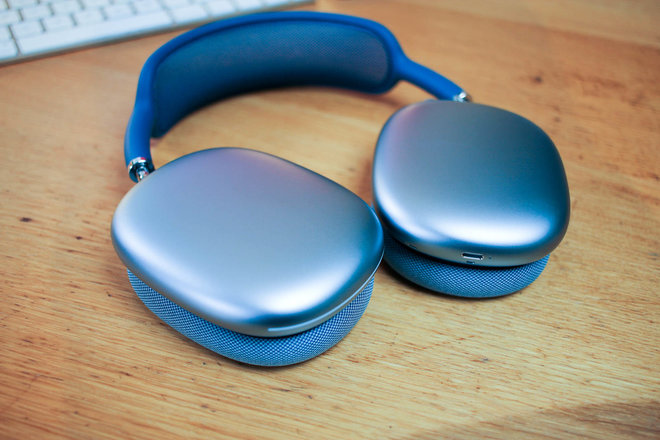 Charging is via a Lightning to USB-C cable (included in the box), but like other Apple devices you don’t get a plug in the box.

So far we’ve enjoyed long battery life, but we have ensured that we’ve put these headphones back in the case when not in use. That’s important, because if you don’t then the low power mode doesn’t kick in and you might find that when you come back the power has drained more than you were expecting.

This is going to be the big sticking point for many people. The AirPods Max at launch cost $549/£549. That’s almost same price as a PlayStation 5, and means Apple is expecting customers to pay a huge premium compared to other headphone offerings already on the market from the likes of Sony, Bose and others.

It’s fair to say that you are somewhat paying the famous “Apple Tax” here, but we suspect that won’t stop people buying, or at least lusting, after the Max once those who sit at the front of the airplane are regularly spotted wearing a pair.