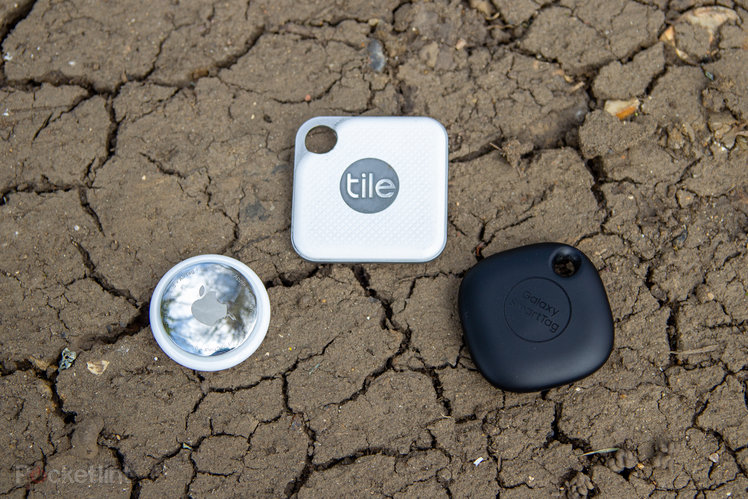 After many years of rumours, Apple has joined the tracking fray, moving into the market that was very much established by Tile.

Samsung’s Galaxy SmartTag and SmartTag+ was announced in early 2021, but is actually a second-gen device from Samsung, who originally launched the SmartThings Tracker, an LTE device, in 2018.

Suddenly the Bluetooth tracker market is a congested space, so here’s how these three platforms compare. 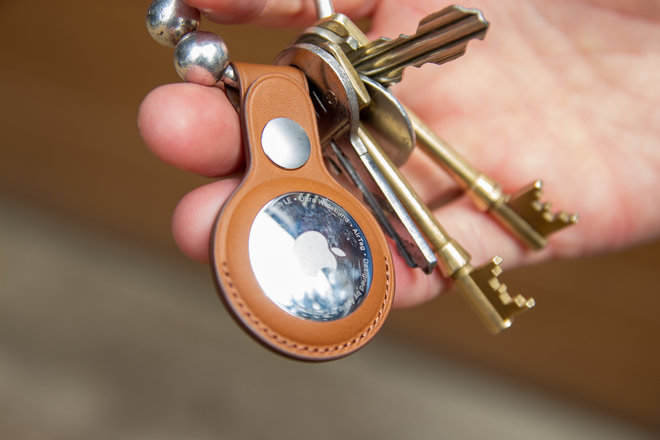 Apple requires you to use an Apple ID for your iPhone (meaning there’s potential for all iPhones to find an AirTag), but Samsung doesn’t require the use of a Samsung Account on a Galaxy device.

For Galaxy SmartTag to work, you have to be signed into a Samsung Account, so there is the potential that not all Samsung phones will detect Galaxy SmartTag, because some people will choose not to use the Samsung account.

This means Apple’s network is potentially larger, the billion iOS devices that Apple likes to talk about.

Tile, on the other hand has a brand agnostic approach and can be used by iPhone or Android devices. This opens the doors to all devices able to locate Tiles, but there’s a catch here: only Tile users with the app installed will detect a Tile.

That means that Tile is simply limited by the number of current active users, facing a bigger challenge than Samsung, but with Apple having a clear advantage with the sheer number of potential detection devices.

How these services work

In essence, there’s very little difference in how these devices actually work. All use Bluetooth Low Energy (BLE) to maintain a connection to the tracker device, logging the location from the phone’s location data so it knows where that device is.

While you’re in contact with the device, you’ll be able to get it to play a sound to locate it.

When you lose a device, you’ll be able to see, in the respective app, the last location where you were connected to that device.

If you lose a device, the process is much the same again. You can mark the item as lost, at which point, if the tracker is detected by compatible phones in the wider network – using BLE in the background – you’ll get an anonymous and secure notification, telling you where your device was found, so you can go and get it.

Bluetooth Low Energy is especially good at this because it needs very little battery power to say “I exist!”, meaning the battery will last for about a year across all these devices.

In essence, all these devices work the same way. 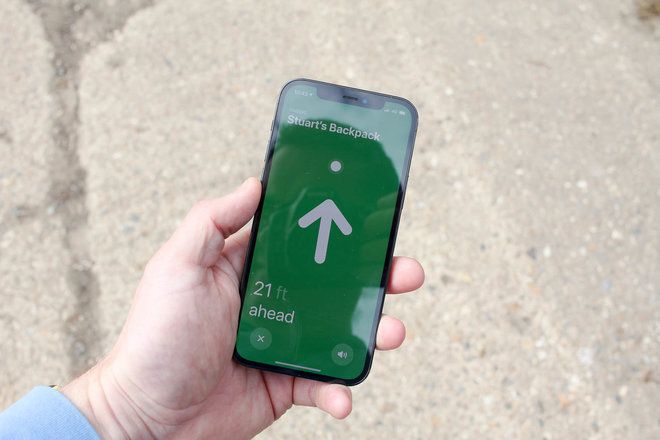 Ultra-wideband – or UWB – plays a part when it comes to precise location finding. This is when you’ve lost your keys at home and you just can’t see them – UWB can guide you to the precise location, giving a precise range, which is a nice feature.

For Apple, this is provided by the U1 chip in both the iPhone 11/12 and the AirTag to give you a graphical guide back to your device. It’s a clever use of this technology but Apple isn’t alone in offering it.

Samsung also offers UWB for precise location tracking, but it launched the Bluetooth-only version of the SmartTag first, with the UWB model only just going on sale. Only the Galaxy SmartTag+ offers UWB, so you have to have the right version to get this function.

Of course, you also need to have a Samsung phone with UWB and that’s currently only the Galaxy Note 20 Ultra, the Galaxy S21+ and the Galaxy S21 Ultra. Again, Apple has put UWB in more devices (iPhone 11 models and iPhone 12 models) so it’s easier for Apple users to take advantage of the advanced UWB tracking.

Tile has made noises about UWB, confirming plans in January 2021, but hasn’t launched a tracker that offers this newer technology. That’s unfortunate timing as there are now two rivals on the market that do offer it.

Again, UWB inclusion in Android devices outside of Samsung is rather rare, so there isn’t a wide userbase for it yet. 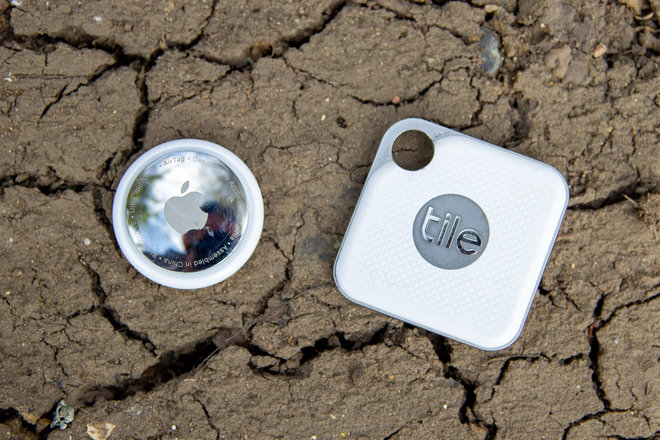 The sizes of these device are close, with AirTag like a round button, Samsung adopting the squircle and tile a square.

The big difference is that Samsung and Tile have a hole in one corner so it’s easy to attach to things, but for Apple, you’ll need to buy an accessory – a whole new market – although Apple seems to have designed the AirTag to be shown off, whereas Tile and Samsung feel like devices you’d have tucked away.

All offer water resistance, Apple with IP67, Tile Pro with IP55 and Samsung with IPX3. Apple is the most waterproof – but it’s worth noting that Tile offers a range of styles, including the Tile Sticker and Tile Slim, which are both completely waterproof.

The AirTag, SmartTag and Tile Pro all use a CR2032 battery which is replaceable.

Apple hasn’t officially declared the range, but both Samsung and Tile give a maximum range of around 120 metres. This is a technical maximum range dictated by Bluetooth, but will be affected by the device you are using to detect it and the environment that you are in. We’ve tested all these devices outdoors on flat ground to compare the range.

Comparing the three devices side by side is revealing. The AirTag is the first to lose contact and we found we needed to be within about 10 metres to be connected to it. The U1 chip will guide you into the precise location when it comes to finding, but you’ll have to be much closer than the other devices to trigger that process.

The Samsung Galaxy SmartTag will make contact about 40 metres away, allowing you to trigger the sound and use the signal detector to get you close to it. 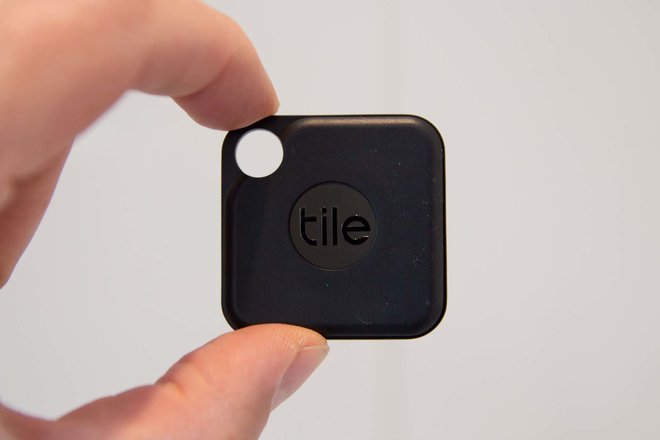 The Tile Pro offers considerably more range and we found it was still in contact about 80 metres away. This would allow us to play the sound to help locate it. Tile Pro’s speaker is also a lot louder, so you’re much more likely to hear it.

The advantage of longer range is you’re much more likely to be connected to the Tile, or reconnect to the Tile when you come close to it – the other devices will rely on others reporting the location or using the last known location to get you close to it. Tile is the easy victor when it comes to range.

While the location tracking features of these devices is similar, there are different functions offered outside of UWB precise location finding.

Apple’s unique feature is the ability to use any NFC device (yes, even an Android phone) to tap an AirTag and get contact details for the owner of that tag – if they’ve provided them. The idea is so you can call the owner if you find their bag. We tested this with a couple of Android phones, however, and it didn’t work.

Apple also has a feature that will let you know if you appear to be moving around with an unrecognised AirTag. This is to stop someone slipping one into your bag so they can track you. Samsung also offers the same feature. 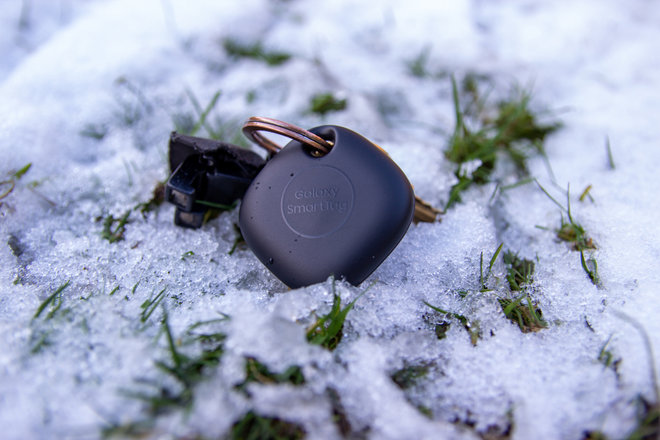 Samsung’s unique feature is that the button on it is programmable. A double press will ring your phone, in case you’ve lost that, which Tile also offers.

Samsung goes further allowing single press and long press functions, which can trigger SmartThings actions. For example, you can long press the button to turn on your SmartThings-compatible home security cameras, or your welcome home lights – or whatever, as long as it’s in SmartThings. Of course, the SmartTag need to be connected to your phone for this to work.

Tile offers a collection of Premium features which cost extra ($2.99/mo). The most useful of these is the Smart Alert which is notify you if you leave something behind. This is the notification which would tell you that you have left your keys in the coffee shop. It’s basically a disconnection alert when you’re separated from your Tile.

Tile also allows sharing of Tiles. This will let you share a Tile with someone else so they can help you locate it. This is great if you have two of you wanting to find the car keys, for example. You don’t need the Tile owner at home, the shared person can find it themselves.

Tile’s Premium offering also includes things like free battery replacement, although the batteries aren’t hard to buy or expensive, so that’s unlikely to be a key motivator for paying a subscription.

Of all these things, Tile’s Smart Alert is the most useful, telling you when you’ve left something behind.

What about third-party devices?

Tile works with a number of other devices – HP, Skullcandy, Fitbit, Bose, and more – to offer a wider system. Tile has been building this system to broaden the appeal of Tile and pull together devices that otherwise might not have such tracking offered.

Tile also keeps track of phones that have the Tile app installed on it, as they are effectively another Tile device.

Apple, of course, uses Find My to locate all devices that you’ve signed into – AirPods, iPad, MacBook and so on. Apple has recently announced third-party compatibility through the Works with Find My programme.

This includes Van Moof bicycles, for example – but given the size of the Apple network, is likely to see wide adoption.

Samsung offers similar through SmartThings Find, keeping track of your Samsung Buds for example, as well as your SmartTag, but it isn’t as far reaching as Tile or Apple in this sense. 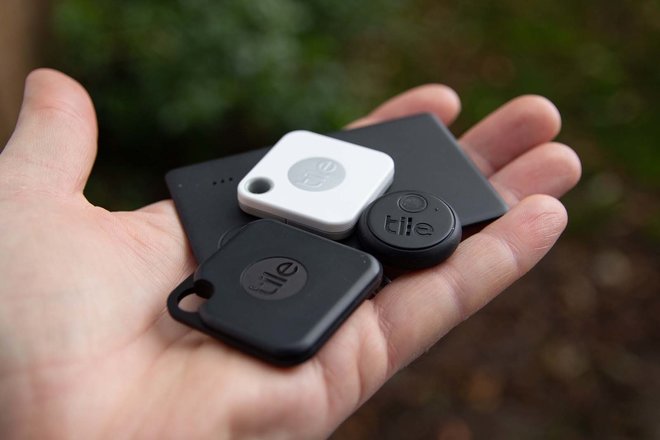 Apple’s AirTag comes in one style which does everything. That makes it cheaper and simpler to choose, but you’ll need to buy an accessory if you actually want to attach it to something. Samsung’s Galaxy SmartTag is the same price – but the SmartTag+ including UWB, i.e., the equivalent of Apple’s device, is £10 more.

We suspect Samsung will be forced to adjust the price to make it competitive with Apple.

Tile starts cheaper than all the others, but this is for the Tile Mate. The Tile Pro is the same price, while there are options for the Tile Slim (a card which will fit into your wallet) and the Tile Sticker which is small and adhesive and can be attached to anything, but have to be bought in packs.

Ultimately, Tile offers way more options than other providers, giving you a lot more versatility in how your tracking can be arranged – but some devices don’t have swappable batteries, so once they are dead, they are dead.

Apple’s big play here is the size of the network. It plays exactly into what Apple is good at, which is having all its devices aligned and drawing them all in to play a part. Ultimately, that’s probably going to make the AirTag a no-brainer for Apple users, bearing in mind that if you leave Apple, your AirTag will then be redundant. With third-party integration, the Find My network is only set to expand, but the effective detection range of the AirTag is so much shorter than other devices.

Tile has a lot to offer: cross-platform compatibility, choice of device to suit a wider range of use cases, and a much longer working range. Tile stands to benefit the most if Apple and Samsung’s move into the market alerts people to Bluetooth tracking and convinces people that Tile’s solution suits them better.

Samsung’s limitation is the requirement to be using the Samsung account: if it worked with all Samsung phones just using a Google account, it would potentially rival Apple’s device reach. Currently, if you leave Samsung for a different Android device, your Galaxy SmartTag would become useless.

In terms of the technology itself, at its core there’s very little difference between them: both Samsung and Apple have used the system that Tile established and refined over the best part of a decade and given it a twist. But Tile’s experience shows with the effective range of its devices.