A very impressive smart speaker from Apple and, for once, the price isn’t too high

The HomePod mini was a bit of a surprise when Apple launched it alongside the iPhone 12 and chums in October 2020. Not because a HomePod update hadn’t been expected but because it was so affordable.

It’s the cheapest product – aside from a smartphone cable or case – that I can remember Apple releasing for years; not only that but it’s also among the very best.

Apple HomePod mini review: What you need to know

On the surface, the HomePod mini looks like the perfect antidote to Google’s Nest Audio and Amazon’s ubiquitous Echo speakers and it has plenty in common with those speakers, too.

Just like its rivals, the HomePod mini is a low-cost smart speaker that can be controlled using just your voice. Here, you’re being served by mild-mannered Siri instead of Alexa or Google Assistant. And, as you’d expect of any smart speaker, the HomePod can be used to play music, radio and podcasts, control smart home tech such as lightbulbs or smart plugs; plus you can ask it questions about stuff like the weather, news, or the traffic. You can also stream music directly to the HomePod mini via AirPlay 2 and, although there is Bluetooth tech in the speaker, this can’t be used to play music from non-iOS devices. You’ll need an iPhone or iPad to set up the HomePod mini and make the most of it thereafter.

The key thing to remember with the HomePod mini, though, is that while its rivals can be used on whatever phone you fancy, the HomePod mini is a smart speaker designed almost exclusively for users of Apple devices.

At £99, the HomePod mini is just about in impulse-buy territory. Importantly, you’re not paying a huge premium as you might with other Apple products as it’s only £10 more expensive than the Amazon Echo and the Google Nest Audio. The HomePod mini is the smallest of the three rival speakers. It’s absolutely tiny, measuring a mere 84mm tall and 98mm in diameter. That’s around half the height of the Nest Audio (175mm) and significantly smaller than the 4th-generation Echo. In fact, the Apple HomePod mini is fractionally smaller than the 4th generation Echo Dot, although only by a few millimetres.

As has become the fashion, the HomePod mini is wrapped in smart-looking textured fabric (available in white or grey). It has a rubber base to stop the speaker sliding around surfaces and a captive, braided power cable emerging from the rear of the speaker. This is terminated with a USB-C plug so you could plug it into a power bank to provide power (assuming it can output 20W) – although Apple does at least provide a mains adapter with this device.

On the top of the speaker is a circular, backlit touch-sensitive control surface. As with the original HomePod, this is illuminated by multicoloured LEDs, which move and change colour depending on what the speaker is doing.

You can tap the plus and minus symbols on either side of this surface to adjust volume up and down, while a series of taps in the centre let you perform various actions. A single tap plays or pauses, a double-tap skips tracks, a triple-tap skips back, and a long press activates Siri. It’s much easier, obviously, to use the wake phrase “hey Siri” and ask the in-built voice assistant to do this.

That is pretty much it for physical features and there’s not, truth be told, much difference between this and its rival smart speakers on this front. The one area where you might say the Echo has the edge is that it has a 3.5mm input/output aux port on the rear allowing the speaker to serve as a source for more accomplished speakers or as a wired output for a guest’s phone or tablet.

Where the HomePod mini beats its rivals is in how easy it is to set up. Just plug it in, bring an iPhone or iPad close by and up pops a setup window. Follow the instructions and you’ll be ready and raring to go in a couple of minutes.

Stereo pairing two HomePod mini speakers is just as easy and, in general, using the speaker is simplicity itself. It’s certainly a lot more straightforward to use than Amazon’s Echo speakers are. There’s nothing like the overblown and over-complicated Alexa app here; it’s all neatly built into the fabric of iOS, with typically tight integration.

As well as the usual trivia and music playback requests, you can ask Siri for directions on the HomePod and those will be synchronised as a suggestion the next time you open Apple Maps on your phone. You can transcribe notes, which later appear in the Notes app on your iPhone, add reminders and tasks, get news updates and call or send messages to contacts. It’s also now possible to use multiple Apple HomePod speakers in an intercom-like system. This is similar to Google’s one-way Broadcast feature, albeit with a touch more flexibility. You can send messages to specific devices, for instance, where Google’s speakers simply blanket broadcast. However, you can’t carry out a two-way conversation as you can with a pair of Amazon Echo speakers.

Later in the year, Apple is expanding this to a richer suite of music controls that change depending on how close to the speaker you are. Approaching the HomePod mini while it’s playing music, for instance, will generate a popup on your phone, which you can tap to expand for music controls. Alternatively, if you continue to move closer, the popup will expand automatically. All good stuff. Alas, there’s also a pretty long list of stuff that Siri and, by extension, the HomePod mini isn’t so good at. Google Assistant, for instance, remains the king when it comes to answering general queries and, in my experience, it’s better at natural language recognition than Siri; Alexa-based speakers, on the other hand, have a wider range of third-party smart tech hardware available to them, although it must be said that Apple does have the upper hand on ease of use and setup.

Support for audio content platforms isn’t great, either. To be fair, Apple has improved this since the launch of the original HomePod. It added a selection of commercial radio stations via TuneIn integration back in October 2019 and, at WWDC 2020, announced third-party streaming service support as well.

There are still some pretty major omissions, though. Ask the Homepod mini to play something from Spotify and Siri will reply that the app hasn’t added support yet. The same holds true (at the time of writing) for Tidal, BBC Sounds and Audible.

And, while it is possible to stream radio and music from Spotify to the speakers via AirPlay 2, that’s not really the point of a smart speaker like this. Let’s hope those gaps are filled in soon.

If you’re looking to buy the HomePod primarily with a view to listening to Apple Music and podcasts, however, you’re likely to be impressed. Despite its small size, the speaker punches well above its weight when it comes to sound quality, something that’s as much thanks to advances in what Apple calls “computational audio” as it is good speaker design and driver selection.

The speaker design itself is fairly straightforward. Inside is a single, downward-firing full-range driver (of Apple’s own design), mounted above an acoustic waveguide, which disperses soundwaves out and all around the room for full 360-degree audio, and this is coupled with a pair of passive radiators to strengthen bass output. These are accompanied by Apple’s S5 processor and four microphones: three that listen out for voice commands and a fourthfor noise-cancelling duties.

The HomePod mini can’t do automatic room EQ like its larger sibling, the original HomePod, but it is able to analyse the type of content that’s playing in real time and adjust its output accordingly. This results in astonishingly high-quality audio, with the mini able to deliver a strong, detailed and balanced sound, whatever you feed it. 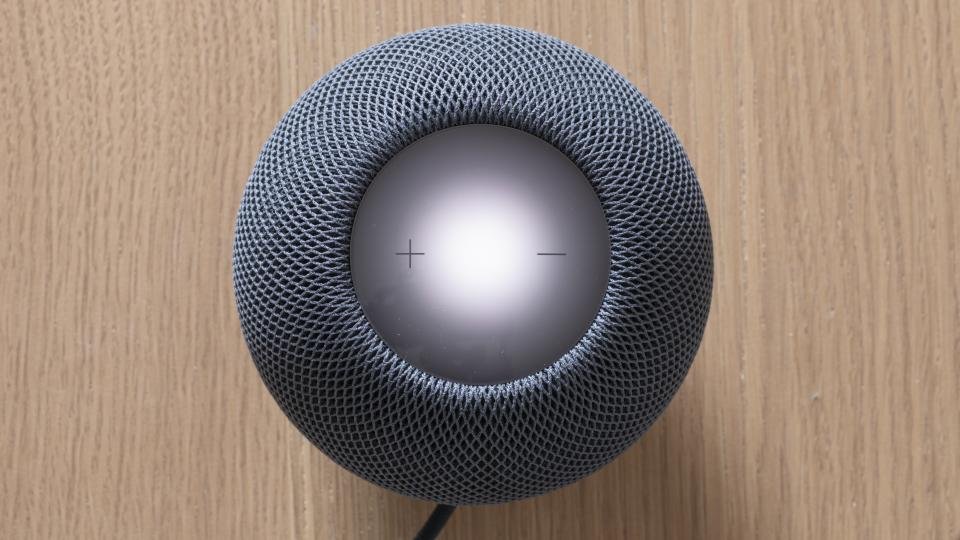 It does have its strengths and weaknesses, though. It’s particularly accomplished with vocals, for instance. From Stevie Nicks’ husky tones on the self-penned Landslide, to Chris Stapleton’s crackling country and western drawl, the HomePod mini delivered a poised, involving listen.

Simple classical tracks are served up with a delightfully light touch, too. There’s a gorgeous sense of space to Chopin’s Nocturnes and Beethoven’s Moonlight Sonata is a joy. The HomePod mini even copes reasonably well with more complex, multi-layered compositions such as Mozart’s Requiem.

There isn’t quite the authority and solidity here that the Nest Audio has, though. Heavier, more industrial music such as Rammstein’s Deutschland can take on a harsh, brittle nature, especially at louder volumes. And, obviously, don’t expect room-shaking levels of bass, either. What’s there is well-controlled but it doesn’t dig particularly deep.

Overall, though, the HomePod mini puts in a remarkably composed performance given its small size and it’s a thoroughly enjoyable thing to listen to.

The HomePod mini isn’t quite a slam dunk of a smart speaker. The current lack of Spotify and BBC sounds support via Siri is a fairly major limitation and, clearly, if you’re not an iPhone owner – or use an iPad a lot – you’re better off looking elsewhere. The Google Nest Audio is our current favourite for Android phone owners and the 4th generation Amazon Echo is also very good.

However, if Apple is your thing and can’t see yourself owning anything else other than an iPhone, the HomePod mini is a fantastic little speaker, works beautifully and should shortly (fingers crossed) open itself up to the wonders of the biggest third-party streaming services.