Apple has released iOS 14.2, and it’s a big update – both in size and features – for iPhone and iPad users. Clocking in at a hefty 1.1 GB (meaning you probably should find WiFi to download it, unless you have a particularly generous data cap and some 5G to call upon), iOS 14.2 includes more than 100 new emoji along with support for new MagSafe accessories on the latest iPhone 12 models.

The emoji cache is one of the most eagerly-anticipated parts of Apple’s release today. There’s everything from new animals – including the dodo, bison, and a seal – along with new objects like roller-skates, a magic want, a boomerang, and a step-ladder, to the transgender flag and some bottle-feeding parents. If you’ve ever wanted to send a ninja emoji, iOS 14.2 has you covered.

Apple has also included eight new wallpapers, each of which come in light and dark mode versions. It’s not the only interface change. There are now headphone audio level notifications, for example, warning of excessive volumes that could potentially damage your hearing, and new AirPlay controls for streaming around the home. 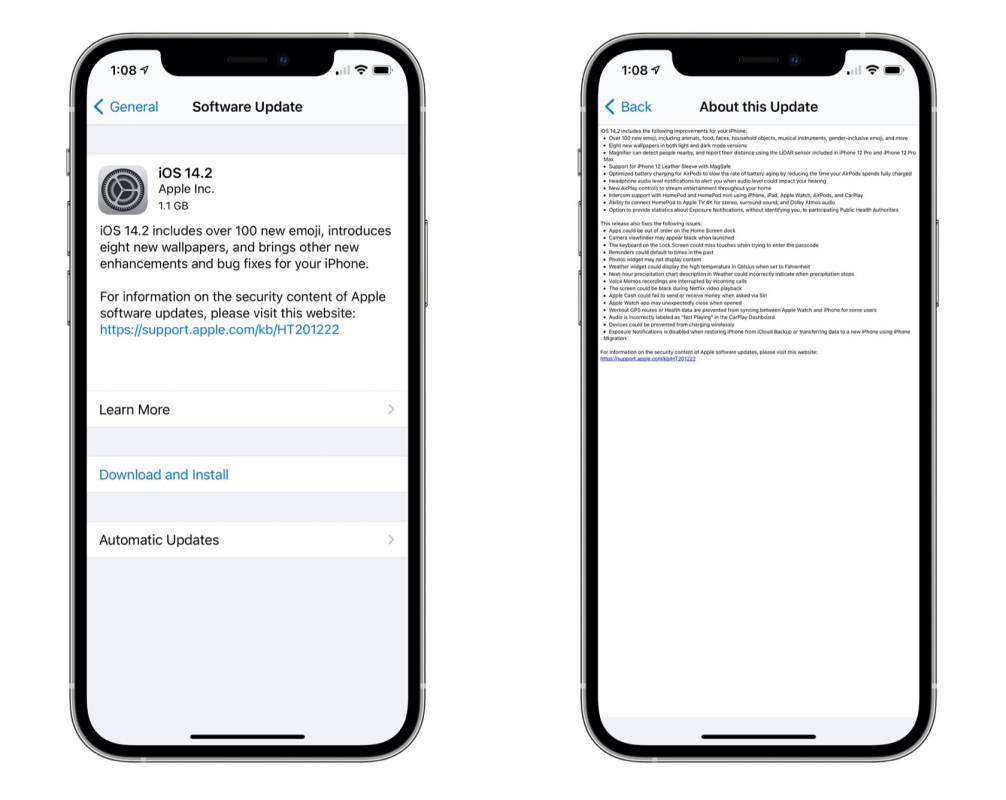 HomePod and HomePod mini intercom support has been added, whether you’re using iPhone, iPad, Apple Watch, AirPods, or CarPlay. We saw Apple demonstrate that at WWDC 2020, turning its smart speaker into an announcement tool. You can also connect HomePod to Apple TV 4K for stereo, surround sound, and Dolby Atmos audio.

The iPhone 12 Leather Sleeve with MagSafe is now supported, one of the more hotly-demanded MagSafe accessories we saw at the iPhone 12 event. Apple is also tapping the new iPhone 12 Pro and iPhone 12 Pro Max phones’ LiDAR sensor to detect people nearby, with iOS 14.2 able to figure out how far away they are.

For AirPods, there’s now optimized battery charging which, Apple says, should slow the rate that the wireless earbuds’ batteries age. iOS 14.2 also includes a number of fixes, as always, such as patching the weird “black camera viewfinder” bug some users have encountered, and missed keyboard touches on the lock screen when you’re trying to punch in your passcode. There are also fixes for black screens during Netflix playback, Apple Cash not sending or receiving money when used with Siri voice commands, and problems with GPS routes from workouts not synchronizing between GPS-enabled Apple Watch and iPhone.

The update lands just before Apple puts the new iPhone 12 mini and the iPhone 12 Pro Max up for preorder. That’ll kick off on Friday, November 6, with deliveries from the following Friday.