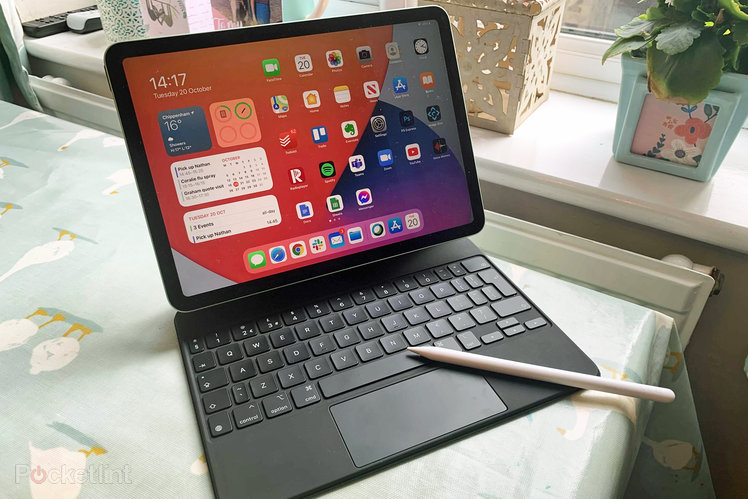 The 2020 iPad Air is a leap forward over the previous generation, which is all due to the evolution of the iPad Pro. The 2019 iPad Air – which revived the long-standing Air name for the tablet – was effectively a reworked version of the 10.5-inch old-style iPad Air.

Apple has approached the iPad Air afresh in 2020, as this time it’s based on the 11-inch iPad Pro – but with some key differences. The Air uses Touch ID instead of Face ID. There’s a 10.9-inch display instead of a slightly brighter 11-inch ProMotion display. It has a single camera rather than the iPad Pro’s dual array with LiDAR. But the Air boasts the more recent A14 Bionic chip.

As such, the 2020 iPad Air is much more like a current-generation iPad Pro than an evolution of the last-gen of iPad Air. However, is it pro enough for most people or is it better to plump for an actual iPad Pro?

The 2020 iPad Air is available in five colours, to give it extra variety. We have to say that we weren’t that enthusiastic about the green finish that’s in for review – not to start with anyway – but it is growing on us. 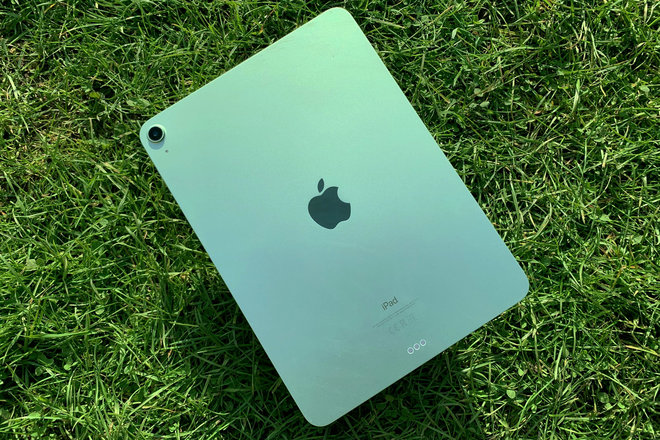 Otherwise, the design is angular and iPad Pro-like (and now a little iPhone 12-like) aside from the rounded corners. Once again, the Smart Connector is on the back for connecting peripherals, while the sides are punctuated by four speaker grilles, volume controls and the USB-C connector.

Coming from an older iPad model, the thing we noticed about the Air is how physically small it is – in part because of the smaller bezels surrounding the screen. The lack of overall size helps the weight too – the Wi-Fi version of this iPad Air is actually 10g lighter (at 480g) than the 8th Gen iPad, as found at the base of the range.

Accessories are plentiful, and if you are using the iPad Air for any kind of work you will want to get yourself an Apple Pencil (2nd generation) which attaches magnetically and charges on the side of the display. It’s really simple and does just work. 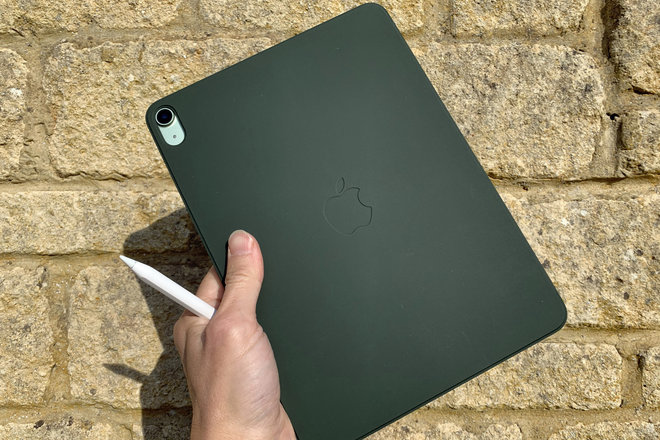 The Pencil is naturally excellent for any kind of precision work in Photoshop for iPad, for example, but it’s also really useful when you’re using the tablet without a keyboard, too – triaging emails with Pencil is especially great! It is a little annoying you can’t flick up from the bottom of the screen to get the dock or on the Home bar to go back to the Home Screen – but that’s not a new complaint.

The iPad Air is also compatible with the same Magic Keyboard that you can get for the iPad Pro 11-inch. It is expensive, but it does turn your iPad into a laptop, effectively, and because there is a trackpad, it gives you the option of mouse control should you want it. There are decent third-party options available from the likes of Brydge or Logitech to consider as well. Alternatively, there’s the thinner Keyboard Folio from Apple as well as a range of cases, of course.

The use of Touch ID instead of Face ID does bring something new to the iPad Air – because instead of it being part of a Home button below the display, it’s now part of a larger on/off button at the top side of the tablet (if you have it in portrait orientation). You just need to place your finger on it to invoke Touch ID.

This is interesting because clearly Apple didn’t want to bring Face ID this far down the lineup – retaining it as a premium feature for the iPad Pro – but it still enables the thinner bezels and larger screen as a percentage of the body. 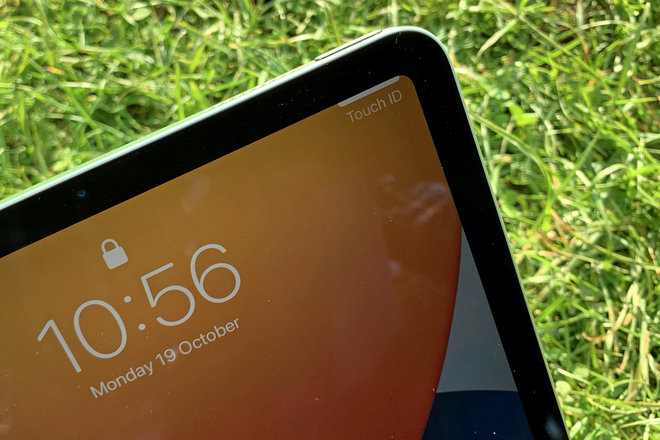 Who knows, we might see this solution on other products – such as the basic iPad and even a new version of the iPhone SE – as a way to bin the Home button but retain Touch ID.

We found Touch ID worked as excellently as we expected – we didn’t have a single fail to login – but must confess that coming from an iPhone XS Max where we use Face ID all the time, it was a slightly jarring experience. You need to train yourself to use it and when you’re switching between devices it isn’t ideal.

As for Apple Pay, the iPad Air doesn’t have NFC (near field communication), so while you can use Apple Pay on apps and the web, you can’t use it to pay in a shop (you can’t double-press the on/off button for Apple Pay like you can on an iPhone).

The iPad Air’s anti-reflective display does have True Tone and supports the P3 colour gamut, though it doesn’t have the iPad Pro’s ProMotion tech for refresh rates of up to 120hz for fluid motion when needed. On the iPad Pro this double-time refresh is supposed to help any lag from Apple Pencil, but we didn’t notice any issues on the Air.

As a 500 nit display, the Air is pretty bright, but we found the brightness tended to dim too easily – so we found ourselves turning up the brightness regularly when using it in a normally lit room. This is something that the iPad will learn, it’ll stop dimming the display quite so much over time. 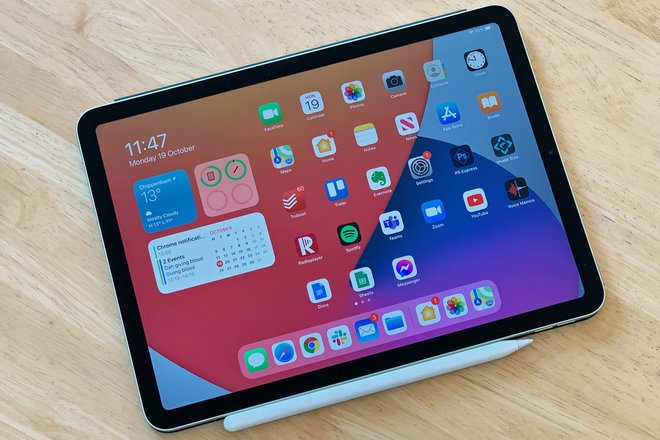 However, when you get the balance right it’s a lovely display and text especially is clear and crisp. Photos look superb.

There’s an oleophobic fingerprint-resistant coating, but it’s really hard to prevent fingerprints on a surface you touch constantly, so you will get marks – though they don’t generally interfere with viewing content.

Apple has improved the front-facing 7 megapixel Full HD FaceTime HD camera with better low-light performance and the effect in video calls is really very good – obviously 2020 has given us plenty of opportunity to try this out, even only over the few days we’ve had this iPad in our grasp. You get dual mics for clearer calls, too. 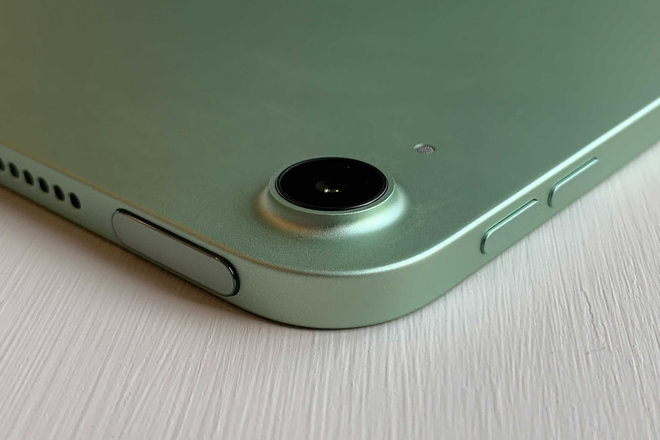 The 12-megapixel back camera is the same one as found in the iPad Pro and can record 4K video. Photos are also clear but bizarrely there’s only a flash on the front, not the back. Smart HDR (high dynamic range) is also supported on the front camera and there’s software-based image stabilisation on both cameras.

The iPad Air is based upon the new generation Apple A14 Bionic processor and as such offers excellent performance. The 5nm-based A14 is also used in the new iPhone 12 series, but isn’t yet in the iPad Pro – we’re expecting an early 2021 revision which should give us that.

A14 Bionic is a seriously powerful 6-core chip with quad-core graphics and a new neural engine for things like faster Siri, better recognition of people in photos, and handwriting recognition.

USB-C is also on board this time instead of Lightning, which enables you to hook up directly to a USB-C monitor or another display via an appropriate dongle – we connected up a monitor plus a Bluetooth mouse and keyboard to use the iPad Air at a desk and it all worked brilliantly. 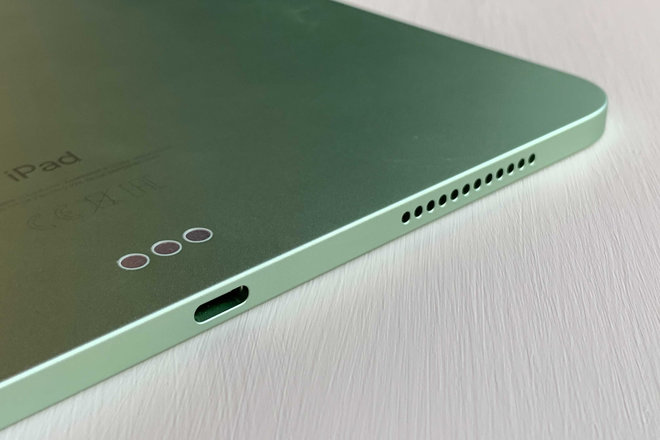 Unlike the iPhone 12 series, there’s a full charger in the box complete with 20W charging plug.

Storage-wise, the Air is available in 64GB and 256GB versions. Considering the iPad Pro goes from 128GB to 1GB, we’re surprised the iPad Air doesn’t have a 128GB version, as we think that’d be an ideal choice. Choosing the 256GB option does ramp up the price significantly. Indeed, the rise is significant to the point where you need to consider if a MacBook Air might be a more appropriate purchase if you’re going to buy a keyboard as well.

Once again there are Wi-FI and 4G cellular options (Wi-Fi 6 is supported, alongside Bluetooth 5.0). Our review model was the former but iPadOS makes it so easy to tether with your iPhone now that it really isn’t an issue when you’re out and about if you have a decent data deal on your phone. However, iPads are fully eSIM enabled if you do have a cellular version.

As with every iPad, battery life is cited around the 10-hour mark. We’re a little disappointed not to have seen this creep up in 2020, but of course the overall capabilities have improved and it’ll be interesting to see whether the next iPad Pro can offer greater longevity.

As with other new Apple products, the iPad Air uses the newly-released iPadOS 14. It features the same dynamic widgets as iOS 14, but you can’t place them anywhere on the Home Screen currently (which doesn’t really make sense to us given the screen real-estate). It also doesn’t have the App Library from iOS 14 – again a little bit of an odd exclusion.

What it does have is Scribble, a new way to input text on the iPad by just writing on the screen with your Apple Pencil. Scribble is crazily good because it can recognise some pretty shoddy handwriting – if you get a chance to try it then do because it’s a bit of a game-changer for iPad.

Writing on a tablet isn’t new, of course, and Microsoft Surface has done a better job of this over the last few years. But Scribble actually makes it possible to write whole emails or fill in forms in iPadOS. And crucially, it works well – it isn’t a feature you’ll try and then not come back to.

The iPad’s main disadvantage versus a Mac is that it remains only OK for serious multitasking. Sure you can have two things side-by-side with Split View and a third with Slide Over, but if you need to have two things side-by-side and then refer to another app, too, it can take some flicking about. The key thing is that the iPad remains a super productivity tool and is a do-anything device. 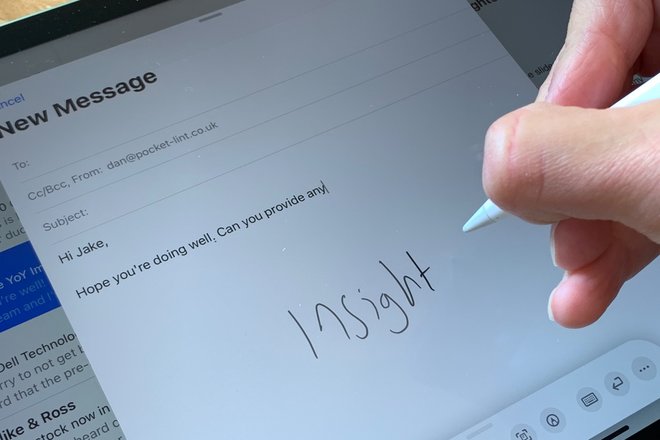 It’ll be really interesting to see how Apple Silicon Macs – which will use very similar hardware to the iPad Air and iPad Pro – will offer iPad levels of flexibility with a full desktop experience. But that’s something 2021 will bring us.