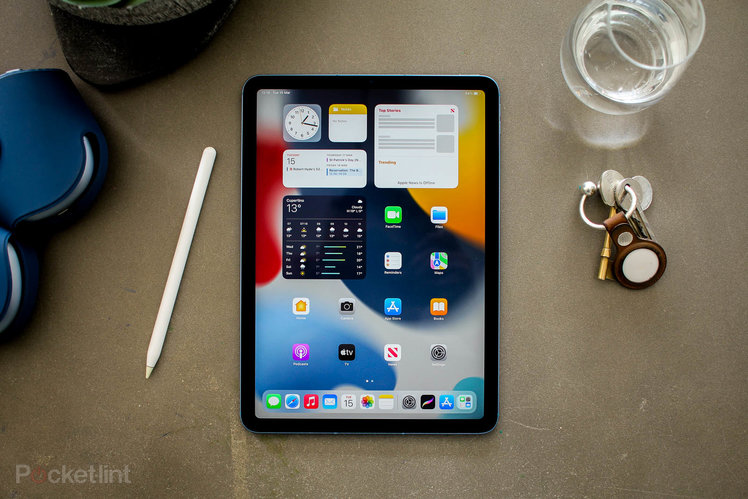 Apple has updated the iPad Air for 2022 with an upgraded processor, 5G connectivity, better front-facing camera, and a couple of new colour options. Certainly all steps in the right direction, but that’s your lot – the design is otherwise the same as the 2020 model.

So is this still the iPad to get if you’re looking for a true tablet – rather than a larger Pro model with laptop-replacement potential – or just a tick-box exercise to keep things relevant? We’ve been using the 5th Gen iPad Air to find out.

The design is the same as the previous generation, but that’s no bad thing. The Air sports the same design language as the iPad Pro, albeit smaller in scale, featuring a 10.9-inch Liquid Retina Display with a solid bezel surrounding its screen. It’s sleek and utilitarian in its approach.

Unlike the iPhone or 14-inch MacBook, Apple has yet to introduce a notch on the iPad Air’s display. That means the tablet’s bezel is thicker – although nothing like the dated-looking 9th Gen iPad – but it’s by no means a deal-breaker, as not everyone would want a notch breaking up their image anyway.

For security, the Air uses a Touch ID sensor in the power button rather than Face ID as found in the iPad Pro line-up. The Touch ID button is easy to use: it’s simply a case of quickly pressing and holding it to quickly log-in.

Encased in recycled aluminium, the 2022 iPad Air should be robust enough to withstand general wear and tear, although it’s worth noting that Apple doesn’t provide an official IP rating against water or dust resistance as it does for the iPhone. Don’t go chucking it in the bath, then. 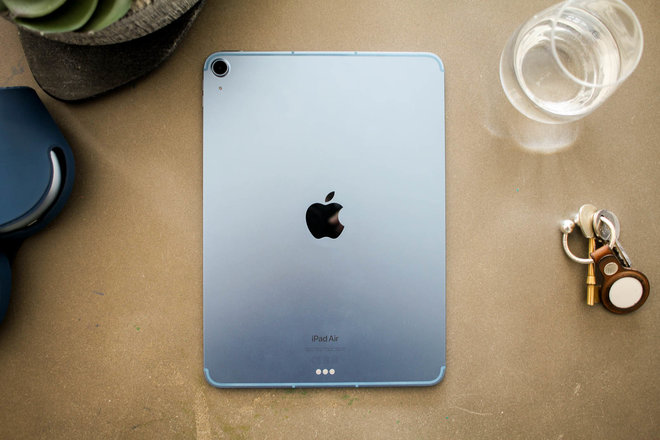 That metal case, although giving it extra protection, does mean there’s no wireless charging here. That’s a shame, as it’s a feature we love the iPhone, and one that we would still love to see for iPad. Instead it’s USB-C charging only (not Lightning port).

There are two new colours for 2022: Purple (which replaces the Green of before) and Blue. If you could call the blue truly new, it’s just different to the Sky Blue of the 4th Gen Air and very similar to the Pacific Blue rolled out for the iPhone 12 Pro. There’s even a new array of coloured keyboards and cases to match. 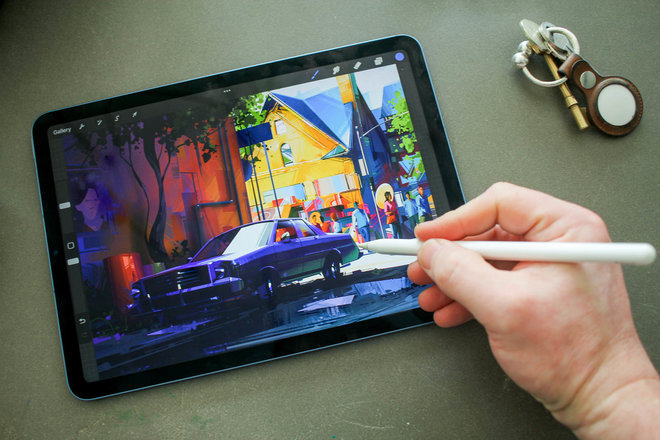 As with the previous model, the 2022 iPad Air supports Apple’s 2nd Gen Pencil. The optional stylus costs £119/$129/€135 and is charged via a magnetic charging spot on the side of the tablet. Those who do more typing than drawing can opt for Apple’s Magic Keyboard (£279/$299/€339) thanks to the smart connector on the back.

While the design hasn’t changed, there are big changes to performance. The introduction of Apple’s M1 chip puts this slate on par with the 2021 iPad Pro and even the MacBook Air in terms of power available. 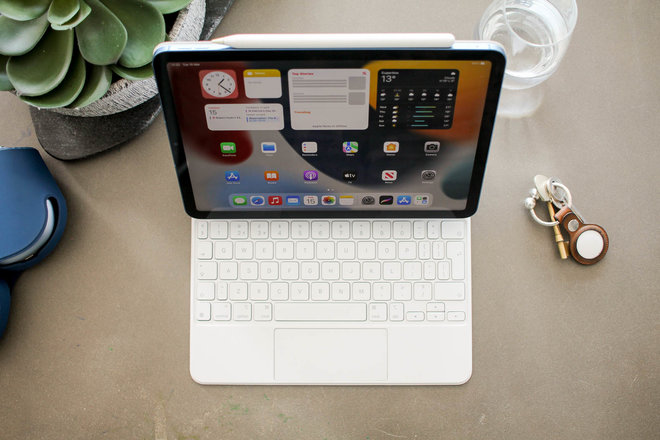 Just as we’ve found with the iPad Pro since its launch, apps load and run incredibly smoothly, so the Air can handle just about anything that current app developers or you are likely to throw at it. All the apps we’ve tried in our testing whiz along, as you would expect.

The previous 2020 iPad Air could never have been described as slow, though, and that was built upon the iPhone range of processors. So this year’s approach to bring it more in line with the iPad Pro range could be seen as overkill for what, up until now, has been considered very much a consumer, rather than pro, device.

Still, that performance boost will be welcomed by gamers, but even more likely appeal to those who are editing video and photos or using drawing apps like Procreate. 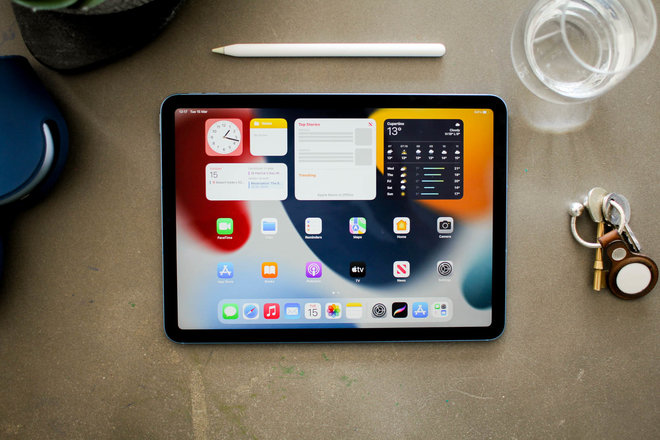 There’s little impact on the battery life in an overly concerning way too. Well, if you’re not using 5G anyway, which is one of the other new additions this year. Switch on the speedier connectivity option and you’ll soon see the battery life deplete.

Thankfully the battery capacity here is bigger than an iPhone, but it’s still noticeable just how much power 5G needs, especially if you are constantly connected. The system will try its best to only ensure it’s using 5G when it can, but it’s something to bear in mind – even if you are able to enjoy 5G coverage all of the time.

As for the display: it’s lovely. Perfect for watching movies, games, or whatever creative endeavour you’re working on. The screen comes with Apple’s True Tone technology, as well as delivering a wide colour gamut (it’s P3 for those interested). 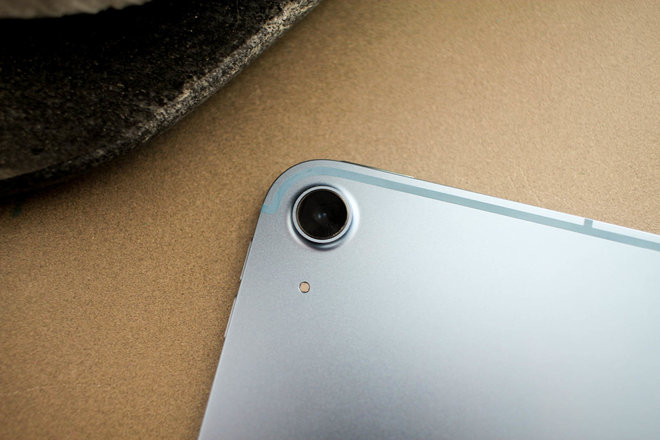 As for the cameras? The rear camera hasn’t changed over the 12-megapixel 2020 model, but the front-facing camera has. The iPad Air now uses a 12-megapixel ultra-wide here, rather than 7-megapixel and given it a wide 122-degree field of view. That doesn’t sound like a huge step forward, but it’s much better for video calls – be it via FaceTime, Zoom, Teams or something else – and now also offers Center Stage.

Whether you like Center Stage is another matter. Apple’s camera tech effectively allows you to stay in the centre of the frame, with the software automatically following you as you move, but it can be jarring at times. It’s something we’re still not completely sold on, but we are slowly getting used to it, especially now it’s being run on many Apple devices.

The 2022 iPad Air runs iPadOS 15.4, bringing several useful features and changes. That includes Universal Control, allowing you to connect it to a Mac and share content quickly and freely between the two devices.

There’s not a huge number of new features specific to the iPad, but the base iPadOS 15 was released in September 2021 and brought better multitasking, widgets, App Library, changes to Notes, improvements to FaceTime, as well as a Focus feature to allow you to focus on what you are doing at any given time.