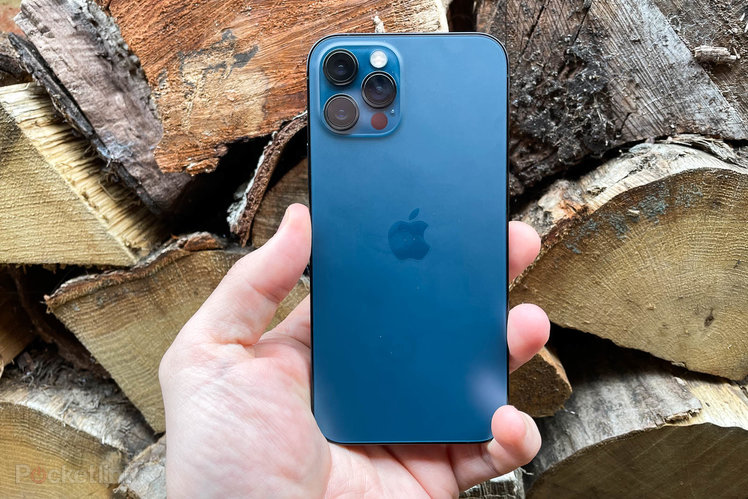 The Apple iPhone 12 Pro is here complete with a new design, a tougher screen, new processor, and even 5G. So, is this a huge leap forward, or seemingly like everything else at the moment, an update for update’s sake?

We’ve been using the new iPhone 12 Pro, one of four new iPhones announced, to find out whether this is the iPhone to get.

Wait long enough and things normally come full circle. Remember that favourite item of clothing that was in fashion, then went out of fashion, then came back into fashion? Well, the same could be said for the iPhone 12 Pro design. Gone are the rounded edges we’ve become accustomed to since the launch of the iPhone X and in is a blunter, squarer, design, with an iPhone 4 feel to it.

That translates into an iPhone 12 Pro that looks heavier than it is, even though it’s actually lighter and more robust than the iPhone 11 Pro that it replaces. There’s a hint of retro solidity to it, thanks to those square edges, while the new form factor allows for a reduction in bezel thickness around the edge of the display.

Don’t get too excited, they are still there, and we certainly aren’t talking about reaching a level where you can’t see them like Samsung and others. And yes, the notch is still present.

The end result is a larger display in a device that hasn’t grown as much as you might expect, so it’s only a fraction larger than the iPhone 11 Pro that came before it. It was something we were concerned about, but now in our hand, all you notice is that the screen is that bit bigger – it’s gone from 5.8-inches to 6.1-inches – which is going to be a lot more useable day-to-day.

But unlike the iPhone 4 and 5 models from 2013 and 2014, those edges are now highly polished. The Pacific Blue we’ve been using catches the sunlight nicely and isn’t too gaudy – we’re not sure we could say the same about the Gold model. 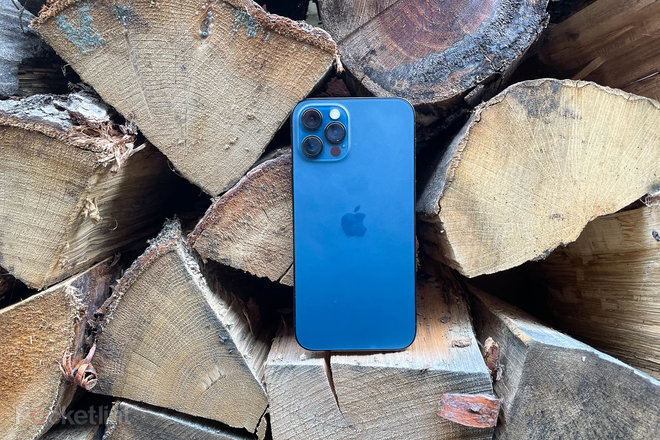 On the back, it’s one piece of frosted glass as previously seen on the iPhone 11 Pro to hide fingerprints which rises slightly to house the three cameras, LiDAR scanner, and flash in the top left-hand corner. What’s perhaps also surprising is that those squared edges are still comfortable to hold. The iPhone 12 Pro manages to strike that balance between size and thickness to mean it stays manageable without being uncomfortable.

When is glass not glass? When it’s made up of nano-ceramic crystals. That’s what the display of the iPhone is now using rather than toughened glass to protect it from scratches. For the most part, you won’t be able to tell the difference day-to-day, although we have noticed that it’s more prone to fingerprint smudging than previous models. 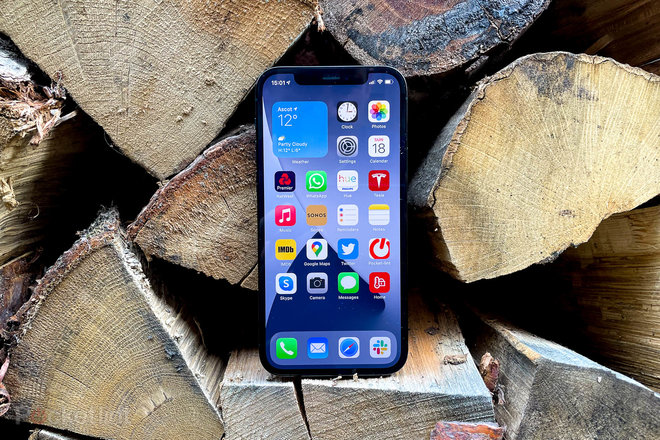 Behind that new Ceramic Shield – as Apple calls it – is that new larger display. It’s seen a slight increase in size to 6.1-inches, but as we mentioned, this fits nicely into a handset that’s only a couple of mm taller, but no wider and is indeed thinner.

The display itself remains close to the performance we saw on the iPhone 11 Pro – it’s still OLED and the overall pixel density is basically the same, but there are a few more pixels packed in. What’s important is that you have the same clarity, the same great colour reproduction and the same brightness that will punch through reflections so you can still see as well as bright sunshine as you can in low light.

A new processor and battery life

The big upgrade on the tech specs is 5G and the new A14 Bionic processor to power it all. As with every new iPhone, the device is more powerful than the one before and that allows Apple to offer more things beyond just allowing you to load apps and games faster.

And of course, most of it will be invisible. The iPhone just works when you ask it to do something. Whether that’s getting you to your latest puzzle to solve in a game, or processing Dolby Vision ready HDR 4K footage in-camera as you go. And all at the same time not draining your battery really quickly. 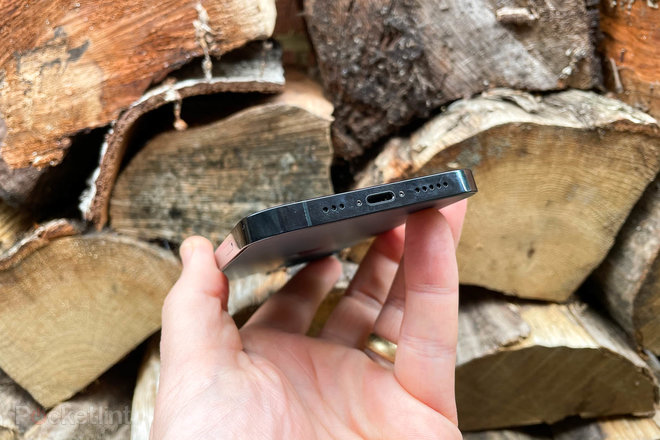 On the battery front, the iPhone performs as we would expect. It’s always hard to gauge battery life, especially as the new-normal means we really aren’t travelling as much as we once were. We’ve yet to really see how 5G usage affects performance long term, but a morning using 5G didn’t cause any major concerns. We will update this review over time as we use the iPhone 12 Pro more and in various use cases – especially on 5G – but so far we’ve not seen any indicators that this phone will struggle to make it through the day on a charge.

Apple has still opted to keep the Lightning socket on the bottom of the phone, but it now comes with a Lightning to USB-C (not USB-A) cable in the box. That’s handy if you’ve got a MacBook or iPad Pro (as you can use the wall charger), but if you haven’t, you’ll need to either use your old cable and charger or buy a new wall charger. Why? Because there isn’t one in the box. It will support 20W charging though. 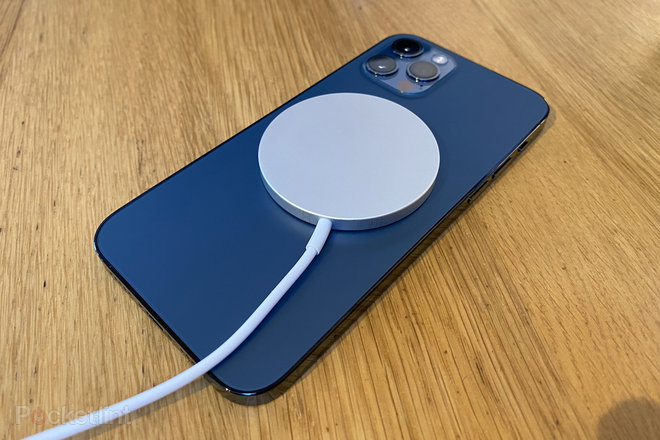 If that doesn’t sound exciting, then that’s because Apple wants to you charge via MagSafe, a new magnetic charging pad that snaps to the back of the phone to charge it wirelessly. For those who already own an Apple Watch it’s the same approach and not only delivers a faster charge than a standard Qi charging pad (15W vs 7W) but also because of the magnets, locks into place so you don’t come down the next morning with no charge. We’ve also found it means you can still easily use the iPhone while charging wirelessly, because the pad is stuck to the back.

The system works just as you would expect, but you will need to ensure you buy a MagSafe enabled case if you want to use the feature and stay protected. A standard case still works with a wireless charger, but not with the MagSafe charger.

Finally, 5G comes to the iPhone and it’s on all of the iPhone 12 models. As default to conserve battery life, 5G isn’t actually on all the time. Instead, Apple has opted for Auto 5G , which turns off 5G when the screen is off, for example, or perhaps when you aren’t doing something that is data demanding. There is a setting to override this, if you find it’s sitting on 4G when you want 5G instead.

But although the iPhone is now ready for 5G, 5G may not be ready for you. We had to drive 35 minutes to test the 5G capabilities of this phone. That will change, of course, and for those users who are in a 5G area, the benefits are certainly noticeable. You just have to be in coverage.

We were able to get download speeds of up to 260Mbps consistently. That’s a 2hr HD movie downloaded (Back to the Future if you’re wondering) in 5 minutes or Call of Duty Mobile (2.4GB) downloaded from the App Store and ready to play in under 2 minutes. Wow.

Of course, coverage will improve over time. The networks will get better, we’ll be happy to venture out again, and when you do find yourself at a stadium, you’ll be pleased that you can use your phone as if there was nobody around because of the power of the 5G network. But today, on day one, probably not so much.

Photography has always been a key focus for Apple and the iPhone 12 Pro range continues that focus with the cameras getting more tech this year. Whereas in previous years some tech would work with some of the cameras, Apple is finally in a position to offer most of image enhancement features to all cameras on the phone.

That means you get night mode and HDR on all rear-facing cameras, with night mode coming to the front-facing camera too. That brings greater diversity to the offering and means that the package is much more complete than previous iPhone models.

The camera system is comprised of three 12-megapixel cameras on the rear, covering off that main camera, with a telephoto and ultra-wide too. It’s essentially the same make-up as the previous Pro model, with that additional telephoto lens bringing 2x optical zoom over and above what the regular iPhone 12 can offer. That also enabled 10x digital zoom for those who want to get a little closer, but be warned that the quality drops off once you start using digital zoom.

As you can see from the test shots below, the results are really impressive with bright vibrant colours, crisp edges, and for the first time, portrait mode seemingly not randomly blurring things that it shouldn’t. The shot with the dark brown cows is on a sunny day into the sun under the shade of a big oak tree, and yet the HDR feature of the iPhone manages not only delivery balanced colours, but also still pick up the warm breath coming from the cow in the centre.

All that impressiveness might be because of the new LiDAR scanner on the rear that not only helps the cameras understand edges and the like or because there’s more processing power afforded to understanding your photos. The inclusion of the LiDAR scanner also means the iPhone 12 Pro can now focus quicker in low-light and offer you night mode portraits too. Something previously not possible.

The bokeh effect from portrait mode can still be a little severe, but to us the results look better than they do from the iPhone 12.

And for videographers, you get Dolby Vision recording in-camera if that’s your thing, again from all four cameras. The results are incredibly smooth, the stabilisation equally impressive and really sets the iPhone up for many professional videographers to get the maximum quality from the phone.