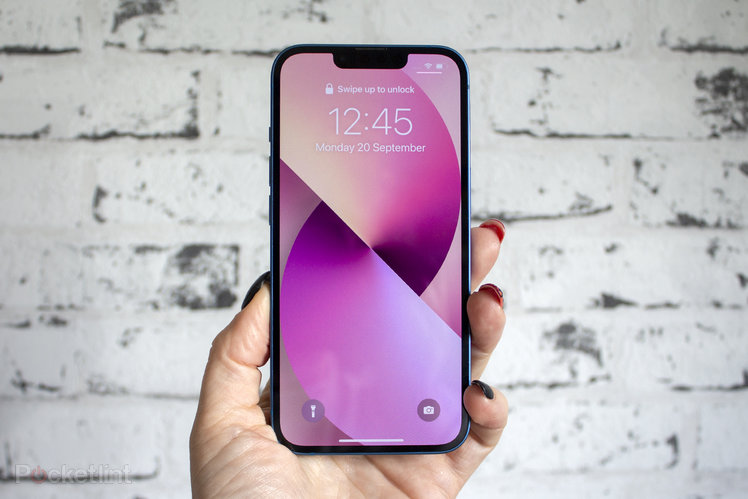 So is this ‘standard’ iPhone the best suited for most people? Well, the gap between the iPhone 13 and the iPhone 13 Pro is smaller for 2021 than in previous iterations. Although it lacks the faster refresh-rate screen of the Pro, the iPhone 13 otherwise still brings many of the features you’d want and, more importantly, actually use.

Is the iPhone 13 still worth buying six months on?

The Apple iPhone 13 came out in September 2021 but it is still an excellent handset and still a great option, despite no longer being mere weeks old as it was when we initially wrote this review. It’s faced with some more competiton, like the Samsung Galaxy S22 series, but the iPhone 13 continues to hold its own and it continues to deliver in every aspect.

Its camera capabilities are great and while it doesn’t offer a telephoto lens like the iPhone 13 Pro model and the Samsung Galaxy S22 models, it’s been something we’ve been happy to live without. The iPhone 13’s build quality remains strong and its battery life still far exceeds the iPhone 13 mini, making it the better choice between the two latest standard models. The only hestiation we would have in buying the iPhone 13 now is that its successor is due in September 2022, which might mean you’re better to wait if you can.

The Apple iPhone 13 shares a very similar design to the iPhone 12, though the eagle-eyed will notice a couple of slight changes that differentiate the two. The flat edge design remains – and it’s still lovely – like a flashback back to the iPhone 5 from 2012 (remember that?), while aluminium is retained as the material of choice for the frame (the antenna bars that sit within it are made from upcycled plastic), with a matte finish. It’s not as premium as the Pro models, but it’s still a lovely finish.

On the rear you’ll find a glass finish, shown here in a very regal-looking blue. It’s also here that you’ll find one of the defining differences between the 2021 and the 2020 models: the camera housing in the top left corner is larger and the camera lenses – which are also larger – are positioned diagonally rather than vertically. The glass also appears to be more smudge-resistant compared to our older iPhone 12 mini.

The second design shift on the iPhone 13 is on its front: the notch at the top of the display has been reduced in size over its predecessor. It’s not a huge reduction, but a reduction of around 20 per cent nonetheless, so we’ll take that. In a world of punch-holes and under-display cameras, though, many will wonder why Apple isn’t pushing the envelope in this department. 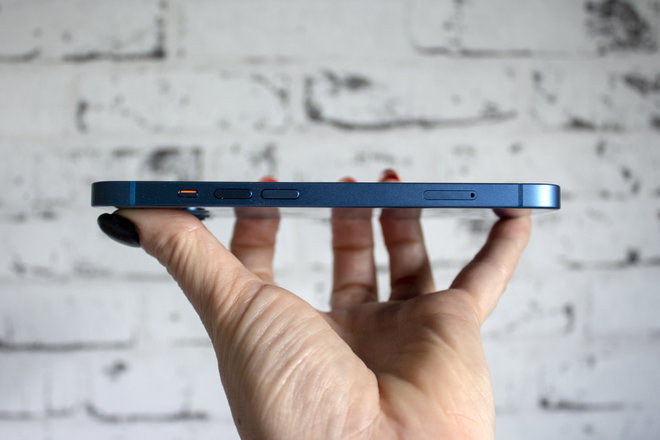 On the whole, the iPhone 13 isn’t drastically different to the iPhone 12. It’s almost identical in size – we’re talking a mere 0.15mm thicker – but it’s worth noting, however, that old cases won’t fit due to that new camera arrangement. So something else to add to the shopping list. While the iPhone 13 isn’t as compact and lightweight as the iPhone 13 mini, it’s still light and comfortable to hold, whilst offering the benefits of a larger screen and battery capacity. 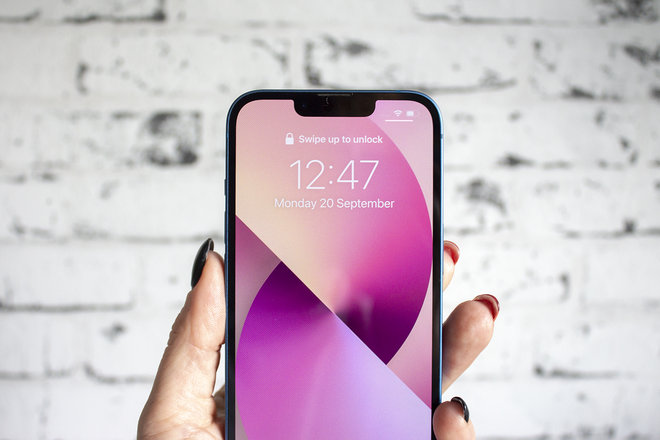 That means you’ll get smoother scrolling on the iPhone 13 Pro model, but unless you have the two models side-by-side, it’s not something you’re likely to miss out on. That said, with much of the Android competition, such as the Samsung Galaxy S22, offering 120Hz refresh as a norm, it surely can’t be long before Apple has this technology across its full range.

The iPhone 13’s resolution is the same as the iPhone 13 Pro (and the same as the older iPhone 12 and Pro models too), so you get the same sharpness and detail. The newer device does see a boost in brightness potential over its predecessor though (from 1000nits to 1200nits for HDR) – again, perhaps something you wouldn’t notice unless you were directly comparing the two models side-by-side, though extra brightness is always welcomed to help counter outdoor brightness on sunny days, for example. 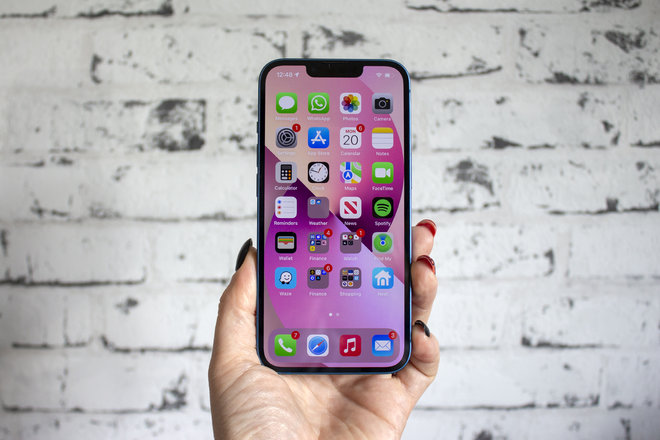 Overall, the iPhone 13 has a beautiful display, with punchy and vibrant colours, deep blacks, crisp whites and great viewing angles. It also has all the technologies Apple users have now come to expect by default, including True Tone (automated colour adjustment to ambient light), HDR support (for high dynamic range content), and Haptic Touch (long-press control with vibration feedback) – we’ve got deep-dive features linked if you want to know the full ins and outs of those technologies.

The Apple iPhone 13 features a dual rear camera, comprised of a 12-megapixel wide and 12-megapixel ultra wide-angle. It’s the same camera as you’ll find on the iPhone 13 mini but it’s an upgrade from the iPhone 12, with larger pixels on the main sensor, allowing for better processing potential and higher quality results. 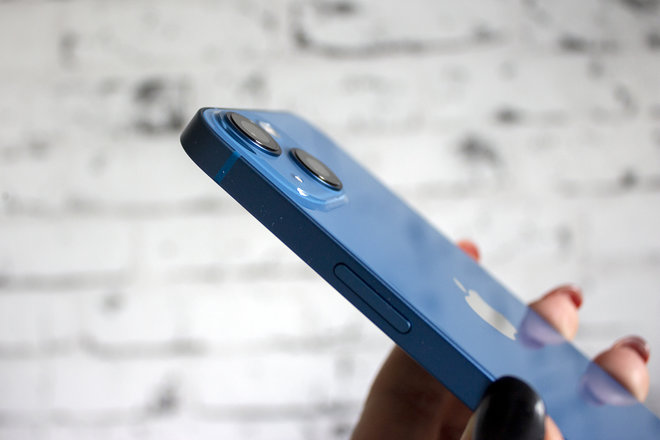 There’s sensor-shift image stabilisation on board for the main camera – as was first introduced on the iPhone 12 Pro Max – and the iPhone 13 also offers features called Photographic Styles and Cinematic video (which we’ll get into in a moment).

Extra features aside, the iPhone 13 delivers great results – and this goes for the rear and front camera setups. Images are full of detail, with good colour accuracy and definition. In low-light conditions, we did find there was some lag after pressing the shutter button before Night Mode kicked in, but the results are still good.

However, there’s no Night Mode Portrait on the iPhone 13, as you get with the iPhone 13 Pro, and you of course miss out on that third lens, which is a telephoto for optical zoom. You also miss out on the macro mode, and ProRes when that arrives (Apple’s incoming high-quality 4K video capture format).

The iPhone 13 still has the Cinematic video mode though, which enables you to select where you want the focus to be and that object, person or pet will be tracked throughout capture. You can change the focus during the video or you can change it after the fact. It’s a fun feature and one that is well worthy of a try – but good lighting is necessary for it to work properly. 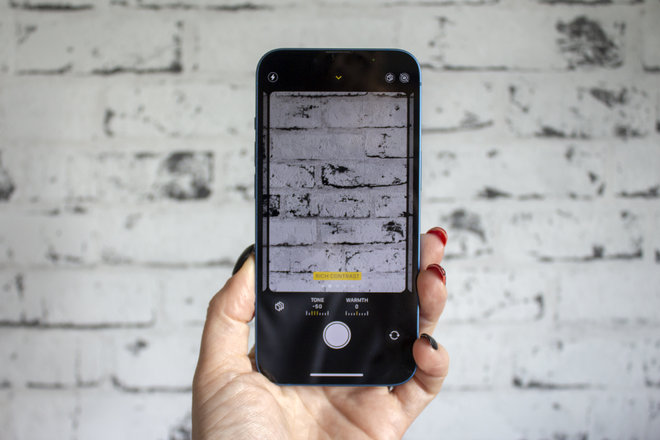 The Photographic Styles feature is another one that runs across the whole of the iPhone 13 series, applying a subtle filter to the image. Although be warned: you can only apply the filter ahead of taking a picture and once taken you can’t remove it. Thankfully the results are subtle, so you’re not going to end up with a ruinous bleach bypass effect or anything like that. There are four presets – Vibrant, Rich Contrast, Warm, Cool – that can be accessed with a swipe up from the bottom in the camera app that you can opt to use before you press the shutter button.

The Apple iPhone 13 runs on the A15 Bionic chipset with Neural Engine and it delivers a great performance. Everything loads quickly, the device switches between tasks without any issues, while games and apps run smoothly. The iPhone 13 Pro is slightly more powerful, despite also using the A15, as it has an additional GPU core (five versus four) for its setup. 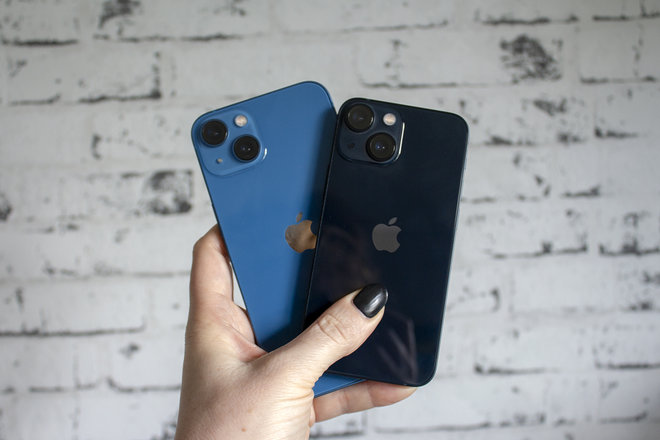 In terms of battery life, the iPhone 13 is claimed to offer up to 19 hours – and that’s not far off the mark in our experience. It offers a more impressive life than the iPhone 13 mini, as you would expect given its larger capacity, and the physically larger battery capacity means it’s certainly an advance over the previous iPhone 12.

Of course, it does depend on what you do with the phone, and how much of a power user you are. But we were left with around 30 to 40 per cent by bedtime on days where we had been testing the various camera features and watching movies and shows, whilst also using the video features and 5G.

The Apple iPhone 13 runs on iOS 15, which is available for all iPhone devices (from the iPhone 6S and later). There are a few extra features on the iPhone 13 that you won’t find on older models, however, like the Cinematic video mode and the Photographic Styles in the camera app, but otherwise the experience is a familiar one.

There are some great features on iOS 15 worth checking out, like Portrait Mode on FaceTime and the Focus modes – both of which we love – while Live Text and the Shared with You features are certainly useful. There are also some elements that take a little time to get used to, like the new Safari design. 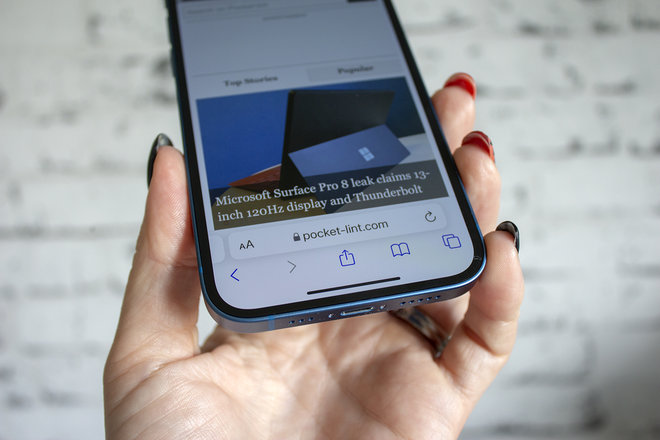 You can read about all the changes that the software build brings in our separate feature, but the one thing we would say is that we’re pleasantly surprised by how much we like the slimmer and more timely delivered notifications on the lock screen, plus how quickly we’ve got used to the Safari browser’s URL bar moving. Give it a chance – sometimes change is good.