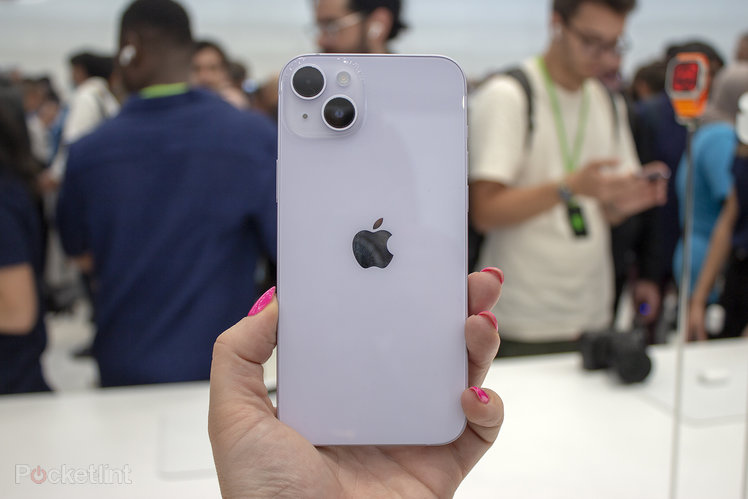 The small and pocketable device has been replaced with a larger form factor, meaning the standard iPhone models now match the iPhone Pro models in terms of their size offerings.

So what’s the plus-size standard iPhone like? Well it’s definitely big – and not as cute as the iPhone mini – but it certainly has its advantages. Here are our first impressions. 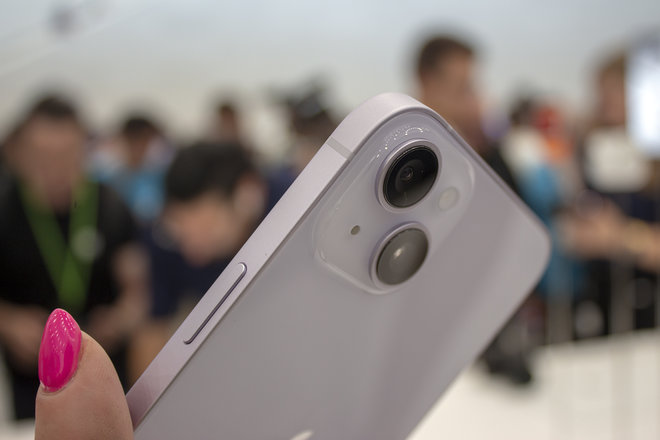 On the left edge, there’s the silence toggle and volume buttons, along with the SIM tray for all markets except the US where there is no SIM tray and a frosted section instead thanks to the move to eSIM only. The right edge meanwhile, sees the power button. At the bottom, speakers are positioned either side of the Lightning charging port, while there’s also a speaker at the top of the display above the notch. 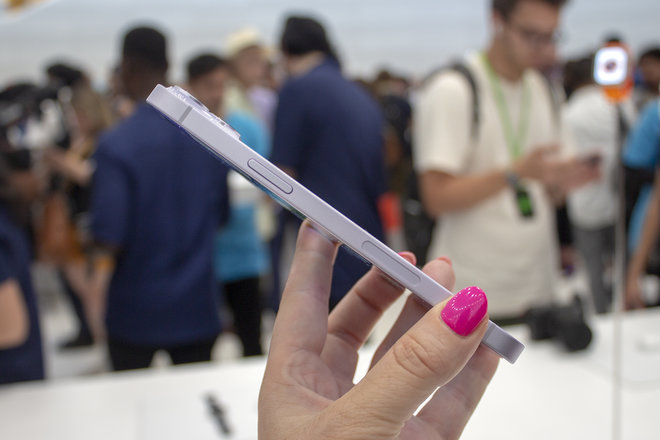 Unlike the iPhone 14 Pro Max, the iPhone 14 Plus retains the notch we have seen since the iPhone X, though it is slightly smaller now than in 2017. That therefore means that while the larger form factor is new here, the design is familiar to the iPhone 13.

On the rear, you’ll find a glass panel with a glossy finish – like the iPhone 13 – while in the top left corner, there’s the prominent square camera housing. This housing has seamless edges that flow into the rest of the rear and there are two lenses, positioned diagonally, again like the iPhone 13. 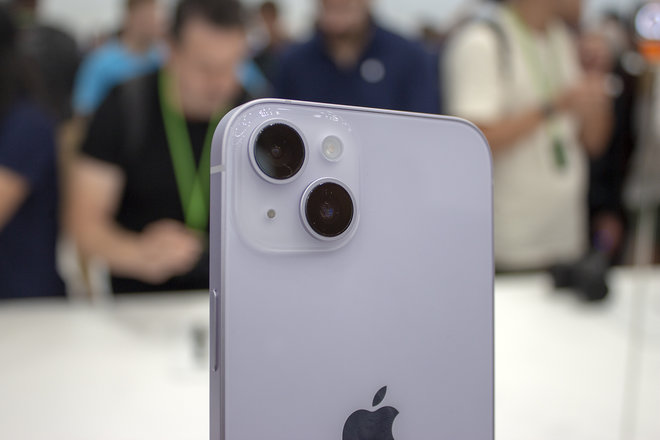 The iPhone 14 Plus comes in five colour options, comprising Blue, Purple, Midnight, Starlight and Product Red. The Product Red is bright and bold, while the Purple is very light, though probably our favourite. We were a fan of the Blue too though and Starlight and Midnight are good for those who want a more understated device.

The Apple iPhone 14 Plus has a 6.7-inch display and that’s really the story for this device as it’s the same size you’ll find on the iPhone 14 Pro Max, but you aren’t paying Pro prices here. It makes the larger display iPhone more accessible for those that don’t want all the bells and whistles offered by the Pro model.

The resolution for the iPhone 14 Plus is 2778 x 1284 pixels, which results in a very similar pixel density to the iPhone 14 at 458ppi. It’s an OLED panel so those blacks are very black, while colours are rich and vibrant with plenty of pop. There’s plenty of brightness too with a peak brightness of 1200nits. 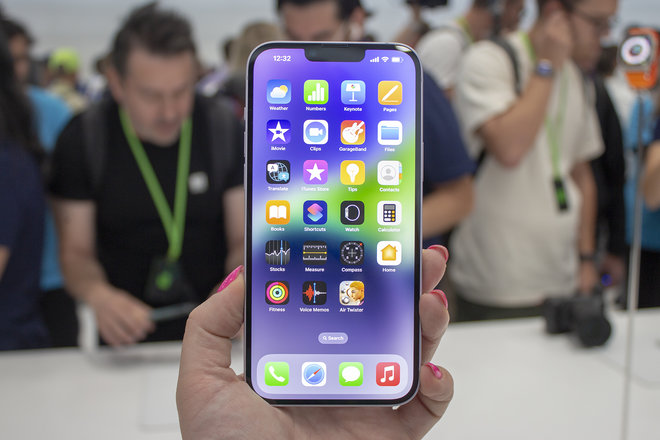 The usual Apple display features are on board here too like True Tone, Haptic Touch and support for HDR, though the iPhone 14 Plus doesn’t bring the company’s ProMotion technology. It supports a standard refresh rates of 60Hz rather than offering the 1Hz to 120Hz refresh rate offered by the iPhone 14 Pro.

Sadly, the iPhone 14 Plus also doesn’t have an Always On Display like its Pro sibling. That means that while you can still take advantage of the new Lock Screen customisation options offered by iOS 16 – more on that in a minute – certain information won’t remain on the screen when it is off.

It’s not necessarily a bad thing as the iPhone 13 performs very well, but it does mean the iPhone 14 Pro Max is the more powerful big device rather than being on par with the iPhone 14 Plus. We need more time to test the iPhone 14 Plus before we can make judgement on its performance, but we suspect it will still be more than capable even if not as speedy as its Pro sibling. 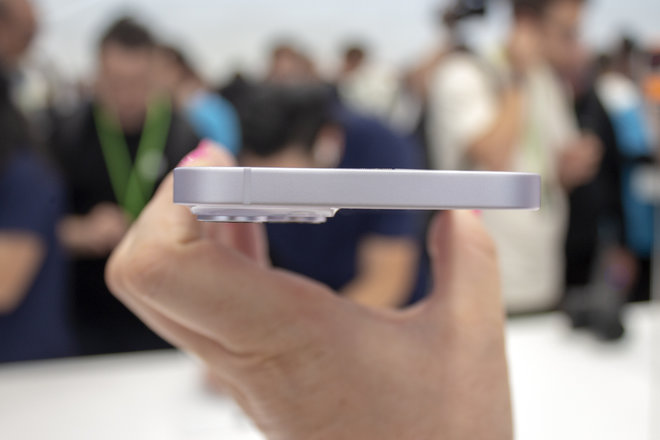 There’s 5G connectivity, like all iPhones have offered since the iPhone 12 models launched in 2020. The iPhone 14 Plus also offers satellite connectivity too though – with the ability to send a text to emergency services using satellite if you are somewhere without signal. This function is only available in the US and Canada, however, and you only get coverage for 2 years.

Storage options for the iPhone 14 Max start at 128GB and hit 512GB, and as with all iPhones, there is no microSD support for storage expansion. As we said above, on US models there’s no SIM tray, so you’ll have to use eSIM only. That’s likely not a problem for domestic US carriers, but you won’t have the option of buying a cheap nano SIM if you travel and those who want switch phones regularly might find it more fiddly. Phones outside the US will still offer nano SIM, however. 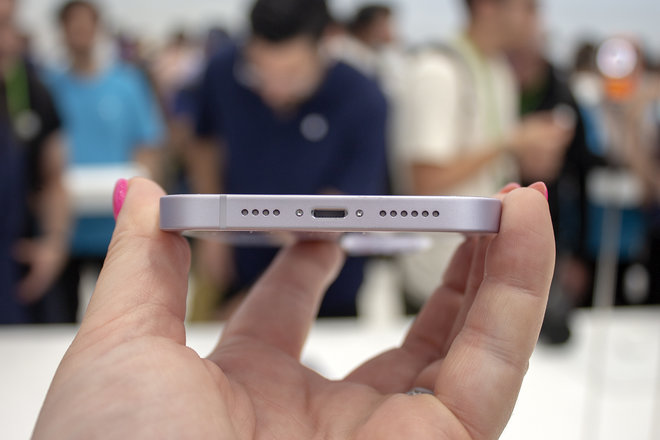 We couldn’t test the battery life or performance of the iPhone 14 Plus during our short amount of time with it but we will be sure to do this during our full review.

The Apple iPhone 14 Plus’ camera capabilities are the same as the iPhone 14 and therefore a slight step down from the iPhone 14 Pro. There’s a dual lens system on the back, comprised of a main camera and an ultrawide camera so you miss out on the telephoto offered by the iPhone 14 Pro Max. It also doesn’t get the upgrade to a higher resolution sensor. 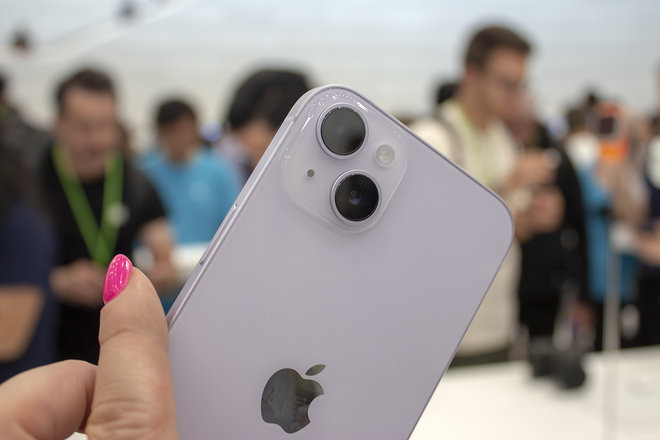 The main camera on the iPhone 14 Plus sees an upgrade compared to what was offered on the iPhone 13 though, opting for the same as the iPhone 13 Pro instead. That means you’ll find a 12-megapixel sensor with an f/1.5 aperture over f/1.6 aperture, along with a 12-megapixel ultrawide sensor with f/1.8 aperture. There’s also something called the Photonic Engine, which is present across all four iPhone 14 models, said to help with low light shots. It’s basically an image processing system.

Elsewhere, there’s sensor-shift stabilisation on board, along with plenty of features including Photographic Styles and Cinematic Video – both of which launched with the iPhone 13 models – Night mode and Portrait mode with Depth Focus. There are also a couple of new features on board, including Action Mode, 4K at 24fps and 30fps on Cinematic Video and Foreground Blur on Portrait Mode. 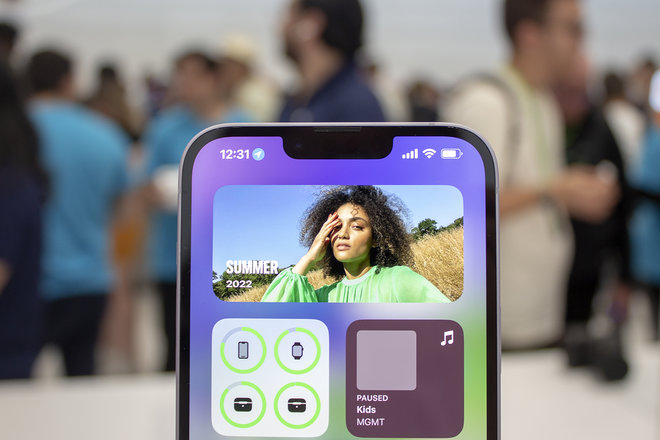 On the front, the iPhone 14 Plus has a upgraded 12-megapixel sensor. Autofocus is now on board the selfie camera, along with a wider f/1.9 aperture compared to f/2.2, which should allow for better low-light shots.

We didn’t have enough time with the iPhone 14 Plus to test out its camera capabilities so that’s something we will be sure to do when we get it in for review, but we would expect solid performance.

It might be missing the telephoto lens and the main lens may not be as high a resolution as the iPhone 14 Pro Max offers, but Apple has always been very good at processing so we would anticipate decent results from this model too.

The Apple iPhone 14 Max runs on iOS 16, which brings with it a slew of new features, most notably the changes to the Lock Screen. You can read all about iOS 16 in our separate feature, but the Lock Screen changes mean more customisation. 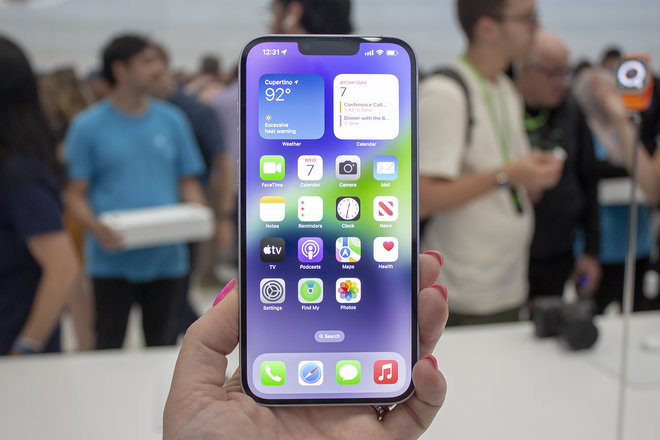 There are also changes to Messages, Mail and Photos, as well as further enhancements of features like Focus.