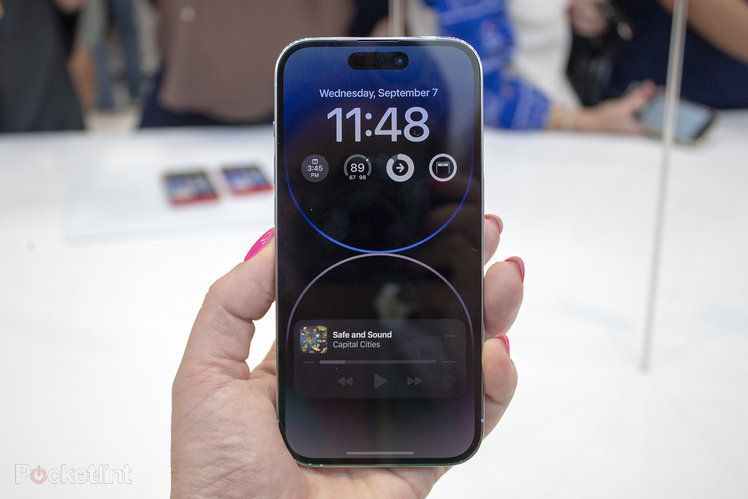 It also differs quite a lot from its standard sibling – the iPhone 14 – more so than in previous years. The main reason to buy the Pro models in the past was the camera, but it’s so much more than that this year.

The Apple iPhone 14 Pro design is familiar, but there are some key differences this year to set it apart from its predecessors. One of those differences is the front of the device.

In 2021, we saw the notch at the top of the display reduce slightly compared to how it had been since the launch of the iPhone X in 2017. For 2022 though, that notch is no more.

In its place is a wide pill-shaped cutout housing the Face ID sensors and the front camera, which Apple is calling Dynamic Island. It’s clean, inoffensive and it’s a great departure from the notch, offering something a little different. More than that though, it is functional.

For an app to appear in Dynamic Island, you simply open it as normal and swipe up from the bottom. The app then slides into Dynamic Island. It works with timely notifications too though, such as if a Lyft is arriving, you’ll be notified through it. The space adapts depending on what you are being alerted to, like forming into a square for Face ID, and widening when you switch the silence toggle. 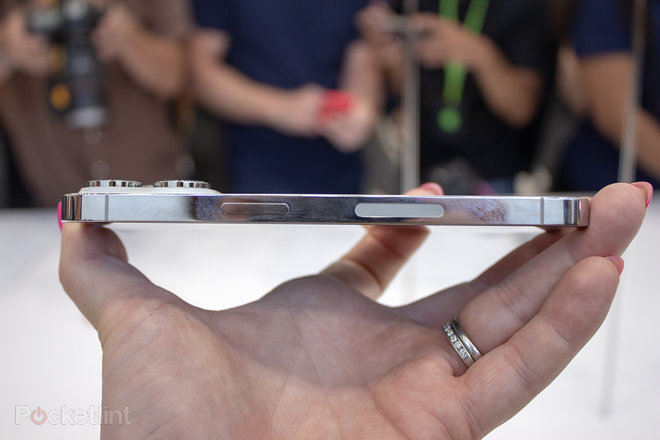 Elsewhere, the iPhone 14 Pro has the same flat edges we have seen since the design changed in the iPhone 12. It’s a surgical-grade stainless steel frame compared to the standard iPhone 14’s aluminium frame, and it is weighty, delivering a solid, premium feel.

The signature silence slider remains on the left edge, along with the volume controls, while the right edge has the power button. For those in the US, the SIM tray has been removed, with eSIM only. In its place is a frosted section on the edge. At the bottom, speakers flank the Lightning charging port. Yes that’s right, still no USB-C. 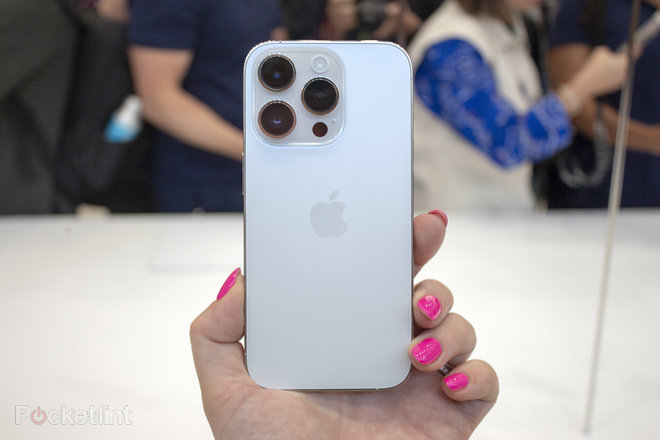 The iPhone 14 Pro is IP68 water and dust resistant like its predecessor, though there are new colour options this year, including a Deep Purple, which is hands down our favourite. You still get the Gold, Silver and Space Black options too though if you’re after something a little less out there but the purple is really striking. We loved the Space Black too though.

On the rear, the iPhone 14 Pro continues with three lens camera setup with Lidar sensor in the top left corner, compared to the two lens setup on the standard model. As with the iPhone 13 Pro, the rear is one glass panel so the camera housing’s edges seamlessly flow into the rest of the rear glass panel. There’s also a glossy finish compared to the rest of the frosted rear, differentiating the camera housing again.

Along with the design changes, the Apple iPhone 14 Pro has some great display changes too. The size remains the same as the iPhone 13 Pro so you’re looking at a 6.1-inch Super Retina XDR OLED display with the iPhone 14 Pro. The resolution is 2556 x 1179 pixels, which results in a pixel density of 460ppi.

You’ll also find many of the same technologies, including True Tone, support for HDR and Apple’s Haptic Touch. ProMotion is on board too, but improvements have been made here with an adaptable refresh rate between 1Hz and 120Hz compared to 10Hz and 120Hz as it was with the iPhone 13 Pro. This allows for the Always On Display, which is the other big story along with Dynamic Island. 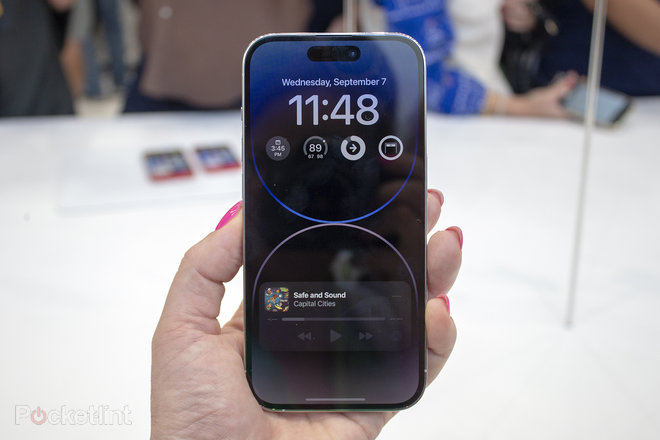 The Always On display means information remains on the screen in a coloured dimmed format without you turning it on, such as the time for example, or Activity Rings. The Always On Display reflects what Lock Screen you have chosen in iOS 16 – more on that further down – so you can customise what you want to see by adding widgets.

Now, for Android users, an Always On Display isn’t a big deal. It’s something that’s been on Android devices for years, and not just flagships, but mid-range and even budget handsets. 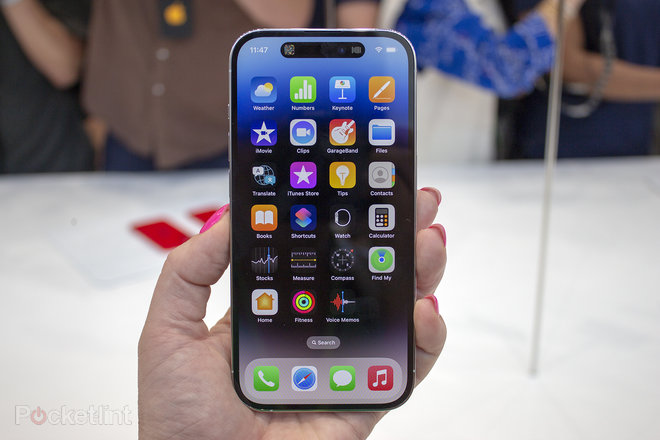 Unlike the standard Apple iPhone 14 and iPhone 14 Plus, the iPhone 14 Pro sees a processor upgrade to the A16 Bionic chip. It’s a 4nm chip with a 6-core CPU with two performance cores and four efficiency cores, and a 5-core GPU. There’s also a 16-core Neural Engine. 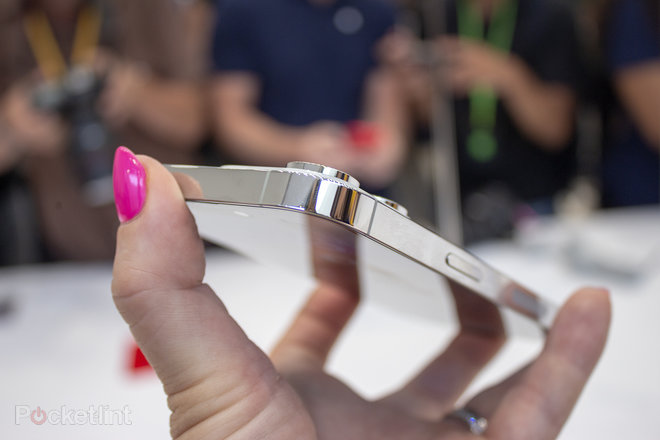 The iPhone 14 Pro – and the iPhone 14 Pro Max – come with satellite connectivity too. That essentially means the iPhone 14 Pro will allow you to contact emergency services via text when you don’t have phone signal. This is available for those in the US and Canada only for now though – and you get 2 years free.

Storage options are the same as the iPhone 13 Pro for the iPhone 14 Pro – and iPhone 14 Pro Max – starting at 128GB, with 256GB, 512GB and 1TB options. As has been the case since the iPhone launched, there is no microSD support for storage expansion.

For those in the US, there’s also no SIM tray either, as the iPhone moves to support eSIM only. That means you won’t need a nano SIM any more – but if you’re someone who travels regularly and wants to buy a local SIM at your destination, or if you move phones regularly, this could be a real pain. iPhone models in regions outside the US will continue to offer a nano SIM tray. 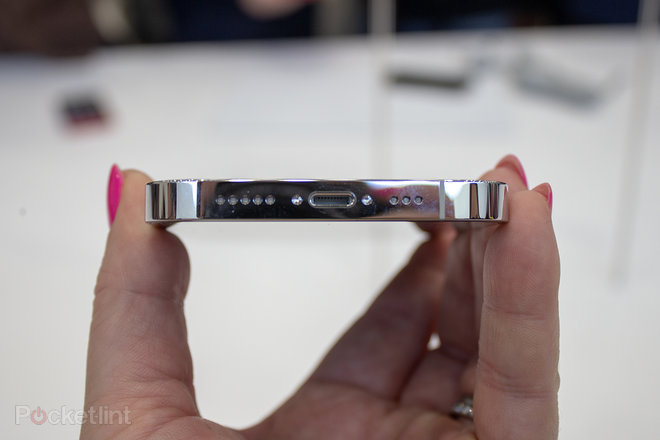 The iPhone 14 Pro has also been treated to a battery upgrade too, promising up to 23 hours video playback compared to up to 22 hours from the iPhone 13 Pro. We of course didn’t get a chance to test this during our brief amount of time with it but we will put it through its paces in our review though so watch this space.

The iPhone Pro models have always been focused on the camera capabilities and the iPhone 14 Pro is no different. There’s a triple rear camera on the back, comprised of a main camera, ultrawide camera and a telephoto camera. 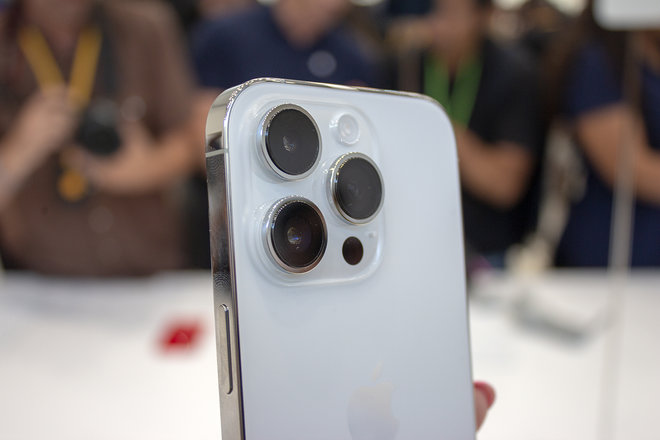 Apple has also added something called Photonic Engine, which is promising to improve low light images. It’s essentially the sort of AI we’ve seen from other manufacturers that generally boosts the quality of photos from all your cameras, even the front.

Naturally, we couldn’t test the camera capabilities of the iPhone 14 Pro during our brief time with it, but we have high expectations. Apple has always been great at the processing side of things so while a resolution boost is always good to see, it’s the processing that allows you to get a decent result by just pointing and shooting.

In terms of features, the usual suspects are on board, including Night mode, Portrait mode with Depth Control, Photographic Styles and Cinematic Mode. There’s also ProRes on the iPhone 14 Pro – like the iPhone 13 Pro – along with a couple of new features including Action Mode and a Foreground Blur for Portrait mode. 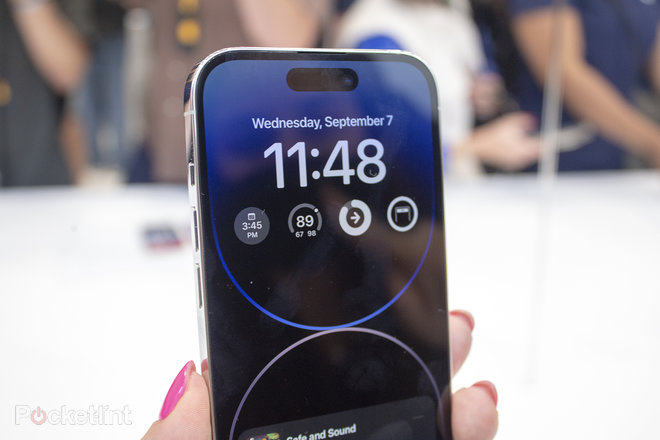 The front camera on the iPhone 14 Pro is a 12-megapixel sensor, but there’s a wider aperture, which should make for better low light shots, and there’s autofocus too now. In a nutshell, that should mean better selfies all around but we will test this in our full review.

The Apple iPhone 14 Pro runs on iOS 16 – which offers a range of new features, including most notably the Lock Screen that we briefly mentioned above.

We have a separate feature on iOS 16 and all the changes it brings, as well as a dedicated feature about the Lock Screen, but there are changes to Messages, Mail and Photos too. 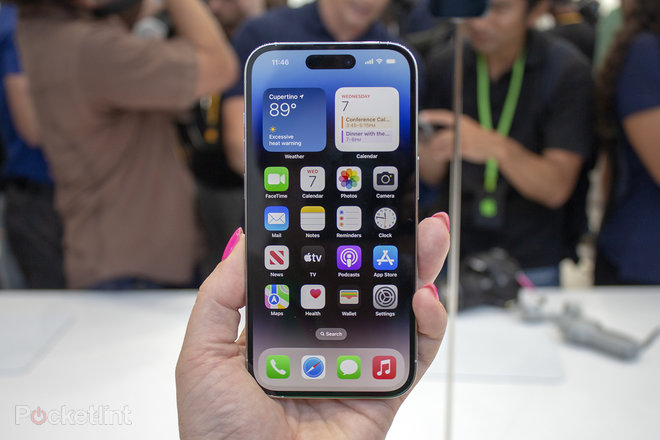