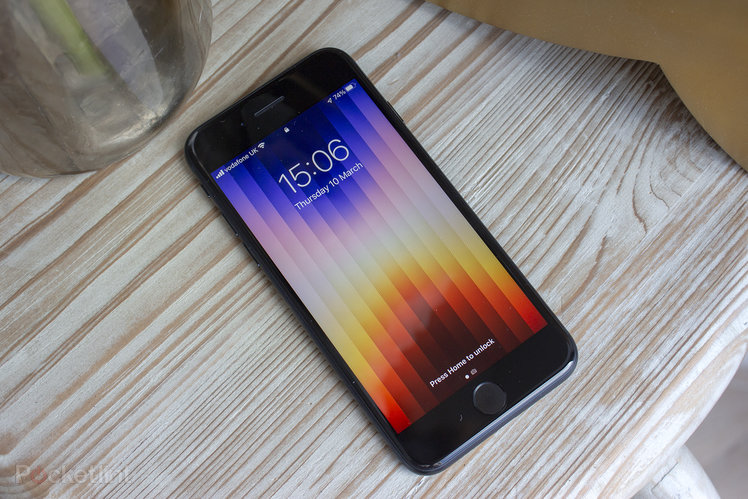 Apple introduced the third generation iPhone SE in March 2022, two years after the second generation model came out. The entry-level iPhone differentiates itself from the newer models by continuing to opt for the Touch ID home button and the design that comes with that, rather than move to Face ID and a full screen experience.

Are updated internals enough though? The iPhone SE (third generation) offers a lot of power for its price, but that power comes with a couple of compromises. Is it still worth your consideration? We moved out of the iPhone 13 mini and into the iPhone SE (2022) to give you our verdict.

The Apple iPhone SE (3rd generation) retains the same design as its predecessor, as well as the iPhone 8 from 2017, with the only difference being tougher glass – the same as the iPhone 13 mini – on the 2022 iPhone SE.

An aerospace-grade 7000 series aluminium frame is sandwiched between two glass panels, but rather than squared off edges like you’ll find on the iPhone 12 and iPhone 13 models, the iPhone SE (3rd generation) features the same rounded edges we came to know and love from the iPhone 6 to the iPhone 8.

It’s a solid design and one that has stood the test of time and will no doubt continue to for older devices. The problem, is that in 2022 as a new device, it feels dated on the iPhone SE. Don’t get us wrong, it still works and it’s lovely and light, while the rounded edges are nice to hold, but we wanted a little more from the iPhone SE (2022)’s design, even if this was just the inclusion of MagSafe. 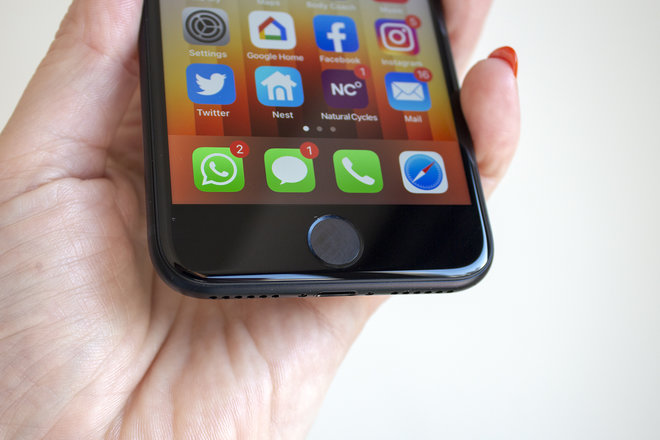 The Touch ID home button – which still works brilliantly – sits at the bottom of the display, while there is a large bezel at the top too, housing the front camera and speaker. On the rear, there is a single camera, while the volume rocker is positioned on the left edge with the silence toggle and the power button situated on the right.

For those considering the iPhone SE (2022) as an upgrade from their iPhone 6, 7 or 8, it is familiar and that’s not always a bad thing. It’s also IP67 water and dust resistant, which the iPhone 6 models aren’t, so that’s a bonus if upgrading from those. But if you wanted new and fresh, the iPhone SE might be new, but it isn’t fresh in terms of design, it’s just tougher.

The Apple iPhone SE (3rd generation) has a 4.7-inch Retina HD display, which is the same offered on the iPhone SE (2nd generation). It’s a great display, and despite being LCD rather than OLED like the iPhone 13 models, it is punchy with vibrant colours and deep blacks. 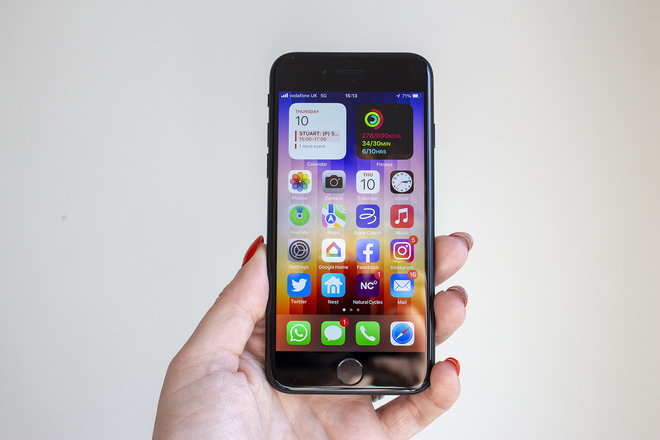 The 1334 x 750 pixel resolution delivers crisp detail too, so really there isn’t a great deal to complain about. It offers decent brightness (max 625 nits), even in bright conditions and it’s responsive too, despite not playing the numbers game and offering a refresh rate of 90Hz or faster like many competitors offer at the same price point.

For those moving from an iPhone 6, 7 or 8, the screen will be familiar, like the design overall. There’s True Tone technology on the iPhone SE, along with Haptic Touch, both of which are useful features. True Tone adjusts the white balance on the screen, while Haptic Touch enables quick access to features by pressing a little harder. For those on older iPhone models, Haptic Touch replaces 3D Touch. 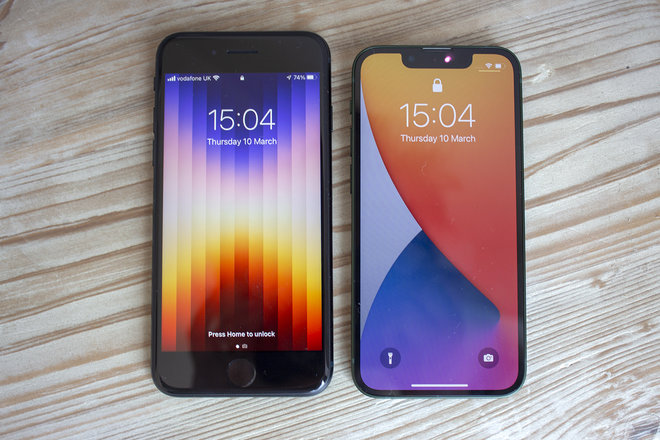 The only thing we would say about the iPhone SE (2022)’s otherwise great display is that the iPhone 12 mini and iPhone 13 mini both offer a larger, brighter and punchier display in a smaller footprint so they are worth considering if your budget allows for them.

You get an extra 0.7-inches of screen real estate with the iPhone mini devices and there is something to be said for that – mainly that everything feels less squashed. The iPhone 13 models also have an OLED panel and they are HDR compatible. In the iPhone SE’s defence though, unless you have experienced the larger, full screen design, or you put the devices side-by-side, you won’t miss it or notice, so what the iPhone SE offers will be more than sufficient for most looking to upgrade.

Performance is where the Apple iPhone SE shines. It might not offer the newest design or the best display in the iPhone portfolio, but it does match the iPhone 13 models in terms of performance and that’s impressive for its price point. 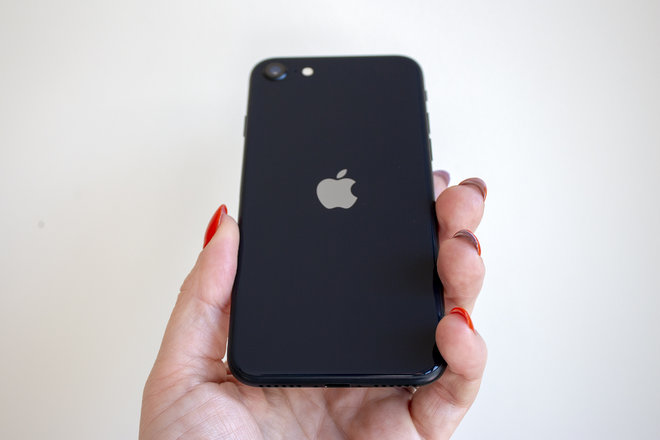 Offering the A15 Bionic chipset and Neural Engine under its hood, the iPhone SE (3rd generation) is a speedy little device and excellent in this department. We experienced zero lag during our review time, with it seamlessly switching between apps and handling games without any issues. For those upgrading from an iPhone 6, 7 or 8, or perhaps older, the smooth running of this device will no doubt be noticeable compared to older models, not just in gaming but everyday tasks too.

It allows for features like Live Text – read more about this in our separate feature – as well as on-screen dictation, but there are also benefits when it comes to photography too – more on that in a minute. The A15 Bionic hardware also means the iPhone SE (3rd generation) is also 5G capable too, marking one of the biggest attributes of this device, opening the door to faster connection speeds. 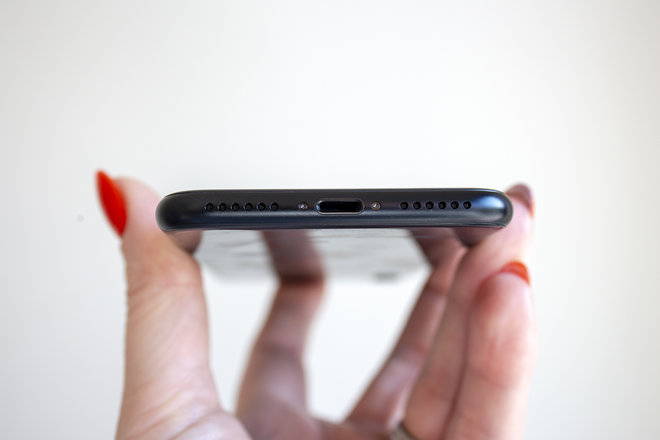 In terms of the competition, you’ll find larger screens, more up-to-date designs and more cameras on other mid range devices around the same price point, like the Samsung Galaxy A devices, for example, but while they may have 5G, they don’t run flagship core hardware like the iPhone SE. It’s just a case of deciding what compromises you are willing to take. 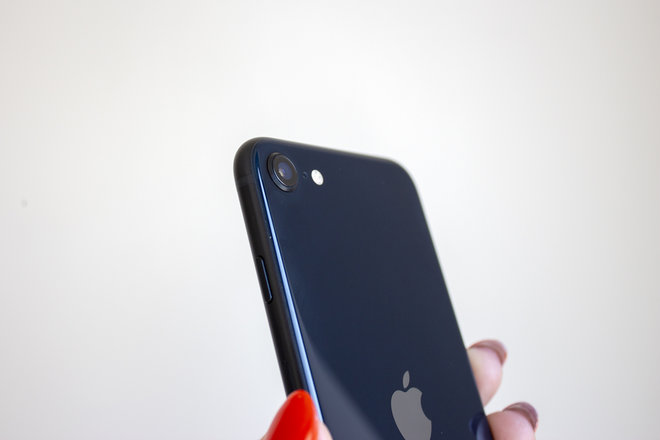 Despite offering a single 12-megapixel main camera on the rear with an f/1.8 aperture like the iPhone SE (2nd generation), the iPhone SE (3rd generation) has features like Deep Fusion, Photographic Styles and Smart HDR 4 on board.

It also offers Portrait mode with depth control, and the six Portrait Lighting options you’ll find on the iPhone 13 models, whereas the iPhone XR only offered three when it launched for example. What you don’t get however, is Night mode, which is quite a big omission for a 2022 device. There is extended dynamic range for video recording, but no Cinematic video mode like the iPhone 13 models.

Overall, the iPhone SE (3rd generation) offers very good results though. No, it doesn’t have three lenses on the rear, or even two, but Apple has always nailed the processing, allowing you to be able to point and shoot with most models and get a decent shot.

In good lighting conditions, there is plenty of detail in shots from the rear camera and good distinction with a good representation of colour and an overall balanced shot. Low light results are acceptable, though the iPhone SE (3rd generation) doesn’t match the iPhone 13 models here, requiring more light than the iPhone 13 for the same shot.

The 7-megapixel front camera is a solid performer too, offering decent selfies in good lighting conditions. Again though, the lack of Night mode means that low light selfies don’t match the results you’ll get from the iPhone 13, a clear weakness of this device.

What about battery life?

When it comes to battery life, the iPhone SE (3rd generation) offers between 13 and 15 hours in our experience, which isn’t far off what Apple promises.

Keep in mind that we were testing various elements of the device, which always puts the battery under pressure, so there is a good chance you may get longer out of the battery depending on what you use your device for. 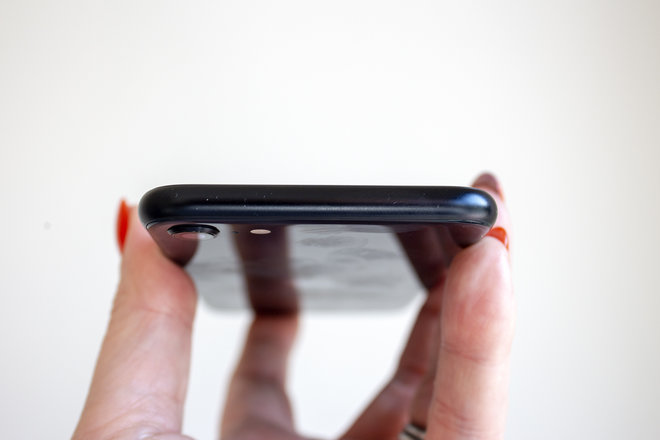 As an example of one of our test days, we took the iPhone SE (third generation) off charge just before 8AM and we were at 25 per cent by 8PM. This was several hours testing the camera in the morning though, as well as playing various games, running numerous apps, taking calls, and having multiple notifications coming through from emails, WhatsApp and social media.

For a small device, the iPhone SE (3rd generation) does a good enough job when it comes to battery life and it will likely last longer than an older iPhone too, so a solid upgrade. It also offers wireless charging – a feature that is now pretty standard on smartphones so no a huge deal – though it wasn’t on the iPhone 6 or iPhone 7 models, so a boost in this department. 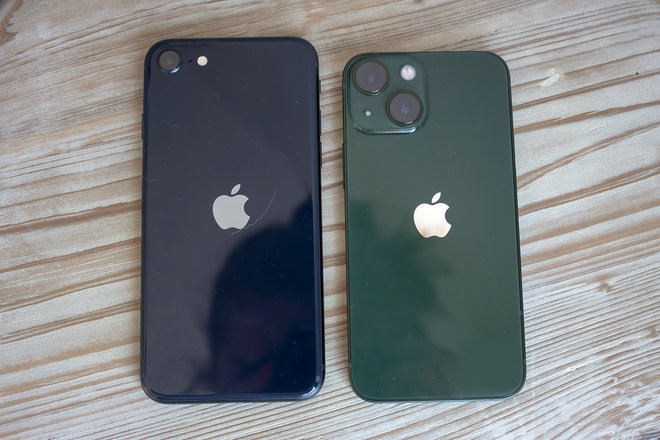 However there’s no MagSafe charging here so you don’t get quite the same experience as the iPhone 13 offers, nor the option to use any of those MagSafe accessories. The iPhone SE (2022) will support 20W charging, able to hit 50 per cent charge in 30 minutes with a compatible 20W charger, but this is sold separately.

Last but not certainly not least, software. The Apple iPhone SE (3rd generation) runs on iOS 15 software and Apple typically offers at least 5 years of software update support, which is a year longer than Samsung offers on its devices, and even longer than most other Android manufacturers. It means that you don’t only get most of the same features offered on the iPhone 13 now, but you’ll continue to get new features as they appear with the subsequent iOS updates in the coming years. 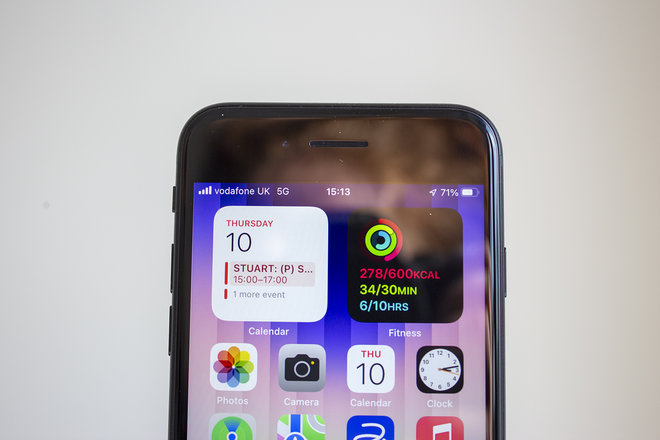 Aside from this, running the same software as the iPhone 13 and doing it on the same hardware, means you get a pretty much identical experience but for less money.

Of course, the iPhone 13 has Face ID instead of Touch ID, so there are some differences on the iPhone SE, like swiping up for Control Centre, and double tapping the Touch ID button for Apple Pay, but the overall experience is pretty much the same and this applies across all iPhones compatible with iOS 15.

You can read our iPhone tips and tricks feature to find out just how much you can get out of the iPhone SE and we also have a separate feature on iOS 15 and what features it brought with it – from Focus and iCloud+, to FaceTime updates and Safari changes – but overall, the iPhone SE’s software is easy to use, easy to navigate and intuitive. It’s familiar for those upgrading, and for those switching, it won’t take long to get to grips with.