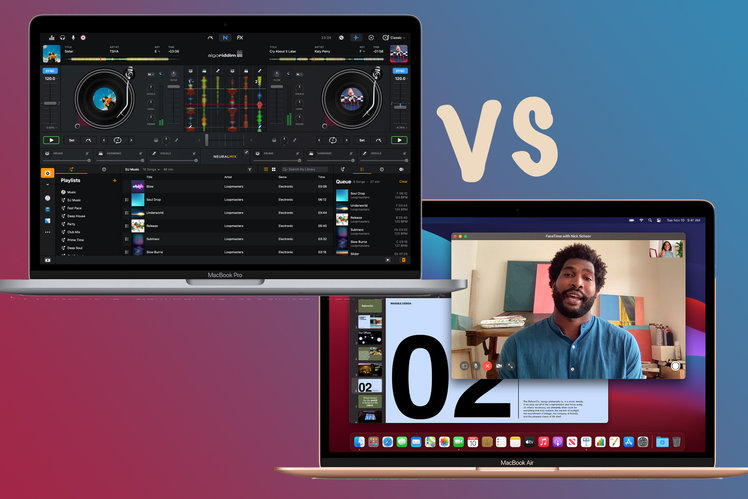 The new MacBook Pro and MacBook Air are here (alongside a new Mac mini). All three are based around Apple’s new M1 processor – part of its Apple Silicon undertaking to transition the Mac to its own Apple-designed, ARM-based processors.

So here we’re going to pit Apple’s new M1-based 13-inch laptops against each other in a straight versus fight. MacBook Air vs MacBook Pro.

It’s worth noting that Intel versions of the 13-inch MacBook Pro remain on sale, sitting above the two Apple Silicon versions (there are two 10th generation Core i5 versions, also with Core i7 options).

The MacBook Air has gone completely over to Apple Silicon – however, some Intel versions will still be available from resellers so if you’re interested in those check out our Intel version of this article, comparing the latest Intel versions of both laptops launched in early 2020.

So what’s the best Apple M1-based option for you? If you’re considering other models as well, check out our bigger MacBook guide.

Both new Macs are exactly the same in design to those they replace. The 13-inch MacBook Pro is available in silver and space grey while the Air is also available in Gold as well.

The keyboard has been completely redesigned on both models after mass criticism of Apple’s previous Butterfly design. That older keyboard design remains the subject of an ongoing recall program across all portable Macs. 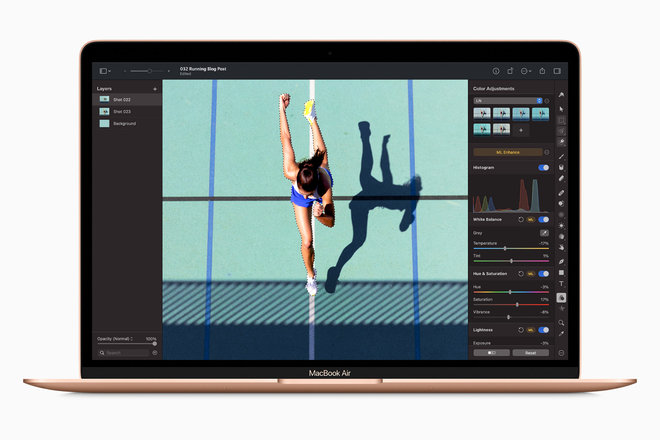 You’ll get two USB-C and Thunderbolt 3 ports on all these models although there is a change – support for the new USB 4 standard. USB 4 essentially incorporates Thunderbolt 3 for super fast data transfer between more devices and they use the same USB-C connector that we’re now used to.

All the models retain their 3.5mm headphone jacks and – still! – have 720p FaceTime HD cameras, although the M1 chip does improve the image according to Apple. That’s thanks to a new image signal processor (ISP) which reduces noise and has machine-learning enhanced face detection and auto white balance. 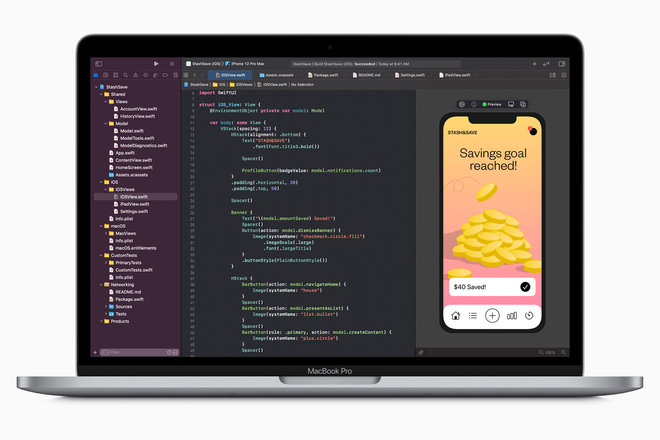 The so-called Magic Keyboard is in all of these notebooks – a vast improvement on pre-2019 models. As with their predecessors, both Macs now have Touch ID for fingerprint login and Apple Pay authentication.

The Touch Bar stays on the 13-inch MacBook Pro as a substitute for a touchscreen. It seems that Apple is sticking to its guns and not enabling touch on the Mac which we think is a bit of a miss, but Apple doesn’t necessarily want your Mac to be a do-anything device, it probably wants to sell you an iPad as well.

The same display is used in both models here. Whereas in previous generations there were very tiny differences, now they are now the same, with the only exception being that the Air’s display is capable of 400 nits of brightness while the Pro’s can reach 500 nits. The 13-inch display has a resolution of 2,560 x 1,600 pixels (227ppi), the same as older 13-inch MacBook Pros and MacBook Airs. 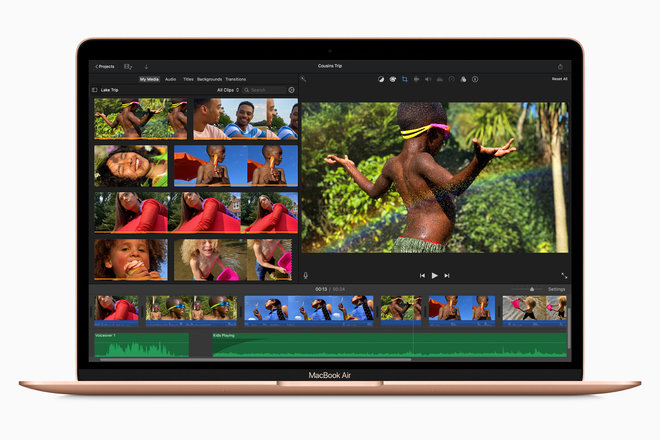 One thing that has changed is that both models support the wide P3 colour gamut; this was previously the preserve of the Pro. As before, both have True Tone.

The new M1 platform features an eight-core 5nm CPU – four high-performance cores and four high-efficiency cores. There’s also a graphics processor (see below) and the Apple Neural Engine on board for fast machine learning processing. And Apple says that the Mac now instantly wakes from sleep like an iPhone or iPad. 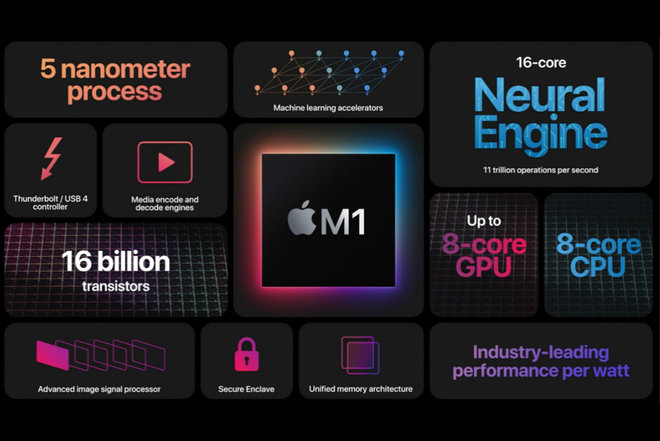 The MacBook Air has now moved completely over to Apple Silicon with two M1 versions that are very similar – with more storage and a slightly better GPU being offered for $250/£250 more.

However, the MacBook Pro range isn’t quite that simple.

There are four different base versions of 13-inch MacBook Pro available which can be further customised. The bottom two MacBook Pros have the Apple M1 processor. These replace models models (originally introduced in 2019) with 8th generation Intel Core chips.

The two Intel models that are still available have 10th generation chips and sit above the two M1 models. Coincidentally, the 10th gen Core i5 quad-core chips are 2.0Ghz variants. You can also configure up to 10th generation Core i7 at 2.3GHz with maximum Turbo Boost speeds of 4.1Ghz. 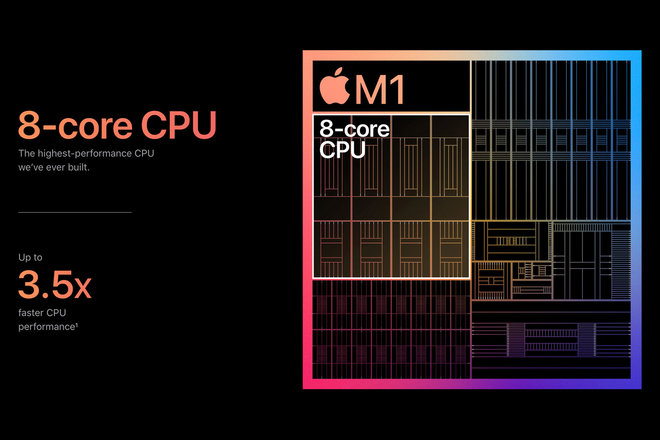 Unfortunately, there’s no discrete graphics option on any of these Macs – unlike the 16-inch Pro. All the graphics power comes from the M1 chip. The GPU is an eight core unit….except if you buy the base level MacBook Air in which case it has 7 cores. Yes, this small difference between the models does baffle to begin with. The answer lies in chip binning – a method where defective parts can still be sold as a lower specification version.

And so yes, those M1 GPUs that have flaws in a single core will still find themselves in an Air, with that faulty core disabled. Strange but true.

Battery life is the big winner of the M1-powered laptops. As we see with other ARM-based computing devices, power efficiency is at the heart of things and the Air low boasts around 15 hours of web browsing – an improvement of four hours versus the Intel model and up to 18 hours of TV watching (a six hour improvement).

The Pro has an even more impressive improvement with around two hours extra on top of the Air. That means 17 hours of web browsing vs 10 hours on the old equivalent Pro and 20 hours TV watching – again vs 10 hours.

The 13-inch MacBook Pro can have up to 32GB of memory but 8GB of 2133MHz LPDDR3 memory is standard and 16GB of 3733MHz LPDDR4X on the higher-end models. The storage tops out at 4TB but starts with a minimum of 256GB. Adding more internal storage at the time of purchase ups the cost significantly.

One limitation of the M1 is that it can only support 16GB and, while that’s not a step back for the standard specifications of any of these models, the Intel-based MacBook Pros 13-inch models can be upgraded at support up to 32GB.

All these models have support for the latest Wi-Fi 6 and Bluetooth 5.0 standards.

M1 Macs will come pre-loaded with the latest Mac operating system – macOS 11 Big Sur. Siri is once again fully supported hands-free. Big Sur has a fresh new design and is designed to take advantage of the extra power that M1 offers. It’ll still be familiar, but has clearly been designed with iOS and iPadOS in mind.

But the jury is out on app compatibility – after all, new processors mean that apps need to be made compatible and this will form a key tenet of our reviews when we test out these Macs. iOS and iPad apps will also now be coming to the Mac, but not all of them will be available as developers can opt out of offering them on the Mac if, for example, they want users to visit their site through a browser when on a traditional desktop machine. 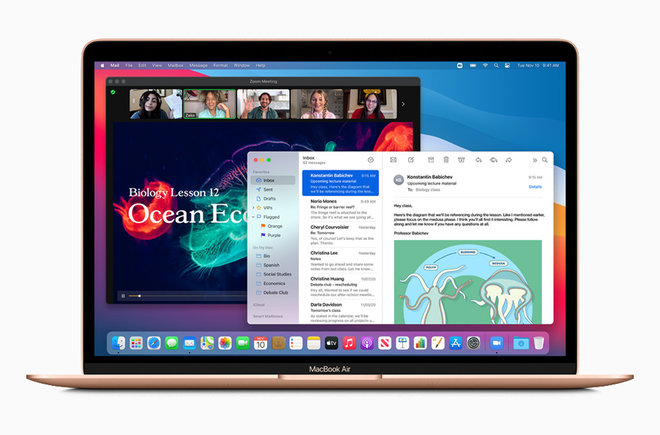 However, it’s support for traditional desktop apps that is most unknown at present. Apple’s own Mac software is now Universal and runs natively for M1 systems, but how long will it be before that’s the case for other apps from the likes of Adobe, Microsoft, Affinity, Avid and so many more.

Apps that aren’t ready will be run through a translator – called Rosetta 2. Apple says this should be seamless, but we don’t know this for sure yet; the proof is in the pudding.

The 13-inch Intel MacBook Pro starts at $1,299/£1,299 for the two-entry level Apple M1-based versions (same as the outgoing 8th generation Intel Core models it replaces). This rises to $1,799/£1,799 for the 10th generation Core i5 versions that sit above the M1. The MacBook Air starts at $999/£999. As usual, you can fine-tune the processor, memory and storage, though as always the larger SSD storage options get rather expensive.

The new M1 Macs are at the cutting edge of processor tech. If it’s an Air you want, there is every reason to choose a newer model over an Intel one.

In terms of the MacBook Pro you need a good reason to plump for an Intel model over the new M1 designs. But some will need access to niche apps that won’t be compatible with Apple Silicon anytime soon or maybe you need the power a higher-end 10th generation Core i5 or i7 will give you. However, you are buying an outmoded machine by doing so and it’s only a matter of time before these are phased out as well – probably within a year.

That’s not to say they will become useless by that date of course – expect macOS to support Intel systems for at least the next couple of versions, maybe even more.

In terms of the ultimate question of whether you should buy an Air or a Pro – we’d choose the Air. Currently there is little reason to choose the 13-inch Pro over the Air unless you really want the Touch Bar, better audio tech and that extra bit of brightness – but it’s also bigger and heavier, too.