Rumors about the new MacBook Pro models are starting to show up every more often. The latest information comes from the Eurasian Economic Commission filings, where French site Consomac has spotted a couple of devices that could be the new M1X MacBook Pro models.

It seems that the new M1X MacBook Pro models could be getting closer, as two new Macs with model numbers, A2442, and A2485, were spotted running on macOS 12 Monterey. Indeed, several Mac model numbers are listed on these filings, but most of them consist of updates that could arrive in the upcoming months. However, the A2442 and A2485 models don’t match any of the existing models.

This makes us believe that Apple is getting ready to announce the new 14-inch M1X MacBook Pro and the 16-inch refresh, which are expected to launch before 2021 is over. These new laptops are also rumroed to feature a more powerful 1080p FaceTime camera. We could see the return of an HDMI port and a microSD card reader, as well as a new MagSafe charging connector. 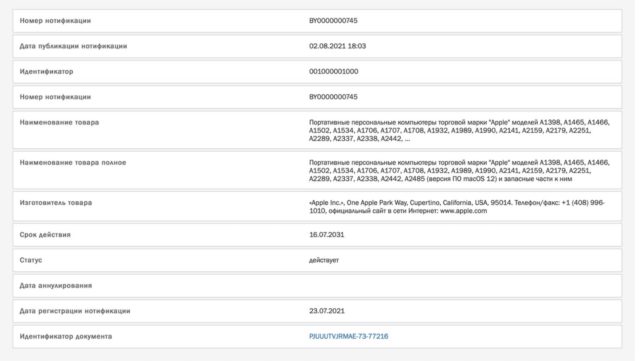 Other changes suggest that the Touch Bar will be no more, as it would be replaced in favor of physical function keys, and we could also get to see the arrival of new mini-LED screens on both the 14 and the 16-inch M1X MacBook Pro.

We have also received some information from Bloomberg’s Mark Gurman, suggesting that Cupertino may complete its transition from Intel processors to Apple Silicon before November 2022. He also suggests that we could also get a new Mac mini then the same M1X processor that’s expected to come in the upcoming MacBook Pro models.

Rumors also mention that we will soon get to see a new Mac Pro with an Intel processor, a redesigned MacBook Air, and even a smaller Mac Pro with Apple Silicon. However, these are all just rumors, so remember to take them with some salt.