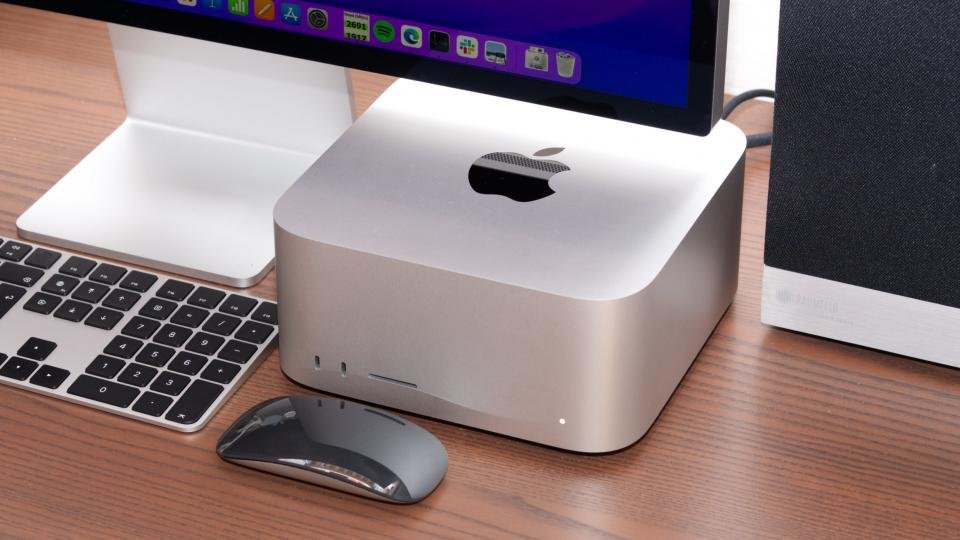 The Mac Studio is a remarkable computer: powerful, compact, elegant and quiet

Cards on the table. I’m not the target audience for the Apple Mac Studio. Sure, I’d love to have one on my desk for the rare occasions that I need to edit 4K video, but it would be overkill even for that, let alone the majority of my work. I’m a journalist who writes and edits product reviews and, for this workload, the Mac Studio is the proverbial hammer to crack a nut.

That being said, as I write this, I do have a Mac Studio on my desk, ready to review, and very nice it is, too. In fact, it’s more than that. Of all the laptops and PCs, tablets and phones I’ve covered over the years (and it’s been a few), the Mac Studio has been one of my favourite things to use and review and it stands among the most impressive technological achievements I’ve ever covered.

Here is a computer that will tackle the heftiest of workloads while barely breaking a sweat; it’s smaller, quieter and consumes less energy than most. It isn’t the perfect tool for every task – no one computer ever is – but it takes desktop computing into territory it has never been before.

Apple Mac Studio review: What you need to know

The Mac Studio isn’t something otherworldly or magical, though. Instead, it’s the culmination of the work Apple has been doing since it announced its own silicon, the M1 SoC, way back in 2020.

Essentially, it’s a souped-up Mac mini designed for heavier workloads. It’s taller – about 2.5 times the height – and heavier, and mostly that’s thanks to a beefier internal heatsink and a pair of large fans. Just like the Mac mini, though, the Mac Studio is designed to sit on your desktop and it occupies exactly the same amount of space.

For those lucky enough to be able to afford one, the Mac Studio comes in two versions: one with the ten-core M1 Max chip at the helm and one with the all-new 20-core M1 Ultra. The latter is an absolute beast of a processor, comprising two M1 Max chips stuck together using a proprietary Apple interface technology called UltraFusion, a GPU with up to 64 cores and a frankly gut-trembling 32 channels of memory bandwidth delivering a theoretical peak of 800GB/sec.

As for RAM, there’s plenty of that to go around, too. The base M1 Max Mac Studio comes with 32GB of LPDDR5, while the M1 Ultra starts at 64GB, and these amounts can be ramped up to 64GB or 128GB respectively. Storage, meanwhile, starts at 512GB for the M1 Max or 1TB for the M1 Ultra model and can be boosted, for the price of a small family car, to 8TB if you so wish.

Perhaps even more remarkable than all this is that Apple appears to have bowed to pressure from its users and has included a decent range of ports and sockets at both the rear and the front of the Mac Studio. 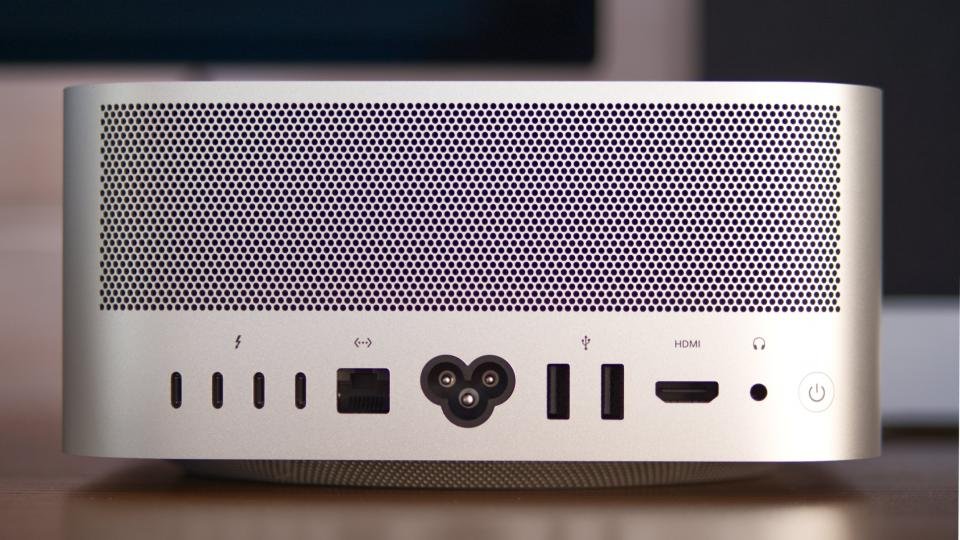 On the back are four Thunderbolt 4 ports, two USB-A 3.2 Gen 1 sockets (5Gbits/sec), one HDMI output, a 10GbE network port and a 3.5mm headphone jack that supports high impedance headphones.

On the front there’s an SDXC card slot with UHS-II support and a pair of USB-C ports, which differ in their specification depending on which model you buy. If you go for an M1 Max Mac Studio, these ports are 10Gbits/sec USB-C ports, while on the M1 Ultra Mac Studio they’re full-blown Thunderbolt 4 ports capable of transfer rates of up to 40GB/sec.

One other thing you need to bear in mind, whichever model you purchase, is that the Mac Studio is not upgradeable. At all. So make sure you buy the specification that meets your needs. 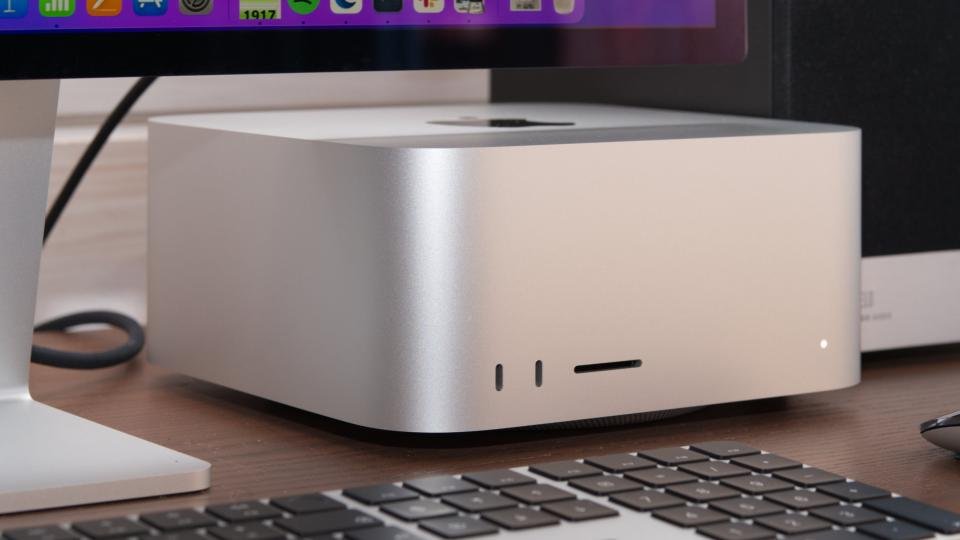 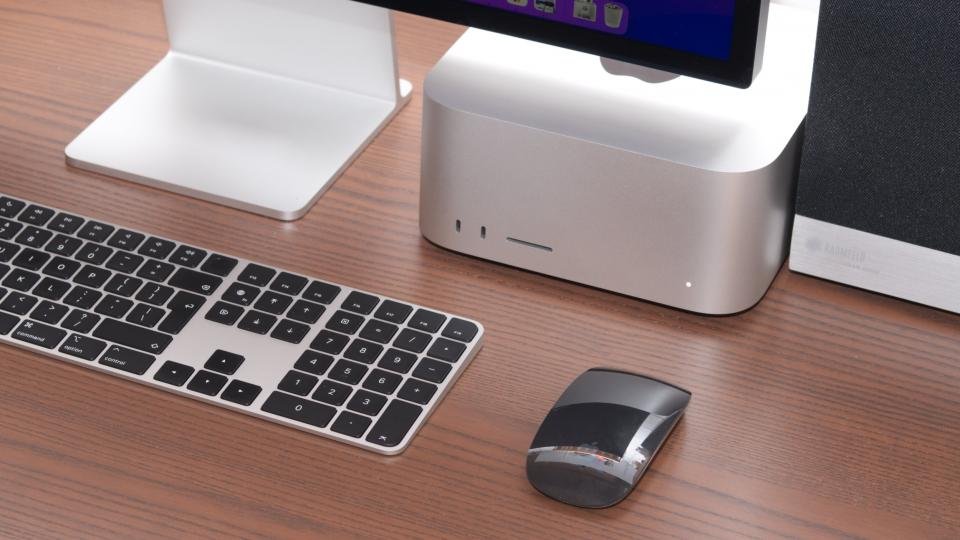 As a compact workstation machine, there’s nothing that comes close to the Mac Studio’s combination of size, quietness and power efficiency, so when it comes to competitors you’re looking at a range of rather different machinery. You can choose between much less powerful machines of similar dimensions; typically larger PCs that consume huge amounts of electricity; or workstation laptops, which are more portable but noisier and unable to match the Mac Studio’s power or quietness.

The other critical question is whether the Mac Studio’s rivals deliver on price and performance. When it comes to the M1 Ultra Mac Studio, you’re looking at Windows PCs running something like a 12th Gen Intel Core i9-12900K (16 cores), an AMD Ryzen 9 5950X (16 cores) or perhaps an AMD Threadripper 3960X CPU (24 cores).

Prices for systems based on these CPUs vary, but for an Intel Core-i9 12900K PC that’s equivalent in specification and performance (very roughly speaking) to my £6,199 review Mac Studio, you’re looking at prices from around £2,500 from a vendor such as PC Specialist, which is a lot less than the £6,199 Apple is charging.

Normally at this point in a review I’d go straight into a section on design, but there isn’t much to say here that I haven’t already covered. It’s a fairly smart silver box that looks like a tall Mac mini, but with a more practical selection of ports and sockets.

As I sit here writing this review in my kitchen at home, I can’t hear it at all. In fact, the loudest thing I can hear in the room is my Samsung fridge freezer humming away behind my left shoulder. I can also hear the faint whispering of tyres on tarmac through the double-glazed patio doors and the occasional chirp as birds in the garden stock up on peanuts from the bird table. But from the Mac Studio? Nothing. Zero.

I can’t hear it even when I’m running the most intensive of benchmarks, while rendering video projects or attempting to push it to its limits by layering up multiple streams of raw 8K video in DaVinci Resolve. 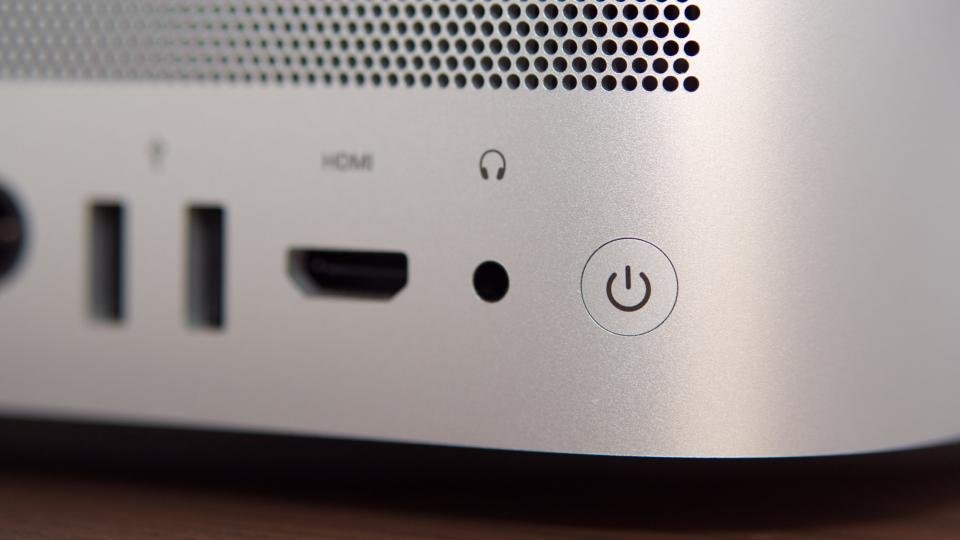 Okay, so I can hear a soft whooshing if I bend over and put my ear right next to the Mac Studio’s enclosure, and I can feel a tickle on my palm if I hold it right next to the perforated vent at the rear. However, to all intents and purposes, this thing is silent.

These factors, and the Mac Studio’s compact chassis, are the main attractions of the Mac Studio. Although it’s an insanely fast computer in its most powerful guise, there are faster machines available, especially those based on AMD’s latest Threadripper CPUs.

We haven’t reviewed any of these, which is why the Mac Studio is comfortably the most powerful machine in our own benchmark database (see charts below), but you only have to delve into the Cinebench, Geekbench or Puget Bench websites to see that even the beefiest Mac Studio lags a fair way behind the most powerful workstation machines. 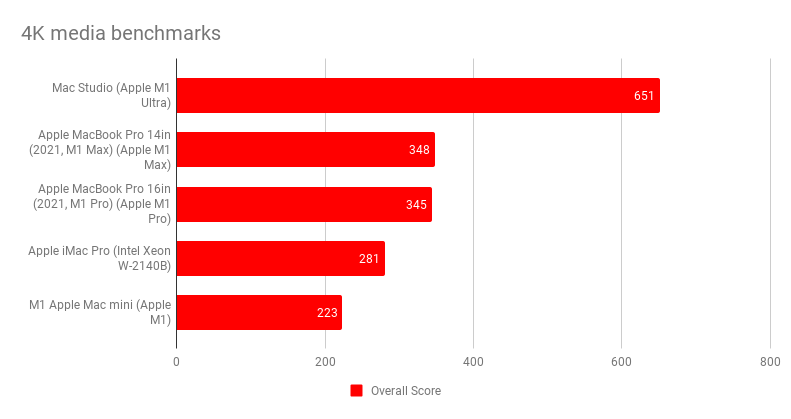 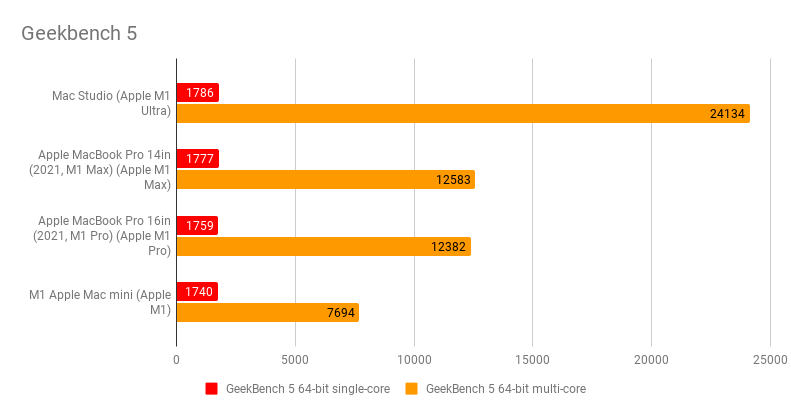 Still, what is here is still very impressive, especially if you go for the M1 Ultra Mac Studio. This is a processor that consists of two M1 Max chips stuck together, so it’s somewhat unsurprising that it has double the CPU cores at 20 – 16 of these are dedicated to high-performance tasks, four to more low-power jobs – and double the GPU cores at either 48 or 64, depending on the model you choose.

Dual CPU and GPU computers are nothing new, but what’s interesting here is the way Apple has combined the two chips. Instead of presenting both CPUs and GPUs to the operating system as separate entities, as other dual CPU and dual GPU systems do, and leaving the software to make its mind up about how it’s going to use them, the M1 Ultra appears to software as a single CPU and GPU. The advantage of this is that applications can instantly make use of the extra power on offer without having to specifically support multi-CPU and GPU operation.

That being said, benchmarks suggest that even the M1 Ultra based Mac Studio might not be the best computer to choose if your workload involves intensive use of GPU processing. I ran the Geekbench 5 Compute benchmark on the Mac Studio, which is designed to test this very thing and compared it a variety of results from the Geekbench 5 database and found it lags behind both laptops and PCs equipped with GeForce RTX 3060 GPUs and higher. These machines will be much cheaper than the Mac Studio. 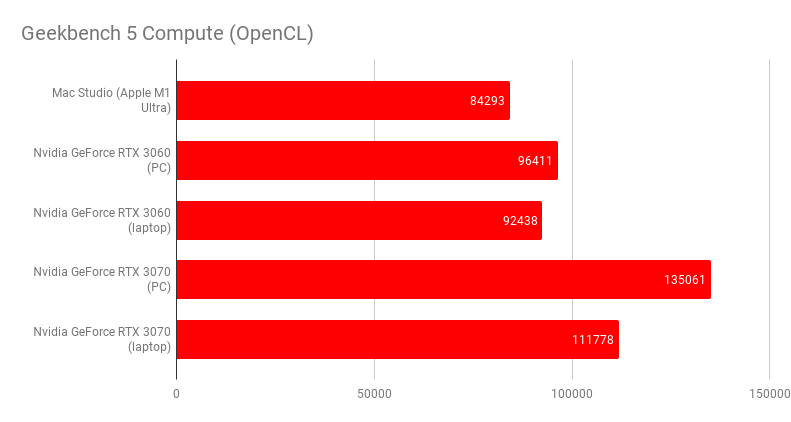 Of course, while buying a Windows PC of equivalent performance to a Mac Studio is going to cost you a lot less, there are drawbacks, one of the most significant of which is how much power they consume.

A Windows desktop PC system, for instance, with a Core i9-12900K desktop CPU at the helm and an Nvidia RTX 3090 GPU would easily consume more than 700W at peak power, where the M1 Ultra’s maximum rated power consumption is a mere 370W. Ticking over, it consumes around 14W to 17W – little more than a light bulb – and even when running our in-house multitasking benchmarks it peaked at a mere 100W.

In a world where electricity bills are rising at a terrifying rate, that might be reason alone to consider a Mac Studio over a traditional PC workstation, especially for businesses who have many employees using powerful workstations for their day-to-day work. 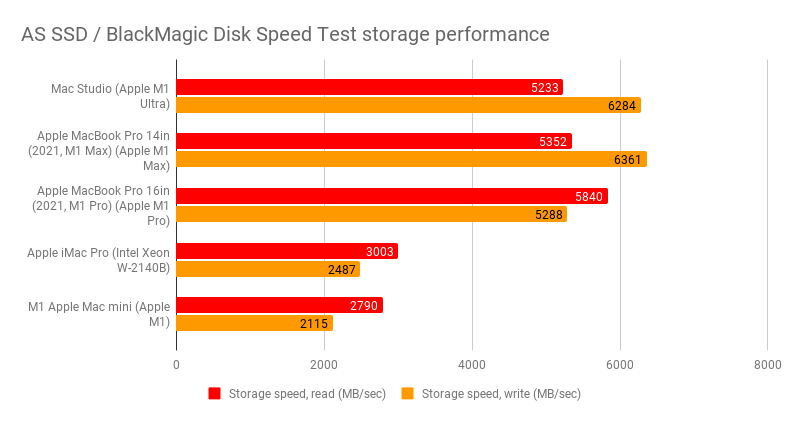 There are other areas where the Mac Studio thoroughly trounces the competition, too. The maximum memory bandwidth on the M1 Ultra is an astonishing 800GB/sec (the M1 Max delivers an equally impressive 408GB/sec), dwarfing that of other processors. For comparison, the Intel Core i9-12900K tops out at 76.8GB/sec while the AMD Ryzen Threadripper 3990X, a CPU that costs on its own more than £4,000, reaches 95.4GB/sec. Whether you’d actually be able to appreciate the benefits, however, is questionable, even with 128GB of unified memory on board.

Storage speed is excellent, too. With the 2TB SSD installed in my review sample, I measured sequential read and write speeds of 5,233MB/sec and 6,284MB/sec respectively, which is rapid enough to ensure that moving even the largest files around won’t be too time-consuming.

The Mac Studio is a seriously impressive thing. It’s small enough to sling in a bag, astonishingly quiet and highly energy-efficient, and for such a powerful computer that’s an immense achievement. Dare I say it, it’s reasonably practical as well.

If those qualities are important to you and you simply cannot bear the idea of switching to Windows, then the choice is easy. Just go out and buy one.

For those who might be a touch more platform-agnostic, however, or for whom upgradeability is a must (the Mac Studio is not upgradeable at all), justifying the significant price premium the Mac Studio represents over a PC of similar capabilities will likely be more difficult. Bigger and noisier they may be – and certainly more expensive to run – but if pure horsepower is what you need and your workload involves a lot of GPU processing, a PC workstation with a top-end CPU and GPU is the way to go. 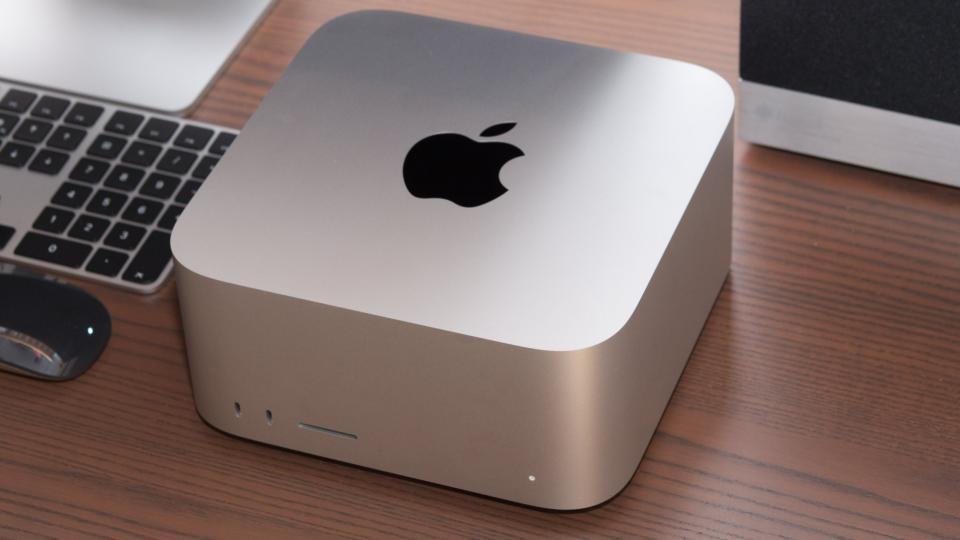