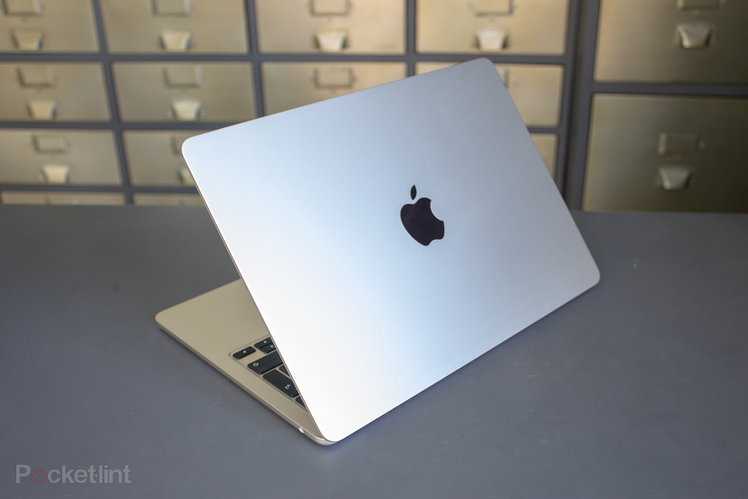 From the moment Steve Jobs pulled the original MacBook Air from a manila envelope in 2008, the line has been used by Apple to showcase the next steps in the evolution of the Mac.

It’s been an unpredictable ride for the MacBook Air since then. Some iterations have been overshadowed by the MacBook Pro, while others – like the M1 MacBook Air released in 2021 and still available in the line up – have performed as the best, most rounded laptop on the market.

Does the 2022 version of the MacBook Air with the performance upgrade to the M2 chip become the new go-to for most people looking for an all-rounder laptop, or should you skip over this model?

The answer, dear friends, is absolutely do not skip this one. The M2 MacBook Air is a stunner and it’s got the personality to match too. Here’s our review.

The 2022 Apple MacBook Air is a far departure from the 2020 model and it’s beautiful. Yes, we did just call a laptop beautiful and we are going to stand by the statement. Now more akin to the MacBook Pro released in 2021, the Air’s signature wedge design that we’ve had for nearly a decade is no more for this model. 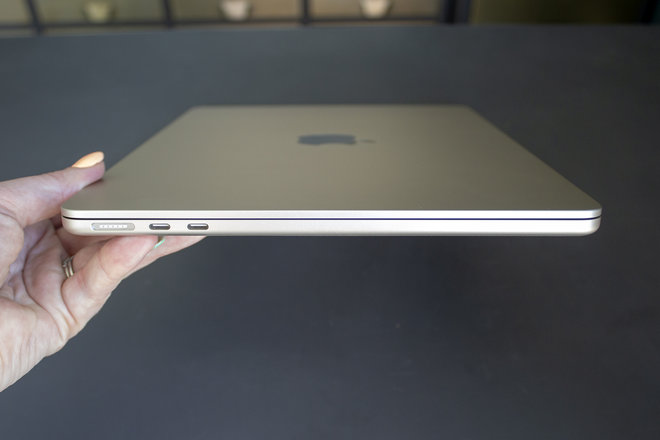 In its place is a flatter, boxier look and it’s exactly the refresh we wanted to see. For those that prefer the wedge shape though, there’s still the M1 model. The lid on the new model meanwhile is completely flat, rather than offering a curved finish and the same goes for the bottom. It’s delightfully symmetrical and uniformed, while the flatness makes for a very solid and sturdy machine in use.

A number of design features have been stripped out in order to create a device that is both thinner and lighter – noticeably so too – than its more expensive sibling, the MacBook Pro however. Most notably there’s no SD card slot or HDMI port – though most average users probably won’t miss these – and the speakers are in a different place too. 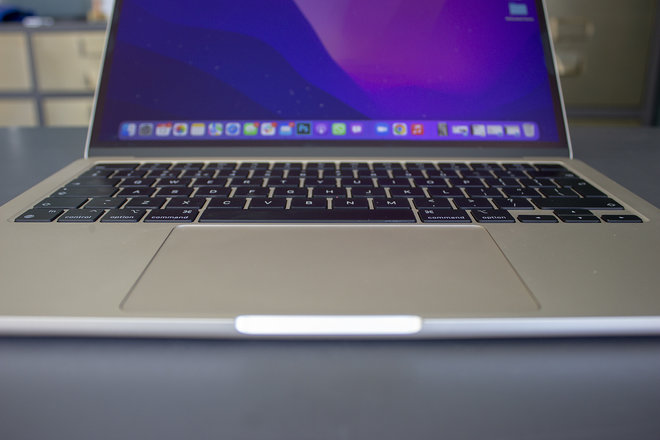 Rather than flanking the excellent Magic Keyboard with speaker grilles on either side, like the M1 MacBook Air and the MacBook Pro do, there are two hidden speakers between the top of the keyboard and the screen, taking advantage of the hinge space – more on the speaker performance further down.

What you will find in terms of ports are two USB-C (USB-4) / Thunderbolt 3 ports and a MagSafe fast charge connector down the left side, while the right side features a 3.5mm headphone jack on the right. To give you an idea about how super slim the Air is, that jack only just fits into the space available. 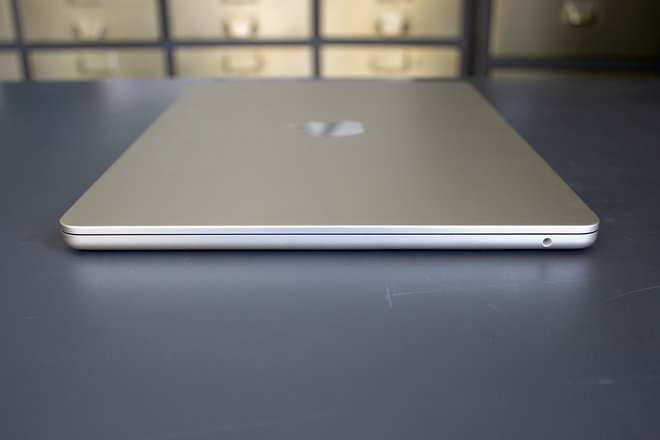 When it comes to colour options, the M2 MacBook Air has four of them: Midnight, Starlight, Space Grey and Silver. The latter two of course the more standard of the offering. We had the Starlight model in for review and we love it, but we love the Midnight too. Our advice: opt for one of those two for something a little different.

The Apple MacBook Air (M2, 2022) might be 20 per cent smaller in terms of volume than its predecessor, but that’s not affected the display size. In fact, the M2 MacBook Air squeezes an extra 0.3-inches into its footprint, offering a 13.6-inch (2650 x 1664) screen thanks to reduced bezels – something the company has also done with its iPads.

The reduced bezels make a big difference visually compared to the M1 MacBook Air, delivering an overdue upgrade and a much fresher look overall – the larger bezels were starting to look a little dated. 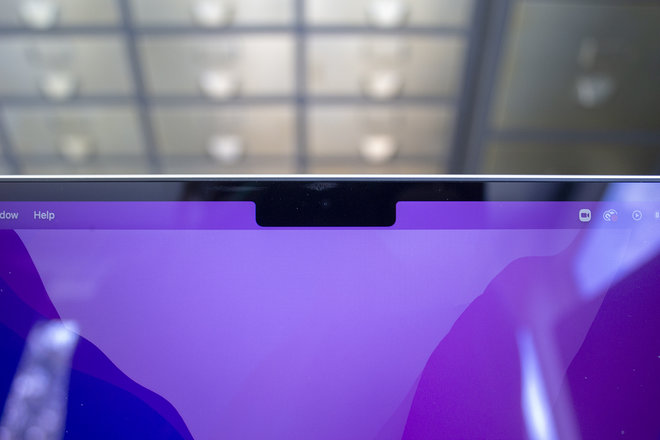 There’s a notch at the top of the display housing a new and great 1080p camera, like the MacBook Pro 14-inch (2021), and while that notch might divide opinion, we think it’s significantly nicer than the thicker bezel alternative. It means the menu bar isn’t as squashed too, and that in itself is more pleasant visually.

The M2 MacBook Air also upgrades to a Liquid Retina Display compared to the Retina display found on the M1 MacBook Air, offering a 25 per cent jump in brightness to 500nits and it’s stunning. Sadly it is still not touch enabled, but colours are noticeably more vibrant with more depth and richness when side-by-side with the M1 MacBook Air. 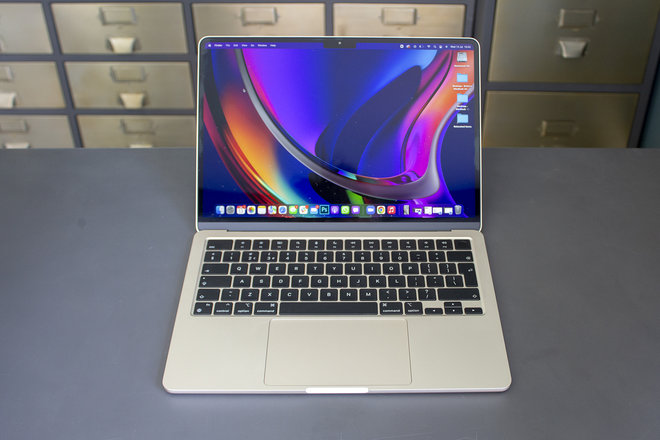 Now don’t get us wrong, the M1 MacBook Air still offers a brilliant display, it’s just the M2 MacBook Air is punchier, which is great for the viewing experience overall. Elsewhere, it has the same technology as the M1 MacBook Air though with features like True Tone that sees the screen adapt to your environment and the P3 wide colour gamut both on board.

The only other thing to note on the display is the MacBook Air branding has been removed from under the display, which also suprisingly is refreshing to see.

While the new design of the MacBook Air is likely to be the main reason for new sales and upgrades, has no one ever told you it’s not all about looks? Luckily, the MacBook Air has a personality to match, offering an upgrade to Apple’s 5-nanometer technology M2 silicon processor with Media Engine. 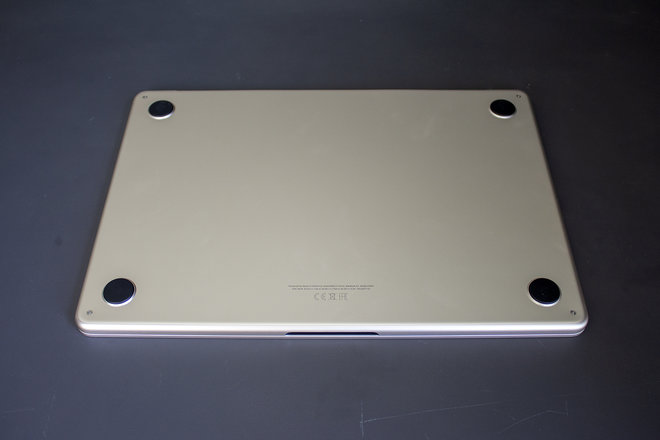 There are two models of the M2 MacBook Air available: one with eight-core graphics and 256GB SSD, and another with 10-core graphics and 512GB SSD. Both can have their storage upgraded to a maximum of 2TB, and while both have 8GB of RAM, this can be upgraded to a maximum of 24GB. Both models house identical CPUs – the eight-core Apple M2 – which promises to be 18 per cent faster than the M1 MacBook Air with 35 per cent faster graphics – and they both come with the Media Engine.

This puts the M2 MacBook Air on track to be a real powerhouse and a great alternative for those that consider the Pro’s performance capabilities as overkill, or for those that don’t need all that power. 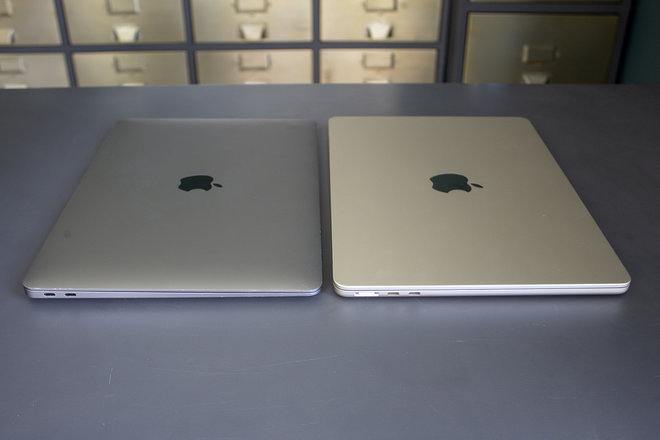 For reference, we had the 16GB memory M2 MacBook Air model with 1TB of storage in for review. The upgrade options available match the M2 MacBook Pro 13-inch (2022) for those that do want – or need – a Pro, while for those that maybe don’t need the performance boost of the M2, Apple is still offering the M1 MacBook Air in the line up, as we mentioned.

If you can justify the extra for the M2 MacBook Air though, it is oh so worth it. We noticed a good difference in raw performance between the M1 and the M2 MacBook Air for general day-to-day tasks, as well as gaming and image editing and the silent operation thanks to the Air’s lack of fan continues to be really refreshing.

Overall, the M2 MacBook Air is an absolute delight to use, with a lovely fluidity in its performance. Everything is fast and responsive to open – especially the apps optimised for Apple Silicon, switching between tasks is an absolute breeze – and will become even easier with MacOS Ventura and Stage Manager – and the M2 MacBook Air has no issues in handling the slightly more demanding features like image editing and gaming. 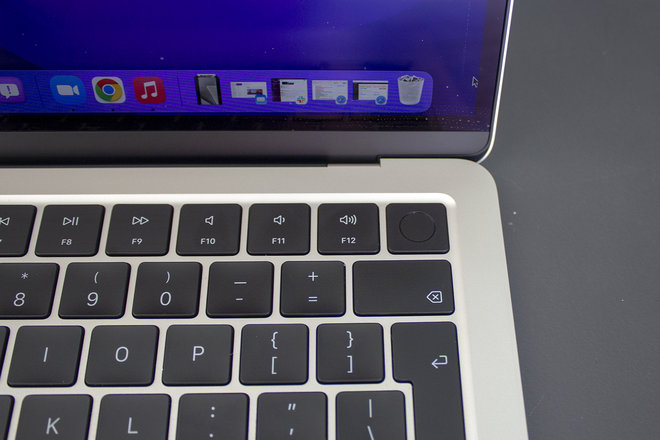 When it comes to typing – which of course we do a lot of at Pocket-lint – the Magic Keyboard continues to be fantastic. Big improvements were made from the older butterfly keyboard a few years ago and not much has changed since. If it ain’t broke, don’t fix it, right? The M2 MacBook Air has the same mechanism as the M1 MacBook Air, though the function keys at the top are now the same size as the rest of the keys, which allows for a larger Touch ID button in the top right corner, so it’s only good changes in this department in our opinion.

You might have noticed we didn’t mention Face ID – that’s because the MacBook Air (M2, 2022) still only offers Touch ID rather than Face ID so you can’t unlock it with your face, but the Touch ID button is quick and responsive so we won’t complain too much here.

How long does the M2 MacBook Air’s battery last?

The Apple MacBook Air (M2, 2022) promises 18 hours of battery life for video playback or 15 hours using the web. Naturally, battery life is based on the user and what they do with the laptop so it can vary drastically user-to-user. 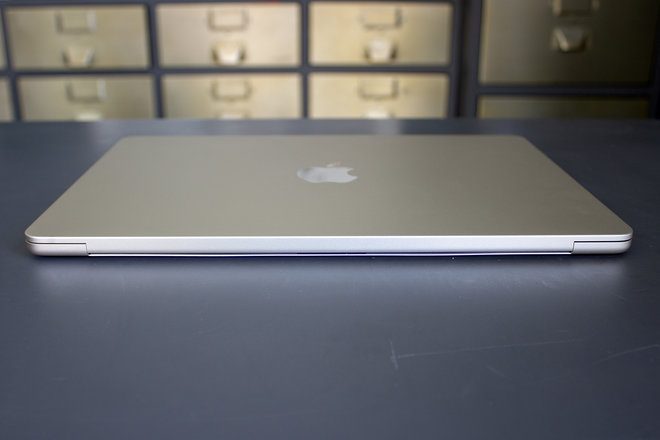 For us, we have multiple tabs open in Safari, are often editing multiple images in Photoshop, and have various apps running in the background, including Slack, Mail and WhatsApp, whilst also taking video calls throughout the day. We got around 12 hours from the M2 MacBook Air before we hit the 10 per cent mark, which is pretty good going really. Charging is quick thanks to the return to MagSafe 3 too.

Our MacBook Air model also came with the 35W Dual USB‑C Port Power Adapter (included with 10-core and 512GB models) that will allow you to charge your MacBook Air and iPad or iPhone at the same time – very handy. Power is split equally between the two devices until one is fully charged.

We briefly mentioned at the beginning of this review, that the redesign of the MacBook Air meant the speakers moved away from sides of the keyboard to the top, slotting in between the screen and the base. This is perhaps the only area this excellent laptop doesn’t excel, though it’s still more than good enough. 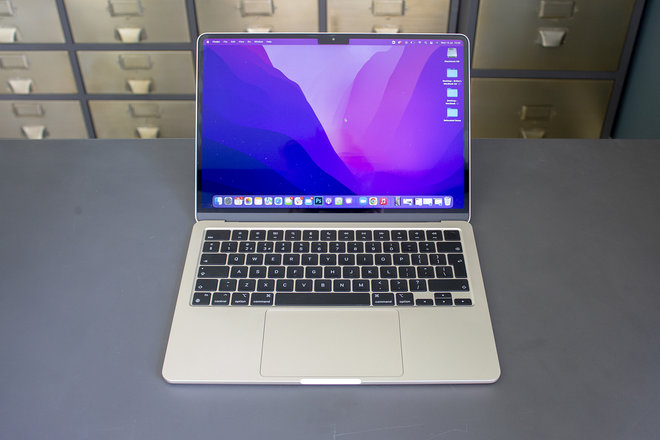 We tested the four-speaker sound system with a number of films, including Bohemian Rhapsody on the Apple TV app and the sound stage wasn’t as wide or as complete as the M1 MacBook Air offers from its speaker grilles either side of the keyboard. The M2 MacBook Air instead, is more tinny and muffled – likely because the sound has less space to travel.

That said, the built-in speakers are more than capable of enabling you to watch a movie in comfort and they support Apple’s Spatial Audio when playing music or video with Dolby Atmos too – which the M1 MacBook Air doesn’t.

The MacBook Air (M2, 2022) also supports Spatial Audio with dynamic head tracking when using AirPods (3rd generation), AirPods Pro and AirPods Max and this worked brilliantly, as it does on the MacBook Pro models. 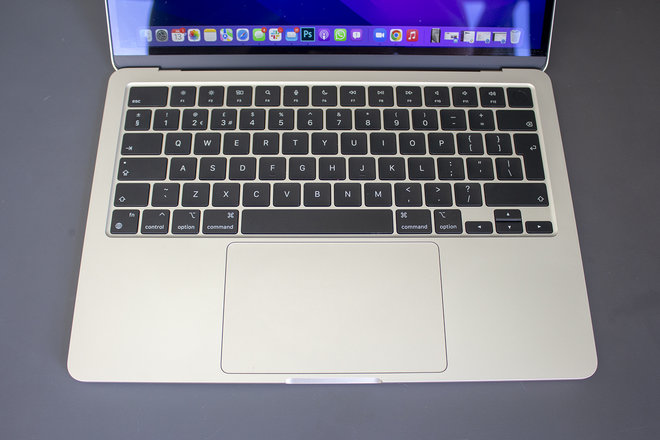 When listening to music, the M2 MacBook Air’s speakers performed better than video in our experience too, with The Beatles’ Here Comes The Sun and Ed Sheeran’s Shape of You both sounding great – though again, not quite as good as the M1 MacBook Air. There’s not huge amounts in it but worth a mention nonetheless.