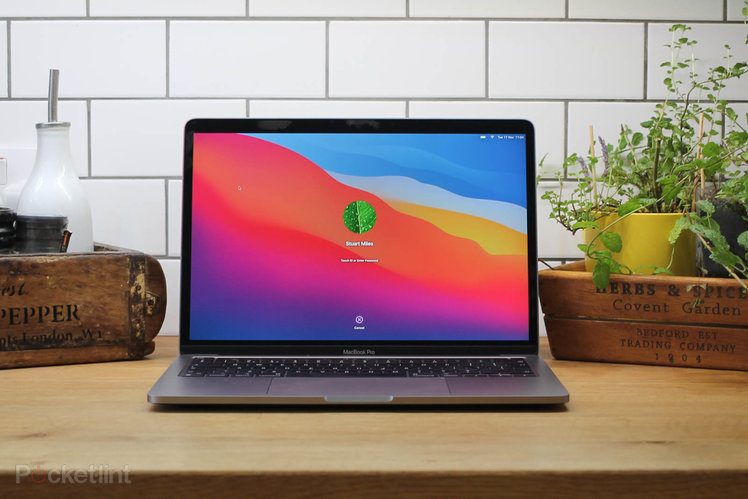 If you’re feeling a moment of déjà vu that Apple has already released one MacBook Pro refresh this year, don’t worry, that is the case, but this is one is now powered by Apple’s M1 processor.

Is Apple’s move away from Intel a sensible one though? Will you have to make compromises to carry on working the way you have been? More to the point, should this be your next Mac or even laptop full stop?

There might be a new processor powering everything, but Apple hasn’t made any changes whatsoever to the MacBook Pro’s design. We said the last-gen one was starting to look “a little tired”, so it’s a shame this isn’t a total overhaul. 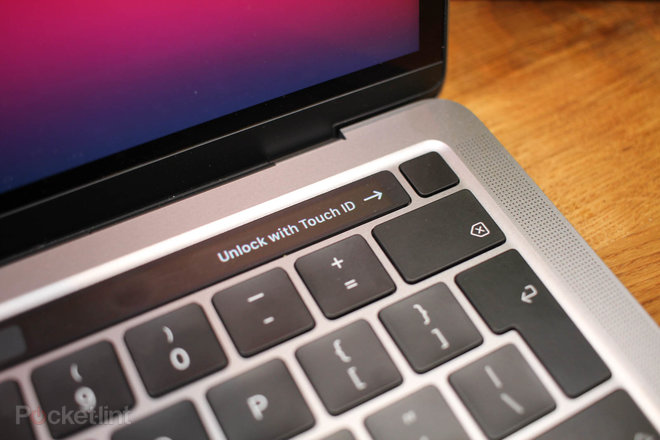 If you were hoping for the move to Apple’s own silicon to bring in a brand-new design, you’ll be disappointed. Apple might be shaking things up under the hood, but for now it isn’t taking any risks with the look and feel of the MacBook Pro.

But at least the software has been improved to make it slightly better. The only difference is the option of four USB-C ports has been dropped – you only get two and a headphone jack. 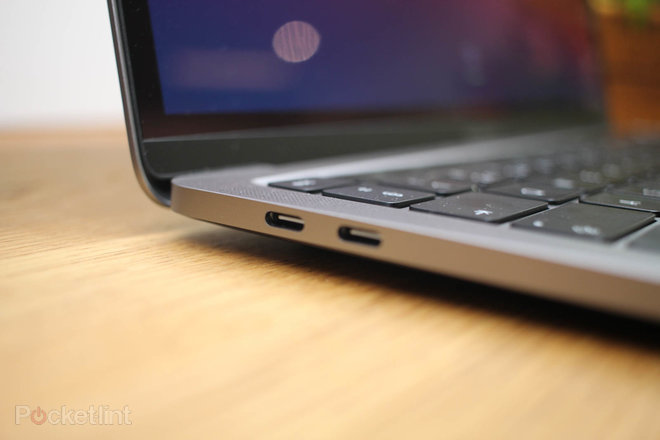 As we’ve said in our previous Apple MacBook Pro reviews over recent years: the design still works, but it is getting slightly dated in terms of what the competition now offers. The bezels are big by comparison, while the design still very blunt. It’s had a good run for its money, but we suspect it will be refreshed at some point in the future, and we’re very conscious that this model could well be the last iteration.

So, if the design hasn’t changed, what has? Well, the biggest headline here is that this MacBook Pro is no longer powered by an Intel processor (well, unless you select that option) – but an Apple-made one instead.

Dubbed the M1, it is built on the same Apple-made chip architecture that powers the iPhone and iPad – and that means that Apple controls everything within the system rather than having to work with another company. 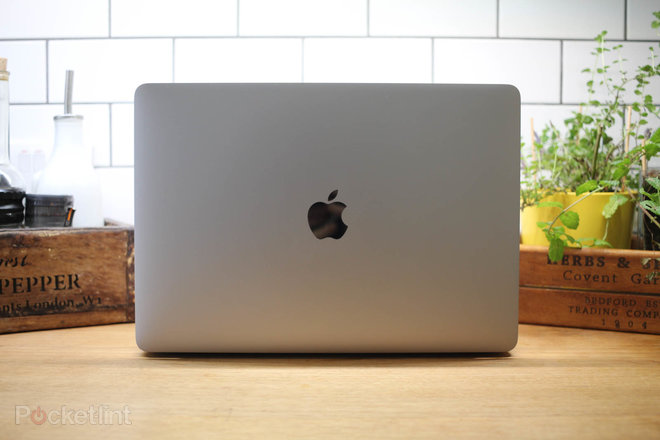 That supposedly means a faster processor and the promise of vastly improved battery life. It also means other things, like instant wake the moment you start to lift the lid of the laptop, rather than having to wait for everything to kick into action.

Apple claims a 2.8x increase in processor performance compared to similar-spec 1.7GHz quad-core Intel Core i7 processor. Apps load incredibly quickly – almost instantly at times – and gone are the days of watching the icon in your dock bounce repetitively as you wait for things to happen.

To ensure The MacBook Pro can keep running faster for longer Apple has included an “Active Cooling” system – i.e. a fan – but this is so silent that we’ve yet to really hear it on the tasks we’ve been doing so far. There’s no fan in the MacBook Air, which also now features the M1 processor.

However, it’s worth noting that you can only go up to 16GB of RAM in the new MacBook Pro. The unit we’re testing features 8GB RAM, which isn’t as “Pro” as many will necessarily want. 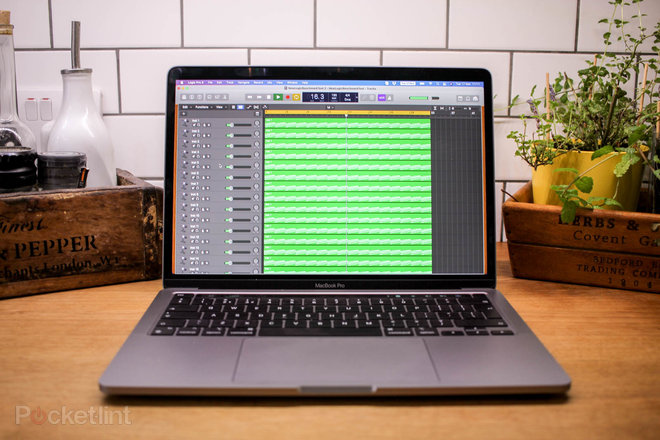 Still, heavy processing tasks don’t seem to faze the M1 processor at all. Whether that’s graphics editing with apps like Affinity Designer, processing music files in Logic Pro, or editing video footage in Final Cut Pro, everything zips along.

And this is us testing on the non-optimised versions right now. It’s a vast improvement on what we’ve seen before, even compared to the latest Intel-powered MacBook Pro models, and when you consider that hardly any apps have been optimised yet there’s room for more improvement in the future.

So this is likely to only get better as more and more developers start taking advantage of the not only the M1’s 8-core processor, but the 16-core neural engine that should help with tasks within apps like Adobe Photoshop when an update comes early 2021.

Put simply, the M1 in this MacBook Pro impresses – beyond what we would expect for the first iteration of the processor – and exceeds what we were expecting. Yes, it’s as fast as Apple claims.

We have to admit, we thought – nay expected – there to be plenty issues running apps. This is a first-gen processor after all. But the reality is that we’ve not experienced any issues so far with the various apps that we’ve been using during our review. 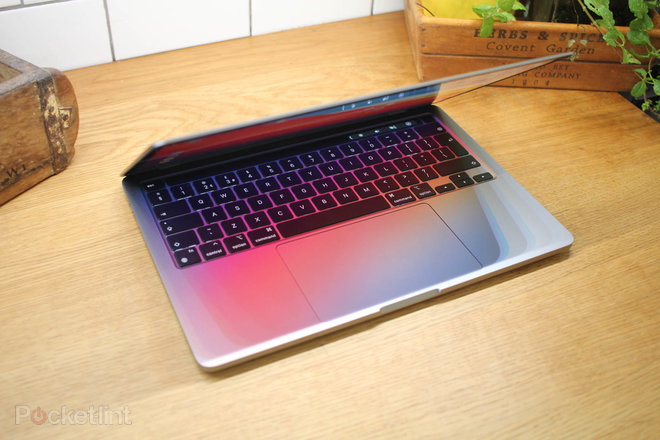 Apple has managed this by offering a three-tiered approach. Universal apps, Rosetta 2 apps, and iPadOS/iOS apps.

Universal apps are those that have been created specifically for macOS. As you can imagine, these work – and fast. At the moment they are mostly Apple apps, although already we’re seeing other app developers like Serif with Affinity Designer and Affinity Photo already offer Universal apps.

Then there’s Rosetta 2. This is the technology that allows you to run Intel-based apps that have yet to move to Universal. Your Zoom, Skype, Office 365, Adobe Creative Suite, and the such – let’s face it, basically most of the apps that you’ll use everyday. So it was important that this worked seamlessly.

Finally, there’s iPad and iPhone apps where the developers have said that it’s okay to make those apps available on the Mac. Before you wonder whether that’s just going to lead to carnage considering the MacBook Pro doesn’t have a touchscreen, don’t fret. 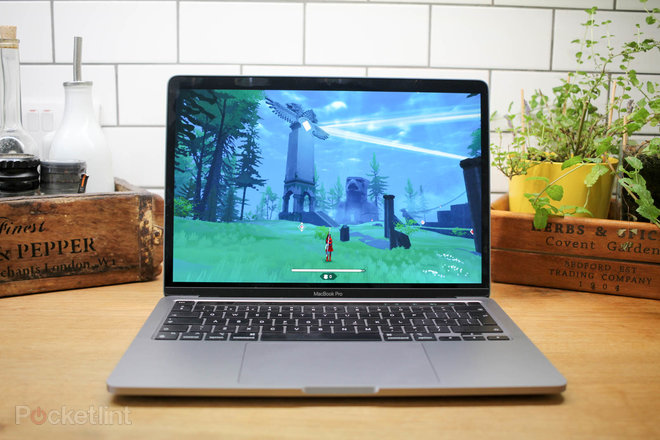 Apple isn’t allowing any iPad or iPhone app into the Mac Store that doesn’t work with the company’s laptops specifically. That means no apps that need GPS or rear camera support, for example. Furthermore, developers can opt out of the Mac, as a number already have, if they aren’t happy with being available on the MacBook Pro. There’s no Facebook app as one example.

With all those tiered options you would expect something to go wrong or something to be overly complicated. But that hasn’t been the case in our experience. The apps we’ve installed have just worked. Rosetta 2 is effectively invisibly working in the background to make everything seamless. It’s actually a bit of an anti-climax if we’re being honest. For those nerdy enough to care what app type they are using you can see via the info panel in Finder.

Once upon a time the MacBook Air used to be the MacBook to get if you wanted the best battery life. It would last all day and then some – but to achieve that battery life it meant you give up some power, and the higher-resolution Retina display.

Fast-forward to the end of 2020 and the M1 MacBook Pro enjoys not only MacBook-Air-of-old battery life, but iPad-like battery life too.

Apple claims 20 hours of battery life on a single charge, and although we’ve yet to get that – that claim is based on just watching videos – we’ve got a solid day and a half on battery life, so around 13 hours of use, in average office work conditions. 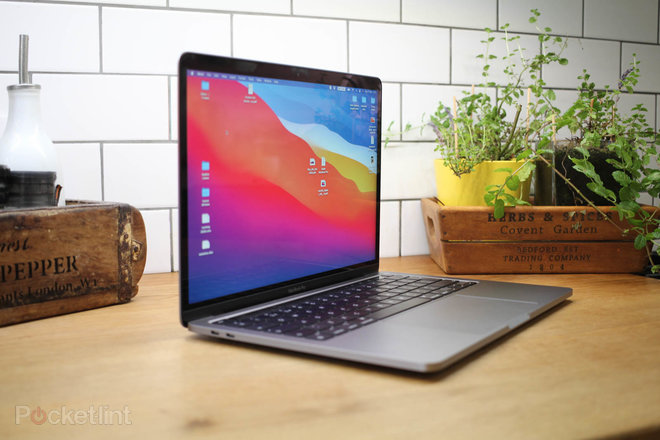 That’s really decent innings for a day including using a number of apps, an unhealthy amount of time on Skype and Zoom calls, as well as editing the Pocket-lint podcast on GarageBand, and doing some design work with Affinity Designer.

When the Pro is turned off, the battery doesn’t seem to deplete, which is great news. And using it with less aggressive apps the battery life hardly moves. An evening of surfing and writing resulted in just 15 per cent of battery being used.

The M1-powered Mac launch coincides with the roll out of macOS Big Sur. It’s a big leap forward in terms of performance and design over previous versions, mainly to cope with the new Apple M1 processor.

That means that apart from a new lick of paint to make the experience more iPad-like there isn’t much to get excited about. Much in the same way as with previous software updates. 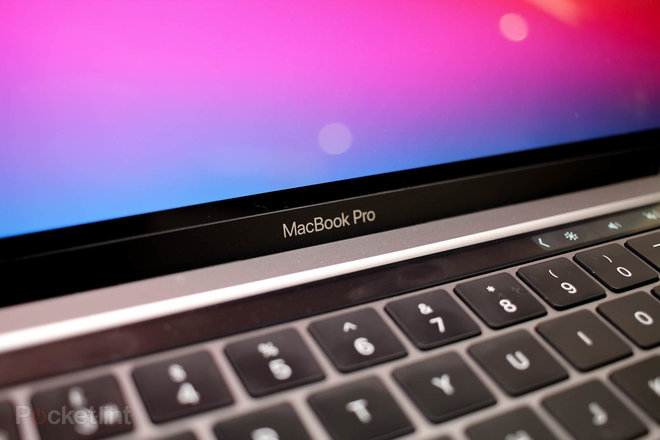 There’s a new Safari browser, which on this MacBook Pro is blisteringly fast, and a greater privacy focus – which translates to you having to give every app permission to do anything (it actually gets numbing after a while).

If you’re a Messages fan then you now get greater parity with what you can do on your other Apple devices, too, but there’s still no Animoji if that’s your thing.