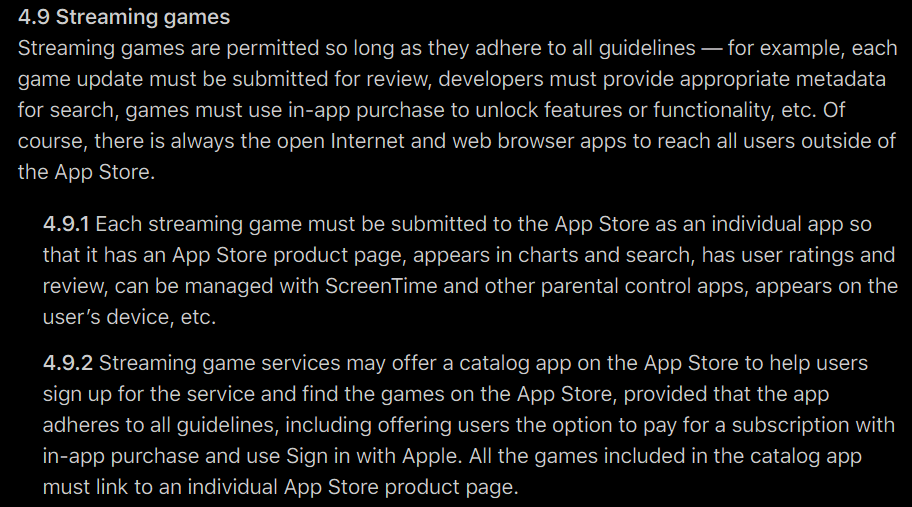 Apple has been at the receiving end of barbs from the likes of Microsoft, Facebook and NVIDIA when it comes to cloud-based game streaming services, thanks in no part to App Store policies which are reportedly anti-competitive and prevent them from offering a optimal experience to users. Microsoft had to pause the beta testing of its xCloud service on iOS just weeks before its global launch, Facebook had to remove the gaming capability of its Facebook Gaming app as soon as it was listed on the App Store, while Google’s Stadia never made it to iPhones or iPads. Apple has previously noted that these services could violate App Store policies. Now, Apple has updated its App Store policies to allow these apps on the App Store, but with some demands that would likely still be the bone of contention.

“Streaming games are permitted so long as they adhere to all guidelines — for example, each game update must be submitted for review, developers must provide appropriate metadata for search, games must use in-app purchase to unlock features or functionality, etc.” Apple’s updated guidelines say. “All the games included in the catalog app must link to an individual App Store product page,” the company adds. What this means is all games offered by a game streaming service must also have a individual listing page on the App Store and they must be submitted individually for review by Apple’s team. What this means is if you’re a Google Stadia subscriber, you’ll have to downloaded each game’s app separately on your iPhone or iPad to play them, aside from downloading the Stadia app.

Another important caveat is that all these services must offer Apple’s own in-app payment system that follows the App Store guidelines. So essentially, Apple will take its standard 30% cut for all in-app purchases. And then there is also a possibility that the company could also take an equal cut when users pay to renew their monthly xCloud or Stadia subscription. As wild as it sounds, the possibilities of it happening are actually not too far-fetched. The gist is that Apple is unwilling to part ways with its 30% cut, but the App Store policies means Apple will charge the game developers and publishers 30% of their revenue from in-app payments, and will also charge service owners such as Microsoft or Google who already have revenue sharing deals with those publishers in the first place.

Needless to say, not everyone is happy about it, which includes Microsoft as well as Epic Games CEO Tim Sweeney. “This remains a bad experience for customers. Gamers want to jump directly into a game from their curated catalog within one app just like they do with movies or songs, and not be forced to download over 100 apps to play individual games from the cloud. We’re committed to putting gamers at the center of everything we do, and providing a great experience is core to that mission,” Microsoft said in a statement. And here’s what Epic Games CEO Tim Sweeney had to say regarding the policy update:

The caveats mentioned in the updated App Store policies are essentially what Apple had demanded in the first place. “Our customers enjoy great apps and games from millions of developers, and gaming services can absolutely launch on the App Store as long as they follow the same set of guidelines applicable to all developers, including submitting games individually for review, and appearing in charts and search,” an Apple spokesperson was quoted as saying by Business Insider last month. It remains to be seen how Microsoft, Google, Facebook, and other names in the game streaming business process the change. In contrast, all these services are already flourishing on Google’s Android operating system.

The post Apple permits game streaming services like Stadia and xCloud on iOS, but doubts remain appeared first on Pocketnow.