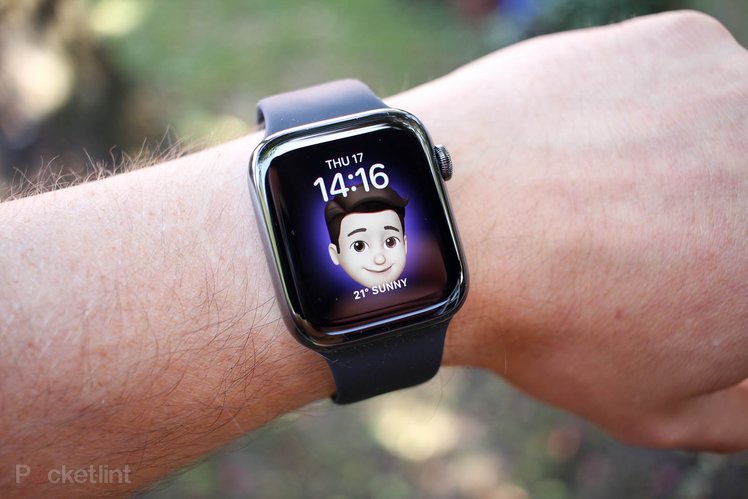 The Apple Watch is now six years old, so has it reached a point where each generation of speed and technological improvements has become barely noticeable?

Not exactly: the Watch Series 6 adds a couple of new features over the outgoing Watch Series 5. But unlike previous years the design has mostly stayed the same and the technology inside it will be invisible to many.

Plus, with the launch of the more affordable Watch SE, Apple is effectively segregating its wearable offering. So does the Series 6 offer enough to set it apart?

The Series 6 model sports the same 44mm and 40mm size options – larger than the Series 3; the same as the Series 4 and Series 5 models – along with the familiar digital crown and touchscreen display combination to control everything.

Long gone is Force Touch as found on the Series 5, replaced by a long press. In some cases, it makes it easier to use. Long press on the weather app, for example, and the display changes between temperature to rain forecast. But, in other ways, like when clearing your notifications, it’s something you’ll miss (there’s now a clear all button though).

Beyond the change in screen tech, there are some new colours and materials to enjoy: for the aluminium Apple Watch you can now get it in blue or (Product)Red, as well as the previous silver, black, and rose gold. For stainless steel, there’s the option of a gold or graphite colourway. Titanium remains, but ceramic has been ditched.

For Nike fans there’s also a variety of Nike versions, while the fashion conscious can opt for an array of Hermès models with accompanying designer bands. 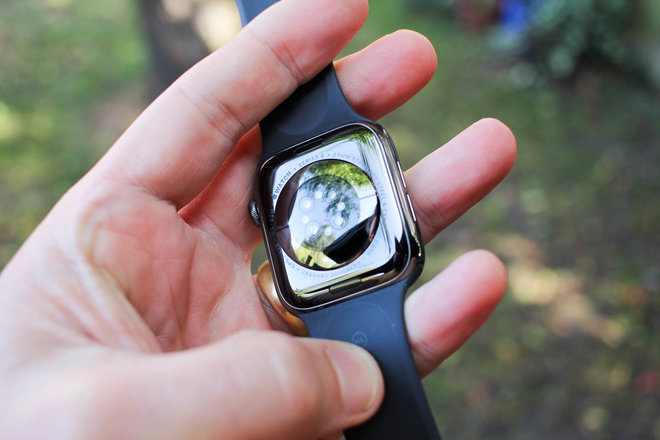 It’s also worth noting that if you opt for the aluminium model and you’re fairly active, the screen is likely to pick up scratches. A year in and our aluminium Series 5 is covered in small marks picked up along the way. The stainless steel and titanium models come with the much tougher sapphire glass.

The Watch Series 6’s screen – which is the same scale and resolution OLED as its predecessor – has two states: on and off. While it’s off the screen dulls but doesn’t go dark completely – which is great when glancing at the time. 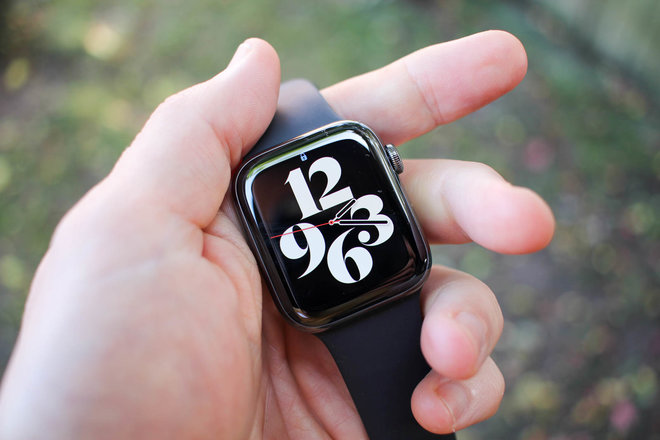 Apple has boosted the screen brightness to 500 nits, up from 200 nits, which makes seeing the screen easier – especially when outside. When it’s off the screen can appear as if it’s still on – the only telltale sign is that many of the watch faces invert their colours to save battery life – which can be a bit distracting in dark environments.

We really like that WatchOS 7 now makes it possible to interact with the complications when the S6’s screen is considered “off” – which should save that double-press we experienced using a Watch Series 5 running on WatchOS 6.

The S6’s battery is marginally bigger than the S5’s was, delivering more run time – around an extra hour. 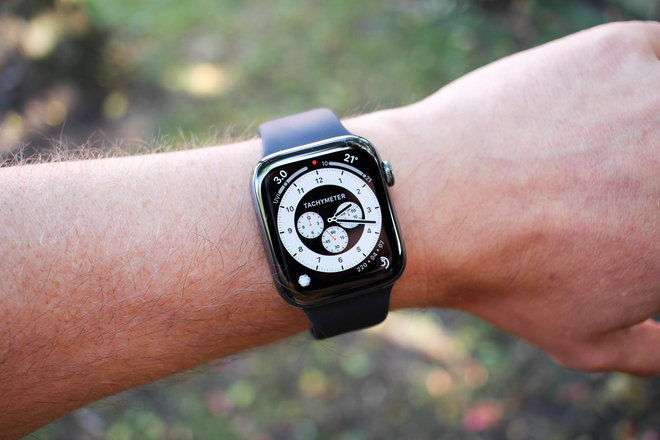 But here’s the thing: if you plan to use the S6 for sleep tracking then your charging habits are going to have to change and that confuses things. No longer will you start the day with a full charge – unless you skip the sleep tracking, of course.

If you do skip sleep tracking then you can get up early, do some exercise, use the Watch as you would a watch, and still have charge spare when you go to bed late.

But use sleep tracking and we found we’d eaten away at 20 per cent of the battery life after six or seven hours of sleep. While you sleep the Watch does go into sleep mode so that always-on display doesn’t keep you awake, but the blood oxygen monitor and heart rate monitor are still working periodically, checking your vitals. 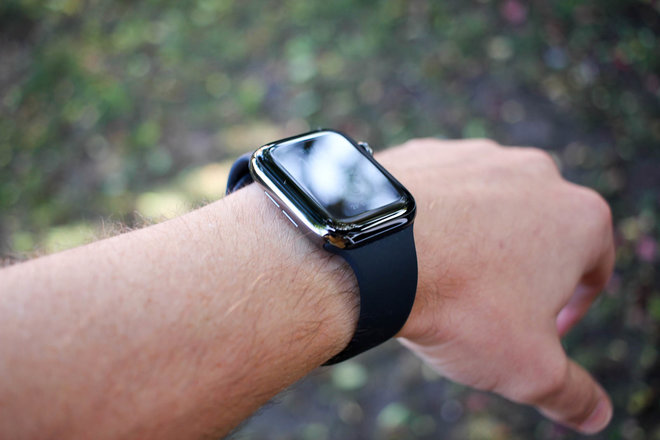 That means we’ve been waking up, in some cases, with less than 30 per cent battery life wondering when we are going to fit charging into the day ahead. That’s probably an “us problem”, but wow the battery anxiety is real.

To try to resolve that issue, Apple says that it has improved charging times. The Watch Series 6 will get you back up to full charge in 1.5 hours. That’s a big increase on previous models, but it’s finding that spare time during your day, or opting, as we have (don’t want to lose that stand goal), to mini charges when we can get it – which feels counterintuitive.

When the Series 5 launched we got a compass, which we got excited about. But, to be honest, we haven’t used it since – and neither have many apps, as far as we can tell.

For 2020 it’s the altimeter that will tell you how elevated you are – be it sitting at your desk or climbing a nearby hill, mountain, or more likely the case for many, office block. 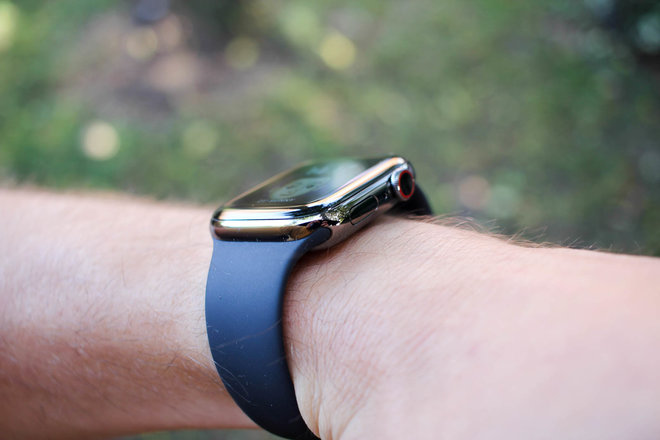 Buried in settings rather than getting its own app, it is at times strange that Apple even bothered to include it. You can have it as a complication on just two of Apple’s Watch Faces – X Large and Modular Compact – find the elevation data in the Compass app, or if you’re still keen access the live data in the Workout app (but only if you head into the settings: Watch App > Workout > Workout View> Outdoor Run > lose a metric > then add Current Elevation).

It’s also unclear, even after talking to Apple, whether the data is actually used anywhere other than to give you a current elevation reading.

The elevation data isn’t in the Fitness app in individual workouts after the fact, for example, and we can’t work out whether the elevation gain data given at the end of a workout is pulling from the new altimeter sensor or the GPS elevation data. We’ve yet to see third-party apps showcase the new data.

Why is this all so important? Well, depending on the activity you do, the additional information could either be considered as a “that’s nice” moment or really useful. Cyclists and hikers will no doubt want to use the data to see how they perform up a mountain. You might not find too much of a need for it on a 5km run, but over 50km cycle is another issue. If you have altitude data you can get a much more accurate version of the ride you actually did. And at the moment we just can’t see that. We’re still digging for information, but let’s hope Apple hasn’t just included it to tick a box.

The other new sensor is a blood oxygen monitor, which can determine your SpO2 level. Again, the tech sounds impressive, but the results and use cases are perhaps less so. There’s not any real concrete data or information as to why it’s needed.

Blood oxygen monitoring will tell you, as the name suggests, how much oxygen you have in your blood. A healthy person is normally between 90-100 per cent, and for us that’s what the Apple Watch S6 has reported. There have been a few times where that number has been wildly off (i.e. you should be dead) or been unsuccessful in getting the results in the first place, which isn’t ideal. 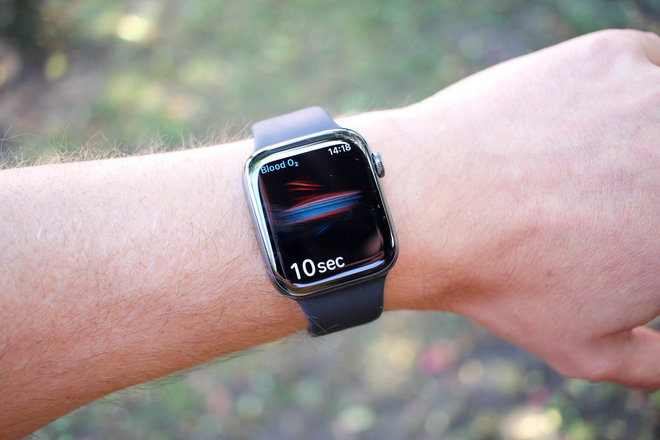 But the bigger problem is understanding what it all means. We don’t have, and we presume you don’t either, a clue whether we should be worried about having a blood oxygen level of 92 per cent one day compared to 98 per cent the next.

So we’re left with the belief that at the moment it’s more a tick box decision – a sort-of because others have it we should have it too – rather than because there is a need for you to know at any given time what your SpO2 is.

Seeing as the always-on altimeter and blood oxygen monitor are two key sensors that the Series 6 offers over the Watch SE, we had thought there’d be wider validation for their presence.

The Watch S6’s processor has been improved, so it does feel fractionally faster when whizzing around the menus compared to the S5. There’s also an improved Wi-Fi antenna thanks to the addition of 5GHz band support.

The Watch Series 6 also gets Apple’s U1 chip launched with the iPhone 11 Pro. The potential is big – allowing you to do things like open your car with your watch – but we’ve not had a chance to delve deeper with it just yet, nor are any apps taking advantage of the system (for now, anyway).

There are plenty of new features that the S6 and previous Apple Watch models will get – including Family Setup, new watch faces, and a Memoji App so you can send stickers of yourself or an octopus to others.

There’s also sleep tracking, which we’re not sold on. The need to set a bedtime and run through a wind-down period prior doesn’t fit with variable days, while the charging conundrum adds battery life anxiety.