A little bit bigger and a little better, the Apple Watch Series 7 is still the best smartwatch around

The Apple Watch Series 7 is one of those products that you could almost take for granted was going to be good. Building on the success of its predecessors, it doesn’t do anything radically different; instead, its improvements are subtle – subtle enough that you may not even notice them if you didn’t know they were there.

That’s not to say the Series 7 isn’t great. Unequivocally, it is. It’s the best smartwatch on the market for iPhone owners and streets ahead of anything Android phone owners have available to them. But if you already own an Apple Watch Series 6, SE or 5, you’ll struggle to find anything here that will entice you to upgrade.

Apple Watch Series 7 review: What you need to know

There are two main changes for the Apple Watch Series 7. The screen is 20% larger and the watch comes with a USB-C charger that tops up the battery a claimed 33% faster than before. It still has the same battery life – Apple quotes this at a fairly unambitious 18 hours with the always on display enabled – and it’s still available in two sizes, although the case dimensions have increased by 1mm to 45mm (the model I’ve been sent to test for this review) and 41mm.

The only other notable changes for the Watch Series 7 are that it is now rated as dust resistant (to IP6X) and it is also a touch more durable, thanks to thicker cover glass. Let’s face it, there IS no serious competition for the Apple Watch in the smartwatch space. If you want a wearable with a vibrant app-based ecosystem that works seamlessly with your phone and that does everything you’d expect a smartwatch to do – and you happen to be an iPhone user – this is still the smartwatch to buy. The price reflects that with the 45mm starting at £449 and the price for the smaller 41mm model at £419. Cellular connectivity can be added for £100 extra.

If you’re willing to set your sights a little lower when it comes to smart features, there are plenty of alternatives, though. If you’re thinking of picking up an Apple Watch Series 7 mainly for the fitness features, you might consider switching your attention to one of Garmin’s sports watches – it’ll save you a fair bit of money. One of our favourite mid-priced Garmins is the Forerunner 245 Music for £300 but you could pick up a Garmin Fenix 6 for £324 that does a bit more. For less than this, there’s the Fitbit Sense at £249, which offers a smaller set of features focused on wellbeing but with better battery life than the Apple Watch, and for fitness fanatics on a budget, you can’t get much better than the Coros Pace 2. There’s also a whole army of Wear OS watches to choose from at around the £200 mark and below, such as the TicWatch E2 at £129 and we also think it’s worth considering some of Huawei’s smartwatches such as the Watch GT 2E and the Watch 3. They don’t have the broad sweep of smart features and or the broad app ecosystem as the Apple Watch but battery life is far better, they come with a decent selection of fitness and health features and they cost significantly less. Although the differences are fairly subtle, if you sit the Series 7 and the Series 6 watches right next to each other, you do notice the bigger screen. A 20% boost in display area is not insignificant and it’s nice that the borders around the edges are slimmer, too. This isn’t just for aesthetic effect. It has a knock-on effect on usability, with larger buttons across the UI and enough screen area now to introduce a full QWERTY keyboard for replying to messages directly on the screen of the watch. This works as well as you could possibly hope, although using dictation via Siri remains the most effective means of text entry on the Apple Watch.

One final note on the larger display. It also has a thicker crystal (50% thicker in some parts according to Apple) that has “refractive” edges that bend the light, allowing you to get a glimpse of the very edge of the display when viewed from side-on. Top that off with a slightly rounder, softer overall shape and the Series 7 is nicer looking than the Series 6 as well. Elsewhere, the display technology has been upgraded, which is evident in a bump in brightness when the watch is in “wrist down” mode. Again, a fairly small change but it makes the always-on display more readable if you’re just glancing down to check the time.

Finally, there’s a completely new colour – green – while some of the other hues have been tweaked. The existing blue and red tones are a tiny bit different, the silver option has been replaced with “Starlight” (a very light gold), and “Space Grey” has gone in favour of “Midnight”, which is more of a matte black than dark grey.

The green 45mm Apple Watch I was sent for review is very dark, to the point at which you’d have to be told it was green if you hadn’t seen it in just the right light. I’d have liked it to be a tiny bit lighter in tone, if nothing else to differentiate it a bit more from the midnight model.

Disappointingly, Apple hasn’t done anything to improve battery life. It’s still quoted at 18 hours with the screen in always-on display mode and, in my experience, that’s pretty much spot on. If you disable always-on display you can stretch it out to nearly two days, although I found that using the watch to track a run would cut it down to a smidge over 24 hours.

You do, however, get faster charging with the Apple Watch Series 7, thanks to a redesigned USB-C charging plate. The improvement, Apple says, is 33%, so where the Series 6 might take as long as an hour and half to charge from zero to full, the Series 7 only takes an hour and it will charge from zero to 80% in around 45 minutes. (If you use an Apple Watch charger from an older watch, however, the Series 7 will still charge but at the slower rate.)

In my experience so far, Apple’s claims have proved pretty accurate and it does make a difference, especially if you’re using the watch for sleep tracking. Pop it on the charger after waking up and you’re far more likely to reach 100% by the time you’ve finished making and eating breakfast and are ready to leave the house than with the Series 6.

It’s also good to see that the Apple Watch’s GPS and heart rate monitor are both as accurate as ever. I compared the GPS traces to those produced by a Garmin Enduro and the Apple Watch Series 7 performed exceptionally well, producing smooth traces that rarely cut corners or wandered significantly off track.

Distance and pace accuracy couldn’t quite match that of my Stryd foot pod but, then, I’ve found no GPS device that can, especially under heavy tree cover and the Apple Watch was as close as the best GPS fitness watches I’ve tested in this regard.

The same goes for heart rate monitor accuracy. In general, I’ve found it to be very reliable, and whenever I checked it during workouts, it was within a few beats per minute of the chest belt I was wearing for comparison. Averages, maximums and minimums all matched up well, too. It suffers with the same issues that all optical, wrist-worn monitors do, though: there is a little lag in the readings compared with a chest belt, which can make exercising to a set heart rate zone during interval sessions a challenge; and on cold days it can take a while to latch on to your heart rate at the beginning of a run. That said, it’s not quite as bad as some, though, and never locks on to your running cadence instead of your heart rate.

Apple Watch Series 7 review: What else is new?

Not much else has changed, truth be told, although there is a small selection of software-based features that come along with Watch OS8 and that are exclusive to the Watch Series 7. The first is the aforementioned QWERTY keyboard. The second is a couple of new watchfaces, including the rather dapper Contour, which puts the watch numbers right out on the edge of the screen so you can catch a glimpse through the refractive edge. 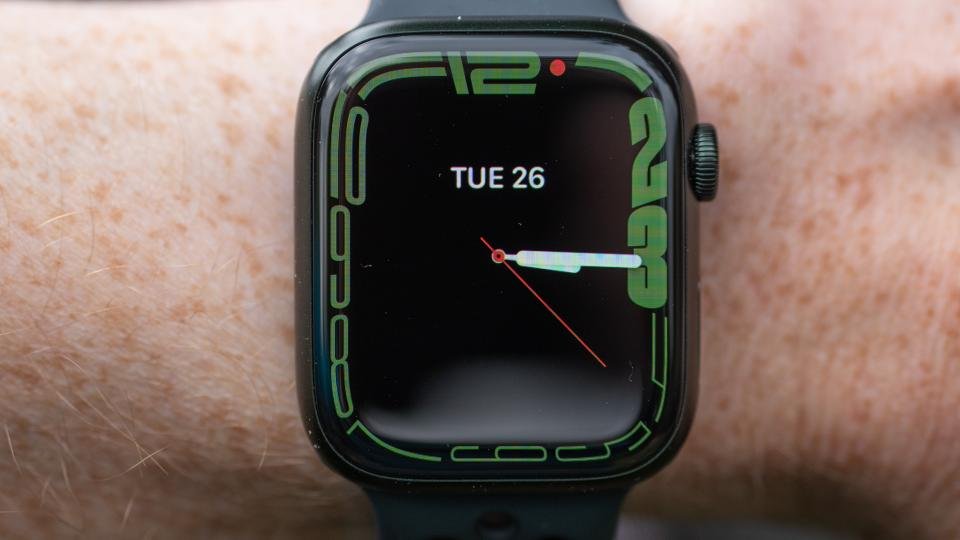 There are, of course, plenty of other new features in WatchOS 8 that aren’t exclusive to the Series 7, but are worth a mention. On the fitness side of things, for instance, the Apple Watch’s automatic workout detection has been extended to take in cycling – if you forget to start a workout, the watch will ask if you want to do that after around three minutes of pedalling.

Staying on the cycling theme, there’s also now auto pause and resume for cycling workouts and the Apple Watch Series 7 can also detect if you’re riding an e-bike instead of a regular bike, and adjust your calorie burn numbers accordingly. There’s also fall detection for more activities, including cycling, although I didn’t fancy putting that to the test.

Finally, and not before time, you now have the ability to set multiple countdown timers (and name them). Now, how about a similar update for the iPhone, Apple?

READ NEXT: Our guide to the best smartwatches money can buy

The Apple Watch Series 7 is a very good smartwatch. In fact, it’s the best smartwatch you can buy. It does everything the Series 6 did only slightly better, with a larger screen, a sleeker look, better durability and faster charging. I’m not happy that Apple hasn’t upgraded the battery life at all but it seems, until something drastic happens, that Apple Watch users are stuck with one to two days between charges.

If you can live with that, then the Apple Watch Series 7 replaces the Series 6 as the de facto best smartwatch money can buy. You probably shouldn’t splash out if your Series 6 or Series 5 is still going strong but if you’re buying your first smartwatch as an iPhone user or your current Apple Watch is showing signs of wear and tear, then it’s pretty much a no brainer.