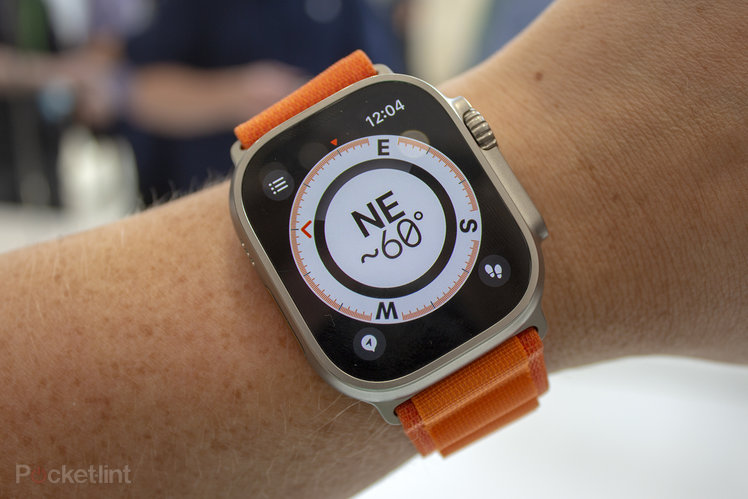 Apple has announced three new smartwatches and while two are upgrades to devices we’ve seen before, the third is the new kid on the block.

The Apple Watch Ultra is a pitched as a smartwatch for extreme sports enthusiasts and its rugged casing and tougher shell moves it into Garmin’s territory.

Does it have the minerals to compete though and what’s it actually like? Here are our first impressions.

The Apple Watch Ultra borrows from the tried and tested Apple Watch design that hasn’t really changed much since its initial launch in 2015. Sure, the display space has expanded within the footprint available and new sensors have been added, but the rectangular shape with curved edges and rounded corners remains. 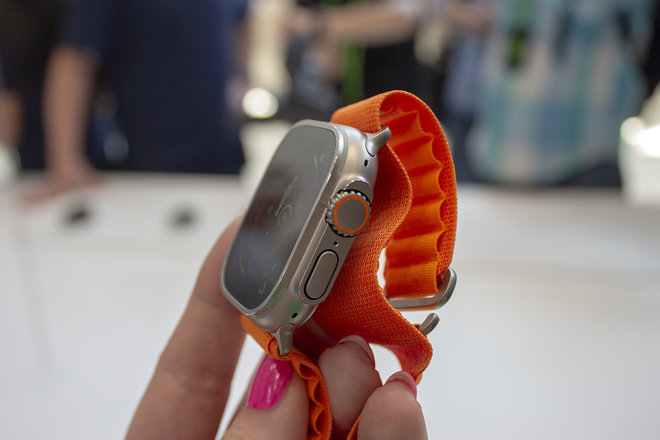 That design is super-sized on the Apple Watch Ultra though. It is tougher, bulkier and bigger. The casing moves from aluminium and stainless steel – both of which the Series 8 is offered in – to titanium like the older Apple Watch Edition. Titanium is said to be more resistant to scratches and drops, which should in theory make the Apple Watch Ultra more suitable for the rough terrain environments it’s pitched towards.

The bulkier 49mm casing has rounded edges with an extra section at the top leading into the display, which is completely flat, rather than rounded like the Series 8. The Ultra’s casing is intentionally not as streamlined as the Series 8, with a bit more about it. The Digital Crown has an extra layer, with more ridges for a more tactile approach and the ability to use it with gloves. 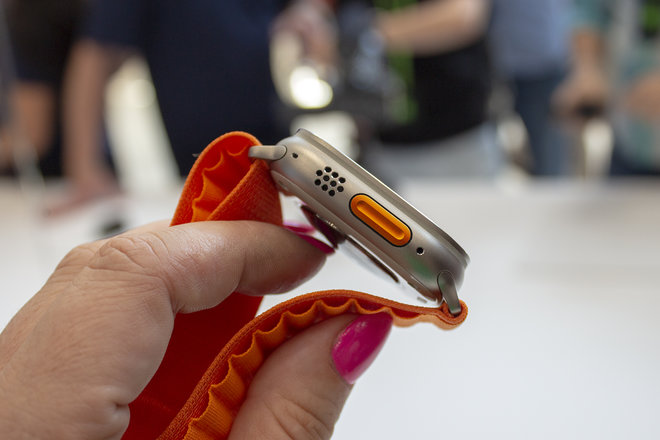 There’s also an added customisable button on the left edge, which is bright orange and can be used to start a workout, a new dive, or a new segment, for example. If you press and hold it, it will also activate the built-in siren that is 86dB and designed to be heard 180-metres away. Alongside that orange Action button – as Apple calls it – are dual-speakers too, as well as the GPS antenna.

The button on the right edge beneath the Digital Crown remains a function button but it is larger and more prominent on the Watch Ultra than previous Watch models. There are also lugs at the top and bottom of the Watch Ultra, attaching the specially-designed straps – which are still interchangeable. There are three new options – Alpine Loop, Trail Loop and Ocean Band. 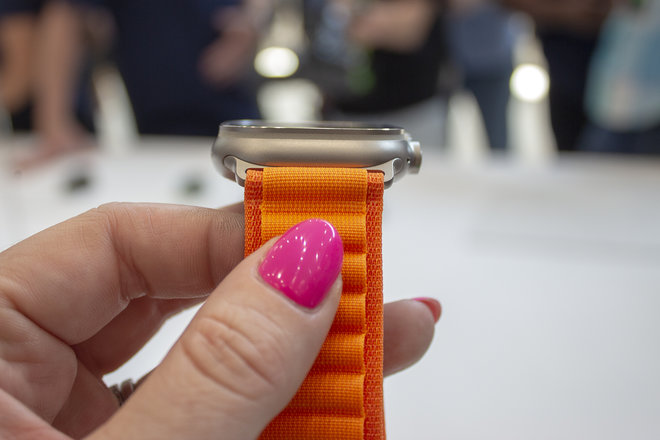 The large size of the Watch Ultra does mean that it is not going to suit dainty wrists quite as well as the smaller Watch Series 8, but this all depends on the look you’re going for, as well as what you want from your smartwatch. It’s very comfortable to wear, suprisingly so in fact, and the large format didn’t look awful on our small wrists either. It’s certainly a statement and this is a watch that isn’t going to go unnoticed – but we really liked the flat display and the chunkiness of this device.

The Apple Watch Ultra is water resistant to 100 metres, and it is also IP6X rated, offers a MIL-STD-810H rating, and it is EN13319 rated, which is the dive computer standard. That all means the Watch Ultra is suitable for most conditions.

The Apple Watch Ultra has the largest display of the Apple Watch models offered and it is the brightest too at 2000nits – the same as the iPhone 14 Pro. Protected by Sapphire Crystal – and flat as we mentioned – the Ultra’s display is designed to be able to withstand scratches and edge impacts. How well it does this will need our full review to decide though. 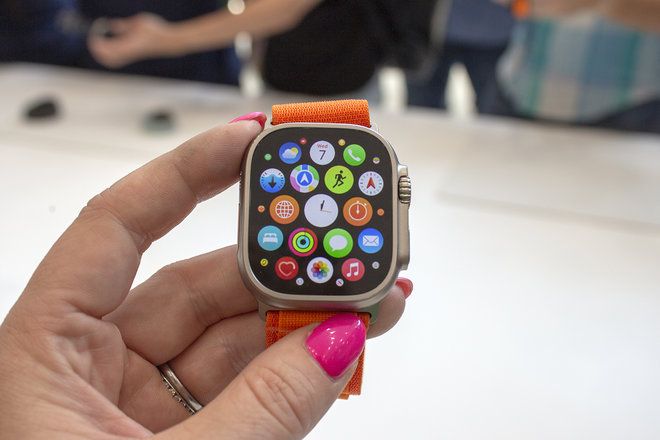 It’s an Always On Display too, like the Series 8, meaning you’ll always be able to see information on the screen, such as the time or your Activity Rings for example. There’s also a Night Mode function when you rotate the Digital Crown upwards when on the Wayfinder technical face, turning the details of the face to a bright red. The Wayfinder face offers up to eight complications and it features a time dial that can be switched to a live compass.

The borders around the display on the Watch Ultra are super slim too, offering plenty of screen real estate within the footprint. It’s a Retina display with a resolution of 502 x 410 pixels and based on our experience so far, it’s a bright and punchy screen with vibrant colour and deep blacks. 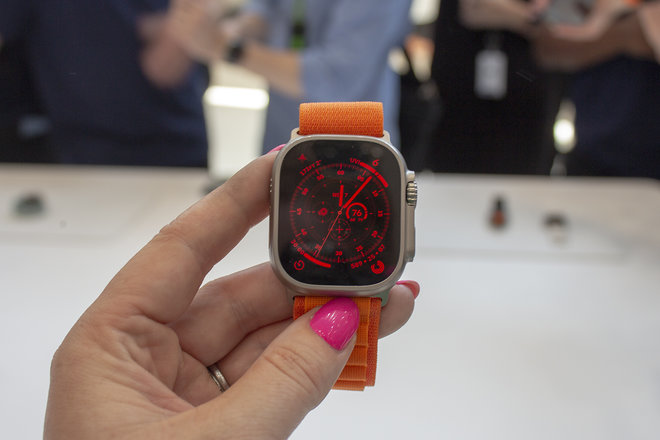 There also appears to be ample brightness, though this is something we will need to test in outdoor conditions when the sun is shining at its brightest to ensure you will still be able to see everything you need to no matter what you’re doing, whether climbing a mountain or surfing.

The Apple Watch Ultra runs on the S8 chip, which is a 64-bit dual-core processor, and there is a W3 wireless chip and U1 ultra-wide band chip on board too, like the Apple Watch Series 8. It also features the same plethora of sensors like the Series 8, including the usuals like an optical heart rate sensor, blood oxygen sensor, accelerometer, gyroscope and altimeter. 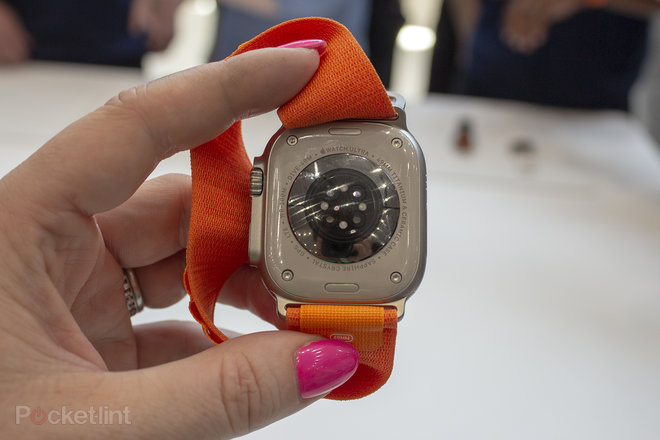 The accelerometer has been upgraded since the Series 7, offering up to 256g-forces instead of 32g-forces, and there is a body temperature sensor too. The body temperature sensor will aid the Watch Ultra – and the Series 8 – in detecting when a woman ovulates. This feature will likely be more useful in the Watch Series 8 though as the Watch Ultra may not be a device you want to sleep with, much like the Garmin Fenix 6 isn’t.

Alongside being able to take an ECG, track blood oxygen, track a multitude of sports, receive smartphone notifications and use various apps, the Watch Ultra will also detect if you’ve been in a car crash, calling and sending your location to the emergency services and notifying your emergency contacts. It also has international roaming.

There’s also a compass on board – as you would expect, a depth gauge, precision dual-frequency GPS that uses L1 and L5 GOS for more precise metrics and there’s a built-in siren too, as we mentioned. It is also LTE, with no GPS-only model available, as there is with the Series 8 and it has an operating temperature between -20-degrees celcius to 55-degrees celcius. 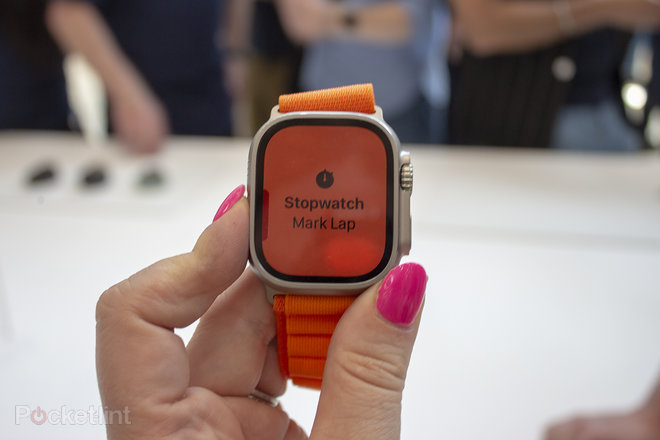 Of course, as we were in the Steve Jobs Theater when we got our hands on the Watch Ultra and not at the top of Mount Everest, we weren’t able to test most of the features. We will put it through the toughest paces we can find during our review though.

The Apple Watch Ultra has a larger battery than the Series 8 – or any other previous Apple Watch, with claims of a 36-hour life compared to the 18-hours offered by the standard model. This is still a far cry from the Garmin Fenix’s of the rugged smartwatch world, but substantially better than the Apple Watch has offered in the past.

There’s also a 60-hour promise when used in a certain mode, though this is coming later this year. 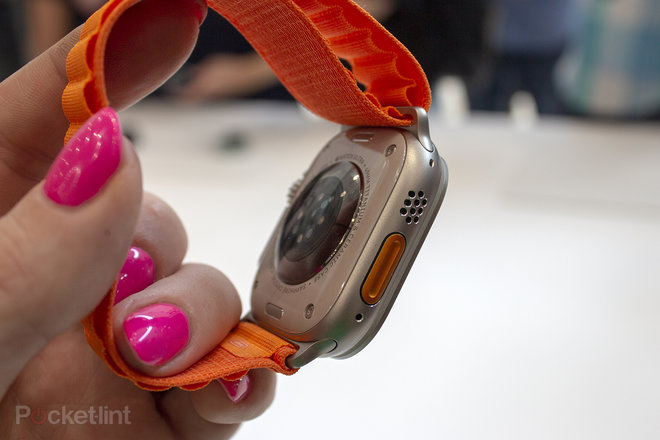 Of course, we couldn’t test the battery claims in our brief time with the Watch Ultra and this is an area we will put plenty of focus on when we come to review it but we’re looking forward to not having to charge our Watch every night, and it will be especially useful when doing long runs or hikes and utilising the GPS and other features.

The Apple Watch Ultra runs on watchOS 9, which brings with it a host of features, including more advanced sleep tracking with sleep stages. Like iOS 16, there has been a public beta for watchOS 9 available since July so if you already have an Apple Watch, you may have already downloaded it and tried it out, meaning the Watch Ultra will offer a similar user experience.

There are a couple of extras with the Watch Ultra though, including the ability to programme the orange Action button. It means you can choose to get that button to start a workout for example, which stops you having to swipe the screen – much handier when you have wet hands or it is raining. There are also plenty of other uses, as we mentioned. 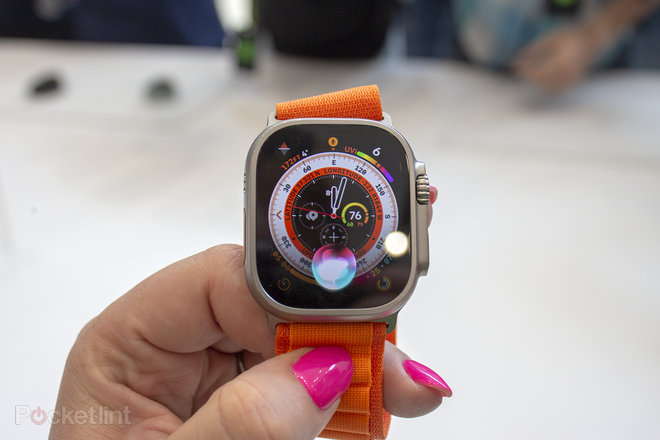 The watchOS 9 software build is of course not exclusive to the Watch Ultra either, nor the standard Watch Series 8 so you don’t necessarily need the new devices to try the new features but there are some that are exclusive to the Watch Ultra, like the programmable button and some of the extreme sports apps and features. You can read all about watchOS 9 in our separate feature.