Intel introduced the Willow Cove micro-architecture with their Tiger Lake processors in the second half of 2020. These were designed to span a wide range of performance levels and applications, with TDPs ranging from as low as 7W up to 65W.

While mobile systems are the prime market for the 7W – 15W SKUs, higher TDP processors have found themselves in a number of different form-factors ranging from notebooks and UCFF mini-PCs to full-blown gaming desktops. Many ultra-compact mini-PCs based on Tiger Lake have been introduced by different vendors in the last few quarters, but challenges in the global semiconductor supply chain have resulted in scarce supply. ASRock Industrial was one of the first to announce a ‘NUC’ based on Tiger Lake – the 1100 BOX series. Introduced in October 2020, it started appearing in the channel in early 2021.

We have already seen the capabilities of Tiger Lake in a gaming desktop (Beast Canyon NUC). In that system, Tiger Lake appeared in a 8C/16T 65W TDP avatar. Developments related to ultra-compact form-factor (UCFF) machines over the last decade have resulted in systems that are able to successfully handle 28W TDP processors, and that has become the de-facto standard for high-performance UCFF PCs. ASRock Industrial’s NUC 1100 BOX series has three SKUs, all of which are based on 28W TDP Tiger Lake-U processors. The flagship SKU is the NUC BOX-1165G7 based on the Intel Core i7-1165G7.

Competitively speaking, the Tiger Lake UCFF PCs come in at a time when systems based on AMD’s compelling 7nm Zen 2-based Ryzen 4000U series of processors are already well-established in the market. Advancements in power efficiency and performance per watt, along with a slew of platform updates had enabled Zen 2-based mini-PCs to present a credible challenge to Comet Lake-based systems in terms of value proposition. Can Tiger Lake shift the metric back towards Intel? This review takes a look at the features and capabilities of the NUC BOX-1165G7, with some commentary on what Tiger Lake brings to the table for machines in this form-factor.

ASRock is a well-known vendor in the consumer PC market. In 2011, the company set up the ASRock Industrial business unit to focus on industrial motherboards. The division branched out in 2018 as an independent vendor with exclusive focus on B2B products. The company has products for deployment in small businesses (offices), automation, robotics, security, and other industrial / IoT applications.

Primarily, the company develops motherboards, and sells them to various system integrators who can do their own value additions. For example, OnLogic’s ML100G-40 is based on ASRock Industrial’s 4X4-V1000M AMD Ryzen Embedded motherboard. As we saw in our review of the ASRock Industrial 4X4 BOX-V1000M and the 4X4 BOX-4800U, the company also sells mini-PCs based on the developed motherboards into the retail channel. The motherboard enclosure bears a strong resemblance to ASRock’s Beebox series. ASRock has not updated the Beebox since the introduction of Kaby Lake, possibly not wanting to step into ASRock Industrial’s BOX series of UCFF PCs.

ASRock Industrial has two distinct actively-cooled UCFF PC lineups – the NUC BOX series based on Intel’s processors, and the 4X4 BOX series based on AMD Ryzen. Using processors configured with TDPs up to 28W, these clones of the Intel’s mainstream NUCs service a wide range of applications. The NUC 1100 series of Tiger Lake-U motherboards comes in three different versions, as we outlined in our coverage of the introduction of the lineup last year.

The NUC-1165G7 places the 4.09″ x 4.02″ motherboard inside a chassis measuring 110 mm x 117.5 mm x 47.85 mm. The height allows ASRock Industrial to integrate support for a 2.5″ SATA drive, should the end user require installation of one. With its B2B focus, and need for the system to service embedded and industrial applications, the company also integrates a watchdog timer and hardware TPM (from Infineon) on the motherboard. The soldered processor (Intel Core i7-1165G7) has four cores with hyperthreading enabled. It can operate with a TDP configurable between 12W and 28W, with ASRock Industrial setting it to 28W in the NUC BOX-1165G7. 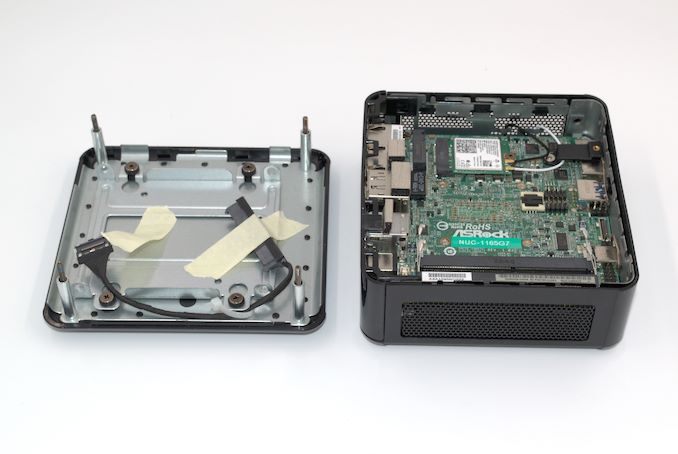 Our review sample was barebones, similar to the system currently being sold in the channel. We configured it with 64GB of Kingston’s HyperX Impact DD4 SODIMMs (now, Kingston Fury) and ADATA’s entry-level low-power PCIe 4.0 SSD – the XPG GAMMIX S50 Lite. 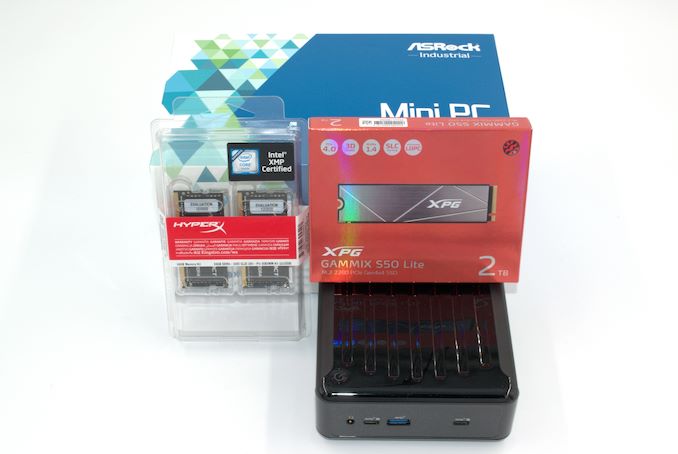 The specifications of our ASRock Industrial NUC BOX-1165G7 review configuration are summarized in the table below.

The ASRock NUC BOX-1165G7 kit doesn’t come with any pre-installed OS. Necessary drivers can be downloaded off ASRock Industrial’s product support page. In addition to the main unit, the other components of the package include a 90 W (19V @ 4.7A) adapter, a US power cord, a VESA mount (along with the necessary screws), two M.2 screws, and a quick-start guide. 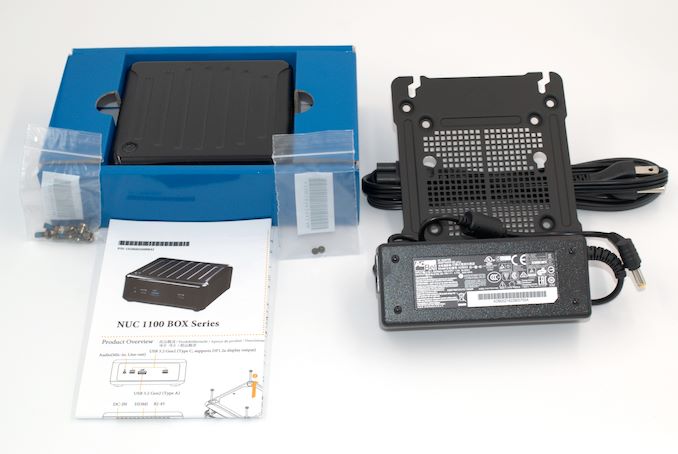 The various chassis features and internal motherboard layout can be gleaned from the two galleries below.