ASUS today announced new motherboards featuring the latest AMD®B550 chipset that brings the potential of PCIExpress® 4.0 to mainstream builds everywhere. AMD B550 motherboards enable 20 general-purpose PCIe®4.0 lanes from 3rdGen AMD Ryzen™ desktop processors. The primary PCIe slot on all new ASUS B550 boards offers 16 lanes of PCIe 4.0 connectivity, and 3rdGen AMD Ryzen™ parts feature as many as four USB 3.2 Gen 2 ports running at up to 10Gbps direct from the CPU itself.

ASUS also has exciting features to enhance its B550 motherboards like WiFi 6, 2.5GbpsEthernet,robust power delivery, increased DRAM speed, BIOS Flashback™and support for AI-powered, noise-cancellingmicrophone technology. The new AI noise-cancelling technology works by applying advanced filters to ensure background noise is cleanly filtered out. The B550 chip itself gets an upgrade to PCIe 3.0 for its built-in lanes. These upgrades make B550 a tantalising platform for mainstream builders throughout the world. ASUS engineers and designers have produced a grand total of 11 B550 motherboards across three families. ROG Strix boards fill out the top end with innovative features like efficient and cool-running VRMs, enhanced audio, and 2.5 Gbps Ethernet and WiFi 6 connectivity by way of Intel controllers. TUF Gaming boards blend high-end features with a battle-tested, reliable and attainable package, while the Prime series rolls up all the features needed for all-around builds. For further details about the complete ASUS B550 lineup

“We are seeing increasing user demands for flexible systems that perform well in a multitude of tasks from gaming to content creation more than ever before,” said Chris Kilburn, Corporate Vice President and General Manager, Client Component Business Unit, AMD. “AMD is excited to bring the power of 3rd Gen AMD Ryzen desktop processors and cutting-edge PCIe 4.0 support to the mainstream users with our latest AMD B550 chipset. From ROG Strix to ASUS Prime and everything in-between from our partners at ASUS, AMD is confident these new B550 platforms will provide flexibility and power never seen before on a mainstream platform.”

ROG Strix B550-E Gaming
ASUS builtROG Strix B550-E Gaming with an eye towards AMD’s high-performance processors and dual or tripleexpansion card setups. The AM4 socket is flanked by a 14+2 power stage VRM for reliable performance under sustained loads from many-core CPUs, while reinforced PCIe x16 SafeSlots support multi-GPU action in two-way SLI™or three-way CrossFireX™setups for gamers and creators alike.Strix B550-EGaming’s six fan headers and dedicated AiO and pump headers allow for setups as simple or intricate as a given build requires. Q-Fan software controls with automatic fan-speed detection and multiple presets make it easy to keep both temperatures and noise levels down. Dual M.2 slots can take in SSDs up to 110mm long, both covered by heatsinks to prevent thermal throttling under intense I/O loads. Strix B550-E Gaming also features an Intel-powered 2.5 GbpsEthernet and WiFi 6 controllers, Bluetooth 5.1 support is on tap for wireless headsets, phones and tablets. 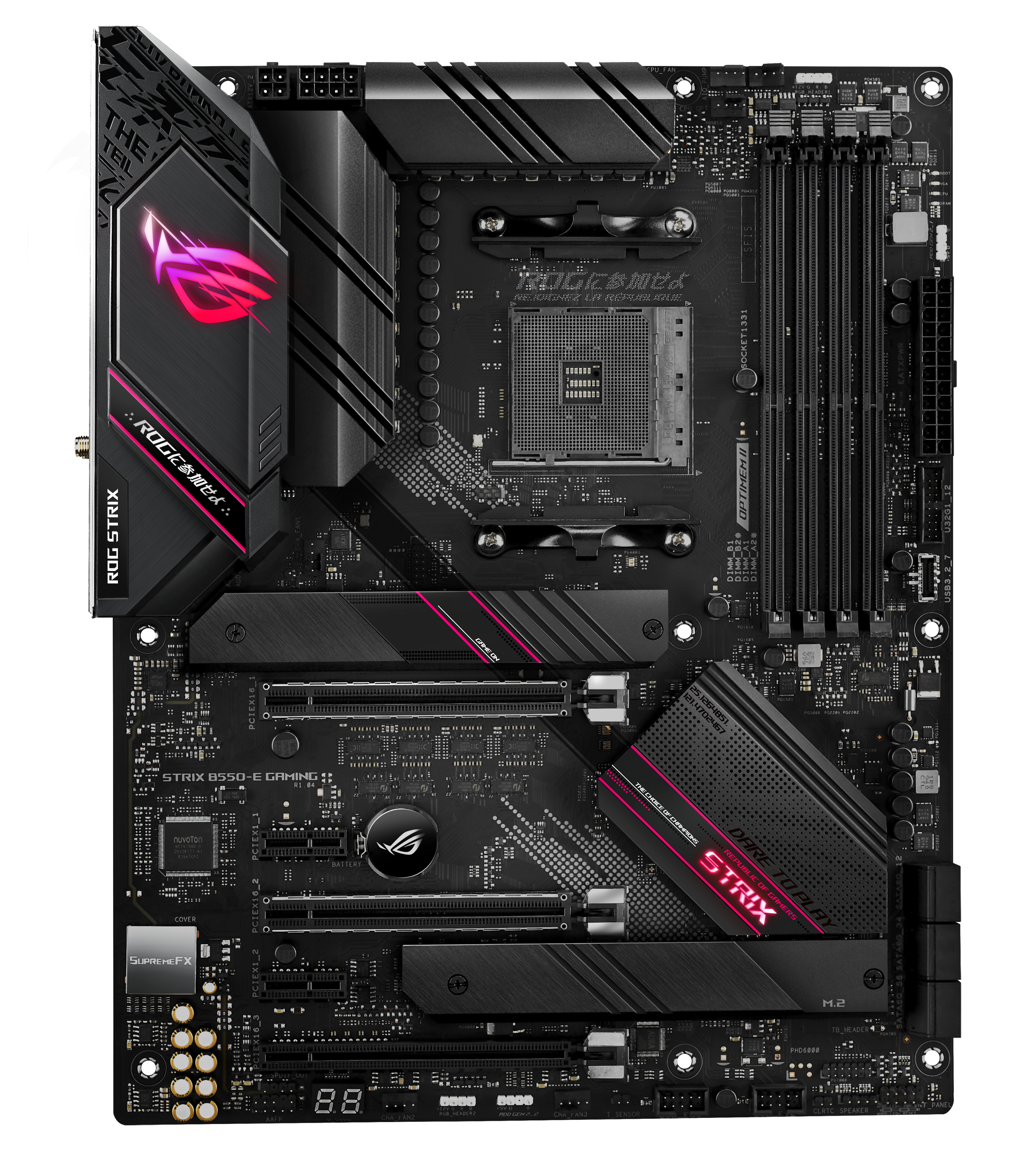 USB connectivity is particularly plentiful on Strix B550-E: it includes three USB 3.2 Gen 2 connectors (one Type-C and two Type-A), along with a smattering of USB 3.2 Gen 1 and USB 2.0 ports. ASUS has included a USB 3.2 Gen 2 front-panel connector for the latest crop of cases. The high-end SupremeFX S1220A audio chip comes with a handy companion in the form of a USB-C Audio port for auto-detection of the device signal type, so the port can be used for both Type-C audio devices and standard USB connectivity as needed. A total of four RGBheaders are available–two standard headers and two Gen 2 addressable hook-ups with individual LED control, reduced latency and automatic configuration support. All those diodes can be turned off with one click to give the board a stealthy black-ops look. Additional touches include BIOS FlashBack for updating firmware without a CPU and FlexKey reset button remapping.

ROG Strix B550-F Gaming (Wi-Fi)
ROG Strix B550-F Gaming (Wi-Fi) proves the point for builders who want a performance-oriented board with a healthy dose of luxury. The 12+2 power stage VRM is ready for top Ryzen chips, and 8+4-pin ProCool auxiliary power connectors with solid pins ensure steady and stable power delivery to those power stages.This model includes Intel I255-V 2.5 Gbps Ethernet connectivity and WiFi 6 support from an Intel AX200 adapter, while the pristine SupremeFX S1220A codec makes an encore for superior audio experiences. Strix B550-F Gaming (Wi-Fi) follows the distinctive visual standard of the ROG Strix family and looks plenty sharp on its own thanks to the eye-catching ROG eye logo and recessed cybertext patterning, and an integrated I/O shield. For customisation, a user can add plenty of lights with RGB LED strip headers in both regular and Gen 2 addressable flavors —all with Aura Sync support for easy configuration. 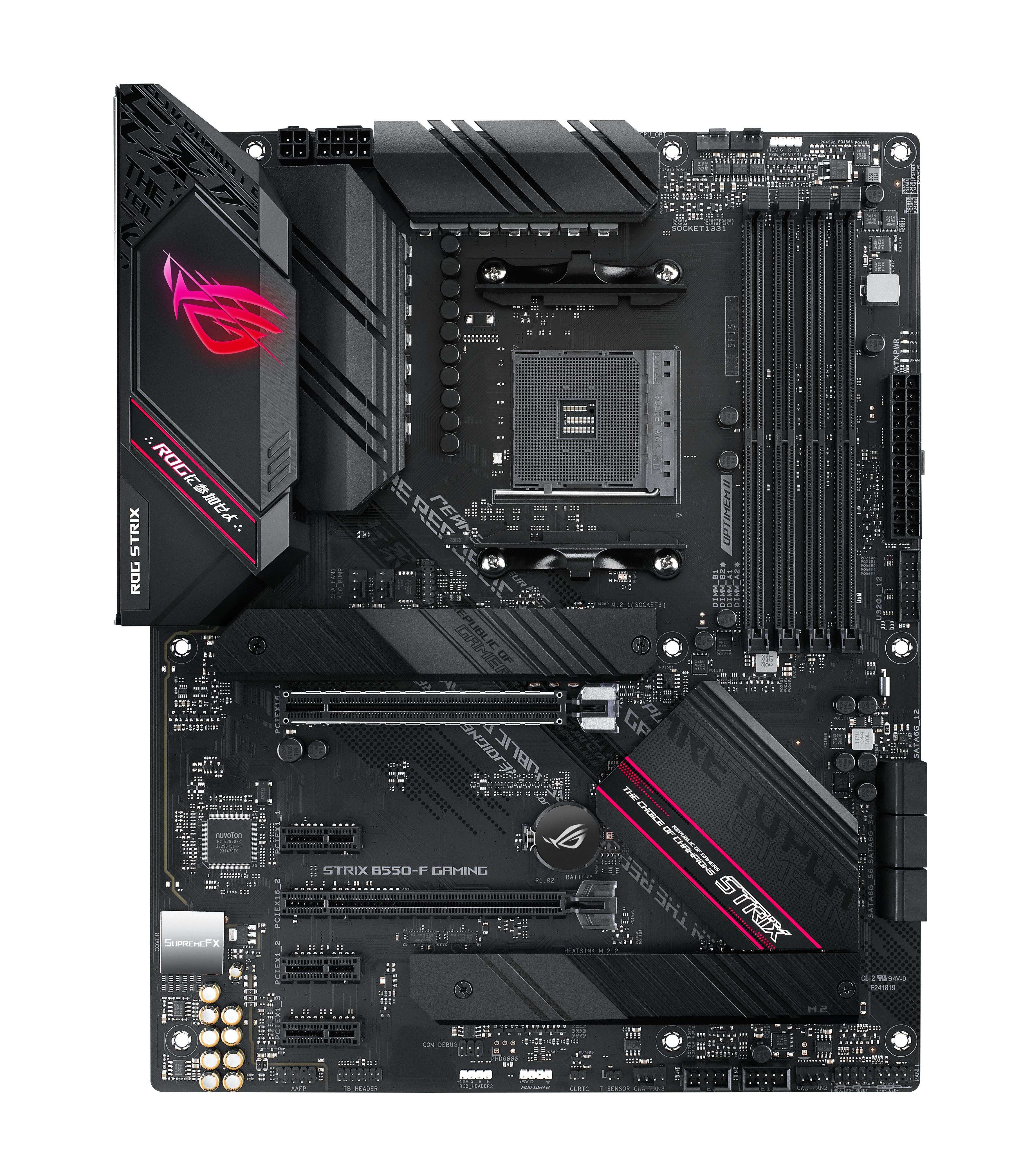 ROG Strix B550-I Gaming
ROG Strix B550-I Gaming is designed for small builds with big ambitions. By design, Mini-ITX makes room for a single PCIe 4.0 x16 slot, but the compact form factor has other advantages. Strix B550-I Gaming can drive compatible DIMMs at speeds up to 5100 MHz and beyond by taking advantage of the shorter trace length between the memory slots and the CPU. The 8+2 powerstageVRM is a fine fit for 3rdgen Ryzen chips. Active cooling on the VRM and an eight-pin connector with our ProCool II design ensures that power delivery remains stable in the tight confines of Mini-ITX enclosures.The preinstalled I/O panel is kitted out with USB 3.2 Gen 2 Type-C and Type-A ports, an Intel I225-V 2.5GbpsEthernet connector, and an Intel AX200 WiFi 6 and Bluetooth 5.1 adapter. Small machines are more likely to have fast external storage attached, so ASUS engineers added a front-panel USB 3.2 Gen 2 connector for the latest cases. The 3.5mm connectors are all LED lit in unique colours to allow for easy identification when connecting analoguespeakers, headsets or microphones. There’s a companion noise-filtered USB-C Audio port for corresponding microphones and headsets, too. 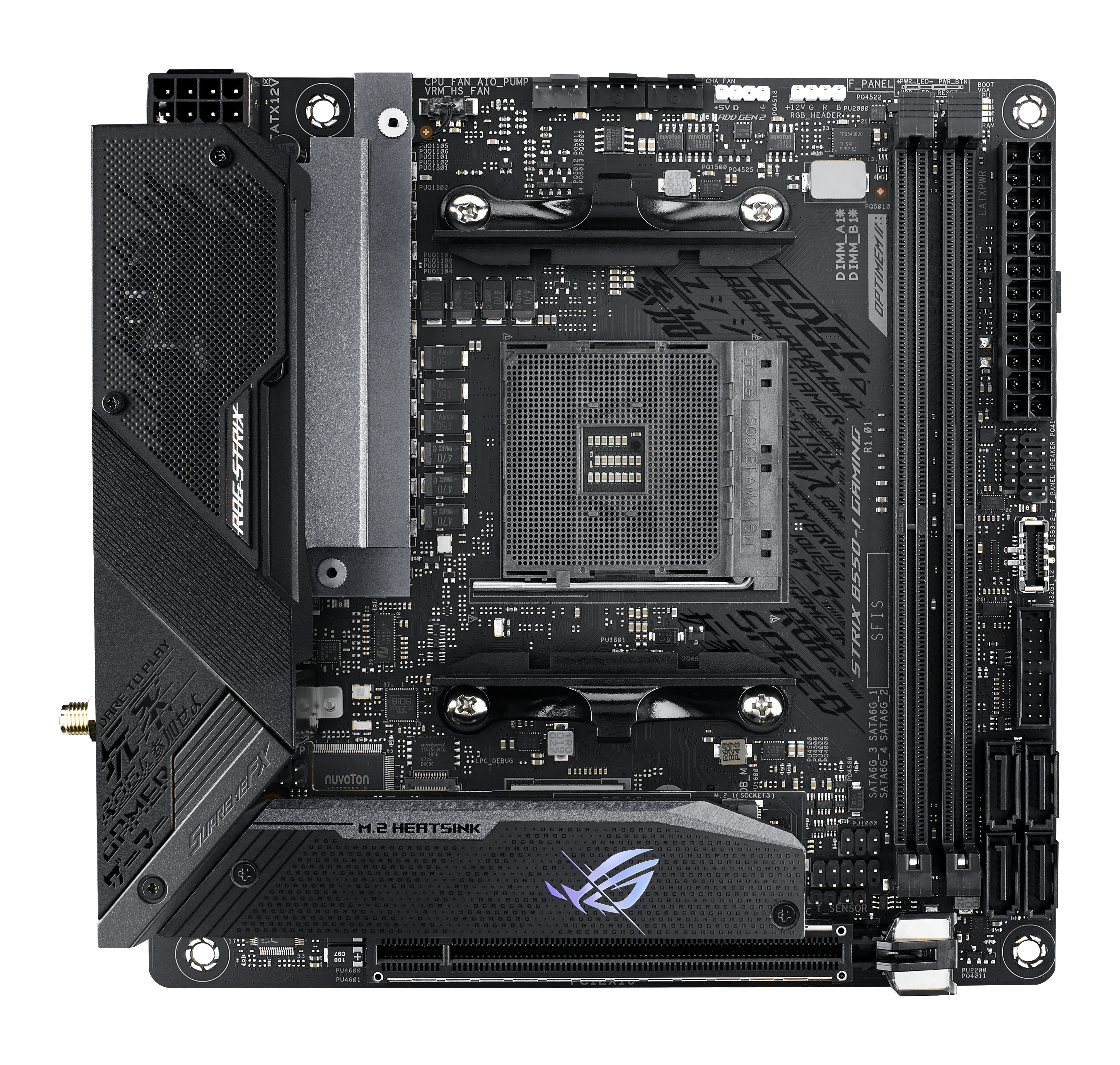 The two M.2 slots both accept devices as long as 110mm, while the duet of PCIe x16 slots supports CrossFireX configurations. The rear panel includes USB ports of every modern type, and that loadout can be further expanded with Thunderbolt 3 connectivity thanks to an onboard header. A BIOS FlashBack button rests near one of the ports for CPU-less UEFI upgrades.TUF Gaming B550-Pluscomes with 2.5 GbpsEthernet connectivity and there’s an M.2 E-key slot available for a WiFi 6 and Bluetooth 5.1 upgrade. The Realtek S1200A audio codec in this model is further enhanced by DTS Custom support for headset 3Dsurround-sound virtualisation, making movies and compatible games come alive with pinpoint-accurate positional audio.The gray-and-black TUF Gaming aesthetic and its yellow accents is distinctive on its own, but this colour palette also makes for a great canvas for additional lighting. A Gen 2 addressable RGB LED header and two standard headers can be wired to additionalstrips for easy visual customisation. 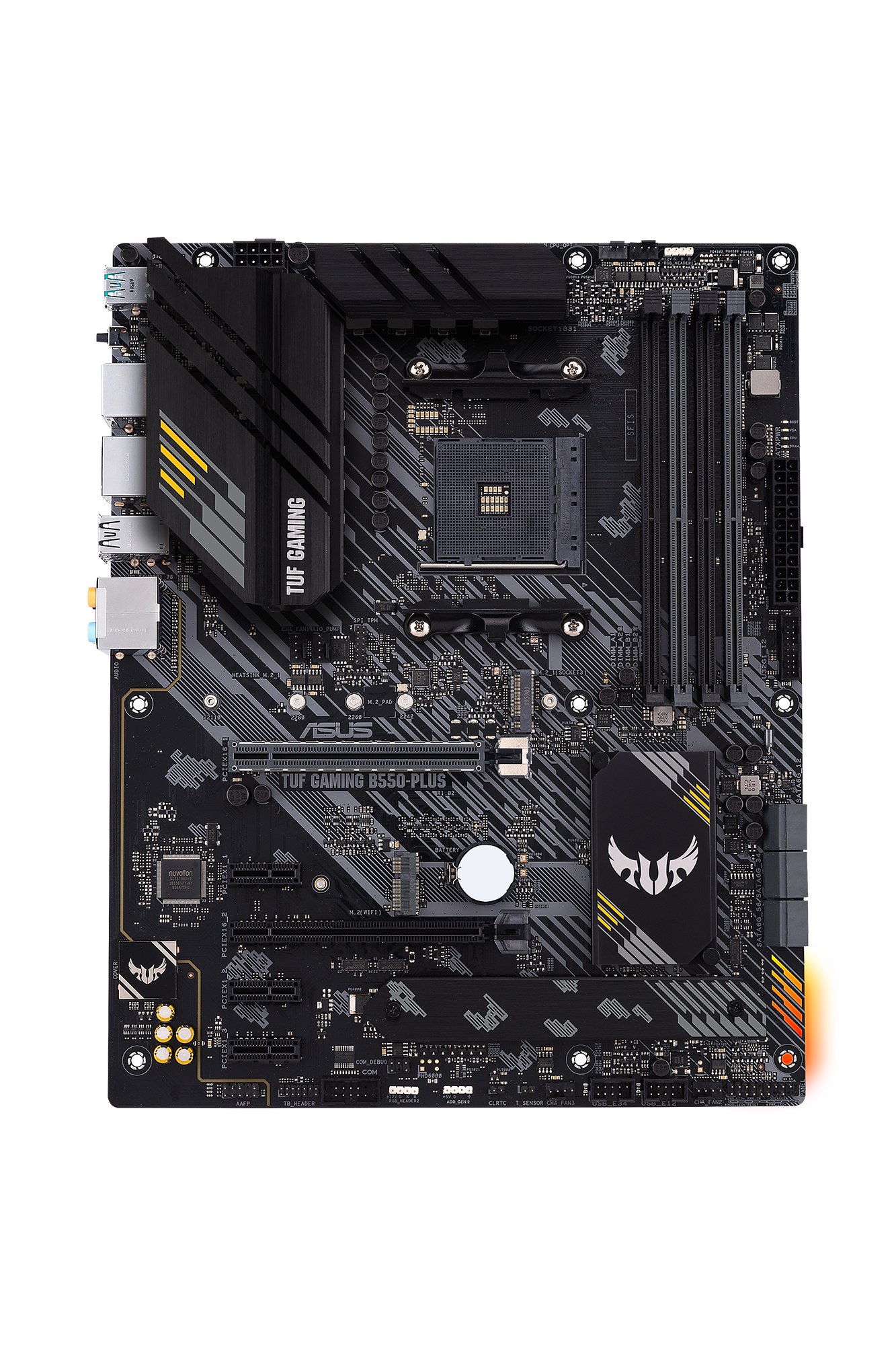 TUF Gaming B550M-Plus (Wi-Fi)
ASUS TUF Gaming B550M-Plus (Wi-Fi) takes many of the features of TUF Gaming B550-Plus and reconfigures them for the smaller microATX footprint. This board keeps the same pairs of PCIe x16 and M.2 slots as its ATX sibling. The main difference is that one of the M.2 slots takes in standard 80mm devices instead of longer 110mm units. In exchange, this model offers a more attractive price tag to go with its trimmed dimensions. TUF Gaming B550M-Plus comes in two variants: with or without an Intel AX200 WiFi 6 and Bluetooth 5.1 controller and antennas. No matter which is chosen, the user enjoys 2.5 GbpsEthernet connectivity, Realtek S1200A audio with DTS®Custom support, and a host of fan and RGB LED headers that includes Gen 2 addressable strip connectors. 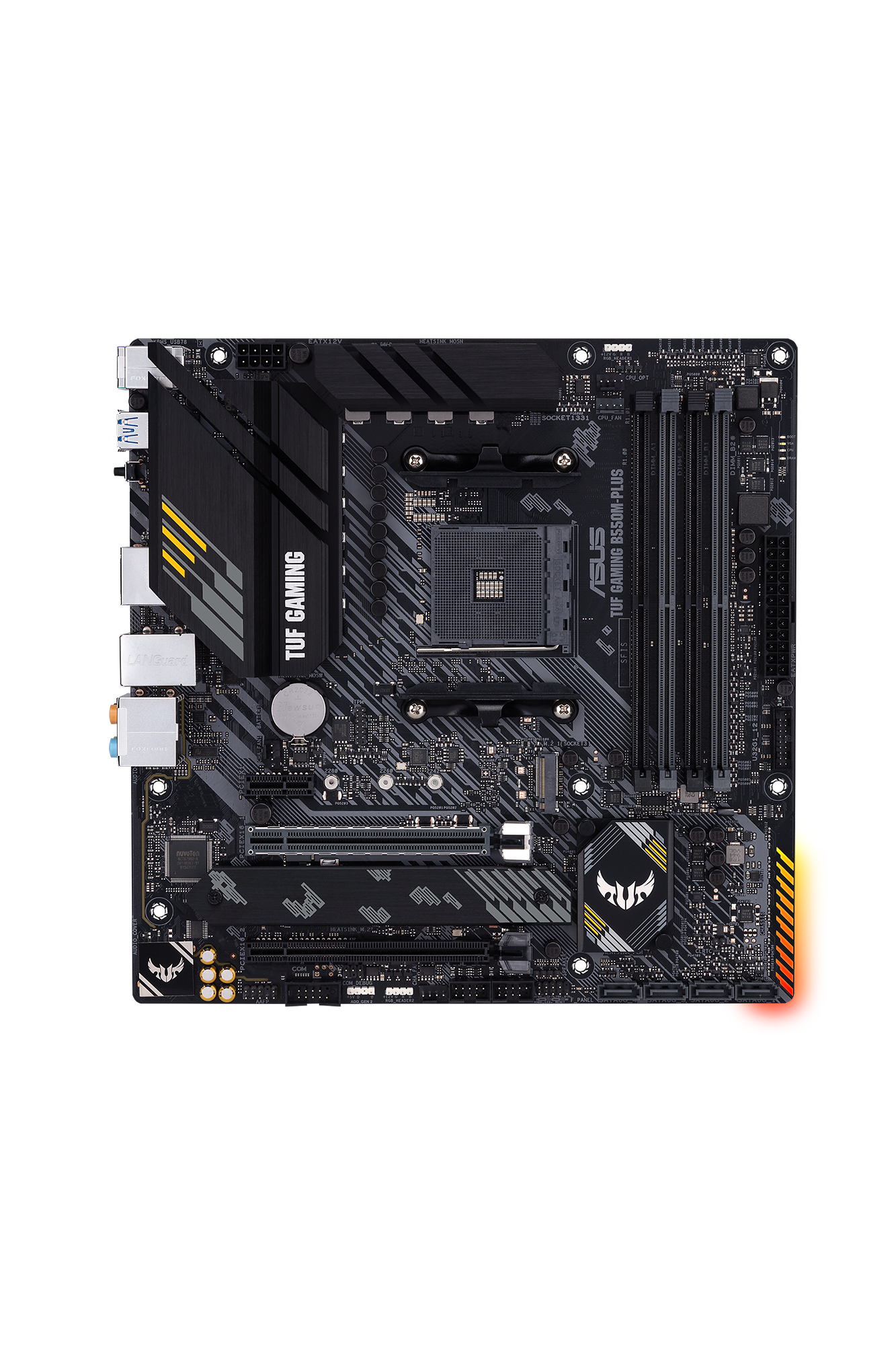 ASUS Prime B550-Plus
The top-of-the-line ASUS Prime B550-Plusmotherboard is ready to power a mid-range gaming rig or serve as a solid foundation for an AMD-powered productivity system. This model is right at home powering midrange Ryzen chips, and it comes fitted with heatsinks atop the VRM and chipset to ensure stability.

The dual PCIe x16 slots support CrossFireX if a user needs dual-GPU action for their system, while the duo of M.2 slots accepts 110 mm drives. If the USB 3.2 Gen 2 ports around back aren’t enough, the optional ASUS ThunderboltEX 3card can be hookedup to the provided header for even more peripheral bandwidth. The neutral palette exhibited by Prime B550-Plusis understated enough to fit into any build, but it’s also a fine canvas for deployment under coloured case lighting. 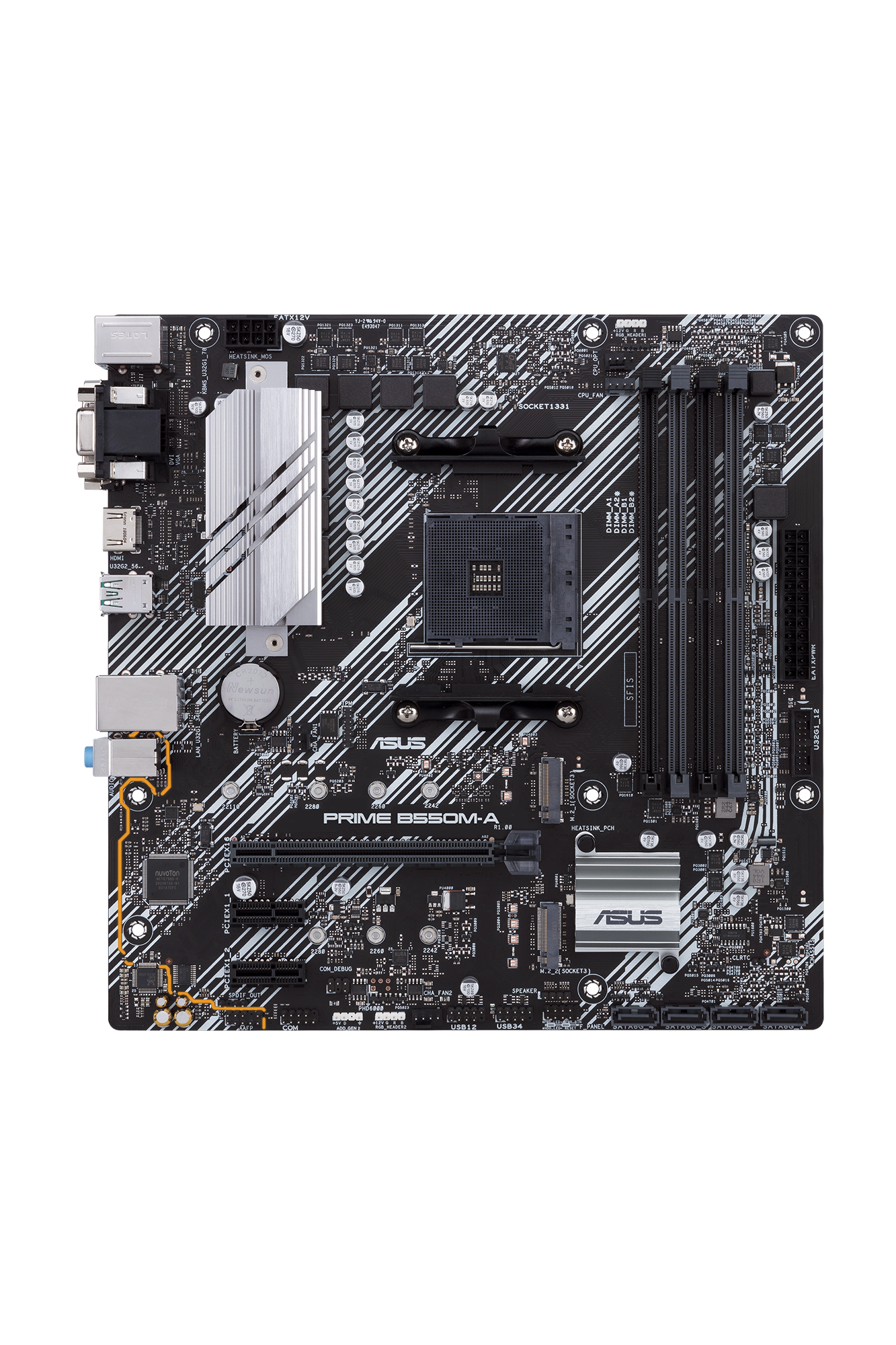 ASUSPrime B550M-A (Wi-Fi)
Space in offices and bedrooms is often at a premium, making ASUS Prime B550M-A (Wi-Fi) a better option to go into places where an ATX build might not. This variation on Prime B550-Plus offers nearly the same specs but uses the compact microATX form factor.Due to the WiFi 6 standard, this motherboard is now perfectly viable to use the airwaves in situations where users would previously need a cable. For that reason, ASUS offers Prime B550M-A with Gigabit Ethernet only or in a version with an Intel AX200 WiFi 6 and Bluetooth 5.1 adapter. 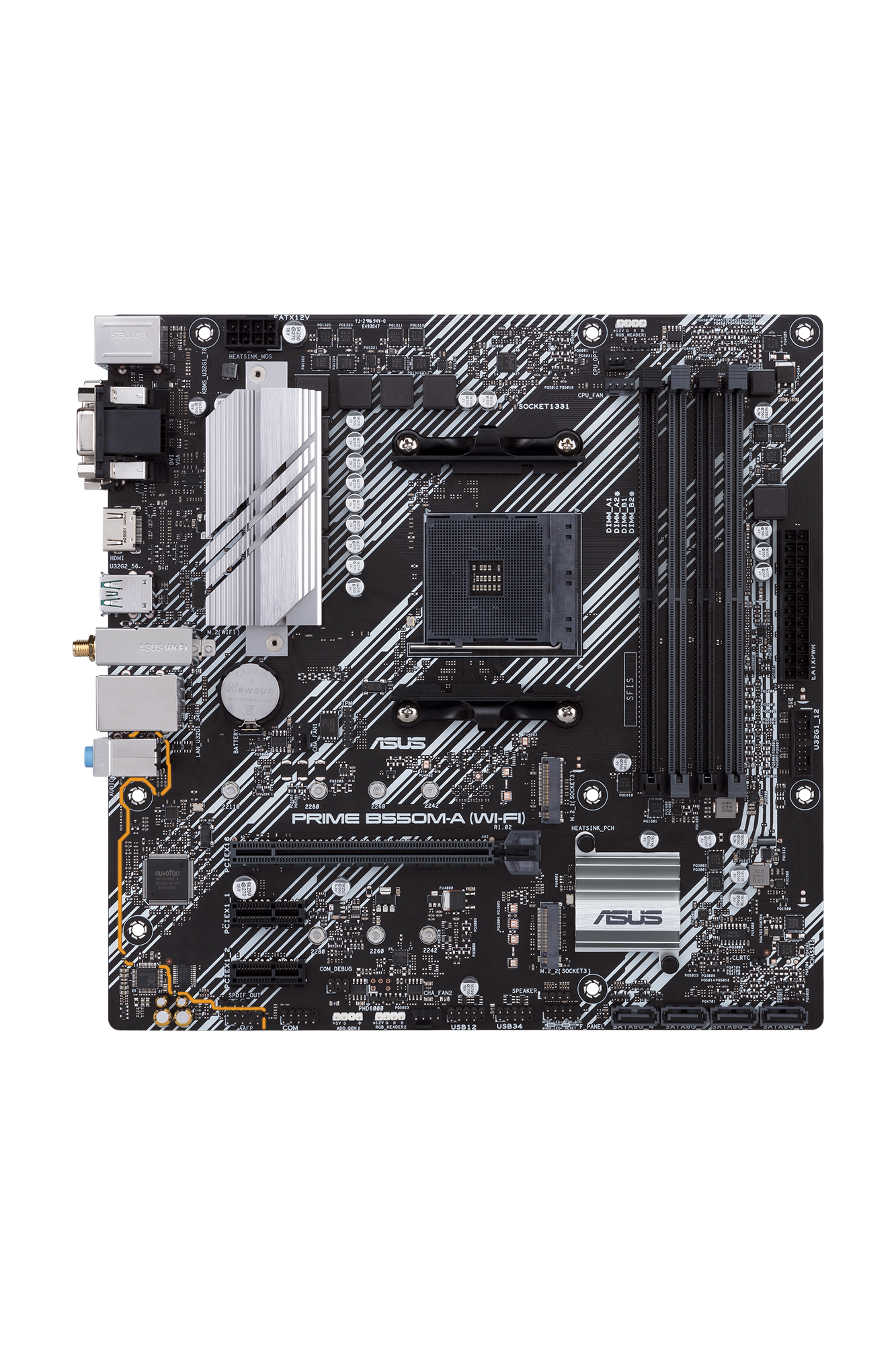 ASUS Prime B550M-K
A compact microATX form factor lets builders save on space without sacrificing expandability, and both the main PCIe x16 slot and M.2 slot are wired directly to the processor with latest-gen PCIe 4.0 connectivity for maximum bandwidth with next-gen devices.The board can take in two M.2 devices, one of them of the longer 110 mm variety. The rear I/O panel contains two USB3.2 Gen 2 ports along with four USB 3.2 Gen 1 connectors, ensuring that attached peripherals enjoy plenty of bandwidth. HDMI, DVI-D and D-sub ports give Prime B550M-Kplenty of versatility for processors with integrated graphics. 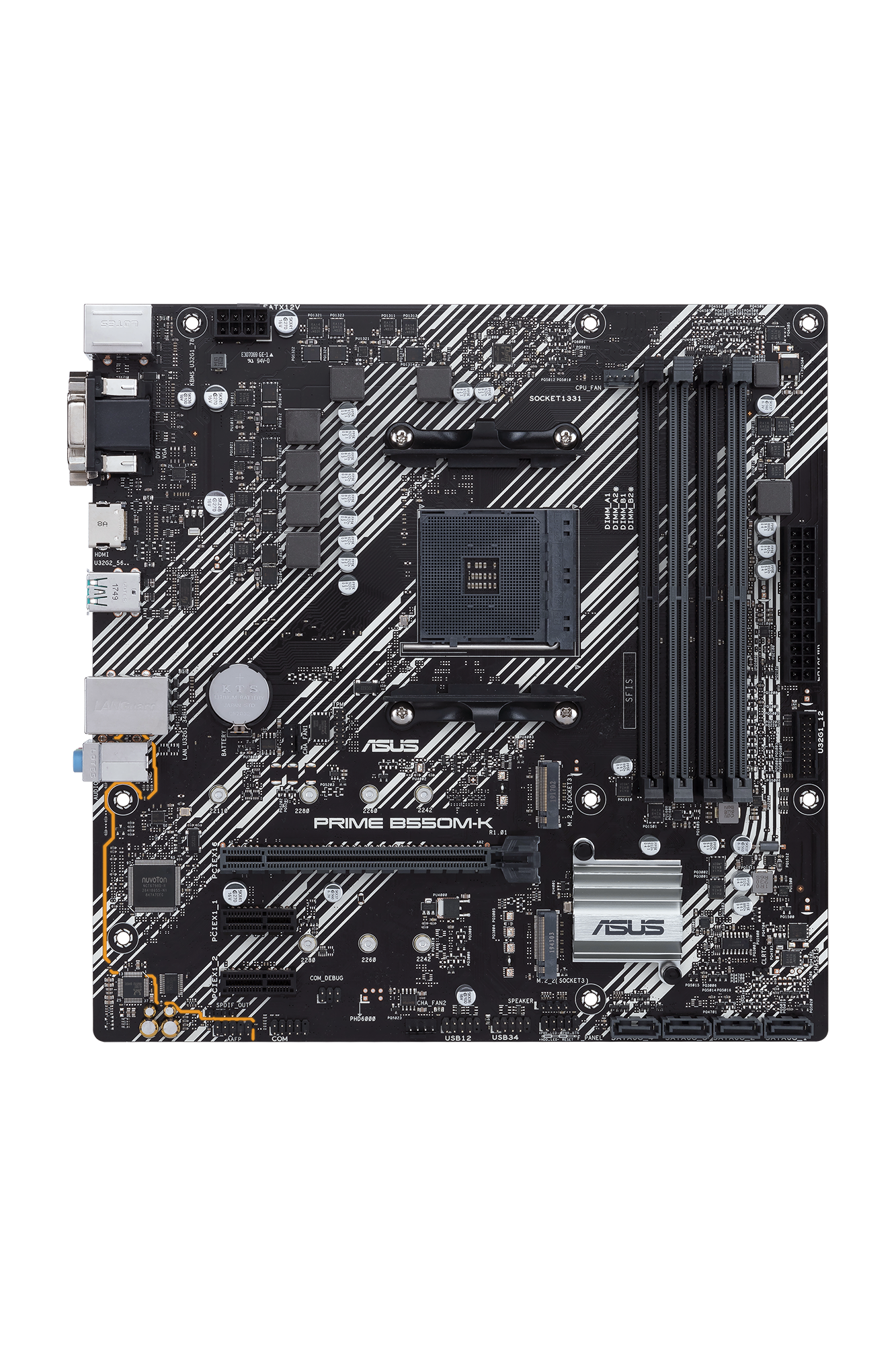