Back at the all-digital CES 2021 trade show, ASUS and the other big motherboard vendors announced its Z590 models designed for Intel’s LGA1200 processors. With many of the models now common knowledge, Twitter technology enthusiast @momomo_us points out that ASUS is bundling MemTest86 inside the BIOS of its Republic of Gamers motherboards.

MemTest86 is a well known piece of software for diagnosing memory failures, not just in faulty memory, but also provides troubleshooting capabilities for unstable memory overclocks. It is known that Intel’s Rocket Lake processors will have a stronger integrated memory controller (IMC) than its current Comet Lake counterparts, as we finally move up to DDR4-3200 native support. This is also prevalent in the available Z590 motherboard memory listings, with many boards including kits as fast as DDR4-5333 in its QVL lists for overclocked memory. 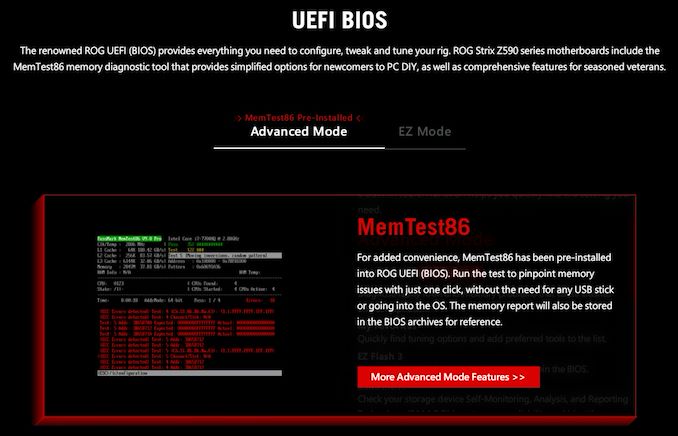 As per @momomo_US’s tweet, it looks as though ASUS has penned a deal with PassMark software to allow it to integrate MemTest86 directly into its UEFI firmware. This looks as though it will be only available on select Republic of Gamers models. MemTest86 is also available to all users, although without UEFI integration, users can download it onto a bootable USB flash drive and diagnose memory faults and unstable overclocks this way.

With Intel and AMD both making strides in its out of the box Turbo and Boost clock speeds, it seems ASUS is emphasizing memory performance. It uses its own ‘secret sauce’, which it calls Optimem. It is a primary feature on its motherboards, which ASUS states should allow for tighter memory latencies at equivalent voltages.

At present, it is not entirely clear exactly which Z590 models will be distributed with MemTest86 integrated into the UEFI firmware. As more Z590 models hit the retail shelves in the coming months, we should see a clearer picture.