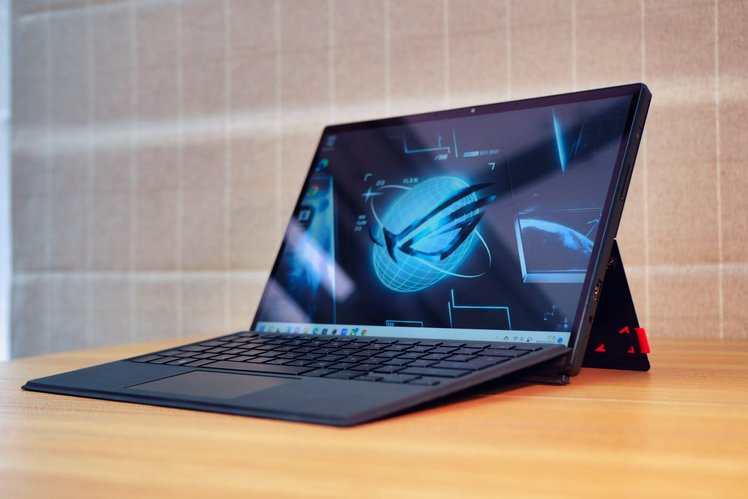 If you’re attracted to Microsoft’s sleek 2-in-1 Surface Pro devices but wished they could handle gaming a bit better, Asus has the product for you.

The Flow Z13 is a Windows tablet with some serious gaming chops and takes a lot of inspiration from the Surface form factor. A pull-out kickstand and a magnetic keyboard cover allow it to be used much like a traditional gaming laptop, but, with the cover removed, you’re left with a chunky tablet that’s capable of playing the likes of GTA V on high settings.

Our unit is configured with a monstrous Core i9 processor and a respectable RTX 3050 Ti, but, if you’re seeking the ultimate in performance, Asus sells an optional external GPU to take things to the next level.

The Flow Z13 immediately makes a strong impression. It’s surprisingly compact and feels reassuringly solid in the hand. The aesthetic is very gamer-centric, but Asus has managed to keep things stylish and subdued enough to not feel garish. It gives us a space-age vibe, and that seems appropriate given the unusual form factor and cutting-edge hardware inside. 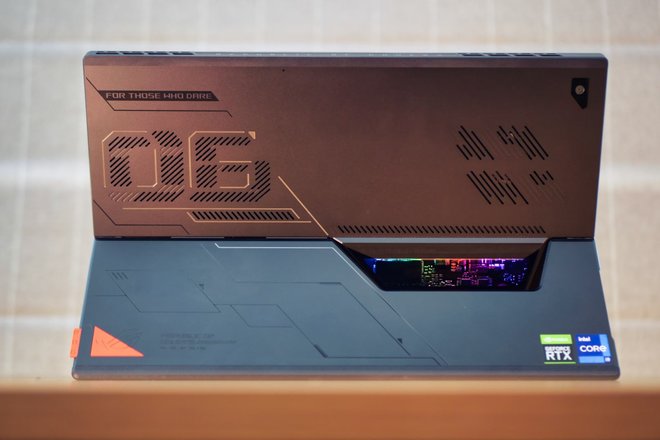 The ventilation is neatly integrated into the rear panel’s design and a small clear window gives a glimpse of the internals, which are, of course, illuminated with RGB lighting. The kickstand feels sturdy and has a wide range of motion to allow for a multitude of viewing angles.

The Mini LED display looks gorgeous and gets very bright. The 1920 x 1200 resolution strikes a great balance, with a high enough pixel density to look sharp whilst keeping the pixel count low enough for the 3050 Ti to run games efficiently. The screen has a taller 16:10 aspect ratio, which we love for productivity, but, while it’s tall for a laptop screen, it’s much narrower than the majority of tablets and does look unusual when held in portrait mode. 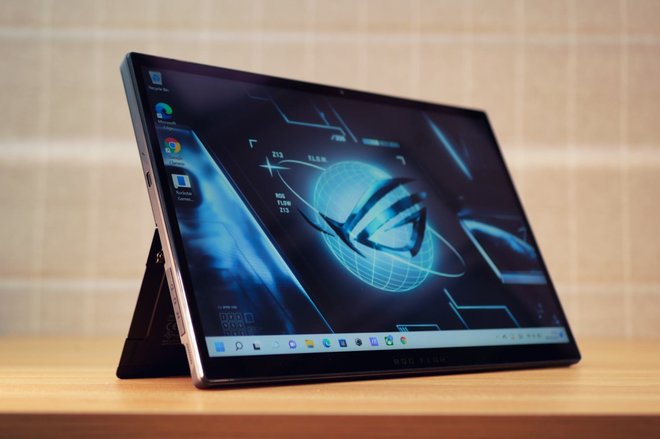 The 16:10 aspect ratio adapts much more easily to media viewing and, of course, gaming than the usual more-square tablet designs. It also runs at 120Hz and supports Nvidia G-Sync to keep things looking buttery smooth.

The screen is also available with a 4K resolution and 60Hz refresh rate. That configuration would be much more suited to content creation than gaming – and, given the powerful Core i9 processor on board, it might appeal to some working in that area. However, while the 100 per cent sRGB coverage is enough for most of us, it may not quite be enough for the most discerning creative professionals.

Of course, being a tablet, the display is touchscreen and glass-fronted. We found it to be responsive and easy to use, but, unfortunately, we weren’t able to test it with a stylus, which might be where it really shines. The part that lets it down is the Windows 11 tablet experience.

Everything works, but it’s just much harder to do on the touchscreen than it is with a keyboard and a trackpad. We often found ourselves getting frustrated and quickly clipping the keyboard cover back on whenever we ran into something unintuitive.

When it comes to audio, the built-in speakers get much louder than we expected. You’ll certainly never have any trouble hearing them, but the sound tends toward the tinnier end of the spectrum, as is often the case with laptop speakers. Most of the time, you’re probably going to want to pair the Z13 with a decent pair of headphones.

The keyboard cover is a very similar design to that found on the Microsoft Surface convertible lineup, but this one comes with per-key RGB lighting for ultimate gaming flair. Despite how thin the keyboard is, it manages to provide a surprisingly good typing experience, too. There’s more key travel than you might expect, a satisfying click and very little deck-flex. We’ve tested proper laptops with worse flex in the keyboard, and when you consider that this one is less than 5mm thick, it’s truly impressive stuff.

The trackpad is decent, but it doesn’t quite reach the impeccably high standards of the keyboard. We found it to be very responsive, and multi-touch gestures worked well, but the coating doesn’t glide as well as the glass trackpads that have become so common on premium laptops. It’s also a lot smaller than you might be used to, but we didn’t find this to be a hindrance in use.

Of course, the whole thing can be popped off with ease and is secured by some strong magnets. It’s very satisfying to attach and is instantly recognised by Windows when doing so. While attached, the keyboard sits at a comfortable incline, but it can also be used completely flat on your desk, should you so wish. That feels horrifically un-ergonomic, though, so we’d recommend sticking to the standard configuration.

The Asus XG Mobile is an external GPU with an integrated docking station. It’s a pricey add on, but it transforms the Z13 into a powerful desktop gaming solution. It’s built around an Nvidia GeForce RTX 3080 mobile GPU, which gives the system a serious bump in gaming performance. It also significantly expands the connectivity, allowing you to connect multiple monitors, USB peripherals and even wired internet via the RJ45 port.

The XG Mobile box has some weight to it, at around 1KG, but it’s quite compact, thanks to the use of a mobile GPU instead of a desktop card. This makes it far more convenient to throw into a backpack – especially when compared with a traditional eGPU box. The downside is quite obvious, though, and that is the fact that you won’t be able to upgrade the graphics card in the future.

For now, the RTX 3080 is one of the best cards around, and it did not disappoint in our testing. However, when you consider that the XG Mobile is an add on that costs well above four figures, the lack of upgradability certainly sours the deal.

The XG Mobile connects via a proprietary port on the side of the Z13 and locks into place securely with a slider on the side of the connector. It’s powered by a single kettle lead which simultaneously powers the GPU and charges the battery. There is a kickstand on the side that allows the unit to be placed either horizontally or vertically. It’s an impressive piece of engineering, it’s just a shame that its price tag will prohibit most users from getting to experience it.

Performance on the Flow Z13 varies quite significantly depending on how it’s used. For the best gaming experience, you’ll want to keep it plugged into the wall charger (and of course, it only gets better if you plug it into the XG dock). That said, the humble 3050 Ti impressed us, even on battery power, and, if you’re willing to turn some settings down, you can get a good gaming experience in almost any title. 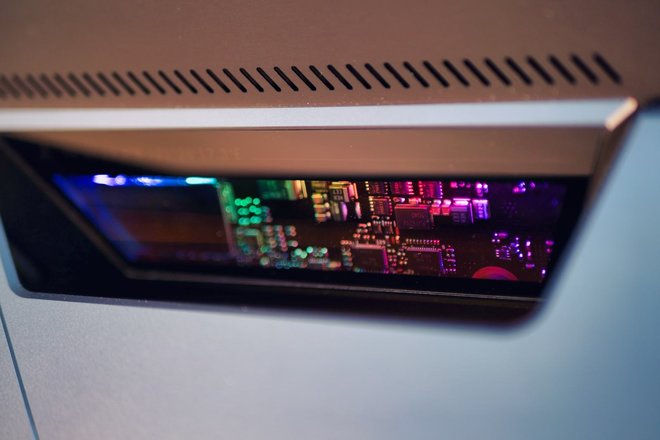 What impressed us more, though, was how quiet the machine operates. It’s no easy feat cooling such a tightly packed gaming PC, and this is evidenced by the hairdryer-like plumes of hot air that it emits while gaming. Even under pressure, the Z13 keeps the noise down and refrains from producing any of the high pitched whirring sounds that so-often plague compact gaming laptops. The XG dock, on the other hand, does get a bit noisier while trying to keep that 3080 at a reasonable temperature.

We were able to achieve frame rates well over 60fps in GTA V at very high settings, both on battery power and while plugged in – in both cases, the average was around 80fps but the dips were larger on battery power. This rockets up to around 185fps when using the XG dock.

We also tested CSGO as a less graphically intensive, but highly frame rate dependent, title. On high settings, we were able to achieve around 150fps average, which saturates the panel’s 120Hz refresh rate. It was a similar story here. With larger dips on battery power, however, we were always above 60fps and felt it was a very playable experience. It should come as no surprise that the XG Mobile didn’t break a sweat with CSGO and hovered around the 350fps mark.

As with most portable gaming devices, the battery life is less than ideal on the Flow Z13. When performing everyday tasks such as web browsing, watching videos, sending emails and the like, you can expect around six hours. If you boot up any fairly intensive games, you’ll be lucky if it can hit the two-hour mark. Thankfully, the included 100W USB-C power brick is fairly small and can charge the device back up to 50 per cent in just 30 minutes. 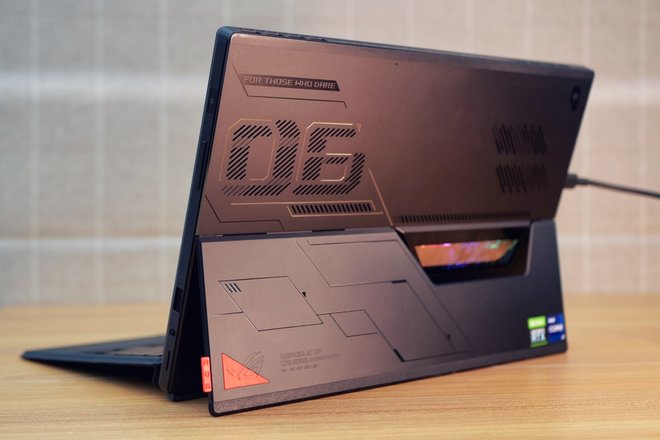 Connectivity is another interesting area on the Z13, as it’s all a matter of perspective. Compared to most gaming laptops, the lack of ports is quite apparent, but if you compare it to most tablets, then it’s above average. In our experience, we occasionally found the lack of USB ports frustrating. While it can be solved with an inexpensive USB hub, it would have been much nicer to have a couple of extra ports included.