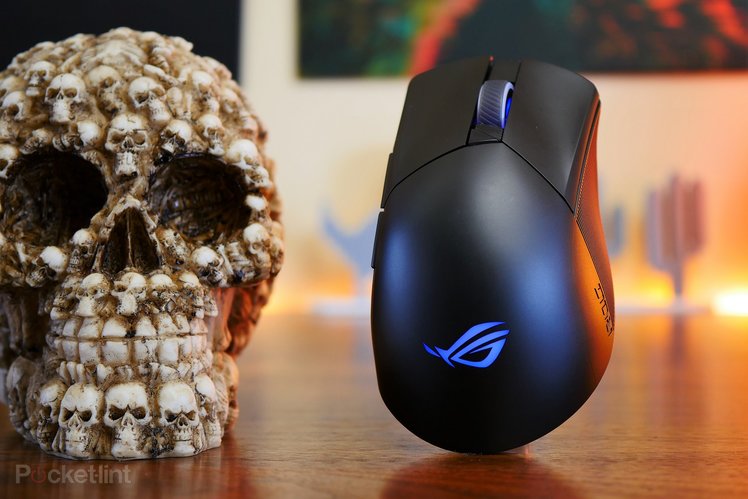 Looking for a mouse with a larger fit and a comfortable shape? Worried about your switches wearing out or not sure which ones to use? Need something low-latency but with multiple connection options? Then you might like to turn to the Asus ROG Gladius III Wireless.

This is, as its name suggests, the wireless version of this mouse. It sports some serious specs, too, and a really interesting design that makes it very appealing. We’ve been putting it to the test to see if it stands up as well in practice.

When we first got our hands on the ROG Gladius III Wireless we were struck by just how comfortably it fits in the hand. This is a larger-than-average mouse, with an asymmetrical design that’s ergonomic. It pushes the hand up off the desk a bit and allows you cup the mouse nicely, which makes it ideal for a palm grip, but it’ll also work well with other grip styles too.

At 89 grams, it’s heavier than many other gaming mice on the scene, but it is 30 per cent lighter than its predecessor. It’s also far from heavy. There’s a ridged texture on either side that makes it easy to keep hold of during a good gaming session.

On the left side, that grippy section also doubles-up as a nifty-looking RGB lighting zone, with subtle lighting shining through etched lettering. “Dare to play”, “ROG Gladius”, “Republic of gamers” all appear in tiny letters down one side. 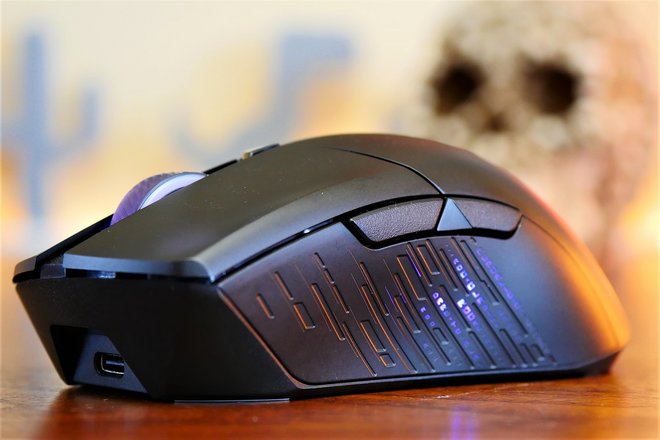 The design has been cleverly thought out using a pivoted mechanism – which ensures there’s no gap between the buttons and the switches. This results in a near-instant click when you press and no unnecessary play or wobble in the buttons either.

On the underside, there are five PFTE zones – read that as Teflon, used cut down on friction – which helps ensure a slick and swift movement across your desk. The result is a comfortable mouse that’s both easy to flick about, while being accurate and responsive too.

Also on the underside, you’ll find a magnetic dock for the wireless USB dongle, as well as a button for switching profiles and pairing with Bluetooth devices. This mouse is designed to work in multiple modes, with wired USB-C, wireless 2.4 GHz, and Bluetooth connectivity options. Wireless naturally has a lower latency connection than Bluetooth, while you can get more battery life out of it in Bluetooth mode. 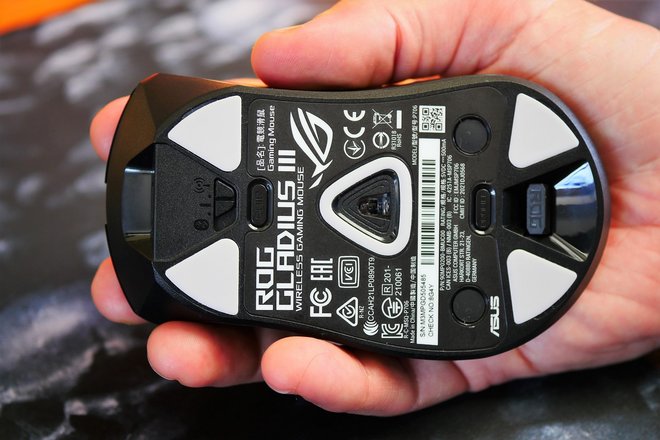 The ROG Gladius III Wireless also has the bonus of using a USB-C connection, which is fairly unusual even in 2021, but makes a big difference when you need to quickly plug in for a charge. It comes with an extension dock so you can keep the dongle within reach and easily move from wireless to wired mode.

One of the biggest highlights of the ROG Gladius III Wireless is the hot-swappable switch design. Remove a couple of screws and fiddle with the top cover and you can access the inner workings. From there you can then remove and replace the pre-installed switches.

As standard, it comes with ROG Micro Switches – which are gold-plated and have been sorted to ensure there’s minimal difference between their feel and use. But there are also some Omron optical micro switches included that you can easily swap out.

This is fairly fantastic, as the mouse is built to take two different sorts of switches with its push-fit socket design. The choice is yours: you can use either 3-pin or 5-pin switches.

If you’ve read about or are worried about double-click issues that some other mechanical mice suffer from then this is a great option for future peace of mind. If the switches ever wear out, you can just swap them for new ones. Alternatively, you can install your favourite ones and upgrade the mouse with ease.

As standard, we found the ROG Gladius III Wireless to be more than capable enough, even without swapping switches. It offers fast actuation and no unwanted clicks, just satisfying action and accuracy.

The specs on the ROG Gladius III Wireless impress in other areas too. It can manage as much as 85 hours of battery life when used in Bluetooth mode, but even the wireless mode has fairly decent battery life. Despite being heavier than other lightweight mice, it has some good specs in terms of speed and acceleration and we certainly had no trouble using it when playing fast-paced first-person shooters. 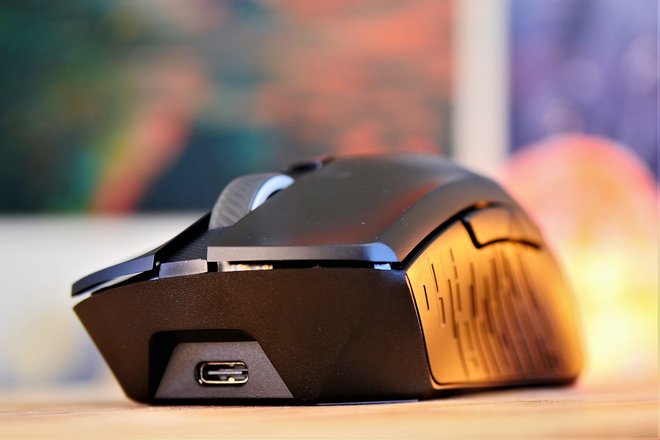 A high max DPI level (meaning it’s super sensitive relative to your physical movement/weight projection) and 1000Hz polling rate (the number of times per second the mouse ‘talks’ to your PC) seemingly round off a nice package in terms of specification.

The mouse wheel is also nicely designed with a surprisingly subtle RGB glow that’s partially opaque. It has some subtle feedback on use and satisfying action too.

The Asus ROG Gladius III Wireless can be customised and tweaked within the Armoury Crate software. From there you can do various things like changing button settings and adjusting performance. You can set four different DPI levels that can be switched between using a button behind the mouse wheel. You can even customise button presses too.

There are a number of different button options to choose from, including keyboard button presses, multimedia controls, Windows shortcuts, and more. You can setup multiple profiles to use for different situations that you can setup and then change between using the button underneath. Other options include minor tweaks to lift-off distance and surface calibration as well as RGB lighting.