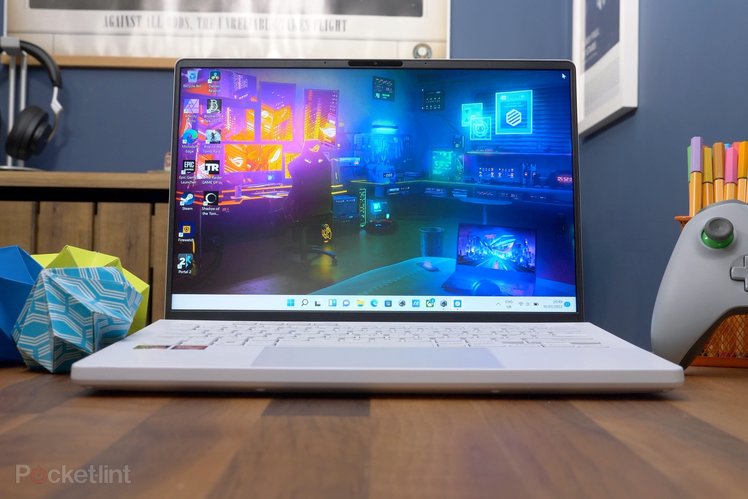 Getting a great gaming laptop that’s super-powerful and can handle the most demanding AAA titles has often meant investing in a big, bulky machine. Even while they’re getting slimmer and lighter, there’s still a leaning towards bigger machines, with big displays.

But what if you don’t want that? That’s where the Asus ROG Zephyrus G14 steps in. It’s a compact machine with a fast refresh screen that’s great for gaming on, and won’t require you to buy a bigger backpack to carry it. Plus, it’s not hideously expensive.

The ROG Zephyrus G14’s design is undoubtedly one of the things that attracts us most to this laptop. Compared to the 15-to-17-inch machines of the world, the 14-inch G14 is a very compact machine. It’ll fit in your bag without much effort, and sits neatly on your lap without commanding too much space.

It’s that Goldilocks “just right” size, never too cumbersome, never too much of an effort to use. At nearly 20mm thick when shut, it’s hardly Ultrabook skinny, but it’s still thin enough that it’s no burden.

What’s more, our review unit has a lovely matte white finish, which just looks great, especially when contrasted against the skinny black bezel that frames the display. It doesn’t just look good either, it feels good. The white finish is soft, rather than being a cold, metallic feel. But we suspect that for those who like to game using the keyboard, it might get a little too warm during longer sessions.

There are a couple of other design highlights. One being the hinge, which allows the display to pivot back all the way until it’s lying flat on whatever surface it’s sat on. Due to the way the hinge and the lid have been designed, it also lifts the laptop off the surface, allowing air to pass underneath to help with cooling.

What’s interesting here is that that there’s a metal plate on the underside of the machine that’s designed to help with cooling. It works alongside the fans and vapour chambers to keep it running smoothly. It does get quite hot under there when plugged in during gaming, so it’s probably not something you want on your lap for prolonged periods, particularly not on warmer days. However, if you’re just using it for work, it rarely gets warm enough to cause any discomfort. 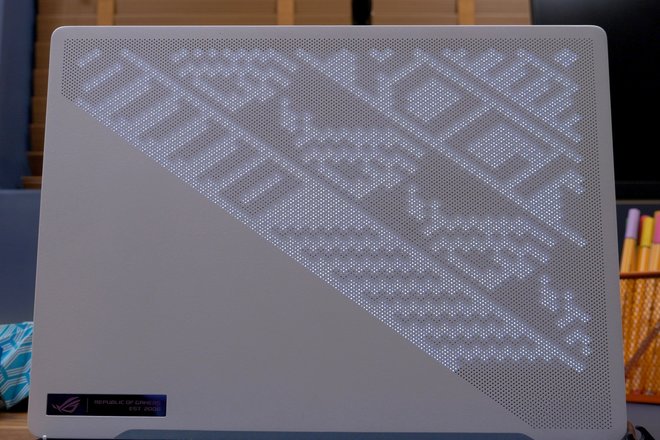 One other eye-catching detail is the array of LEDs on the laptop’s cover. There are over 1400 of them, which light up in patterns and animations. It’s probably the one obvious sign that this is indeed a gaming laptop. But, if you want, you can just switch it off. Since you can’t even really see it yourself, it definitely seems more like something designed to draw attention, rather than add anything to your own experience. But it is fun.

It’s no exaggeration to say the keyboard on the G14 is one of the nicest laptop keyboards currently on the market. It’s got that right balance of key travel, feedback and responsiveness to make it really easy and quick to type on. There’s no learning curve for touch-typing really, regardless of what you’re used to using. Despite often using a mechanical keyboard at our desk and an iPad Magic Keyboard when we’re on the move, the switch over to this chiclet keyboard was seamless. 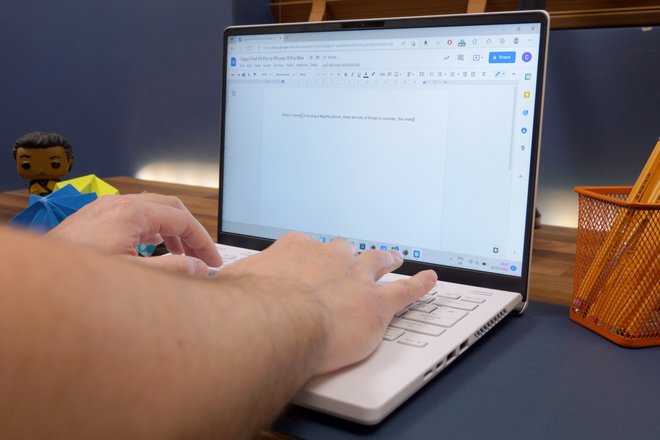 It’s well-positioned too, and is relatively central in relation to its positioning alongside the huge trackpad beneath it. That means we didn’t ever find we were accidentally touching or activating that touchpad when typing. Plus, it’s got a one-zone RGB backlighting system. In comparison to some of the fancier, brighter keyboard backlighting systems, it’s quite dim and subtle, but that might be a good thing for some.

That trackpad itself is a joy to use as well. Thanks to the size, and the responsiveness, we found it great for just about everything. This combination of surface area and quick response means it’s ideal for multi-touch gestures, like the pinching to zoom and multiple digit swiping for quickly moving between desktop views and zooming in/out of images.

What ports does it have?

In terms of port there are plenty. Want USB-C? You get two of them. Both USB 3.2, both with DisplayPort for output to a monitor. One of them even supports Power Delivery up to 100W, so you can charge the laptop using a USB-C cable if you’d rather not carry the ginormous 240W power brick with you on your travels. 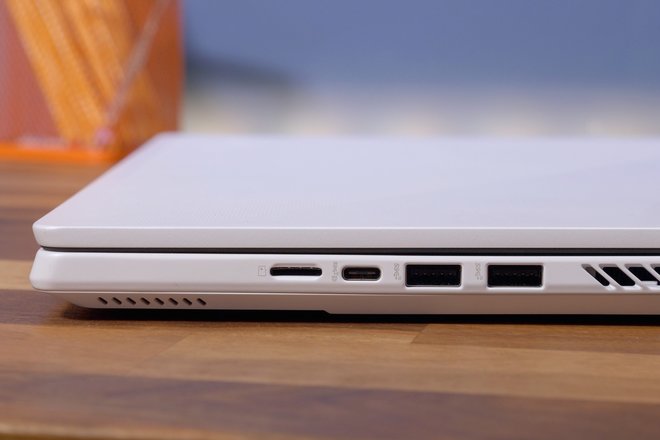 The only issue with using this for charging is that it’s not particularly effective at charging quickly. At least, not if you’re using the laptop while charging. Still, there is a proprietary charging port as well, which uses the aforementioned power brick to top up the battery quickly.

It also has two USB 3.2 Type-A ports, a 3.5mm audio input/output port, and a microSD card reader (sadly no full sized SD here). Add to that an HDMI 2.0b port and you have pretty much everything you’ll need.

While the display is primed and ready for gaming, just like a lot of the G14’s other elements, it’s also great for other tasks. Being WQXGA resolution, or 2560 x 1600 pixels, means that although not 4K, it’s certainly sharp enough for pretty much anything. Being “just” 14-inches diagonally means the pixels are packed in densely, so give the appearance of a screen that’s really crisp.

That’s not all that makes it an impressive display though. With 500 nits peak brightness and Dolby Vision certification, it’s bright and vibrant too, despite being an IPS LCD panel. Contrast levels seem pretty high too, with black and dark elements on the screen being impressively dark. 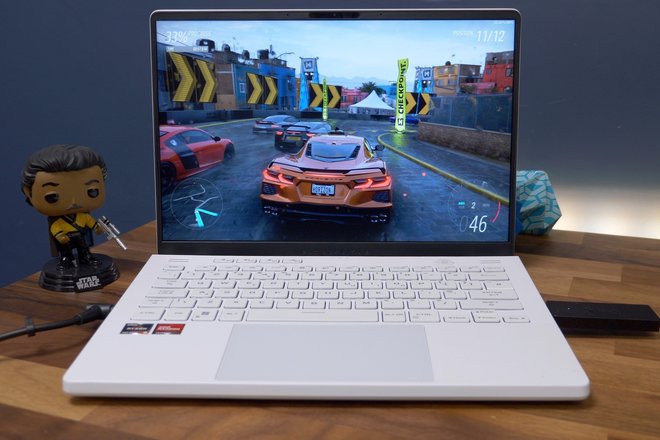 Combine that impressive panel with an anti-glare surface, and you have a display that’s great to look at regardless of the light levels around you. Colours are lively and vibrant, without seeming too over-saturated. That makes it more than suitable for video watching and media consumption. In fact, you can use it comfortably for photo and video editing when needed. Although those who need a completely neutral colour balance may find it a bit too lively for that.

Add to that display an array of six speakers and you have a pretty immersive media experience all told. These speakers support Dolby Atmos, but in a machine this small, we’re not talking about that full room-filling surround sound effect. But you still get more of an immersive feel than you might from a bog standard pair of stereo speakers. They’re certainly loud enough to cut over the noise of the fans as well, which is always useful.

There are various configurations of the ROG Zephyrus G14, but all of them are AMD-powered, with various combinations of Ryzen 9 CPU and Radeon RX graphics. Our own review unit features the Ryzen 6900HS and a Radeon RX 6800S graphics card. This places it pretty high up the food chain when it comes to raw power and performance. 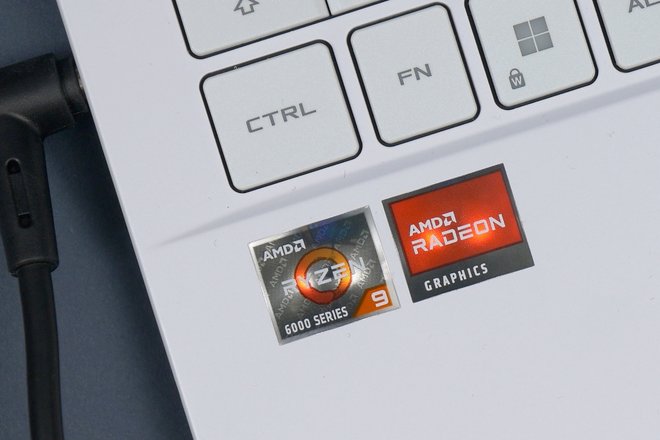 For an idea of how much power is in here, you get a clue when you first load up Forza Horizon 5. On first boot up the game detects your system settings and suggests a performance setting. With this Asus laptop it automatically chose ‘Extreme’. So it’s got some muscle under the hood, that’s for sure.

Forza Horizon 5 looked and responded great during our testing on the G14. Graphics remained crisp and sharp with the maximum resolution enabled. With the frames per second on constant view, we rarely saw it drop below 55fps, and was usually somewhere between 55-60fps. Only rare frame drops occurred, typically when we’d accidentally left another programme running in the background.

We played a host of other titles, too, from the likes of Rise of the Tomb Raider, indie titles like Firewatch and Brothers – A Tale of Two Sons, plus a bit of time with an old favourite: Portal 2.

When it comes to benchmarks, the G14 performs well. With the laptop plugged in and set to ‘Performance Mode’, Cinebench R23 returned multi-core results that were higher than an Intel Core i9 equivalent. It delivered a multi-core score over 11,600 for us, with a single-core scoring around the 1400 point mark. 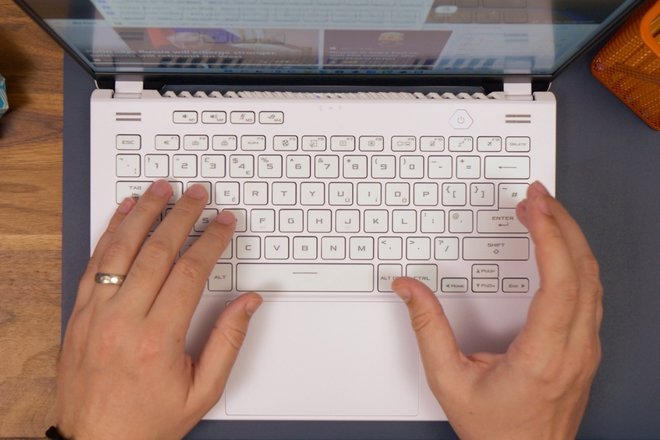 In the built-in benchmark mode in Forza Horizon 5, with the resolution set to 1080p, the G14 hit around 75fps consistently, and with the resolution set to maximum for the display it was at around 55fps. We got similar results with Rise of the Tomb Raider’s built-in benchmark mode, with an average of nearly 72fps across the three scenes it ran through.

For the most part, once games got up and running, the laptop’s fans kicked in, but it was rarely overly loud. You could hear them – of course you can, it’s a gaming laptop – but it never got to the point of sounding like a helicopter taking off.

Of course, if you kick it into ‘Turbo’ mode, it can up the performance a tad more and get you extra. It’ll benchmark higher. In the Tomb Raider benchmark it reached 88fps on average, and scored higher in Cinebench as well. The compromise? A lot more fan noise. 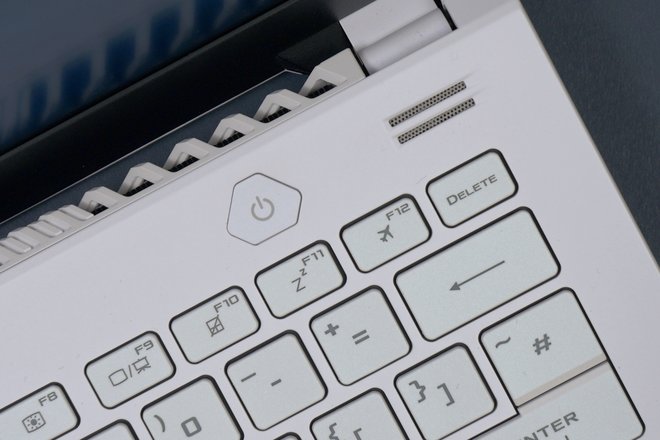 On the flip side, there’s a ‘Silent’ mode which kicks in when you unplug the power cable. It brings the power output down a bit, reducing the need for active cooling. You don’t want to play any intensive games on this setting (you can’t really), but for those times you want to use it to do normal everyday tasks, it’s a setting worth having. It helps you get your work done quietly, and ensures the battery doesn’t drain too quickly.

In fact, using it to do work for an extended period, it wasn’t too difficult to get it to last about seven hours. Sometimes a little longer. Unlike some bigger, older machines, it wasn’t something that was overly concerning. We could comfortably sit for four hours at a time knowing we’d not have to panic about battery life, scrambling to find a power source – and that’s quite rare for a powerful gaming laptop.

So what about other practicalities? Well, there’s the 720p webcam in the top bezel. It’s not the best for video calling, but it is equipped with IR, which means you can use it for Windows Hello facial recognition. It makes signing into the laptop really quick and easy. 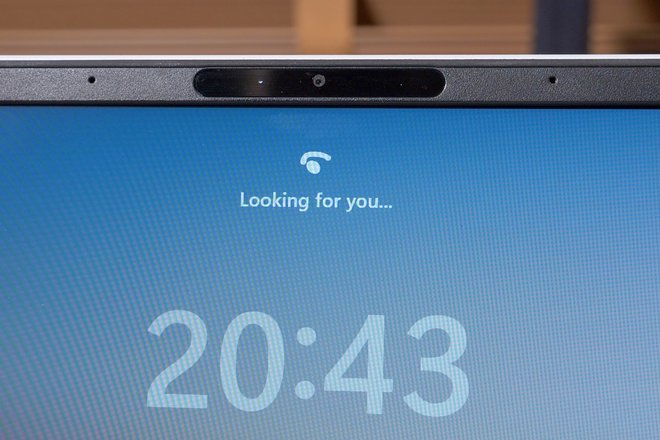 From a wireless connectivity standpoint there’s both WiFi 6E and Bluetooth 5.2 support. It’s more than well enough equipped to go with you for the next few years, and it’ll support all your latest headphones, speakers and Wi-Fi routers too. Connectivity solid in our testing – we didn’t struggle with it randomly disconnecting like we have on some other laptops.