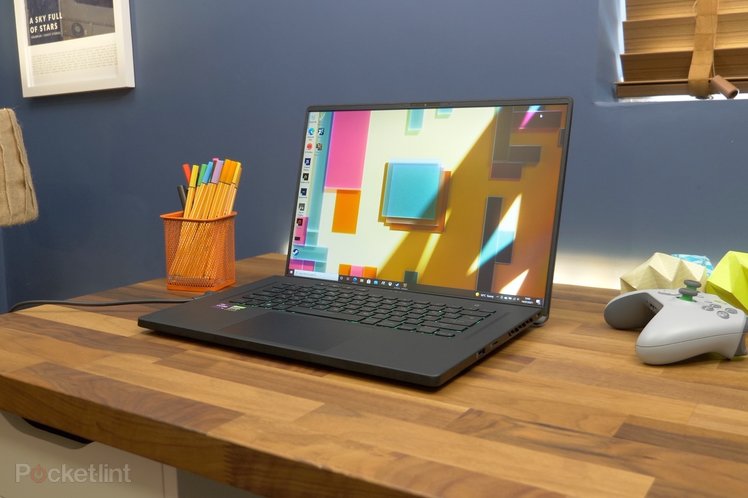 It didn’t seem that long ago that if you wanted a powerful gaming laptop with a big screen you had to put up with having a monstrously huge machine. Asus is trying to change that with one of its latest ROG laptops: the Zephyrus M16.

The M16 is attempting to bring you the big screen and all the big specs, but without leaving you feeling like you’re carrying a small house with you in your backpack. Is it the ultimate gaming machine?

There’s a lot to like about the way Asus built the 2021 Zephyrus M16. The ROG team has realised that the name of the game is subtlety. You can make it look like a gamer laptop, but don’t push it so far that it puts off creatives. Because, after all, this machine is capable of both high-powered gaming and creativity.

That means you still get a splash of colour within the design, but it’s not in-your-face about it. For instance, the front cover looks like a subtle matte black surface half covered in tiny machined holes. Then you shine light at it and you see a flash of rainbow colour coming through from the underside. It’s eye-catching yet simultaneously subtle.

Then the hinge that holds that cover/display rotates underneath the body of the laptop so that it lifts it up at an angle as you open it up, giving more room for airflow beneath. What’s more, the screen can keep going until it’s lying completely flat (if you want it to), thanks to a 180-degree hinge mechanism.

Once opened up, the screen is surrounded by super skinny bezels and – because it’s a 16:10 aspect ratio display – that includes the bottom bezel too. There’s no massive ‘chin’ on this thing.

What’s really nice, though, is the texture of the laptop’s body. Rather than being a cold, hard and shiny metal, the matte black finish has more of a soft, warm and grippy feel. It’s a nice soft-touch finish, so it’s a pleasure to rest your wrists on it as you get your game on. 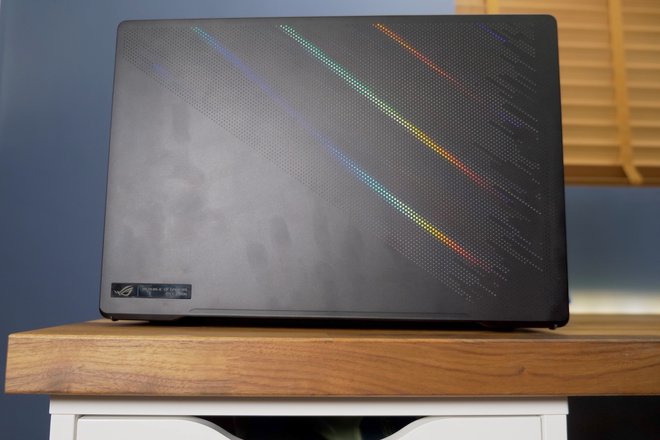 This beast of a laptop also has pretty much all the ports you could wish for. Up the left, there’s the power port, full-size HDMI 2.0b, Ethernet, USB-A, two Type-C ports, and a 3.5mm input/output for headphones and mics. Up the right side you’ll find a microSD card slot and another USB-A, so you can ensure your plug-in mouse (unless you’re using a wireless one) is on the correct side for your use.

It’s worth noting, one of those Type-C ports is USB 3.2, and the other is Thunderbolt 4. Both support DisplayPort for hooking up to monitors and power delivery for charging it via USB-C. You can use either to recharge, if needed, but you’ll get faster-charging using the (admittedly very bulky) power brick into the proprietary charging port, which leaves both those USB-C ports available for your use.

Undoubtedly the most impressive thing about this laptop’s design, however, is the size of it. It’s a 16-inch laptop but crammed into the form of a 15-inch one. So you get the bigger screen, without having to add any bulk. Yes it’s still chunky compared to the MacBook Pro and similar of this world, but for a 16-inch gaming machine, the Asus is surprisingly portable and compact. 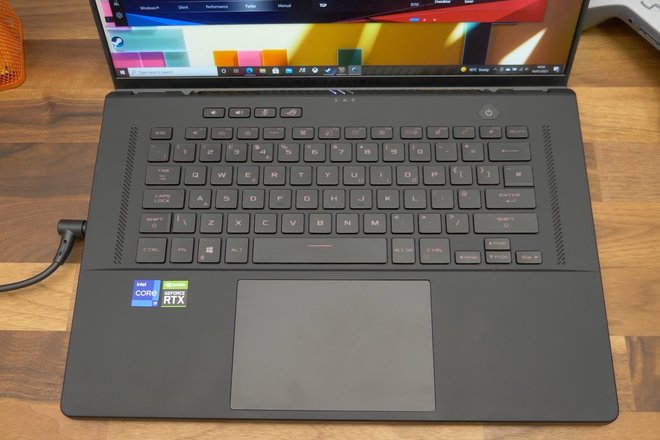 The keyboard design is similarly well thought-out. It’s not too cramped, with well-spaced keys, pleasing travel, and tactile response. It’s a great keyboard to type on and one that’s easy use day-in and day-out. It didn’t take long to get accustomed to touch-typing on it. Plus, it’s not annoyingly loud either. So you can feel the definite click, but don’t really hear it all that much. No more than any other slim-keyed notebook.

There are four dedicated buttons above the keyboard, making it easy to adjust volume, enabling/disabling the mic, and launching Asus’ own customisation software, Armoury Crate. The keys are also backlit using RGB LEDs, with any number of colour changing effects to choose from to suit your mood.

While there’s no doubt this is a fantastic gaming machine, which we’ll get into later, the M16 has enough about it in terms of hardware to make it great for just about everything. That includes media consumption. 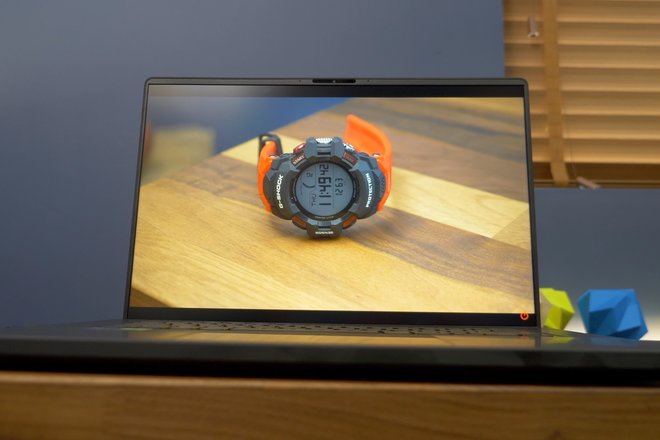 It’s not just about sharpness though, it’s about how it delivers colour and contrast. Watching Netflix Originals delivers superb natural colours, and it never seems to oversaturate them. It’s Dolby Vision compatible as well, so any DV content on Netlflix – or from whichever source – will look superb on this machine. It’s also no surprise that Asus is keen to boast about its 100 per cent DCI-P3 colour gamut and its Pantone validation. It’s made effort to tune this to high-end, pro-grade standards – and it shows.

Those qualities also make it primed and ready for content creation, for those who need to edit photos and edit video on the move and at home. Looking at a white page while document editing also delivers a crisp, white, clean look. It really is very versatile. And the fact it has an anti-glare surface means if you’re working in a bright environment you won’t have to deal with distracting reflections.

As mentioned, it’s 16:10 ratio rather than 16:9, which helps a lot with everything that isn’t video-watching. While working it essentially means the toolbars and extra bits of external graphics, such as tabs and menus, take up space that would normally be the screen’s bezels. It gives you that bit of extra space to work with, without adding an overly hefty amount of letterboxing during video watching. 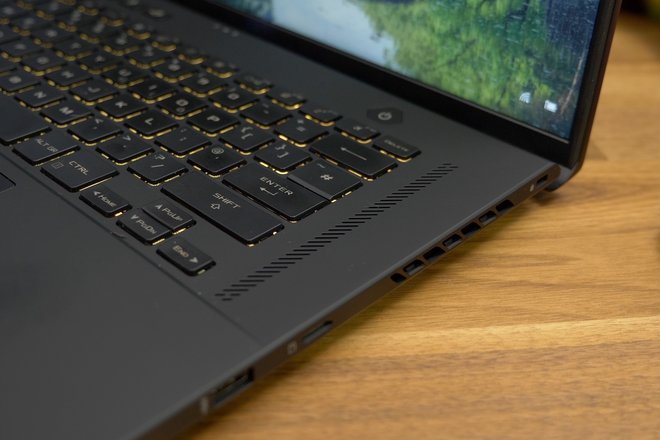 To add to its media consumption capabilities, Asus also built in a six speaker system which is genuinely great. Of course, it’s not the same as having a dedicated separate speaker, but for a set of laptop speakers it’s immersive and balanced.

There’s a clear difference in performance between using the M16 with the power adapter plugged in, and when using it on battery. At least, when it comes to its default power settings. That is largely expected on machines with powerful dedicated graphics cards. After all, if you set the machine to its most powerful setting and try to run it off the battery, it won’t last long (indeed, it won’t even let you use that mode without the power plugged in). 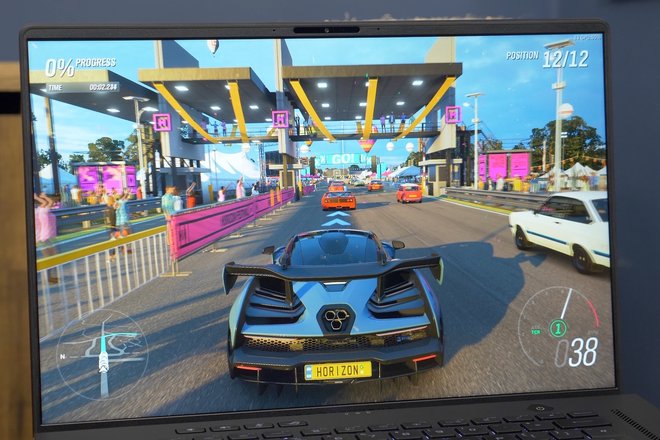 Leaving it to its default ‘Silent’ settings unplugged, if you try to play graphically intense games like Control the experience is practically unusable. In this mode, it deliberately throttles the CPU and doesn’t use the GPU, in order to keep the laptop running quietly. Animations stutter and movements are unresponsive.

Of course it’s a completely different story when you’ve got the power plugged in and the laptop switches automatically to ‘Performance’ or the even more impressive ‘Turbo’ mode (and iGPU mode is switch to auto or off). In this mode the gaming is smooth, quick and very responsive.

Games rarely dropped a frame and whether it was racing in Forza Horizon 4, or shooting enemies in Gears 5, the M16 kept up with the lot of it, delivering instant responses in games where it really does need to be quick. 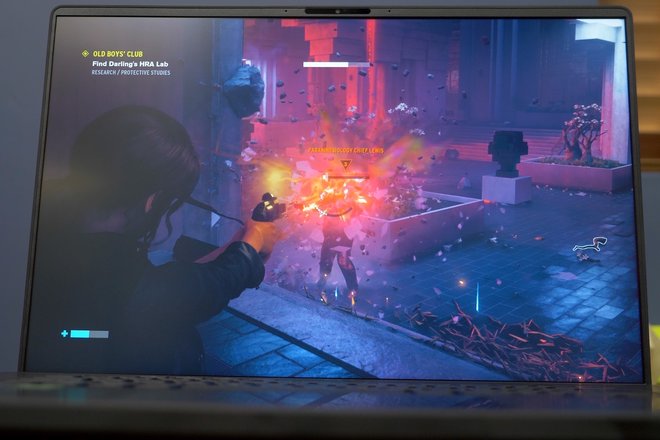 With more power being driven through the CPU and GPU, this then means more cooling is required – and boy can you hear it. Once in Turbo mode and running Control, the laptop’s fans become so loud that we couldn’t hear the audio or dialogue in the game and ended up switching on subtitles and using on-ear headphones. You can see why most gamers use top-tier headsets.

Given that there’s nowhere near as much space inside a laptop chassis to push air around, this is hardly surprising though. One thing that can be said when switching gears, however, is that in ‘Silent’ mode – ideal when you’re working, listening to music and such – delivers on its name: the fans are genuinely as close to silent as you’ll be able to discern.

If you want to fine tune it to your liking you can. Asus’ Armoury Crate software – which has its own dedicated shortcut button – will let you switch between performance modes or create your own manual setting. 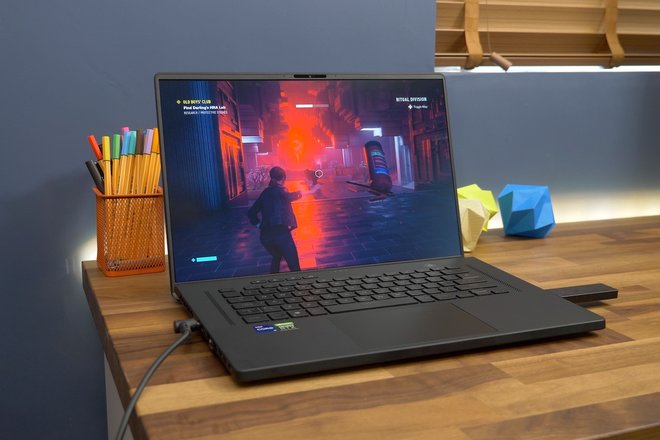 Gaming laptops are rarely known for their outstanding battery life. In fact, even with this laptop in ‘Silent’ mode, and the battery setting at ‘Better Battery’ it’ll barely last more than four hours on a full charge. Which might not sound great but, actually, as gaming laptops go that’s really not too bad. In ‘Performance’ mode, as you’d expect, it’s about a quarter of that time, close to an hour in total.

The same Armoury Crate software is what lets you adjust the iGPU mode. It has three settings: on, auto or off. In Auto, the graphics card only kicks in when the system decides it’s necessary, such as when you need a graphics boost during gaming or video rendering. If you like it silent while working, you can just switch it to ‘On’, then it uses the processor to process your graphics, and disables the GPU.

Being a gaming laptop, it would be remiss to not touch upon a little benchmarking. And when we ran this Intel Core i9 version of the M16 through the Heaven benchmark, most of the time will it was running through the graphics test at between 100-125fps, with it rarely ever dipping below 100fps. It wasn’t too different on Forza Horizon 4’s benchmarking test with resolution set to maximum available and Ultra settings enabled – it consistently hit 100fps throughout the test race scene. 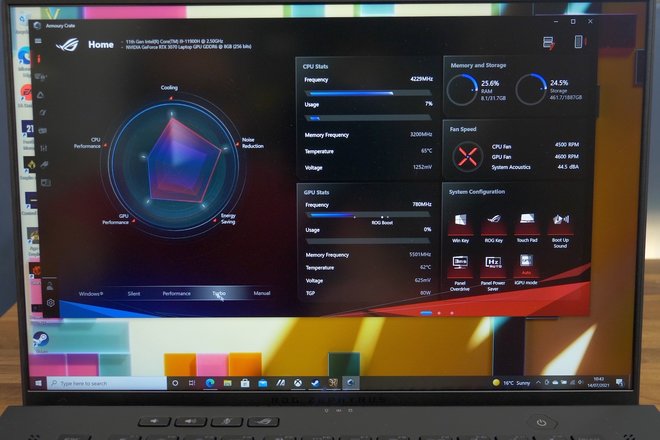 So while ‘Silent’ mode doesn’t let you game, there’s a sense that it tames the beast, making it a more friendly work and productivity machine, which is actually quite wonderful for a laptop that’s primarily aimed at gamers. You get the best of both worlds.