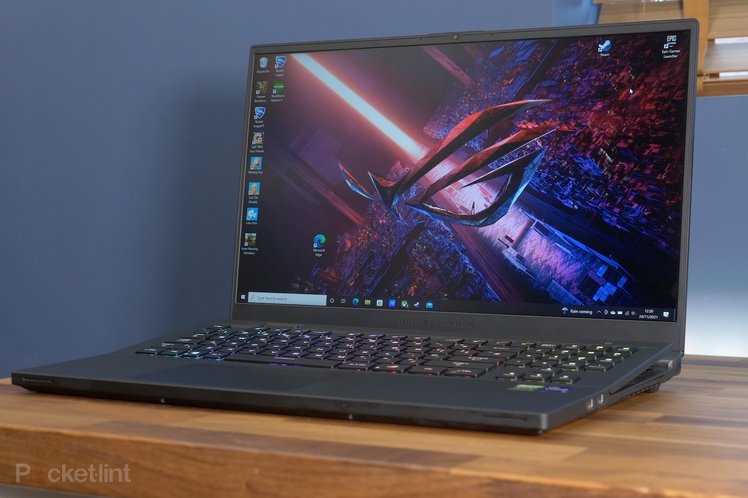 Asus has been hard at work updating a number of its ROG-branded gaming laptops – and one of the most unique of those machines is the Zephyrus S17, given it’s tilt-angle keyboard design. This is a big ol’ beast of a device, yet it’s attempting not to be too ostentatious.

With an inventive approach to cooling, an optical-mechanical keyboard, and lots of power under the hood, this could well be one of the most practical and brilliant 17-inch gaming laptops ever launched.

How big is too big?

It goes without saying that if the top thing on your list of desires for a gaming laptop is to have a big screen, you’re going to have to make peace with having a pretty hefty laptop. So no, the S17 isn’t even close to being a small and nimble machine, but what Asus has done with all that space is actually quite inventive. And – more importantly – it’s practical.

When it’s shut, it looks like a regular larger-scale matte black laptop. The metal lid has a subtle dot pattern and ROG branding. No bright in-your-face colours or sharp angles or anything insensible. But when you open it up, it reveals a slightly out-the-box surprise: the keyboard lifts up at an angle as you lift the lid and push it back. It’s very different, but serves a purpose.

The idea of having a keyboard at a slight angle is to give that feel of being at a desktop and using a keyboard on a desk. It’s only a gentle angle, which means it’s comfortable to type on, and – rather vitally – it allows air to flow underneath it too. This clever design means your hands stay cool on the keyboard, even in the midst of pushing the machine to its limits. Or, at least, cooler than they would be if you were resting them on a keyboard sunk into the body of the laptop.

The entire surface of the body where your hands and fingers rest is coated in a soft-touch finish, too, which makes it very comfy. It’s not cold and shiny. The Zephyrus S17 also has a full-sized keyboard and enough room for a Numpad and directional buttons separated from the typing space. There’s also a handy scroll wheel up above the function row, near the left corner, which lets you quickly turn the volume up and down. 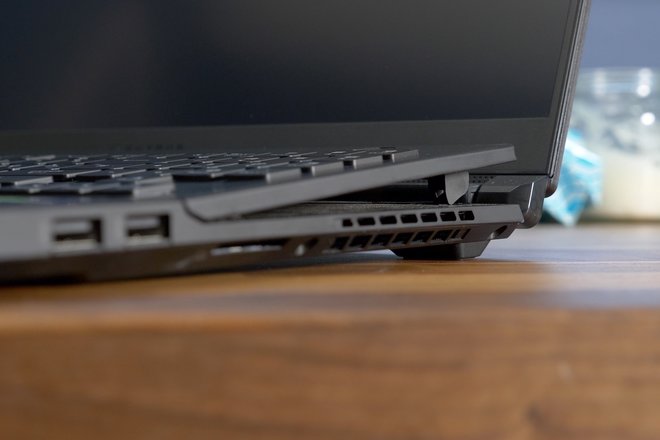 As for the keyboard itself, that’s pretty special too. Being a laptop obviously means you don’t get those full-size chunky buttons, but this design combines the low-profile keycaps with optical-mechanical switches, so it’s fast yet provides nearly 2mm of key travel.

The keys are really easy to type on, are really responsive, and give a proper clicky sound too. We’d rarely ever find ourselves missing the keys, or having to double press. And, because of that clicky sound, you absolutely know when you’ve pressed a button. The only downside to this is that if you’re working around others, your keyboard might just be a tad louder than the norm. You’ll certainly be heard.

There’s also RGB lighting, so you might be seen too. It’ll depend on your chosen lighting effect, with the S17 offering per-key RGB lighting, so the fluidity of any ‘breathing’ and colour-changing happens on a button-by-button basis. Depending on how much time you have, you can get down to a super granular level with this lighting. Or simply choose from one of the many preset colour cycles or strobing options. 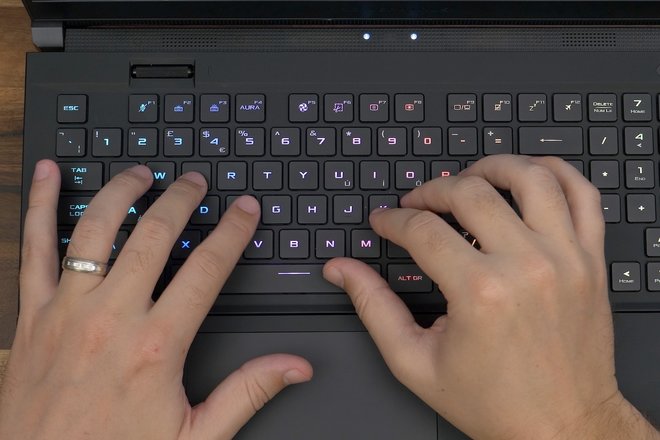 Despite not being a tiny laptop, the S17 is – for a 17-inch machine – quite compact all considered. It’s about 20mm thick at the front end when it’s shut, while the screen’s skinny bezel on the top and the left and right means the panel isn’t surrounded by a space-hogging frame.

Of course, it’s quite a heavy laptop, especially if you need to carry your machine around with you a lot. You’ll definitely notice it, more so because you also need to find space in your everyday carry bag for the power adapter that ships with it. It’s far from small: the term power ‘brick’ is almost literal in this case, as it’s about the width and length of a house brick (although it’s only about half the height).

How many ports does the S17 have? It has virtually everything you could conceive needing. The right side features two full-sized USB-A ports, plus a full-sized SD card reader. 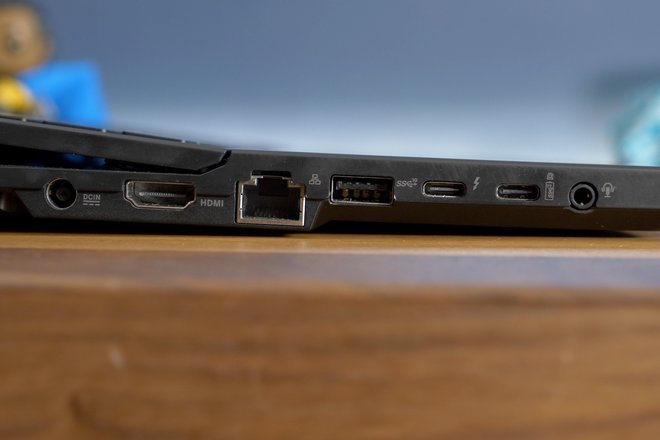 All the other ports live on the left side, including the proprietary power port, full-sized HDMI 2.0b port, Ethernet, another USB-A, and two USB-C ports (one of which is Thunderbolt 4 capable; the other is USB 3.2, but both support Power Delivery charging – but won’t give you the same kind of refill speed as if you use the enormous power brick that comes with the laptop).

The takeaway here is that there’s enough flexibility in connectivity to keep even the most demanding user happy. Whether you want wired or wireless connections. It’s compatible with Wi-Fi 6, too, giving you the speediest wireless internet connection, just in case a wired LAN connection isn’t practical in a given moment.

There are two options to choose from when it comes to picking the display for your ROG Zephyrus S17. You can either have a super-fast WQHD screen with 165Hz refresh rates or a 4K panel with a 120Hz refresh. If you like beautiful scenery in games and do a lot of creative work the 4K option is ideal. We were sent the 165Hz WQHD model which means one thing: it’s for fast games. 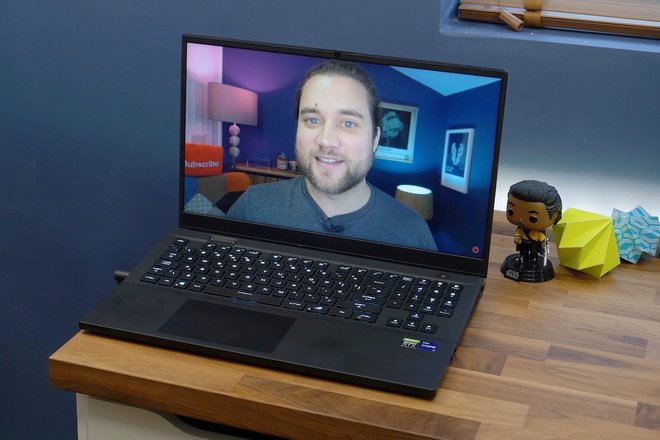 We’ll get more into performance in a bit, but when it comes to brightness and colours, this screen is more than capable. It’s bright, vivid and has decent contrast levels. What’s more, the anti-glare surface ensures you don’t get any distracting reflections.

We sometimes found the contrast levels were tuned a bit too high. For games, regardless of genre, it’s brilliant. But for doing any editing of photos or videos, it’s a little difficult to compensate, at least in its default mode.

Open Armoury Crate – Asus’ one-stop software shop for all things customisation – and you can select from a number of different screen presets. These adjust brightness, contrast and saturation to different levels. Plus there’s a colour temperature slider.

That’s not all you’ll find in Armoury Crate. There is all manner of system settings to tweak: from adjusting the keyboard’s RGB lighting patterns, to performance settings, and even launching any games installed on your PC. 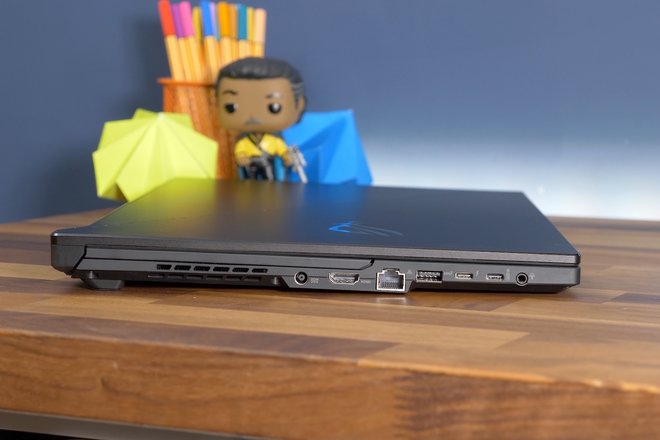 It’s a useful piece of software, but it’s not the only piece of pre-installed software on the system. Sadly, Asus seems to enjoy pre-installing McAfee security, and if you let your free trial expire you better believe it will just love pestering you about it in an obtrusive pop-up every time you power the laptop up.

As with any laptop there are plenty of configuration options when it comes to memory, storage and processing power. Our review unit came with 32GB RAM, 16GB of which is soldered to the board and another 16GB being removable. You can install a further 16GB, taking it up to 48GB if you wish. It also has 2TB M.2 NVMe storage, which is super fast.

This memory is alongside two very powerful brains: the Core i9 processor (11th Gen) and the Nvidia GeForce RTX 3080 GPU. With this CPU and dedicated graphics together, the sky’s the limit in terms of pure performance. 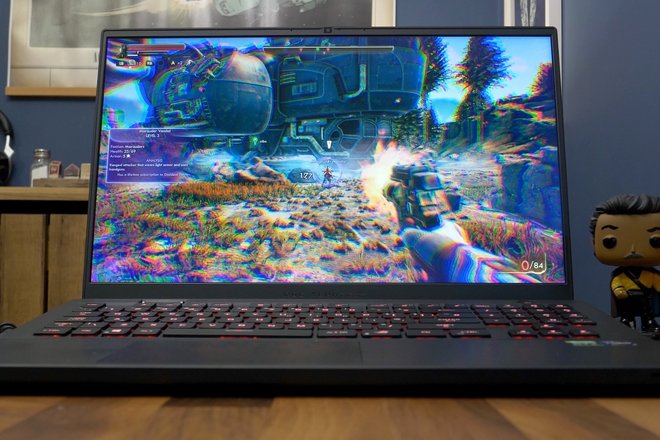 We played a number of different game titles on the S17, some more GPU-intensive than others, with those making the highest demand often being the ones that would force the fans to really kick into gear. For instance, pushing a game like Forza Horizon 4 to its maximum would mean the fans are pretty loud. We wouldn’t say they quite airplane-taking-off loud, and not as loud as the M16 we reviewed earlier in the year, but they’re far from quiet.

Regardless, the S17 won’t struggle with any modern titles. Animations and frame-rates are predominantly smooth and stutter-free, whether we were chilling with the calm exploration game, Sable, or trying to get the Unreliable to take flight in The Outer Worlds.

In the Forza Horizon 4 benchmarking tool, we benchmarked using the maximum resolution and frame-rate available for this model and it consistently tracked around 150fps. Similarly in the Heaven benchmark, with the test set to ‘Ultra’ settings, the frame-rate would stick between 140-160fps.

Using Cinebench to benchmark the Intel Core i9 inside yielded expected results. It completed the rendering tasks quickly in the multi-core test, scoring over 13400 points, which essentially means the only Intel CPU more powerful is the Xeon. 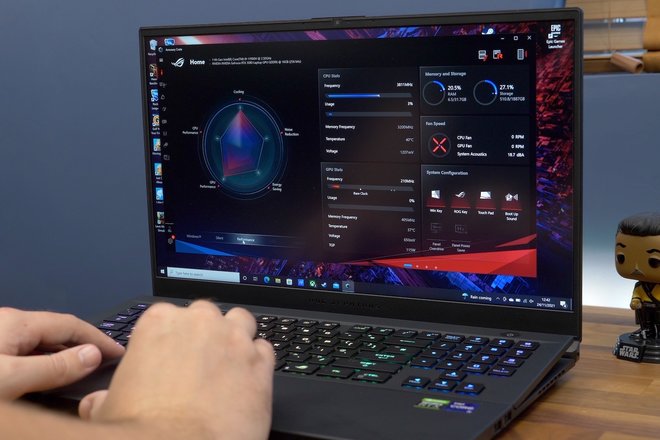 Of course, what it can do is often limited to the mode you’ve enabled using the built-in Armoury Crate app. For instance, if you’re not gaming and not plugged into power, it’s automatically in ‘Silent’ mode and so ensures that the CPU and GPU aren’t being used to full capacity (which wouldn’t be possible given the power demands). That means two things: less battery usage, and less heat, so the fans don’t kick on that often in this mode, but you can still get your work done.

Battery life is generally strong too, especially in this Silent mode. It wouldn’t be too difficult to get close to a full eight hour workday out of this laptop if you’re not pushing it to do quite power-intensive tasks.