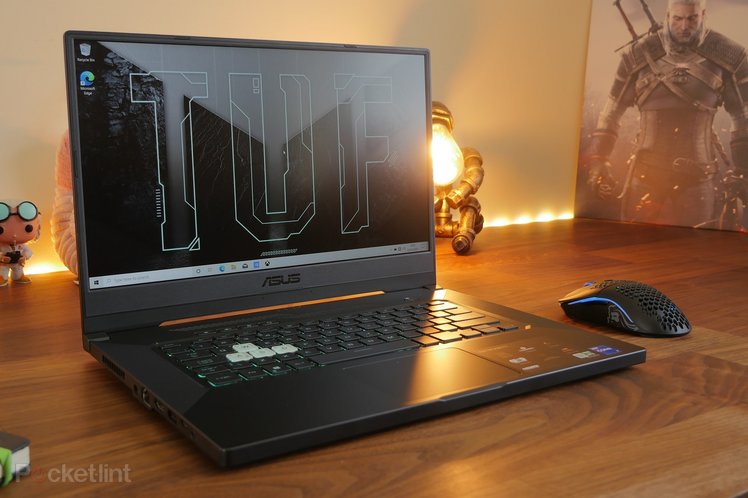 The Asus TUF Dash F15 is another of the company’s ultra-thin gaming laptops, which sports some serious specs in a compact, lightweight and portable frame.

Available in two colours with a small mix of specs options and some nifty design accents, the TUF Dash F15 is interesting enough on paper, but is it worth a buy? We’ve been gaming and working with it for a couple of weeks to find out.

A compact frame that packs power

In classic Asus fashion, the TUF Dash F15 features some nifty tech packed into a compact frame. That chassis has been put through the usual military standard durability tests, which in reality results in a solid frame that feels robust and well built. It doesn’t bend or flex easily during use and yet is light enough to carry around with you, or position on your lap when gaming.

Outwardly the TUF Dash F15 is also easy on the eyes. It’s available in two different colours – Moonlight White or Eclipse Gray – with understated accents on the shell and an equally subtle backlit keyboard.

Super-narrow bezels also ensure maximum screen real-estate and “minimal distraction” – though this does come at the expense of a webcam (ugh!).

Hidden within that frame is some powerful tech with options that include some of the best from Nvidia and Intel. This means the TUF Dash F15 is a capable gaming machine that can take advantage of ray tracing and DLSS, while also maximising performance with Dynamic Boost and keeping things running quietly with Whisper Mode. 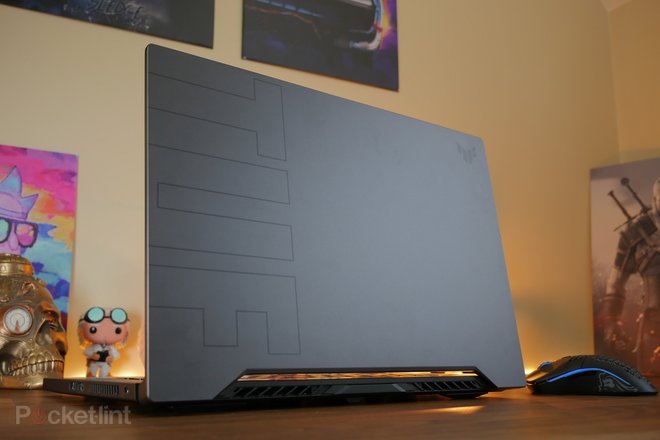 Naturally, the specs of this gaming laptop mean you can push the visuals up to maximum, but still get frame rates high enough to make the most of the 240hz screen. The Nvidia GeForce RTX 3070 is more than capable of driving this 15.6-inch display at Full HD resolution and delivering smooth gameplay experiences with satisfying visuals.

With this spec, you can also manage streaming to Twitch and the like if you want, while the addition of a RJ45 connection means you’ll have a solid connection when doing so.

The keyboard on this laptop is fairly basic compared to other Asus laptops we’ve tested though. At least in terms of RGB lighting anyway. There are very basic settings here, with just a few effects and no per-key illumination. It does, however, have some nicely accented WASD keys which help those stand out.

Despite only being 15.6-inches, the panel on this gaming laptop gives the impression of something larger. The thin bezels mean the screen stands out nicely and didn’t lead us to feel like we were straining to see our targets in Rainbow Six Siege or struggling fighting skeletons in Valheim.

The viewing angles on this screen are also satisfying, as are the colours. The Adaptive-Sync tech means the panel is also synchronised nicely with the GPU which results in ultra-smooth gaming visuals.

As with other Asus gaming laptops, the TUF Dash F15 lets you use Armoury Crate to tweak the visuals. There are various settings that adjust the colours of the screen to suit your mood or need. This includes settings for Vivid, Cinema, RTS, FPS, and Eye Care. You can tweak what you’re seeing to maximise the look and feel of a game or eliminate eye-taxing blue light if you’re simply using the laptop for work.

Armoury Crate also lets you do things like monitor system performance, frequencies and temperatures, and switch between the various performance modes to increase power or reduce fan noise.

Performance-wise, the TUF Dash F15 does a good job. It wasn’t quite as impressive as the ROG Strix G15 we tested recently but still manages some decent frame-rates.

Where that laptop managed 64fps on Assassin’s Creed Odyessy, this TUF Dash F15 averaged 50fps. Similarly, the G15 pushed 200fps in Rainbow Six Siege while the TUF Dash F15 got around the 150fps mark. Still, those aren’t performance levels to be sniffed at on the maximum settings – but shows that the slender frame has an impact overall.

Continuing a trend of usefulness, the TUF Dash F15 sports a decent number of ports and connectivity options. For those serious gamers looking to stream or game with a solid connection, there’s an Ethernet port, but the machine is also Wi-Fi 6 capable – which means a solid and satisfying connection whatever you’re doing.

There’s also no shortage of USB ports. Though we will note Asus has chosen to place two of them on the right-hand side, which is a pain when you’re trying to use a dedicated gaming mouse rather than the lacklustre trackpad for your gaming sessions.

Yes, we didn’t get on with the trackpad on this laptop. It’s finicky and frustrating and the fact that two out of the three USB Type-A ports are on the right means you need a decent amount of desk space to comfortably game and not have wires get in the way – unless you have a wireless mouse.

That’s not the only connection niggle either. Once again, if you want to use DisplayPort to output to an external monitor you’ll need to buy an adapter as it’s only available via USB-C. There’s no standard DisplayPort or Mini DisplayPort connection – which is a pain if you’re planning on gaming in VR.

As with other recent thin and light gaming laptops from Asus, there’s also the distinct lack of a webcam. This is an odd choice in our mind considering how many Teams, Skype and Zoom video calls we’ve all been having in the last year. If you’re purely using it for gaming though, then it’s not a bother – as you’ll want a better accessory separate anyway.

The TUF Dash F15 has speakers that are capable enough to overpower its cooling fans and a two-way noise cancellation mic setup which means you can be heard if you’re using the built-in mic to chat to friends. It’s still worth investing in a decent gaming headset if you really want to get lost in the games – as on max settings the fans are far from quiet and you will eventually get fed up with the white noise whirr from them.

One area the TUF Dash F15 impresses is battery life. We could get through most of the day working and browsing and we also managed hours and hours of Netflix watching before the machine ran out of juice. In a gaming specific laptop away from the plug that’s an unusual accomplishment. 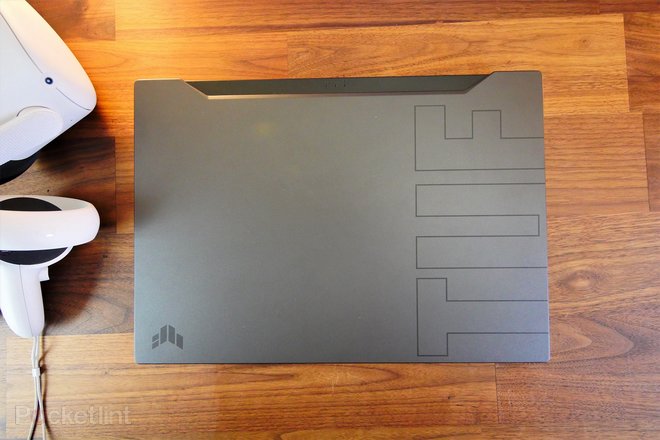 We did note a performance hit when playing on battery alone – and that was a more significant one than we encountered with the Strix G15. But then if you want to make the most of the display you’ll be using it plugged in for gaming anyway.

But for general day-to-day use, this laptop won’t disappoint and you certainly won’t find yourself running for the plug every five minutes.