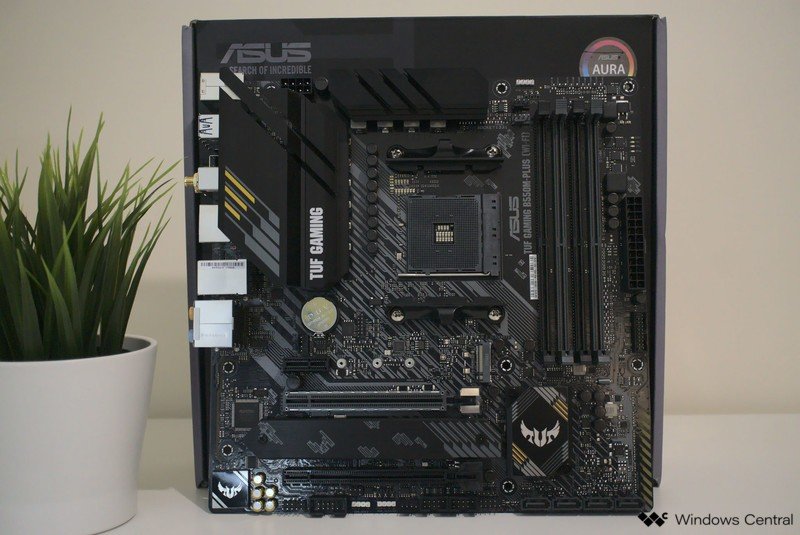 A small and mighty motherboard for Ryzen 5000 CPUs.

Not all motherboards come in one size. ATX is probably most familiar but can be quite the beast when trying to kit out a PC case that’s a little on the small side. MicroATX is the next step down before hitting mini-ITX and acts as the middle-ground between compactness and functionality.

The ASUS TUF Gaming B550M-Plus is pretty special in that regard. Not only is it MicroATX, but it’s also rocking AMD’s B550 chipset, a slightly more affordable option compared to the range-topping X570. That makes this motherboard rather affordable, but not quite as affordable as some of the competition.

ASUS hasn’t cut as many corners, which includes Wi-Fi 6 and 2.5Gb LAN, full support for DDR4-4600 RAM as well as the latest Ryzen 5000 series CPUs, and quite the beefy power delivery for this class. But how does this all come together? Is this a motherboard worth buying for AMD’s new processor line-up? 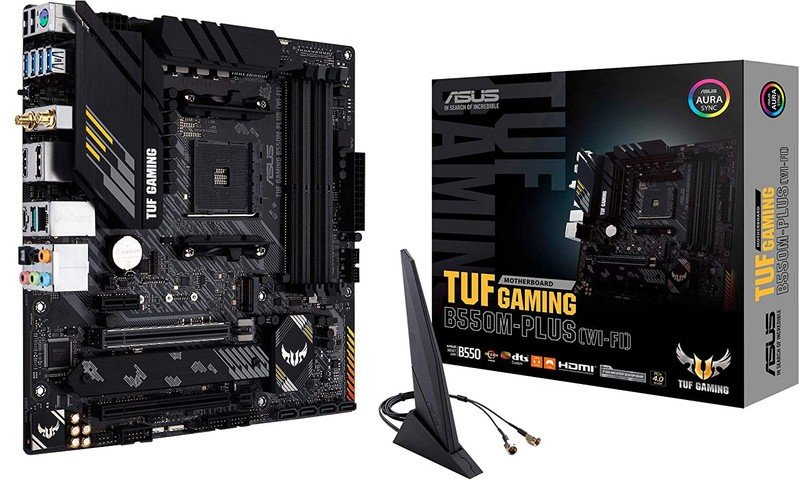 Bottom line: It’s got the looks, the features you’ll actually use, and support for the latest from AMD. The TUF Gaming B550M-Plus from ASUS is tough enough to handle even some overclocking with a Ryzen 9 3900X, making this one awesome mid-range compact motherboard. 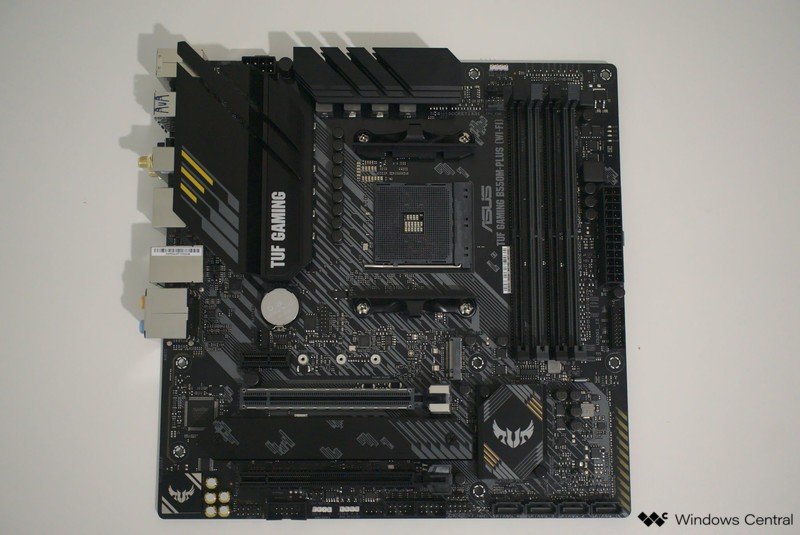 The TUF Gaming B550M-Plus from ASUS has plenty going for it. It’s a MicroATX board with four DIMM slots, two full-size PCIe x16 expansion slots, two M.2 slots, four SATA ports, and all the rear I/O you’ll need for accessories and other external hardware. For the price, it’s well-equipped and would make for quite the foundation inside smaller chassis.

Because of the form factor, some may find this specification sheet a little limiting, particularly the single PCIe x1 slot and just four SATA ports. It’s also got an 8+2 power phase design, which isn’t quite as capable as larger ATX AMD motherboards from ASUS. Still, overclocking is pretty straightforward and achievable, as I’ll go over in this review.

The MicroATX form factor means ASUS had to spend more time planning out the PCB to fit everything on it, but the feature list is pretty extensive. Because this is a B550 chipset-touting motherboard, you get PCIe 4.0 support here, which’s also found on premium X570 chipset motherboards. Interestingly, Intel has yet to offer PCIe 4.0 support, allowing AMD to get ahead.

PCIe 4.0 isn’t anything to scream about right now since there’s not really anything out there that can really take advantage of the new standard, aside from M.2 SSD storage. Still, for a mid-range motherboard, having the option available with the TUF Gaming B550M-Plus is a nice touch. And it’s not a bad board to look at either.

There are plenty of motherboards available today with obnoxious styling. I’m not entirely sure at what point manufacturers decided gamers wanted bright lights and extreme design, but you can easily find such elements on most components, motherboards included. Luckily, the TUF Gaming B550M-Plus is well-designed. It’s more of a subtle design with a few touches, so you know it can “go fast.”

No longer do we have to put up with ugly green PCBs, and the grey and black design of this board is a great look for almost any PC build. There are a few RGB LEDs in the motherboard’s bottom-right corner, but they’re not designed to be part of an all-out RGB PC build. Another positive with the B550 chipset, compared to the X570, is the lack of any requirement for active cooling with a small fan. 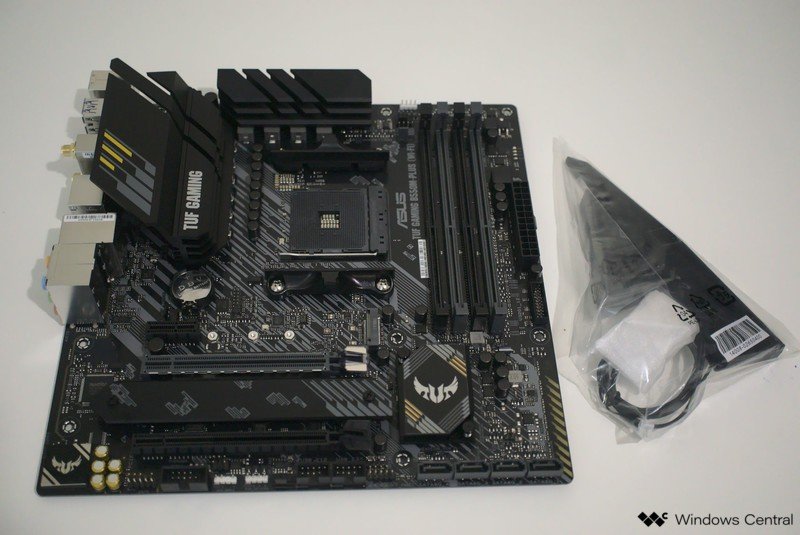 As aforementioned in the specifications section, ASUS opted to include two full-sized x16 PCIe slots, though only one of them is PCIe 4.0. These are joined by two M.2 slots, four SATA ports, and a single x1 PCIe slot. The four DIMM slots can take up to 128GB of RAM clocked at 4600MHz. Even at this price point, it’s possible to put together quite a capable gaming PC.

And you’ll be able to connect all your favorite gaming accessories too. The rear I/O on this board is rock solid, covering USB 3.2 Gen 2 (USB-A and USB-C), USB 3.2 Gen 1, and USB 2.0 for good measure. There’s even DisplayPort and HDMI if you plan on using an AMD APU with an integrated GPU.

There is a slight downside to the audio performance with the TUF Gaming B550M-Plus, rocking Realtek’s S1200A audio codec. It’s not bad per se but isn’t anything to write home about when other motherboards come with better, more recent codec solutions. If you use a USB headset with a dedicated DAC, you won’t notice any difference, and this drawback becomes moot.

The voltage regulator modules (VRM) that are responsible for handling the power supply to your CPU are beefy enough to handle even the more powerful Ryzen 9 range of processors. You can even get away with some overclocking here. They get hot, especially when you crank up the voltage, but the heatsinks are rather large and contact the VRMs to result in better heat dissipation.

The BIOS is what you’d come to expect from modern ASUS motherboards and is one of the best in its class. It’s easy to set automatic overclocking or to get dirty and set values yourself. It’s worth noting that options here aren’t quite as extensive as more capable X570 chipset-touting motherboards, but it’ll get the job done.

Testing out the B550M-Plus, we went all out with the AMD Ryzen 9 3900X, soon to be succeeded by Ryzen 9 5000 series processors. Still, it provides good ground for testing AM4 motherboards. I left all settings at stock values for running benchmarks.

PCMark 10 and CPU-Z scores were well in line with what’s expected by a B550 motherboard. Even though this is a smaller motherboard with a few features cut from the spec sheet, it doesn’t disappoint where it matters most — in games and productivity suites.

Toying around with BIOS settings, it’s easy to get a little more from the Ryzen 9 3900X, even on this MicroATX B550 motherboard. It may not be priced as high as more premium X570 motherboards, but this board can easily handle pretty much anything you can throw at it from AMD. 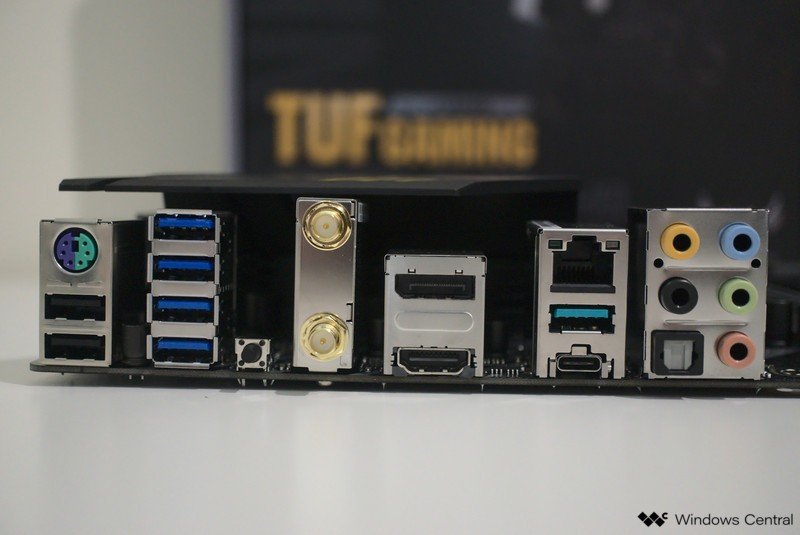 Networking-wise, ASUS offers plenty of choices here with premium results. Not only is the 1Gb we’d usually find on MicroATX boards gone in favor of a faster 2.5Gb interface, but ASUS also added Intel Wi-Fi 6. That’s right, this is an AMD motherboard, but ASUS went out its way to add a dedicated Intel Wi-Fi 6 AX200 NIC module.

Should you buy the ASUS TUF Gaming B550M-Plus? 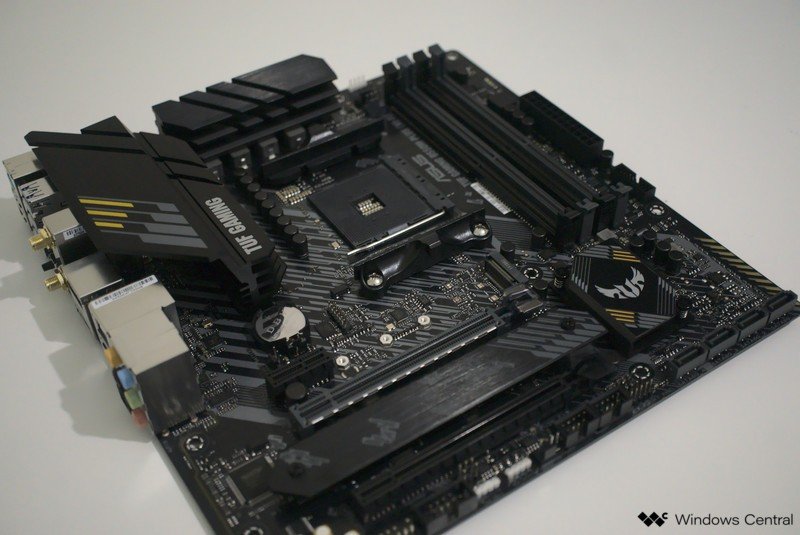 The ASUS TUF Gaming B550M-Plus is a brilliant mid-tier motherboard with extended functionality. You get 2.5Gb LAN, Wi-Fi 6, PCIe 4.0, and the ability to overclock even a Ryzen 9 3900X processor. All this on a compact MicroATX form factor. If you plan on putting together a smaller PC build, this will make for one TUF foundation.

It may be one of the best motherboards, but it’s not perfect, however. There’s no support for Ryzen 1000 or 2000 series CPUs here, so you will need to replace the processor if you already own one. There’s also the ever-so-slightly sub-par audio codec compared to other motherboards. It’s also not rocking the absolute best in terms of power delivery, but this is a mid-range option so that corners will be cut.

Thankfully, ASUS cut the right corners to not impact performance too much, if at all. Testing showed promising results compared to competing motherboards in its class, and you can pair it up with any supported Ryzen processor and create a capable PC. The bonus is support for Ryzen 5000 processors, allowing you to enjoy the next-gen performance.

A stable, affordable AMD board

If you need PCIe 4.0 support, desire to use AMD’s new Ryzen 5000 series CPUs, and don’t want to pay too much for a decently powerful motherboard, the ASUS TUF Gaming B550M-Plus is a great choice.