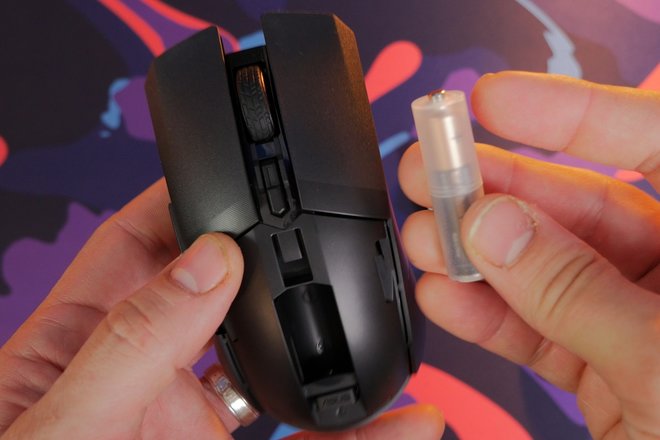 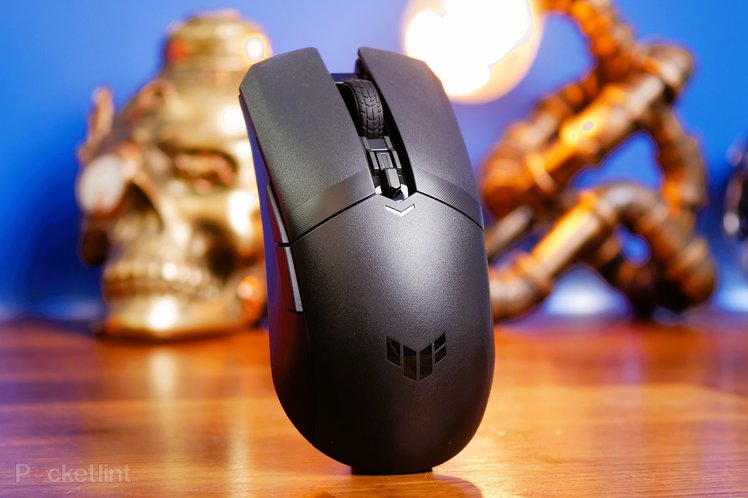 The wireless version of the TUF Gaming M4 is a lightweight mouse with several tricks up its sleeve, principal of which is that it’s powered by replaceable batteries and doesn’t even have a wire or charging cable included in the box. Indeed, there’s not even a hole to plug it in.

We’ve been playing with the TUF Gaming M4 Wireless to see how it holds up against the competition. Is battery power the way forward?

Lightweight but at a price

It was when unboxing the TUF Gaming M4 Wireless that we saw the spare AA battery nestled in the cardboard and the AAA battery stored inside its shell. It’s certainly unusual to find a gaming mouse with removable and replaceable batteries. This is interesting (and useful) for several different reasons.

With most wireless mice you’re stuck with an internal battery that will slowly degrade over time, eventually rendering the mouse useless at some point. That’s not the case here, as you can keep swapping batteries until you wear it out completely or decide you fancy something new. With the TUF Gaming M4 Wireless that’ll likely be when the buttons wear out – after 60 million clicks.

The TUF Gaming M4 Wireless is also designed to take either an AAA battery or AA battery, each having its own benefit. Using the AAA battery, for example, makes the mouse lighter at around 77 grams compared to 86 grams with the AA battery. You’ll get more battery life out of the AA battery of course, if you’re happy to pay for that with the added mass. There’s a housing for the AAA battery that converts to fit in the AA slot, which is clever stuff.

It’s worth noting that Asus claims the mouse weighs just 62 grams, but that’s without the battery or the dongle that’s stored within when not used. Meaning that, yes, you can technically make it lighter that way, but then it won’t work. 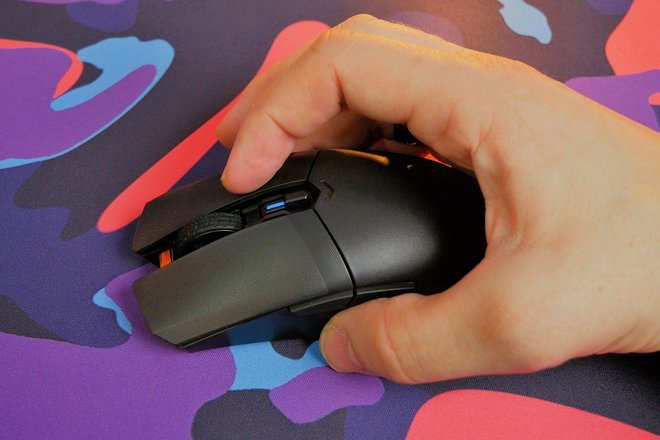 The second point of interest is that the TUF Gaming M4 Wireless doesn’t have a wire of any sort. At the front where you’d normally find a hole for a USB-C or Micro-USB port, there’s nothing but plastic. This is beneficial as that means there are no extra wires to worry about and no mess on your desk. The downside is when the battery is running low you can’t just grab a cable and put it into wired mode. Instead, you’ll need to run about the house trying to find a spare AA or AAA battery.

On top of the TUF Gaming M4 Wireless there’s a DPI button, next to which is an LED indicator that changes colour to tell you what DPI level you’ve set the mouse to. Press the button and it changes colours between red, purple, blue and green, to represent the four customisable stages of DPI accessible in the Armoury Crate software.

That same indicator will also turn red when the battery is dropping low. By default when it hits 30 per cent power, the light will glow and flash to warn you. You can adjust when this happens in the software and you can also tweak the sleep mode settings to increase longevity. So if you’re paying attention, you shouldn’t ever be caught out. 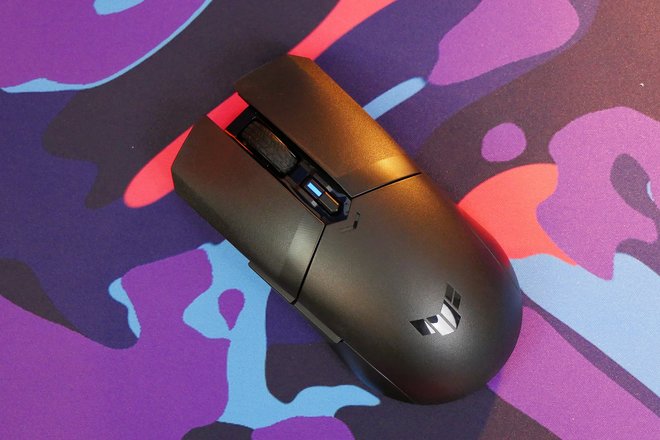 We also found the battery life to be surprisingly good, even with heavy use and just the AAA battery.

Decent specs for the price

The TUF Gaming M4 Wireless is an affordable wireless mouse with specs that, on paper, shouldn’t be sniffed at. However, they’re not the highest-end out there: the Asus TUF Gaming M4 Air, as one example, has higher a higher max speed, acceleration and DPI. 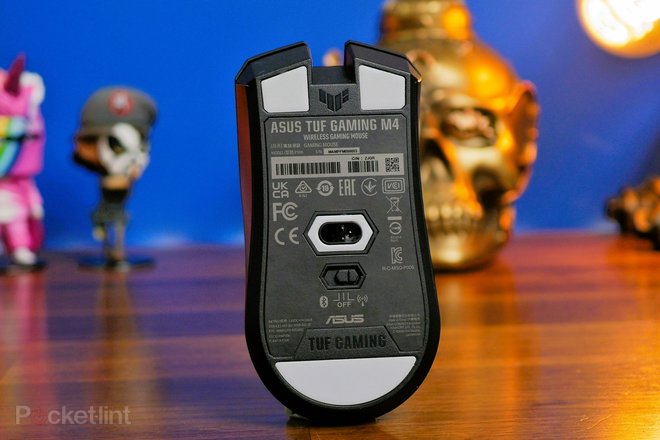 But that doesn’t mean the M4 Wireless is a bad mouse. We found it accurate and effective to use for gaming and pleasant for daily use too. It offers both Bluetooth 5.1 connectivity and 2.4GHz wireless via the included dongle too. Naturally, you get more battery life with Bluetooth, but lower latency and higher polling rate over 2.4GHz wireless.

Asus says that the Asus TUF Gaming M4 Air is ambidextrous, but we disagree. Yes, it’s nearly symmetrical in shape and it’s a nice size too, but there are only thumb buttons on the left, making it very much a right-handed mouse in our mind.

It’s said to be mid-sized and we’ve certainly found it a nice fit in the hand. The side buttons are also easy to access and the main buttons give a satisfying click when actuated. The buttons are tight and there’s no play or low-quality wobble here either. 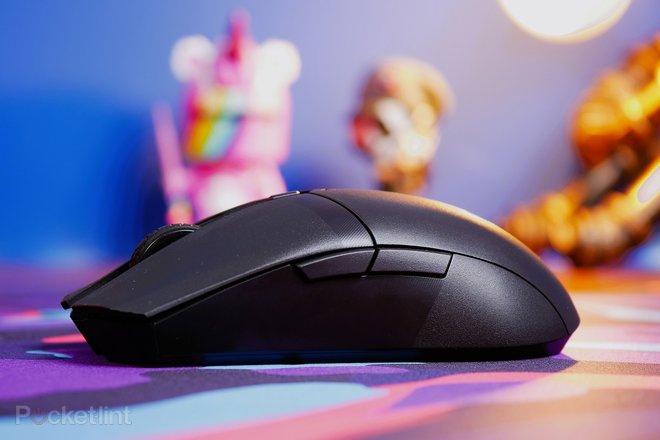 As you can see from the photos, the TUF Gaming M4 Wireless features a slightly rough PBT outer shell. The sides are ridged and the overall body has a matte finish to it. This means it’s easy to hold, even if you get moist hands during a furious gaming session.

There are quite a few things you can tweak in Armoury Crate. We’ve already mentioned that you can adjust sleep settings to increase battery life. You can also set four DPI levels that will then be stored in the onboard memory. It defaults to 1,000Hz polling rate, but you can adjust it if you want to.

You’re able to reprogramme all the buttons except the left button. This includes a middle mouse click and scroll up/down. You can also record macros and set them to buttons or assign plenty of other things including keyboard button presses, multimedia buttons, Windows shortcuts and more. We particularly like the stealth button which essentially acts as a boss button and minimises all your windows.