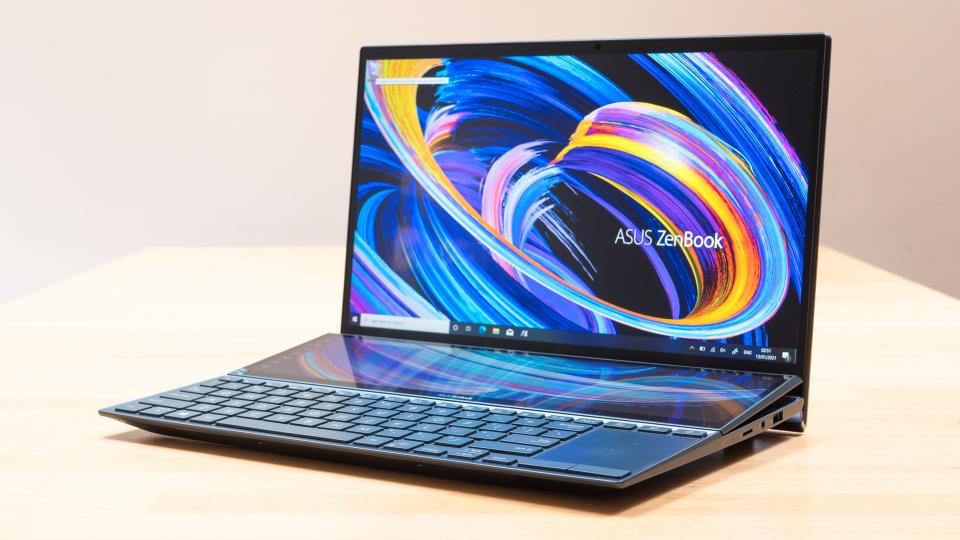 The Asus ZenBook Duo UX482 is one of Asus’ growing range of dual-screen laptops – a machine that bravely rips up the rule books of laptop design in order to bring consumers something different.

Like the Zephyrus Duo GX550 I reviewed in 2020, it has not one screen but, as the name implies, two, with a second 12.6in, letterbox-shaped, “ScreenPad” sandwiched between the main 14in display and the keyboard below it.

It’s an ingenious approach and one that Asus seems determined to make work. Indeed, this second-generation Zenbook Duo has a number of improvements. Chief among these is that the second screen now lifts out of the laptop chassis from the rear as you open the lid, making it easier to read.

Asus ZenBook Duo UX482 review: What you need to know

The presence of the second display also shifts the keyboard forward and the touchpad over the right, so that’s the main thing to be aware of before you splash your cash. Otherwise, this latest ZenBook Duo uses a fairly standard array of components.

As you might expect, the ZenBook Duo UX482 is a little more expensive than the single screen equivalents in Asus’ range. Prices for the Core i5 start at £1,500 and rise as you go up the specification ladder.

No other mainstream manufacturer has anything quite like the Duo on its books other than, perhaps, Lenovo with its ThinkPad X1 Fold, although that’s much more expensive.

For that reason, the rivals I’m going to pick out are “normal” laptops with roughly the same amount of screen space: 16in or 17in. 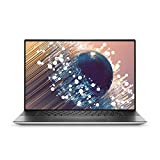 Among our favourites are the Apple MacBook Pro 16in, which is more powerful but more expensive and physically larger than the ZenBook Duo. Alternatively, you have the LG Gram 17 (2020) which is lighter and cheaper but, again, larger. Finally, there’s the Dell XPS 17, which is again larger and heavier than the Duo and also uses less up to date 10th-gen Intel processors.

The Asus ZenBook Duo UX482 looks well placed to compete in terms of both its price and specification, then, with similar machines. The question is, how well does it work as a laptop?

My overall impressions of the new ZenBook are very positive. With the lid closed, you wouldn’t know there was a second display secreted inside. It looks like a very nicely designed premium laptop just like so many others on the market. Indeed, with a cool-to-the touch metal lid, an attractive dark-blue paint job and a subtle pattern of concentric circles on the lid it’s more appealing than most.

It’s a touch on the chunky side, but a thickness of 17mm and weight of 1.6kg is hardly what you’d call portly, especially when you consider that the total amount of screen space on offer (around 799cm2) is similar to 17in laptops, which tend to be heavier, larger and bulkier. Only the skeletal LG Gram, of the 17in laptops I’ve reviewed in the last year or so, beats the Duo in this regard (1.35kg) and even the Gram is larger than the UX482.

Connectivity is respectable, too, with one USB-A port, a pair of USB-C Thunderbolt 4 ports and a full-sized HDMI output, alongside a 3.5mm headset jack and a microSD card reader. And build quality in general is up to snuff. The lid feels nice and stiff, as does the base and the ScreenPad Plus’ lifting mechanism feels robustly made as well. 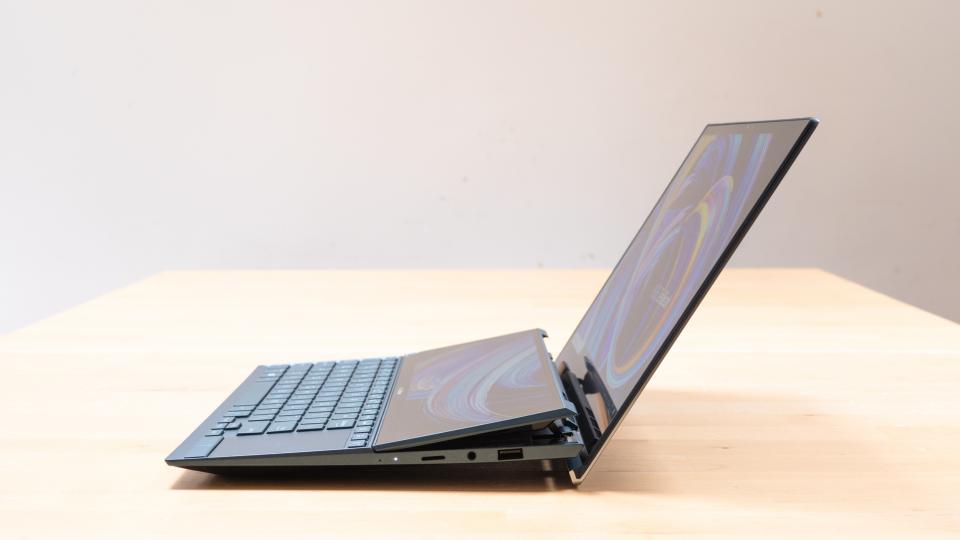 Lever the lid open and the Duo’s party trick slaps you immediately in the chops, with that second display stretching the full width of the laptop’s chassis, just below the main display.

There are a number of things you can do with this display. You can use it to extend your main working area, placing extra applications, Explorer windows or tool panels on it, as if it were a second monitor. It can double up as a giant touchpad – a simple three-finger tap activates this – or you can use it as a handwriting recognition input panel, either writing with your finger or a supported stylus (alas, not included). 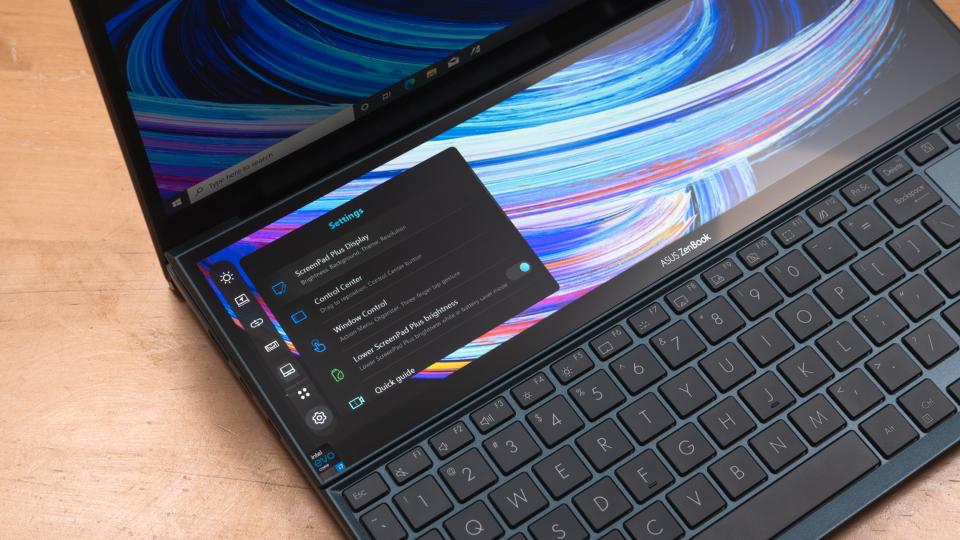 Other features include the ability to set up preset groups of applications and switch between these at the touch of an (onscreen) button; you can also flick applications between the two screens or swap the contents of one with the other.

It’s all useful stuff, albeit not quite as useful as having all that extra screen space in one expanse of LCD. The big downside is that the position of the ScreenPad Plus pushes the keyboard towards the bottom of the laptop and the touchpad to its right. 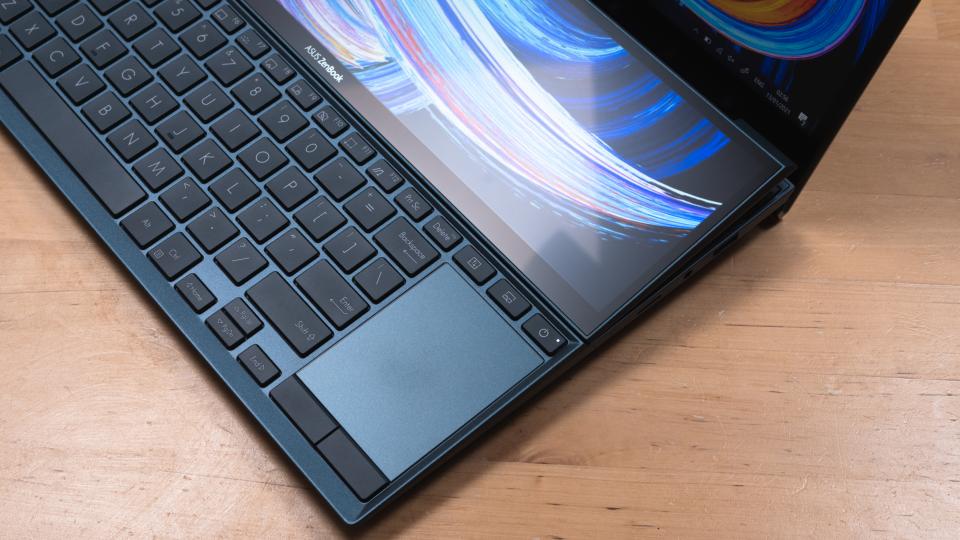 The result is smaller keys than you might otherwise expect on a 14in laptop and a rather cramped feel to the compact touchpad on the right. In particular, I found the positioning of the touchpad and the mouse buttons below it tricky to get used to. With the left button immediately next to the cursor cluster, I found myself frequently dabbing one when I had meant to hit the other.

It’s easier to get to grips with the lack of wristrest and the peculiar forward location of the keyboard, however. The lip of the keyboard sits low enough that you’re not reaching up too far with your fingers and the keys themselves, although a little on the small side, do have a respectable amount of travel and a positive action to them.

While the practical benefits of the ScreenPad Plus are undeniable, don’t expect too much in terms of image fidelity. It’s topped with a matte finish glass that both resists fingerprints and reflections nicely and it’s plenty bright enough (329cd/m2) to match up with the main screen above.

In terms of its colour coverage and colour accuracy, however, it isn’t great. It’s only capable of reproducing 57.9% of the sRGB colour space so colours are noticeably more muted than they are on the main screen. 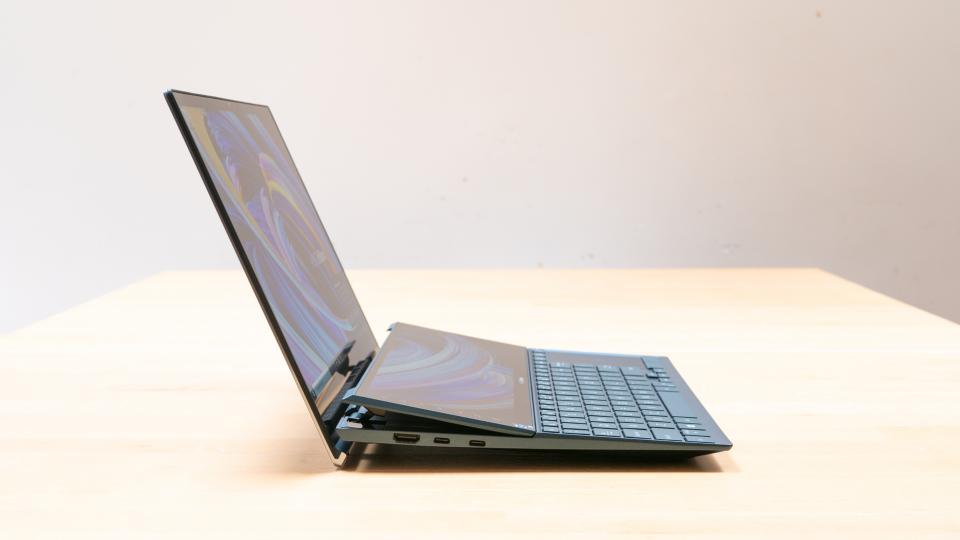 The main Full HD 14in panel is of much better quality. Peak brightness is about the same as the ScreenPad Plus at 335cd/m2 and the contrast ratio is a highly respectable 1,437:1, too. The improvement in colour reproduction is what you notice most, though: sRGB coverage is far higher at 98.5% and the average Delta E colour accuracy of 0.68 is stupendously good.

Alas, the ZenBook Duo UX482 doesn’t play host to the latest high-power, H-series 11th-gen Intel CPUs, nor does it have the new 5000-series AMD Ryzen chips inside like some of the other forthcoming 2021 ZenBooks. Instead, what we have is a choice of either a Core i5-1135G7 or Core i7-1165G7, the latter of which is used here. Performance is solid, rather than spectacular as a result.

In the benchmarks, everything seems to be in order, with the UX483 performing on a par with the most recent Dell XPS 13: 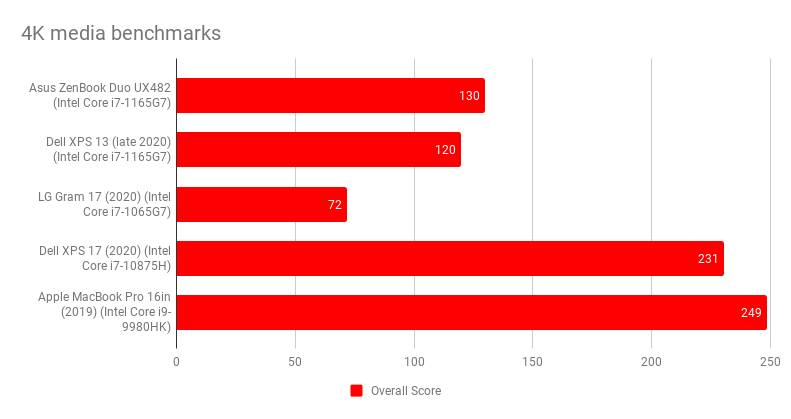 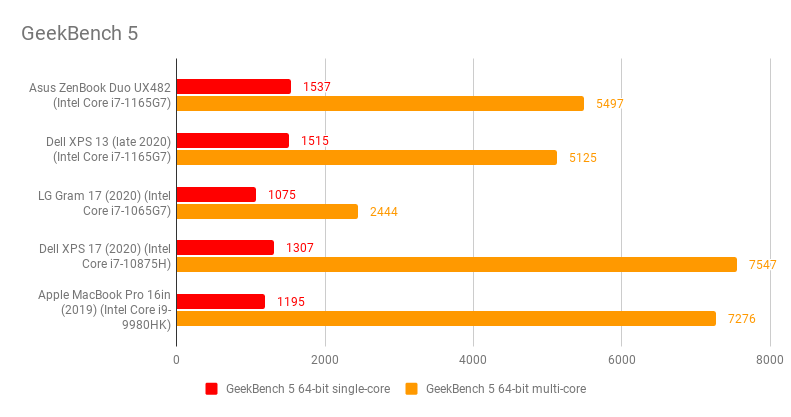 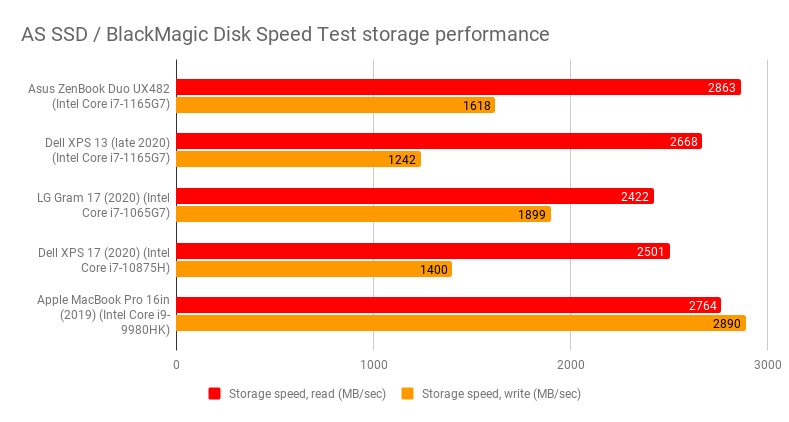 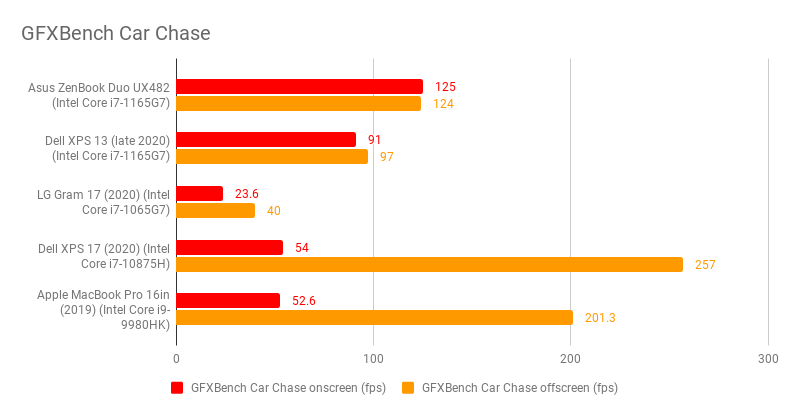 It’s no gaming machine, clearly, although Intel’s Xe Graphics are a big improvement on the previous generation integrated graphics and they work particularly well in the ZenBook Duo. You won’t be running AAA titles at ultra settings but the ZenBook Duo UX482 is powerful enough to run lightweight games and there’s easily enough oomph to cope with most serious creative applications, such as Photoshop or Adobe Premiere Pro.

What’s perhaps most impressive is the machine’s battery life. In our video rundown test with the screen brightness set to 170cd/m2 and flight mode enabled, the UX482 lasted 12hrs 33mins with the second display turned off. This is a best case scenario and, clearly, that stamina will fall if you have the second display switched on all the time, but it’s a great result nonetheless. 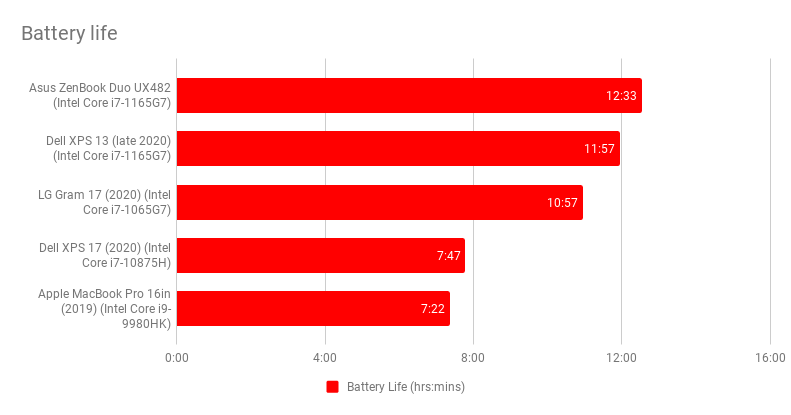 On most of the usual measurements and metrics the Asus ZenBook UX482 is a very good laptop. It has a very good screen, performance is solid and battery life is excellent. It also manages to squeeze in roughly the same amount of total screen space as a 17in laptop into a 14in chassis, which is a feat in itself.

The main question to ask yourself before you commit to buying one is: are you willing to compromise on the usability of the keyboard and the touchpad in order to gain that extra space? While the answer to this question for some of you will be yes – perhaps you’re sick and tired of the same old laptop design and you’re aching to try something new – most, I suspect, will be conservative and spend their £1,500 more cautiously.

There’s nothing else quite like the Asus ZenBook Duo UX482 (apart from other ZenBook Duos) but that will ensure it remains of limited appeal to a niche audience.